Nena von Schlebrügge was a mainly 1960s model who was extremely successful and also has a megastar daughter, Uma Thurman.

Nena von Schlebrügge was discovered as a model in the creepiest way possible. In 1955, no longer content to spot pretty women at parties or in passing on the streets, Norman Parkinson, who was in Sweden at the time, decided to go straight to the source of young girls.

“I have managed to find out the name and location of one of the smartest girls schools in Stockholm, and I’m going to wait outside when the senior girls leave in the evening.” There he saw “a shapeless beanstalk blonde who stood head and shoulders above her rain coated friends”. Apparently, Nena went with the strange man who promised he was a Vogue photographer. Nena was 14.

Baroness Birgitte Caroline “Nena” von Schlebrügge was born January the 8th, 1941 in Mexico City, Mexico. Her mother, Birgit Holmquist, was Swedish and her father, Colonel Baron Friedrich Karl Johannes von Schlebrügge, German. Birgit Holmquist was the model for “The Embrace”, a nude statue by Axel Ebbe which overlooks the harbour in Smygehuk in Sweden.

Friedrich von Schlebrügge fought in World War Two in the cavalry and was a nobleman and monarchist. After the war, he became a successful businessman. But when World War Two came around he refused to fight and also protected Jewish friends. For this, he was jailed and that is when Birgit married him, using her Swedish national privilege to have him released.

The couple immediately went to Mexico which is where Nena and her brother Bjorn were born. Nena also has an older half-sister from her father’s previous relationship. After the war, the family moved back to Sweden. 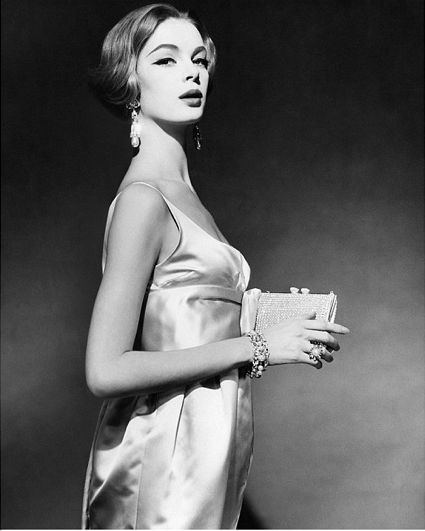 Nena in 1959 as the face of Vogue’s modelling competition. Image via Pinterest. Photographer Claude Virgin. 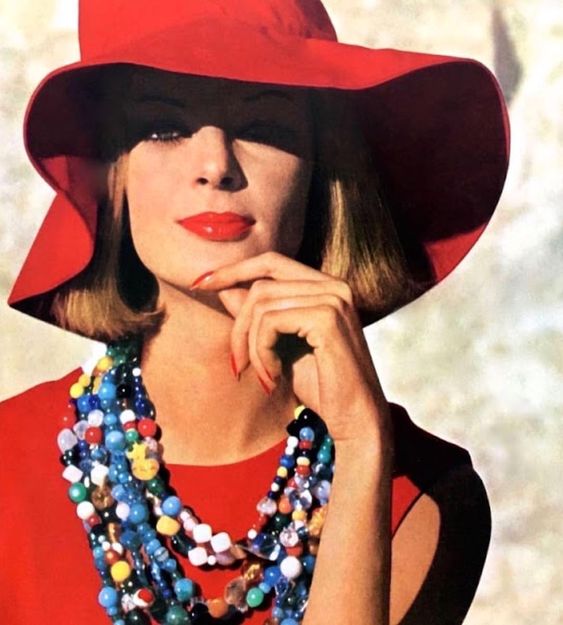 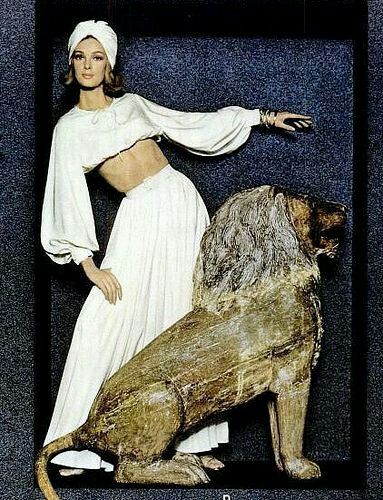 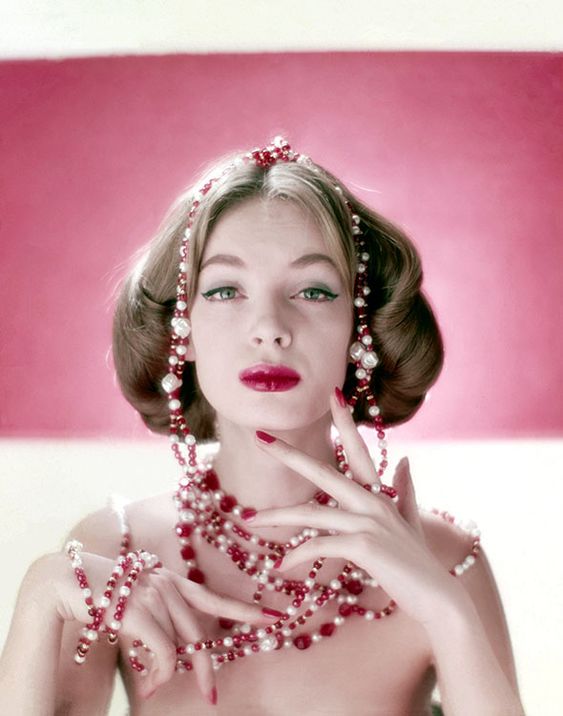 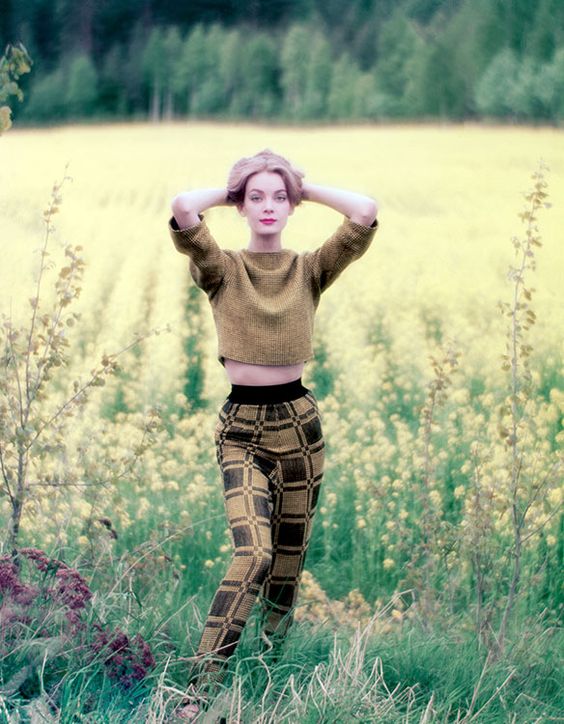 Nena in 1968, photographed for Life Magazine by Norman Parkinson.

In 1957, Nena von Schlebrügge moved to London, England, pursuing success in her modelling career. She found it and Eileen Ford of the Ford modelling agency immediately invited her to move to New York to become part of her stable. In 1958 she arrived on the Queen Mary during a terrible snow storm. It was worth it as she straightaway became a regular at Vogue and Harper’s Bazaar, being photographed by many including Helmut Newton and Gleb Derujinsky .

By 1959 she was the face of Vogue’s annual modelling competition. Vogue itself didn’t seem to think much of Parkinson’s choice, captioning Nena’s photo: “Could this be you? Out of the question, you may think, but when Norman Parkinson first discovered her she was the unsophisticated girl you see pictured here…” The woman pictured is poised and stunning.

Parkinson himself didn’t have much good to say about the “unsophisticated girl” either, since her personal style, like many teenager’s, wasn’t particularly pulled together. She tried for Chelsea Girl and was drawn to hippy styles, “Hover[ing] between the two like some half-filled helium balloon”. She also smoked like a chimney, as did her mother, but at least her mother could cook well, Parkinson discovered. Also, her father was a German Baron, which went down well with him.

Throwing herself into the 60s scene, in 1964 Nena von Schlebrügge married Dr Timothy Leary, in what was billed “The Wedding of the Season”. Timothy Leary was so countercultural I’m surprised that he would get married at all. He was such a star that the wedding was going to be filmed as a documentary. The filmmaker, DA Pennebaker, recorded the preparations, and the guests, who included photographer Diane Arbus, the singer and hairdresser Monti Rock II, and Charles Mingus who played piano at the reception. But Pennebaker forgot to record the ceremony itself, which was fine really because the marriage “was over before I’d finished editing the film.” The divorce was in 1965. The film came out as You’re Nobody Till Somebody Loves You.

Two years after that, von Schlebrügge married Dr Robert Thurman, who was a doctor of Tibetan studies and an ex-monk. She had met him at Millbrook, the manor house where she had married Leary and which was at the centre of psychedelic New York. That year, they had a baby called Ganden Thurman. In 1970, their second child, Uma, was born. After that came Dechen in 1973 and Mipam in 1978. The family was brought up Woodstock, New York, in a house the couple built on nine acres of their own land.

At the Centre of all the Cool Things

In 1967 Nena von Schlebrügge was cast in the film Ciao! Manhattan. It was a scripted film but the actors mainly played themselves. Based on the life of Edie Sedgwick, the film took four years to make. Unfortunately, Nena’s part ended up on the cutting room floor, but the fact that she was invited at all shows she was right at the centre of things. The deleted scenes still exist for posterity though.

Eventually, Nena retired from modelling. Despite his earlier disdain, Norman Parkinson offered this tribute: “She was an exceptionally beautiful girl and however you lit her she always looked wonderful. I do not think many with her innate elegance will appear again – with or without cigarettes”.

Nena’s interest in spirituality abided and in 1986 the Dalai Lama asked the Thurmans to instigate Tibet House US in New York. They built it alongside other devotees who included Philip Glass and Richard Gere. Nena oversaw the program as well as the construction and also initiated the annual benefit concert at Carnegie Hall with Philip Glass and an annual benefit auction at Christie’s. She became the Managing Director of Tibet House from 1991 – 2002.

Since 2001 she has been the MD of a Tibet House offshoot, the Menia Mountain Retreat, a Tibetan medicinal spa in the Catskill Mountains in New York. She is also a psychotherapist and has seven grandchildren.