Dovima was an incredibly famous, incredibly regal American mid century model, the first to become known by a single, memorable name. Her most famous photo is perhaps the Richard Avedon Dovima with the Elephants, shot in a Parisian circus in 1955 and recently sold for more than one and half million dollars. She is another to lay claim to the title of the highest paid mannequin at the time – earning $60 an hour when the going rate was around $25 for other models. For this she earned the nickname “The Dollar a Minute Girl”.

She was born Dorothy Virginia Margaret Juba on December 11, 1927. Her chosen name is composed of the first two letters each of her three first names. Lucky that together they form such a chic moniker! It was actually the name of her childhood imaginary friend. She was born in Queens, New York. Her mother was Irish-born, and her father a Polish-American policeman. At the age of 10 she suffered rheumatic fever, which usually needed a year’s bed rest. Her concerned mother kept her in bed for seven.

Dovima was home schooled and took up painting, which she signed with the name of her imaginary friend, as if it were she and not Dorothy who had done them. Later, when the name was used for modelling, perhaps it was also an imaginary Dovima who was posing in Dior dresses, and not a skinny little girl from Queens. At the end of her life when, broke and working in pizza parlour the local paper interviewed her about her glory days, she said “It always seemed like I was watching a movie. And I’m in the movie. Only it really isn’t me.” 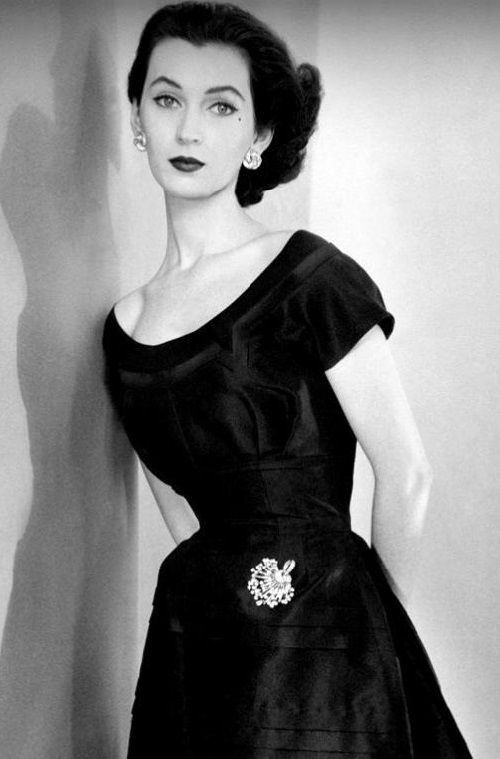 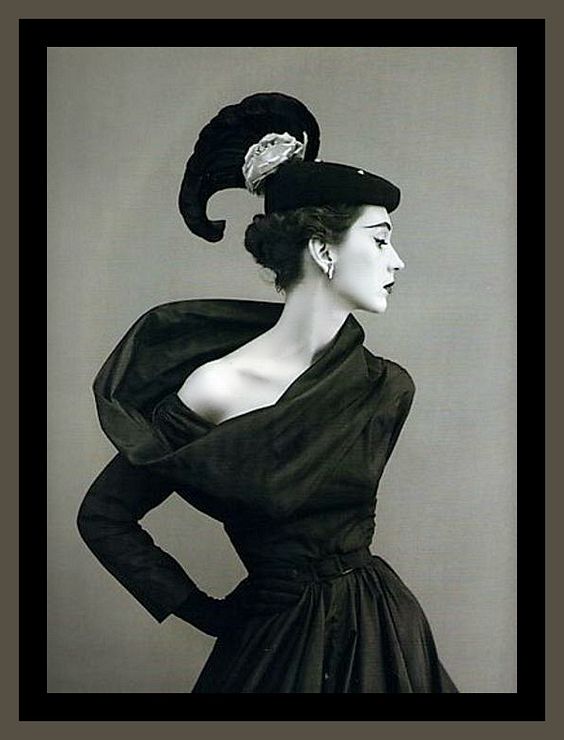 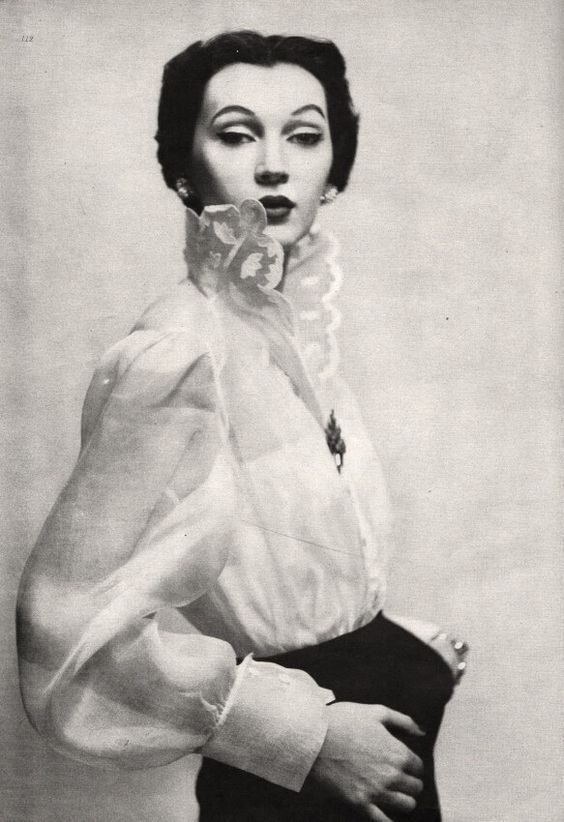 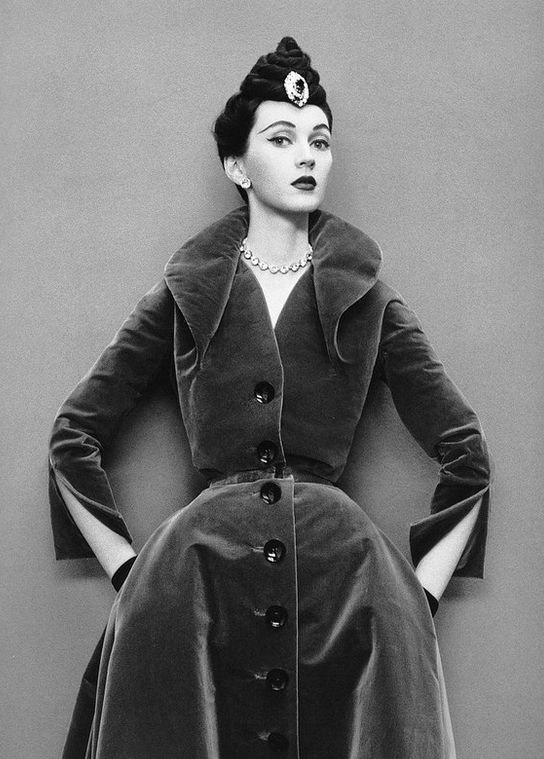 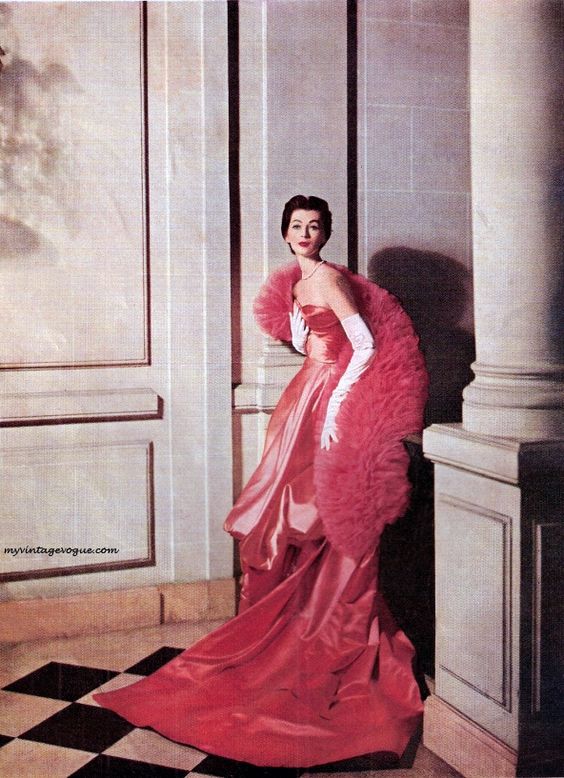 Legend has it that at the age of 20 she was spotted on the street by a Vogue editor, who booked her for a test shoot that afternoon which turned into a booking with Irving Penn the very next day. She was tall and what she describes as gangly, and didn’t think of herself as pretty at all so the suggestion of being a model came as surprise. She also had a broken front tooth, so when she posed she hid it by keeping her mouth firmly closed. The editors raved about her “Mysterious Mona Lisa” look, and within the year she had risen to become the most popular model on Ford Agency’s books.

She was the epitome of that 50s wasp waisted, extremely thin and haughty beauty. Eileen Ford said she looked “as if she could freeze ice”. Henry Clark said she was “panther-like” and Cecil Beaton said that she was “a beautiful giraffe from the suburbs of New York with almond-shaped face, raven hair, turquoise eyes, her face painted so white that her teeth appeared black”. Diana Vreeland was perhaps more cheerful in her analysis. “I think you are a super-duper superstar” said she.

Richard Avedon called her ”The most remarkable and unconventional beauty of her time,”and “the last of the great elegant, aristocratic beauties.” He also compared her to Queen Nefertiti. They worked well together. Dovima remembered. “We became like mental Siamese twins, with me knowing what he wanted before he explained it. He asked me to do extraordinary things, but I always knew I was going to be part of a great picture.”Avedon was one of the first photographers to take fashion photography out of the studio and into ever stranger locations.

The shoot at the Cirque d’Hiver which resulted in that mega million picture was strange and original. Dovima was dressed in the first evening dress that Yves Saint Laurent had designed for Dior. The fashion story, and that picture in particular, was an instant success.

She was married three times. Her first husband was named Jack Golden, who was her childhood upstairs neighbour. When they married, he just moved downstairs one floor and into her bedroom. They split after ten years.

After that came Alan Murray, with whom she had a daughter called Allison. He was abusive. When they divorced six years later, in 1963, Murray bankrupted her. He also called the police on her, claiming she had kidnapped her daughter, and she was arrested. Her last husband was a bartender called West Hollingsworth and they were devoted to each other until his death from cancer only three years later.

In 1962 at the age of 35, Dovima left modelling, saying ”I didn’t want to wait until the camera turned cruel.” It was the sixties and the fashion in modelling had turned from haughty women to girlish ingénues, like Twiggy. But Dovima was still stunning and it may have been that her husband, whom she was to divorce a year later, had robbed her confidence.

Her journals were full of accounts of violence and abuse from him and other men too. After that she had several very small roles in TV and film, including a small part as a model in Funny Face. Then she retired from in front of the camera in 1972. She then tried setting up an agency, which failed, before a job as a talent scout and finally leaving New York altogether and moving in with her parents who had retired to Florida. She had to take odd jobs like working at the cosmetics counter or serving pizza.