Renée Breton (born 1928) was a house model for Christian Dior, one of his favourites and the closest any woman could come to his fantasy ideal. She was petite, with a pretty, heart shaped face, and embodied French beauty in the mid century years.

She started working for Dior in 1947, at the age of 19. She was one of the very first of his house models as he set up the business and made a splash with his “New Look”, and would certainly have been modelling that contentious collection which gave the press and the women of Paris so much to say at the time. Some loved it as a breath of fresh air, some hated its restrictions and considered it was bringing women back in time. 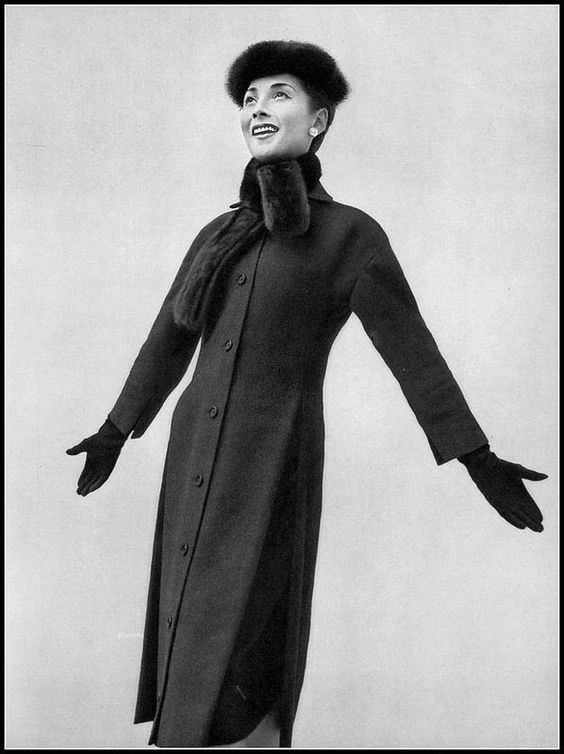 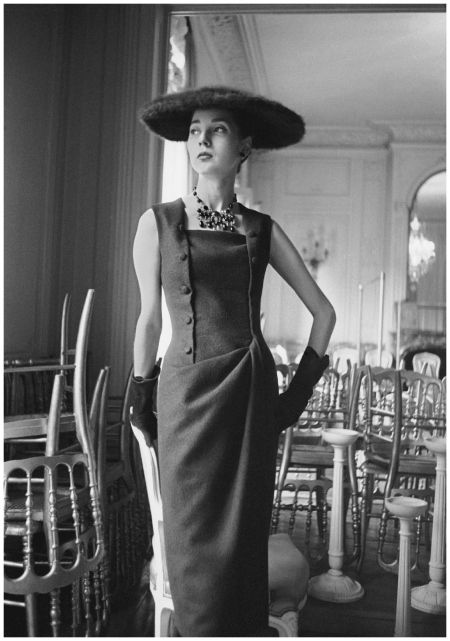 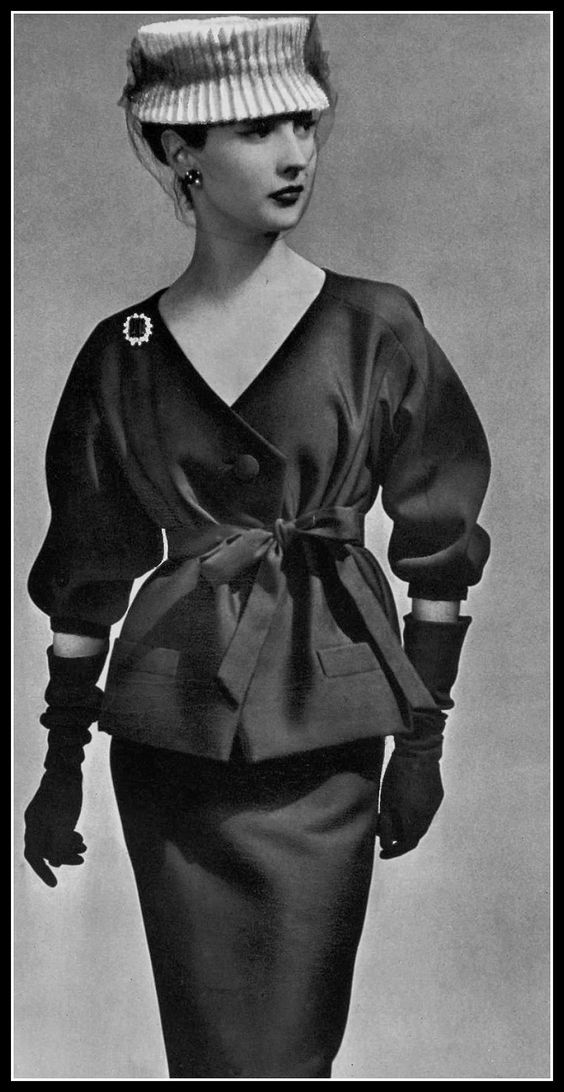 In Dior, photo by Louise Dahl-Wolfe, 1956. Image via Pinterest.

A house model’s job was to put on a selection of clothes to show clients who came to buy from the house. They also modelled for the twice yearly fashion shows. They didn’t have to be pretty, as models are today, (in fact, Balenciaga’s house models were particularly known for being matronly of figure and faintly terrifying of face) and in 1947, just after the war and its attendant lack of food, being skinny was a given.

She also wasn’t a society girl, modelling by day and given free clothes to wear to wild parties by night to further advertise the brand. In fact, every day she arrived at work, took the same dressing table in the changing rooms, went through the daily routine and after work she took off the fairy tale creations, put her own, rather boring clothes back on and caught the bus home to her apartment. She didn’t like to take holidays or travel far from home. But Renée Breton particularly caught Dior’s eye.

“Of all my mannequins” he explained in 1956, “Renée is probably the one who comes nearest to my ideal. Every dress she puts on seems to be a success, as though there existed an exact equivalence between her proportions and those of my imagination. She brings fabric to life so exquisitely that her face is lost. As she shows her clothes, distant, aloof, it seems as if her very life centres around the folds of the material.”

Which seems like a shame, because that face was such a sweet one. Never mind, because photographers came to appreciate her too. By the time Dior wrote that, Renée was the most famous French model in the world, playing up her tiny bird like charm when strapping American models like Mary Jane Russell and Barbara Mullen came to shoot in Paris.

Renée herself travelled very infrequently, so the American models had to come to her, not vice versa. A rare foreign tour found her promoting Dior’s clothes to the American press in 1957. In the company of the couturier himself, she had very little to say. “He’s very kind” was her only response to their questions. Renee in the Dior suit. Photo by Willy Maywald, image via Pinterest.

Probably the most famous picture of Renée Breton is on a cobbled Parisian street, wearing Dior’s “Bar suit”. Worn with a straw hat and black pleated skirt, the white jacket is padded at the hips, nipped at the waist and Renée wears it awkwardly, standing like a doll whose arms have been bent to strange angles. This photo, by Willy Maywald, has generated intrigue and even controversy in the fashion history community.

The Bar Suit was designed in 1947 and scholars originally thought the image came from that year, since Renée Breton was modelling for Dior then and Willy Maywald had photographed her in his creations around that date. It turns out that this particular version of suit, now in the collection of the V&A, was made in about 1955 for a lecture tour given by Dior. It has subtle differences from the original, such as the number of buttons.

The suggestion is that Renée modelled it for the photos after the tour, and a tentative date for the photo is 1957. This all means two things: the first is that Christian Dior, in his lectures, fully acknowledged the impact his first collection had on his legacy from a distance of only eight years, and it’s not just us looking back seventy years and with the benefit of hindsight who can see that. The second is that it seems it was impossible for even experts to tell that Renée was ten years older in the picture than they had judged. She must have been extremely youthful looking to appear as a 19-year-old when she was 29.

Christian Dior died in 1957, and Renée was in America when it happened. He had already appointed his successor, Yves Saint Laurent, and though there wasn’t a change of staff at the House of Dior and most models continued as normal, Renée just didn’t fancy it. “I felt I could not go back.” she said. “I loved M. Dior. It would be different without him.”

Instead she headed for New York and signed with the Ford model agency. She became very popular and well paid for both catwalk and photographic assignments. But there was always a little regret for her old life in Paris. “Of course, chez Dior I made less money.” she acknowledged. “But the work took not so much time …”

In 1959 she married a successful hotel manager, but, fairly unusually for the time, continued to work. For the next few years, she continued as a model, and as the bookings faded she became a sales manager for fashion brands, including an independent designer and at Saks Fifth Avenue.