Anne Gunning was a supermodel of the 1950s, whose face was both beautiful and expressive. Even when performing the haughty poses the photographers of the period demanded, her face still bore a faint half-smile.

She had dark hair, green eyes and pale skin. She had started her career as a film actress, but ended it as a top model who was photographed for Vogue by all their best photographers. 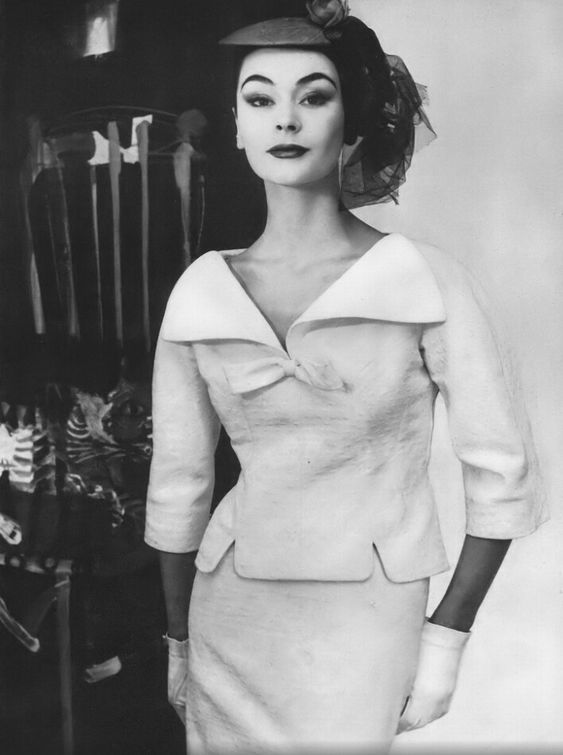 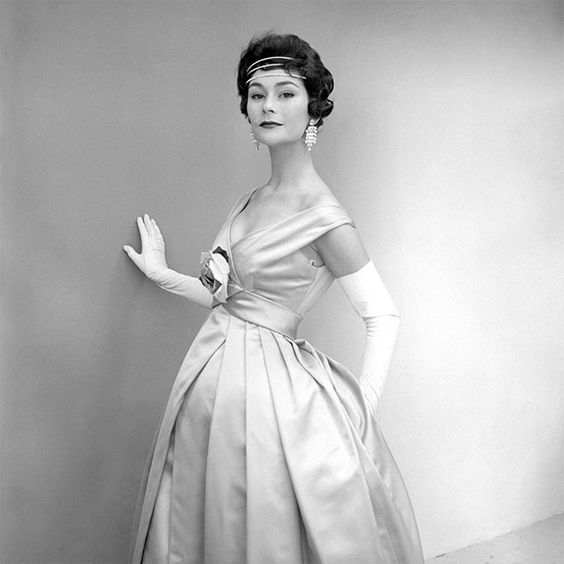 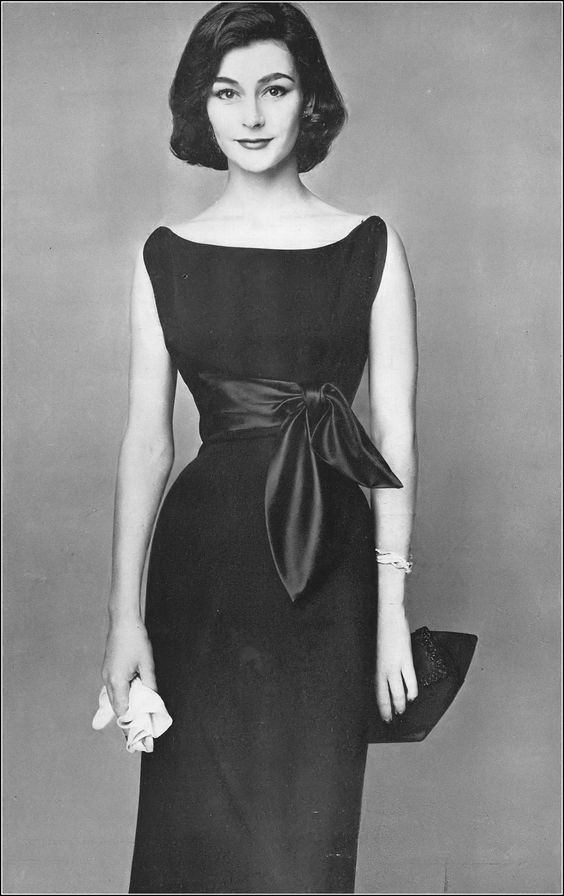 Anne Gunning Parker was born in 1929. Her father was named Arnold Barthrop Parker and Gunning was brought up in Southern Rhodesia, where her father was a coffee planter. He was from Sussex and her mother was raised in Belfast. When her parents split up, Gunning was shipped home to the UK where she was brought up by an aunt. The family was directly descended from the 18th century legendary beauties the Gunning sisters, who were painted by Joshua Reynolds and Gunning was very proud of this fact.

She studied at the famous The London Academy of Music and Dramatic Art and whilst still at LAMDA won the 1949 London Films Cup for acting talent. On the strength of this she was signed up for a ten-year contract with Rank. The press described her as a “taller edition of Vivien Leigh’. She took small roles in romantic comedies, appearing in ‘The Gay Lady’ (1949), ‘Helter-Skelter’ (1949) and Noël Coward’s ‘The Astonished Heart’ (1950).

Her one main role was in 1950, in ‘Portrait of Clare’. She played a tragic widow but the film wasn’t a success, dismissed as slow moving. Anne Gunning’s own notices were mixed. “Certainly she is of a beauty calculated to disturb the even tenor of the thought and make the heart go pitter-patter of any middle aged gent.” But her acting talent didn’t seem to stun anyone. Her next (very small) role was not until 1959, playing a beautiful yet distant woman in ‘Room at the Top’. 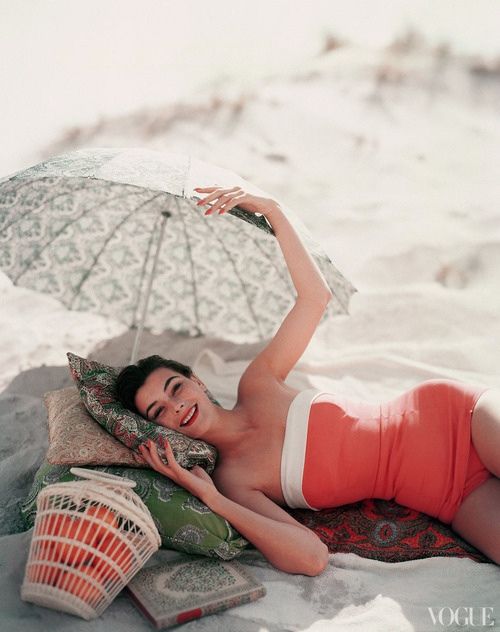 In 1948, she met the photographer Henry Clark in a restaurant on King’s Road. “I started bang off. No training, no model schools. And this was really due to meeting Henry (Clark) and Dick (Dormer), being taken up by these very, very good photographers. I didn’t have to do that awful thing of taking my photographs around and knocking on doors for work. I could never have done that.” Her career in modelling was, at first, in addition to her acting work. Gradually it superseded it.

Vogue loved her. “She rides, she swims and dances but follows no slimming or maintenance diet… She liked to have an inexpensive boneless roll-on but wears a made-to-order brassiere and waspies from Rigby and Peller.” But Gunning herself admitted “I smoked and drank a bit, and occasionally got podgy, but I was awfully shy, unlike Barbara – she was always out at social gatherings and nightclubs, but she talked about it!” The Barbara she was referring to was Barbara Goalen, one of her main rivals. After Goalen retired in 1954, Gunning became her replacement for many jobs and her career went stratospheric.

In 1953 Anne Gunning had appeared on the cover of Life Magazine in a Sybil Connelly cape and gown, shot by Milton Greene in picturesque castle ruins. Suddenly, she was everywhere and on every cover, with advertising contracts and top photographers vying to capture her.

In America, she was on the books of the model agent Eileen Ford, who praised her “Withdrawn, Garbo-like quality”. John French had a similar opinion. “Warm yet remote, her incandescent beauty glows in a camera lens. But she keeps the secret of her smile.” 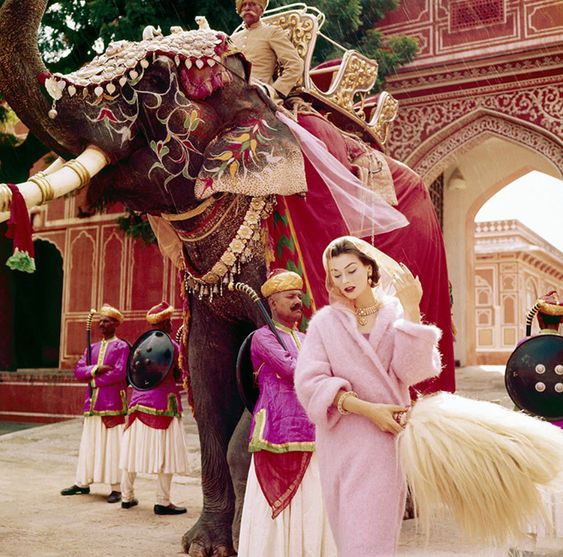 In India. Photo by Norman Parker. Image via Pinterest.

In 1956, she went with Norman Parkinson and Barbara Mullen on location to India. There in perhaps her most famous photo series today – and, I think, Norman Parkinson’s –  she posed among elephants, temples and street life wearing Christian Dior, Susan Small and Horrockses gowns.

The colours of the series are particularly notable. Anne Gunning wears a pale pink coat layered over a peek of rich pink which exactly matches the uniform of the guards of the City Palace, Jaipur. Her gold Indian jewellery matches the accents of the guard’s turbans.

In another shot, she wears a white lace dress dress and stands against carved white marble. In a red and white full skirted gown, she sits in a canopied litter painted the same colours, and, her slender figure in a sheath dress, she echoes the columns she stands against in front of Mylapore Temple.

The shoot is a success not only for its beautiful locations and light, but because of the women in the photographs – not only beautiful and with the requisite figures but relaxed, engaged, enjoying the surroundings and perfectly elegant.

As well as magazine shoots, she also had lucrative contracts for advertising, working with many companies including Hermes and Sears. Although she was photographed for magazines so many times, she only ever did one catwalk show, for Sybil Connolly. She was afraid of tripping and falling, and nervous of the huge audience watching.

Based in London, Anne Gunning regularly travelled to Paris and America. On one of her assignments in America, Gunning met the superstar fashion designer Oleg Cassini who was to become even more famous when he dressed Jackie O in the 1960s. They had a long distance relationship. Later, she was to have a long term relationship with Colin Tennant, the aristocrat famous for partying with Princess Margaret and Mick Jagger. These relationships absolutely delighted gossip columnists all over the world.

In May 1961, Anne Gunning married the politician Anthony Nutting. When he succeeded his father as Third Baronet she became Lady Nutting. The press were wildly excited about the match and profiled her anew. “She has been everything that girls dream about when they dream of becoming top models,” they gushed. After the wedding, Gunning retired from modelling.  The couple didn’t have any children and remained married until Anne’s death.