Matilda Etches was the beautiful and unconventional creator of beautiful and unconventional couture clothes in mid-century London. Her theatrical outfits attracted clients like Dame Margot Fonteyn and Vivienne Leigh. She was a well known personality and designer in 1940s London, and regularly featured in articles in Vogue and in the widespread press. 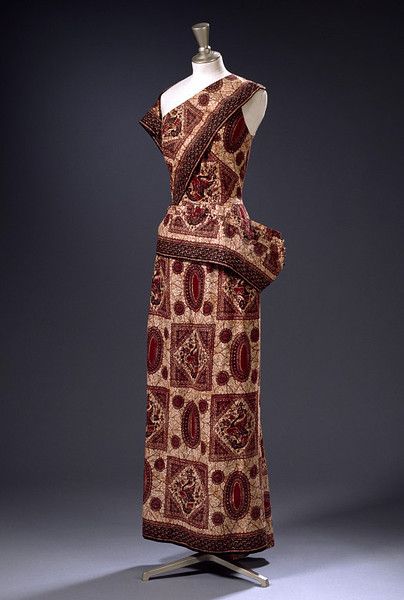 The West African Dress. Image via Pinterest courtesy V and A. 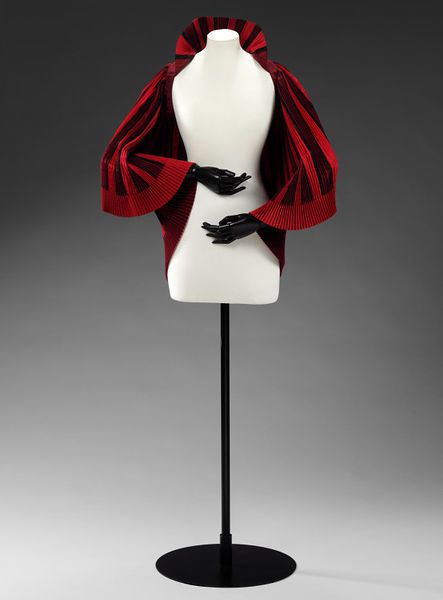 Butterfly evening cape. Image via Pinterest courtesy of V and A. 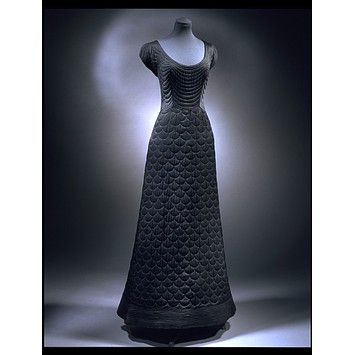 Evening Dress by Matilda Etches, 1947. Image via Pinterest courtesy of V and A. 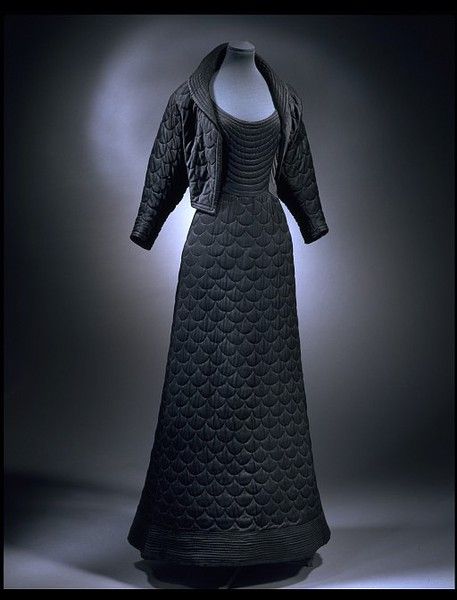 And with its jacket. Image via Pinterest courtesy V and A. 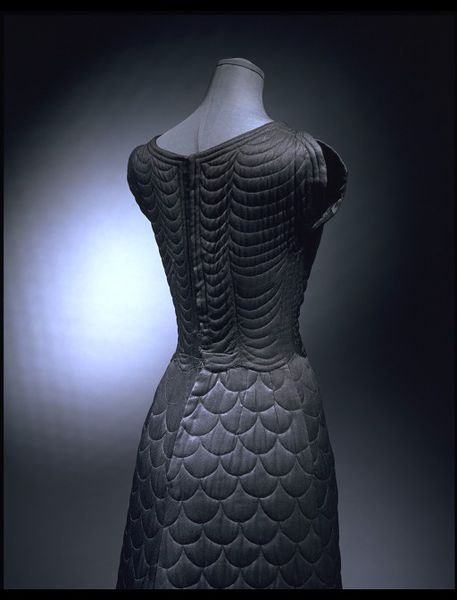 Detail of the dress back. Image via Pinterest courtesy V and A. 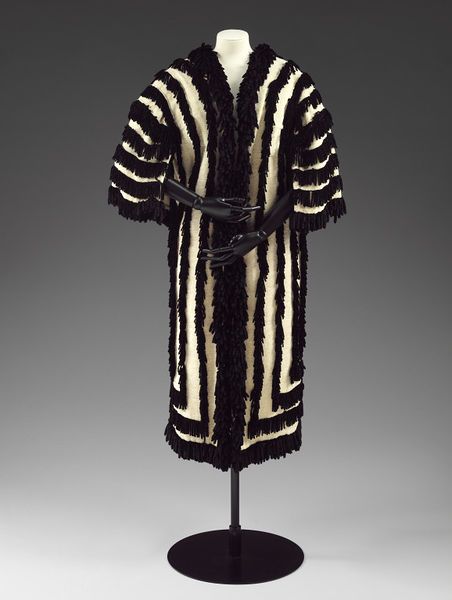 An Evening Coat by Matilda Etches. Image via Pinterest courtesy of V and A.

Born in Yorkshire in 1898, Muriel Matilda Etches’ mother was Agnes Helena Woollen, (married name Etches) and her father, who served in The King’s Own Yorkshire Light Infantry during World War I, was called Charles Thomas Watkins Etches. Matilda was an only child. The family emigrated to Montreal, Canada, when Matilda was seven. She returned to Britain and settled in London just before the second world war.

Matilda did not receive training in dress design or even in dressmaking, but cut and draped designs directly on the dressmaker’s dummy. She never even made a sketch. However, she had always dressed distinctively and elegantly, and made her own outfits to her own designs from a young age. When she toured Australia in 1946 to promote the textile designs of Ziker Asher more column inches were devoted to her appearance and outfits than to the fabrics.

She opened her own atelier in 1935, although it was dissolved soon after. The reason she started her own business was because, without qualifications or working her way up through the ranks, or a portfolio of fashion drawings, although fantastically skilled, she could not find a position in an established couturier’s workshop.

By 1937 she had a new atelier, and this time the business remained open and a success. It was in Frith Street, “over an Italian Restaurant in the slummiest part of Soho”, according to a magazine article about her a decade later. Her first collection was in toile form only, and she invited her clients up to see them and then have their chosen design made up in any fabric they chose.

Matilda also went on to work for ballet and theatre. Working under the workshop head Sophie Fedorovitch, Matilda would take the sketches she brought her and fold and drape the cloth until it resembled the design in the drawing. Sometimes this would be on a dress dummy, sometimes the costumes were fitted to a live dancer.

“Sophie would bring her sketches… I would fold or drape a load of stuff until the mood and feeling of the sketch was captured. At the fittings the methods would always be the same. No sooner would the costume be on the dancer then Sophie would say in her gruff voice: “Move”. The dancer would move, lengths of diaphanous stuffs trailing to the floor and pins dropping.”

She also costumed for films. Her official credits list only four, but the actual count is far higher. One of them, Gaiety George, was made in 1945 when rationing was still in full force. It was a period musical and the film studios just could not get hold of appropriate fabrics for Etches’ designs. And appeal in the Daily Mail brought in hundreds of donations of old clothes from the public in fancy fabric, which was unpicked by the costume team and re-made into film costumes.

Step-out and Stay Out

During the war, Etches stuck it out in her atelier though the bombs were falling. She designed the “Step-out and Stay-out” suit of 1941 in response to the Blitz so that party-mad London need not stay at home in case of an air raid nor find themselves sleeping on an underground platform while sheltering from bombs in an evening gown. Her solution was a black wool pyjama outfit with an overskirt and jacket which featured practical zip pockets, an unusual closure at that time.

One of her most impressive gowns, which is now in the collection of the Victoria and Albert Museum, is inspired by traditional African sarongs but with a very Western couture construction. Made in 1946, it uses a cotton made in Manchester to imitate Indonesian batik intended for export to Africa. The border, however, spells out “V for Victory” in Morse code. The dress looks like it is merely wrapped around the body yet every pleat is stitched in place and the underlining reveals a foundation of boning, stay tape and hooks and eyes.

In 1969 this gown, along with a few other pieces, was donated to the V&A by Matilda herself, to the great delight of the first Curator of Dress and Textiles, Madeline Ginsberg. She wrote to Matilda that “The image of our 20th century costume collection has been given a great boost through you!” Madeline added that they would be showing it, along with Matilda’s Butterfly Cape, to the advisory committee to whom they normally only showed exquisite Medieval embroideries.

In 1918 at the age of 20, Matilda married Robert Bamford, an engineer who founded the company which would become Aston Martin. They had one child, called Patricia Bamford. Robert died in 1942. In 1950 she married Paul Homan. He was the former economic advisor to President Truman. When he became the Professor of Economics at the University of California, she went with him to continue her career in the States. He died in 1969 and she returned to England.

Matilda Etches died in 1974 in Brighton. In his obituary for her, Cecil Beaton said: “Matilda Etches Homan, that beautiful moth-like creature, has left us. Her death has robbed the world of theatre, cinema and ballet of one of its rare talents, and has filled friends and admirers with deep melancholy.

Matilda, always calm and serene as a designer had a special and personal gift, and as an interpreter of the costume sketches of others she worked selflessly with the same delicate flair, enthusiasm and sensitivity[…] everyone that worked with her[…] knew the joy of being able to rely on her taste, dexterity and tact.”