One designer that created waves during the fifties was Norman Hartnell. Here was a designer that had been around in each decade from the 20s right up to the 70s, but it was the early fifties when he was thrust into the limelight as couturier to the royal family.

The fifties isn’t necessarily everyone’s favourite decade and not as grey as you’d think, but it’s hard to compete with the 40s that came before it and the 60s that followed, and therefore it’s sat between the 2 decades, a grey shadow of the post war period – no money, fashion merely an extension of the 40s, and grey suits.

But the nineteen-fifties was a time of change, as people gradually came out of the post war period, the economy boomed and the birth of the middle classes created a new suburban living. Technology started to get interesting, and fashion started to become more adventurous,with new designers using new materials and fabrics and creating more daring and colourful creations.

The arrival of Norman Hartnell

The royal family and the Cambridge Footlights

Norman Hartnell started designing clothes in the early twenties, when he started working for a London dressmaker in 1923. Shortly after this he opened his own business and would show his new collection in Paris. He started making clothes during his time at Cambridge, creating costumes for his peers for the Cambridge Footlights.

His dresses would often be given names especially during the twenties and thirties. He was renowned for making gowns and this would catch the eye of the future queen.

Norman Hartnell – Couturier to the Queen

Norman Hartnell’s success was sealed once he became couturier to the royal family, becoming the Queens dress designer and commissioned to design the queen’s wedding dress and then her coronation gown. Her dress was exquisite with over 10,000 pearls and beads and a star patterned train. 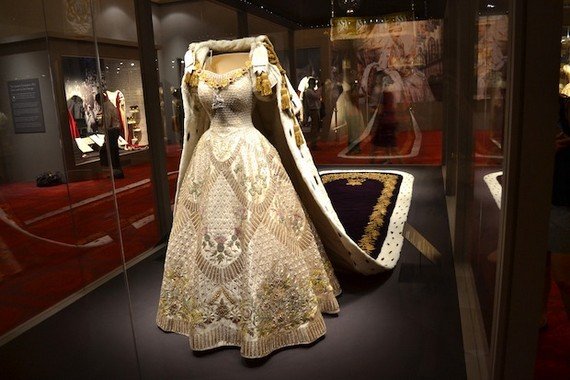 Her coronation dress would exceed all expectations in 1953 and took nearly a year to make. Three dressmakers were used and six embroiderers borrowed from the Royal School of Needlework.

The silk used for the gown was taken from the silk farm at Lullingstone Castle and if that’s not enough the embroiderers were kept busy embroidering emblems from Great Britain and the Commonwealth on to the gown.As a result of his work with the royal family he would go on to be knighted, the first couturier to be have this honour.

Although Norman Hartnell was famous for his gowns – he worked well with suits and coats, creating uniforms for both the military and the Red Cross. In the sixties he brought back the double breast jacket, a popular favourite today.

Norman Hartnell’s gowns were so popular they were sought after both abroad as well as in the UK. He used beautiful fabrics and brought a certain respect to English tailoring and cutting. Famous favourites were Vivian Leigh and Marlene Dietrich who adored his creations, while Noel Coward favoured his suits.

Norman Hartnell also designed jewellery and his pieces were as ostentatious as his gowns, with ornate embellishments and colours. They are as sought after today as they were in the 50s and 60s.

The House of Norman Hartnell

Norman Hartnell died in 1979 although the House of Hartnell remained open until 1992. A succession of designers followed after Hartnell’s death including Victor Edelstein and Marc Bohan.

Today, many of Norman Hartnell’s designs are held in museums both here and in the US, and his jewellery is an exquisite addition to any contemporary outfit today. If you are turned on by 1950s vintage fashion, then take yourself on a treasure hunt and seek out some Hartnell creations. Study his style online, and once you are fully knowledgeable on his designs, pound the pavements and the internet. They can be easily matched with modern, contemporary accessories and give a sharp and dramatic look to any 50s fan.

Hartnell at work in his London studio during wartime 1939,source IWM

The workrooms of the fashion designer Norman Hartnell in London,