Not long ago a friend bought a new blouse from a smart high street chain. She paid over a hundred pounds for it, and it looked very nice. When she got it home, she was disappointed to find that it wasn’t, as it appeared, silk, or even, as I suggested, Tencel – bamboo rayon. It was nylon. Nylon hasn’t got the best reputation any more. It’s not breathable, made from petrochemicals, and used generally in cheap clothing. Though on the upside it stays bright and cheerful, and is easy to wash. But in the 1950s, when it first came out, it was a fabric so magical it was used in couture collections. It could be stiff yet gauzy, and hold a crisp fold in ways that natural fabrics could not. In fact, designers experimented with glee with all kinds of manmade fabrics, and shouted the fact from the rooftops. 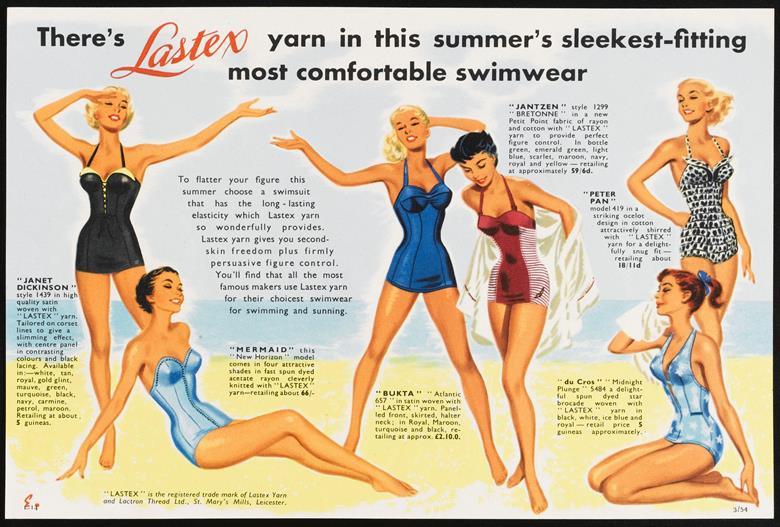 One of the first artificial fabrics to be developed, in the 1890s, was art silk. Initially it wasn’t celebrated. I can put it no better than the words of Madge Garland in her book “Fashion” of 1962: “For a long time “art silk” was as repellant as its title was vulgar; it was harsh to handle, had a sleazy surface, and creased abominably. Nevertheless it was the rude forebear of the delicious materials which have transformed women’s clothes today. As technical difficulties were gradually overcome the surface glistened less sweatily, the colours were not so harsh, the creases not so indelible, but it had started at the bottom of the trade.”

Interesting to note that today, art silk, which changed its  name to “rayon” and later “viscose” to avoid its former reputation, is now undergoing an attempted renaissance. It is made from cellulose, taken from wood or bamboo pulp. As such, although it does require chemicals to break it down and re-form it, it is a natural product and will biodegrade. Also, I have never thought that “Art silk” was a vulgar term, but that’s because I never thought it was short for “artificial silk”, but “Artistic silk”.

Other inventions followed. Riplette, which could be left to drip dry and didn’t need ironing, came out in 1910. Courtauld made a fine knitted fibre tricolette in 1919, and a fabric called “Courgette” in 1932. DuPont invented Lastex, forerunner of Lycra, in 1938 along with an uncrushable rayon the same year. Nylon fleece, friend of hikers everywhere came out in the early 1940s, and shiny Lurex gold thread in 1947.

The Inventiveness of War and its effect on couture fabrics

The shortages and restrictions caused by WW2 forced fabric manufacturers to invest in chemists and lab experiments. Madge Garland again: “They created synthetic materials which were literally miracles of ingenuity. So magnificent were the satins and taffetas seen in Paris immediately after the war that it was difficult to believe they were not real. Their delicate hues and excellent “handle” endeared then to all designers, many of whom wondered if they would ever go back to the ancient triumvirate of silk, wool, and cotton. They never have.” 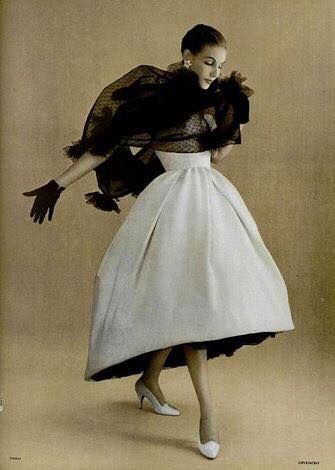 Couture man-made fabrics were used for this Dior ensemble. Image via Pinterest.

Perhaps it might be a surprise to learn that Christian Dior really embraced new fabrics. Many of his designs and ideas of the ideal woman were such old fashioned throwbacks. But the petticoats of his most famous line, the “Corolla”, needed to be made of nylon to be light and fluffy but stiff enough to stand away from the body like that. His Trapeze and A Line couture dresses were also made from crisp artificial fabrics. They kept the architectural silhouettes he was looking for without drooping or loosing their soft pleats and folds.

a Schiaparelli and her Couture Cinderella OutfitElsa Schiaparelli was a more unsurprising adopter of the artificial fabrics for couture. She used “Treebark” rayon in 1932, which had a crinkled appearance of permanent pleats very like the silk fabric invented by Mariano Fortuny. In 1935, she made a “glass” dress, complete with “glass” slippers. It was completely transparent and made from a kind of Cellophane. The milliner Agnés made a turban from the same material. Those fabrics were not really practical for clothes, but did become fashionable in handbags and evening shoes.

In 1960 Nina Ricci experimented with an uncrushable blend of alpaca, nylon and silk made by Sekers to create more uniform permanent pleats. The combination of man-made and natural fabrics had ben seen before, which, although against the bible’s advice, did give the best of both worlds. 1957 saw light and fluffy, though difficult to tailor, mohair, mixed with a firm weft of nylon. Couture designer Lanvin made coats out of it. They were such a sensation that they had to make up repeats of order 72 times in its first week. Orders came for the new fabric, made by Ascher, from all over the world. It launched the fashion for mohair that lasted well into the 1960s.

Nylon – a Revelation in Lasting and Laundering

Drawing on the lines, when no nylon was available. Image via Jezebel.

Finally, nylon, which I have so disparaged above. In the 1940s, there were no tights. Instead, to keep legs warm and clothed, stockings were worn. They were made from silk or wool, and had a seam down the middle of the leg. Silk looked great, but laddered easily. Even though it was so fine and fiddly, these ladders were usually repaired by the wearer or specialist services. Silk stockings were too expensive to be thrown out when they were damaged. During the second world war, supplies of silk stockings just about ran out in Britain. It wasn’t decent to go about with bare legs. So women painted dye or gravy browning all over their legs instead, drawing the “seam” on with eyebrow pencil. Apparently you got used to the smell.

However, along came American soldiers with plentiful supplies of nylon stockings instead. They hadn’t reached us yet, though they were manufactured in bulk in the US in 1939. It was a wonder material, much less likely to run or ladder. Ironically, given stockings were necessary for decency, some women swapped sex for stockings. In 1951 much thicker, more opaque 60 denier stockings were developed, and in 1952 manufacturers achieved seamless stockings. These were not particularly popular at first, as the whole idea was to visibly clothe the leg, and they made it look like you had nothing on all over again!

Nylon was also used for couture blouses, underwear and nightwear, keeping its frills and furbelows excellently. It was also so easily washed that a woman could wear clean clothes every single day. Even a woman who lived in London, the dirtiest of cities, and travelled on buses, could wear gleaming white and pretty pastels for her every day work clothes, hitherto avoided as they showed the dirt.