Nina Ricci – “The White Lady of Fashion” was born Maria Adélaide Nielliin Turin, Italy in 1883 but became a Paris couturier whose name, synonymous with refined feminine grace and elegance, continues to this day, chiefly in her perfume range and especially the ever popular “L’air du Temps”.

Maria, who was always nicknamed Nina, began sewing as a child making little dresses for her dolls. She moved, with her family, to France at the age of 12 and at 13 began an apprenticeship with a dressmaker’s. At the age of 18 she was promoted to head of the workroom, where she began creating her own designs.

Because of her background in sewing, she knew how to construct clothing, and never designed a gown with a sketch – she modelled directly on the live mannequin, cutting and pinning to fit the contours of the body. As a result, her designs were famous for their flattering fluidity and perfect, graceful flow.

At the age of 21 in 1904, Nina married Luigi Ricci, an Italian jeweller and composer, and they had a child called Robert in 1905. 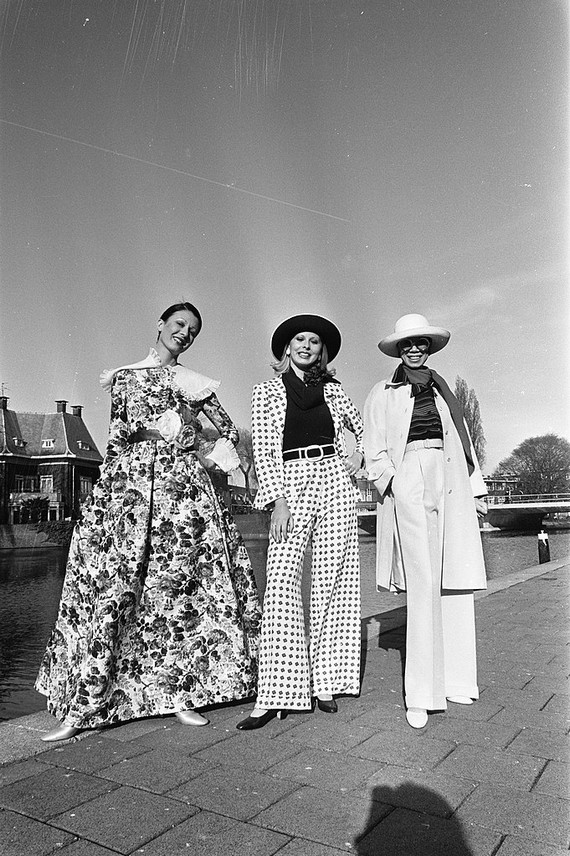 In 1908, Nina Ricci got a job as a designer with the House of Raffin. She worked there for 24 years. But Robert, her adoring son, was not content to see his mother waste her skills anonymously working for someone else for her entire life. He encouraged, even insisted on her setting up her own brand, and finally, at the age of 49 in 1932 they did it together.

Nina was in charge of designing the collections, and Robert focussed on the business and advertising. Although it didn’t have an international profile, it became successful in France very quickly, catering to mature and elegant Frenchwomen, and providing coming out dresses and trousseaus to the chicest of recently married fashionistas.

Nina Ricci’s publicity photographs, from the very start, show her with white hair piled regally atop her head. Her ever-present neat strands of pearls and milky complexion completed the look that gave her the name “The White Lady of Fashion”. Because she was married to a jeweller, she was also always draped in lavish jewels.

Beginning with only one room, the Nina Ricci business grew rapidly. Soon, the House of Nina Ricci had eleven floors over three buildings, and hundreds of employees.

During the Second World War, French couture found itself in a difficult position. France was occupied by Germany, who demanded its finest products. Should designers produce couture for Nazis, measuring up the wives of the enemy for exquisite gowns whilst the French population suffered food shortages?

Lucien Lelong, the head of the Couture Association, reached an agreement with Hitler that yes, they would. After all, he argued, thousands of needlewomen across Paris depended on the job. Many citizens of Paris maintained that their finest export should not collude, no matter the cost. Couturiers should close their doors until France was free again. Nina Ricci’s solution was to stay open in accordance with Lelong’s ruling and make couture for whoever requested it, German or French: but in her own way. The Nina Ricci collection for 1940 was in red, white and blue – resoundingly the colour of the French flag.

The Little Theatre of Fashion 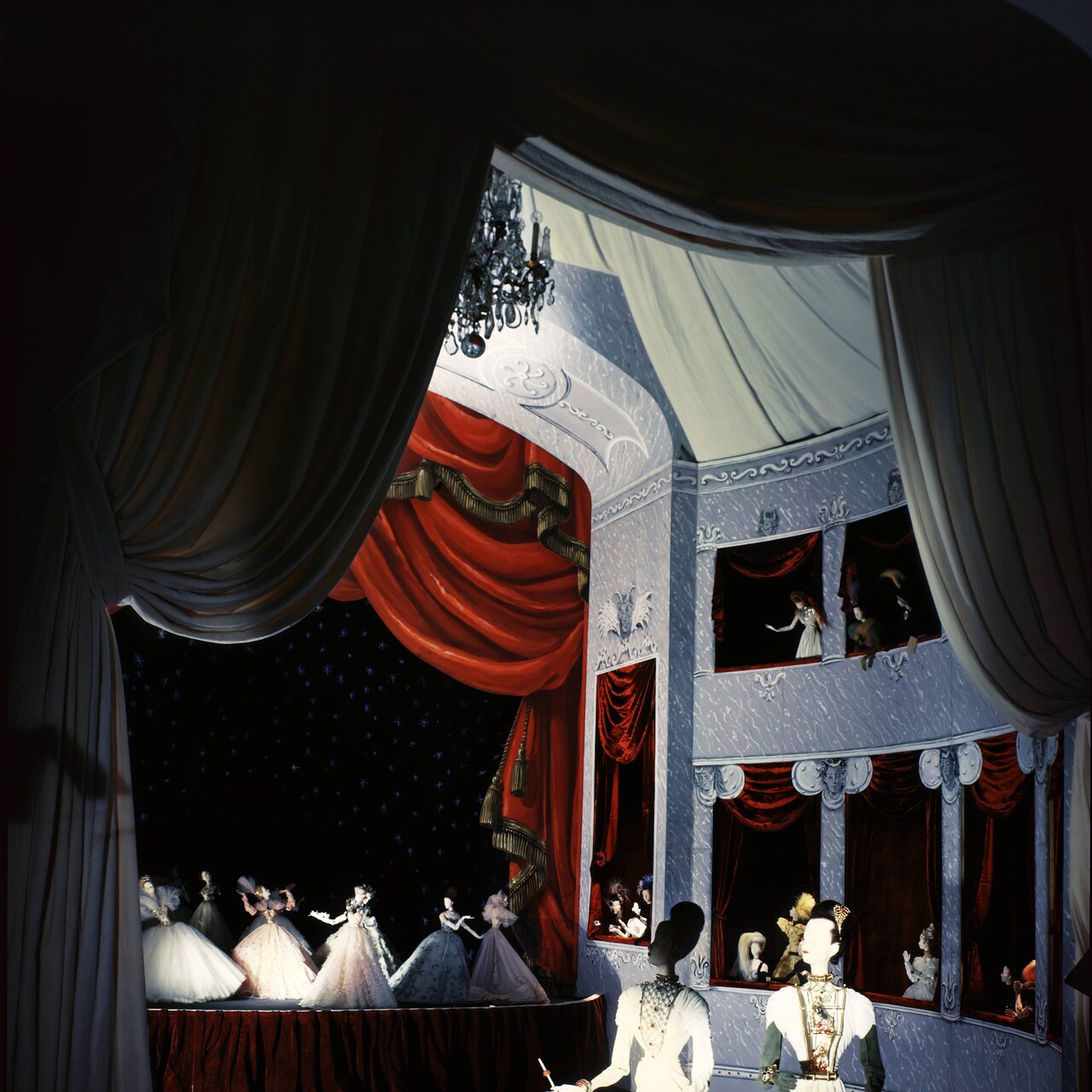 One of Christian Berard’s sets – a miniature opera scene for the Petit Theatre a la Mode. Image via The Telegraph.

After the war, despite their efforts to remain trading, French couture was at a low ebb. Paris had been cut off from the rest of the world for the duration, and now had to remind everyone of both its existence and necessity in a post-war world more concerned with scraping lives back together than pretty frocks. Robert Ricci conceived a grand exhibition. In 1944, along with Lucien Lelong, he contacted all the French couturiers, including those who had remained trading, had to close their doors, or escaped overseas. Fifty of them agreed to take part in his great display of fashion.

170 dolls were created at a third of human size. Their limbs were wire, their heads were porcelain, their expressions haughtily blank and their hair was created with wigs made partly with real human hair, partly glass fibre, but all curled into the most elaborate up to the minute styles. They were dressed by couturiers including Cristóbal Balenciaga, Jacques Fath, Jean Patou, Elsa Schiaparelli, and of course Nina Ricci, and wore real jewellery designed to scale by Boucheron, Cartier and Van Cleef. Their silk lingerie was unseen but faithfully included, and they stood in sets by Jean Cocteau and Christian Bérard. The accessories of course included tiny shoes, belts, handbags and gloves, and the initiative was supported by the newly created Ministry of Reconstruction.

With electricity often cut and food still in short supply, seamstresses, beadmakers, craftsmen and artisans worked long hours, often by candlelight and without heat to complete the idea.

It was worth it though. The show, opening at the Louvre on 28thMarch 1945 was an immediate hit, with more than 100,000 visitors and a million francs raised for French war relief. After six months at the Louvre it went on tour to Barcelona, London, Leeds, Copenhagen, Stockholm and Vienna, then in 1946 moved to New York and San Francisco. French couture had regained its place on the world stage.

Perfume and retirement of Nina Ricci

The Nina Ricci brand continued apace. Perfume, leather goods and accessories were added. The first fragrance, named ‘Colour Joie’, was released in 1946. Two years later another called ‘L’Air du Temps’ was released.By the 1950s, Nina Ricci was distributed throughout Europe and the US. Nina herself, now over 70, slowly withdrew from personal involvement.

Robert appointed a new head designer, the Belgian Jules-François Crahay in 1954. His designs made headlines for the comparatively staid house and he stayed for a decade, leaving to work for Lanvin in 1963, but returning as head of the house in 1970, which was the year that Nina Ricci died. In between, Gerard Pipart took up the mantle, and a sucession of head designers followed including Nathalie Gervais, James Aquiar, Lars Nilsson, Oliver Theyskens, Peter Copping and Guillaume Henry to date.

The first ready to wear boutique was opened in 1979. In 1998, the Spanish beauty and fashion group Puig bought the label and still owns it.

Nina Ricci, Dress, photographed by Joffé-Monneret for L’Officiel, 1938 image via the Red List.

Nina and Robert Ricci with their Petit Theatre a la Mode dolls. Image via Head to Toe Fashion Art.