Edward Molyneux (born 5 September 1891, died 23 March 1974) was a dashing and debonair British couturier from 1919 up until 1950, who worked at the House of Lucile before starting his own Parisian House which became known for its elegant simplicity. He dressed European royalty and Hollywood stars. He lost an eye in the First World War, and had a fling with Harold Nicholson, who was married to Vita Sackville-West at the time. 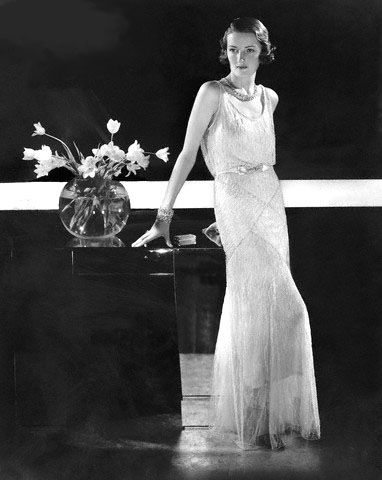 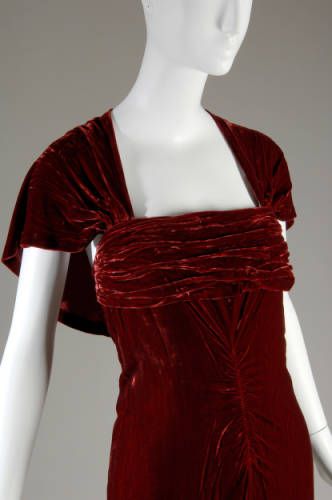 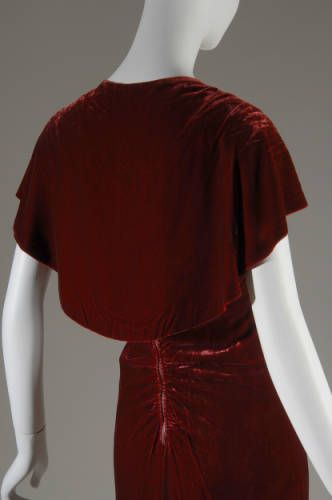 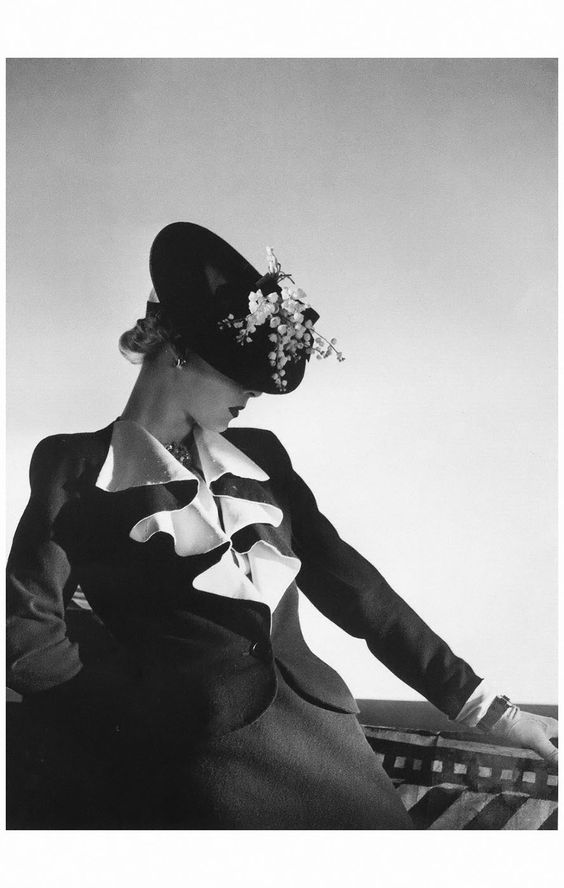 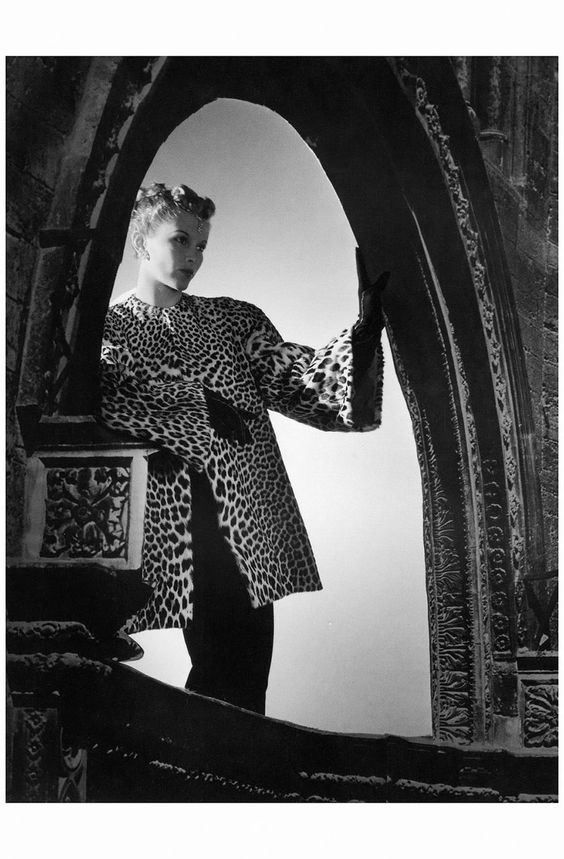 Edward Henry Molyneux was born in Hampstead, England to Justin Molyneux and Lizzy Kenny. Although his family was English, his surname was French because of his Hugenot ancestry. Later on, he would tell his English clients that his name was indeed pronounced “Molinucks” as they kept on trying to say it. From his French clients, who had no problem with the silent “X”, he accepted the more traditional pronunciation.

This kindness and lack of snobbery was characteristic of Molyneux. He attended a public school but had to leave education at age 16 in order to support his mother when his father died. He didn’t abandon his ambitions to be an artist, however, and found work as the illustrator for the magazine Smart Set.In 1910, at the age of 19, he entered and won a competition to work as a sketch artist for the London couturier Lucile.

Lady Duff Gordon, who ran the business, found Edward Molyneux to be exceedingly talented and promoted him to assistant designer in her Paris salon the next year. He stayed there, working across London, Paris and New York until 1914, when he volunteered to join the British army as war broke out.

During the war, Molyneux rose to the rank of Captain but when he was injured three times, finally losing one eye, he was honorably discharged and awarded the Military Cross for bravery. He returned to work for Lucile, but she fired him after a disagreement in 1919.

That was when he turned to his lover, the diplomat Harold Wilson, who set him up in his own business. The Paris based couture house Molyneux opened in November 1919 on the prestigious Rue Royal. It was an immediate success, and a Molyneux branch was opened in Monte Carlo in 1925, Cannes in 1927, and London in 1932. Incidentally Wilson’s wife, Vita Sackville-West, knew all about the relationship and the financial support, and totally accepted it as they had an open relationship.

Edward Molyneux married Muriel Dunsmuir in 1923. They were divorced in 1924.

Molyneux’s clothes were flattering yet simple. Lucile’s look was all frills and flounces in sensual materials like silk, velvet and lace. Molyneux kept the high quality and the luxury fabrics but stripped away all the non essentials for a sophisticated effect. The look was long line and coolly elegant, a fashion version of principles of Art Deco which was taking hold in culture.

Some of his dresses were designed with the white collars and cuffs of a governess – albeit one who could afford a perfectly cut, tailor-made outfit in fine wool. He preferred classic colours of white, black, grey, beige and navy but enlivened them with polka dots or red accessories, and he was also one of the first to use visible zips.

He was “the designer to whom a fashionable woman would turn if she wanted to be absolutely right without being utterly predictable in the Twenties and Thirties” according to fashion historian Caroline Millbank. Pierre Balmain, who worked for him,called his salon “a temple of elegance where the world’s well dressed women wore the inimitable two-piece and tailored suits and pleated skirts bearing the label Molyneux”. Christian Dior was also an apprentice at his house.

His London salon specialised in sports clothes and tailored daytime outfits, while you would travel to Paris to be fitted for his afternoon and evening clothes. Later on, he branched out into furs, millinery, perfume, lingerie and accessories. 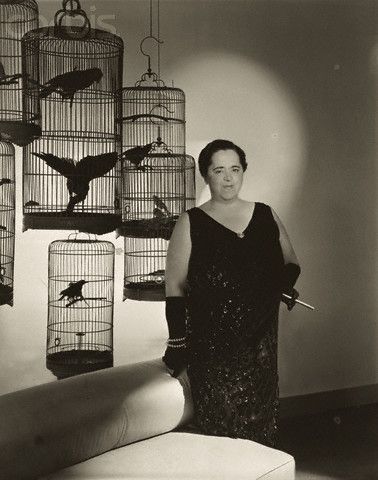 Edward Molyneux ‘s clients included the famously fashion obsessed Duchess of Windsor and the gorgeous and chic Princess Marina both for her everyday wardrobe and for her wedding to the Duke of Kent in 1934.

Greta Garbo, Marlene Dietrich, Gertrude Lawrence, Margaret Leighton, and Vivien Leigh were all dressed by him, on and off the stage and screen. Charming and artistic, the designer was a great friend of Noël Coward and admiring commentators sighed that he was just like a character from one of the playwright’s works, or alternatively, Fred Astaire, who was also a friend.

In fact, many of his clients were also friends too, and he liked to spend time with them in one of the two nightclubs he opened with his partner Elsa Maxwell, who was of course dressed head to toe in his designs. Les Acacias was opened in 1921, and on its success Le Jardin de ma Soeur followed.

A Supporter of War Victims 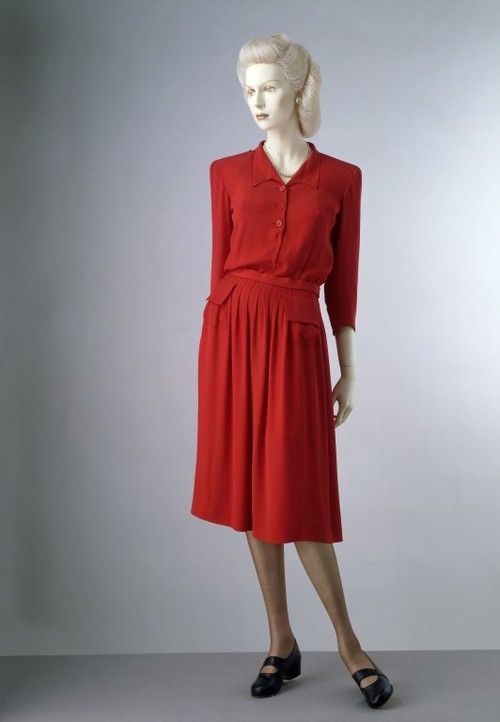 On the outbreak of World War II, he escaped to London on a coal barge, but continued to run his Paris business form England. He was determined that it would stay open for the benefit of his many employees. The designer was also devoted to the war effort. The proceeds from the London branch went to the British Defence Budget. He also funded free canteens for the many needful in London and Paris, a shelter for war victims, and a school for couture workers.

After the war, in 1946, he returned to Paris, only to retire in 1950 because a doctor had told him he was at risk of losing the sight in his other eye. The label, which had 500 employees at that point, continued without him.

Actually, the designer’s sight remained absolutely fine, and becoming a little bored with retirement he opened a ready to wear line, Studio Molyneux, in 1964. The new label received mixed reviews, and he left the business five years later, in 1965. The brand continued on until 1977.

Edward Molyneux – A painter of renown

Throughout his time as a designer and in retirement Molyneux continued his painting practice, and he had two solo exhibitions at which work was bought by the Duke and Duchess of Windsor and Greta Garbo.

He also collected art, starting with eighteenth century art and later becoming keen on the Impressionists. He amassed a large collection which is now in the National Gallery of Art in Washington. Unfortunately it later came to light that his main art dealer was a Nazi collaborator, although there was no suggestion that Molyneux himself had known of the connection.

Awarded the Legion of Honour

For his services to France, Molyneux was awarded the Legion of Honor. When he finally retired for good, he spent his time at his houses in Jamaica, New York and the French Riviera.

Edward Molyneux died in 1974 in Monte Carlo, and is buried in Biot, France, where he had a home.