Elspeth Champcommunal was the first editor of British Vogue, starting in 1916 till 1922. She later became a fashion designer. She was part of high society and the Bloomsbury set, which meant she was friends with Virginia Woolf and her sister, Vanessa Bell. The articles she commissioned were forward thinking: discussing sexuality, feminism, and pacifism as well as fashion and style. It changed the magazine from the fluff of its American cousin, its original model, to something far more intellectual.

After she left Vogue, Champcommunal became a successful fashion designer. She had her own label and then became the head designer for Worth London.

Elspeth Champcommunal – Born in Britain, became a Darling of Paris

Elspeth Champcommunal was the first Vogue editor, under its American Vogue Editor in Chief. 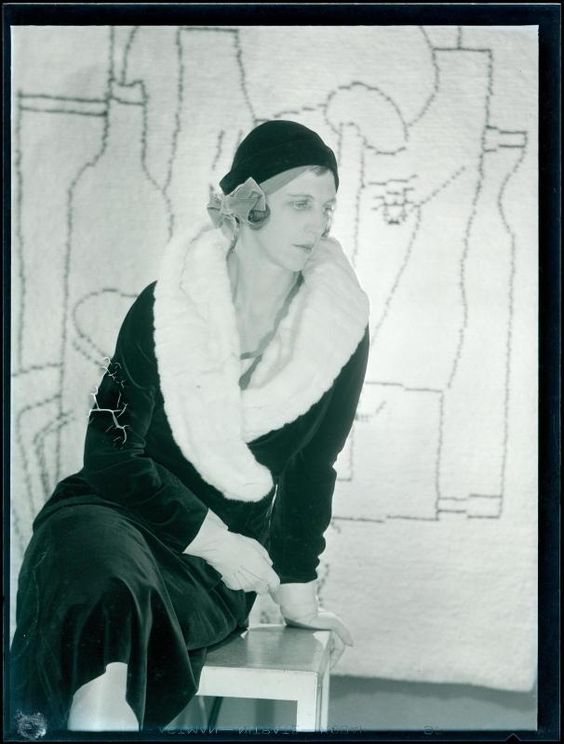 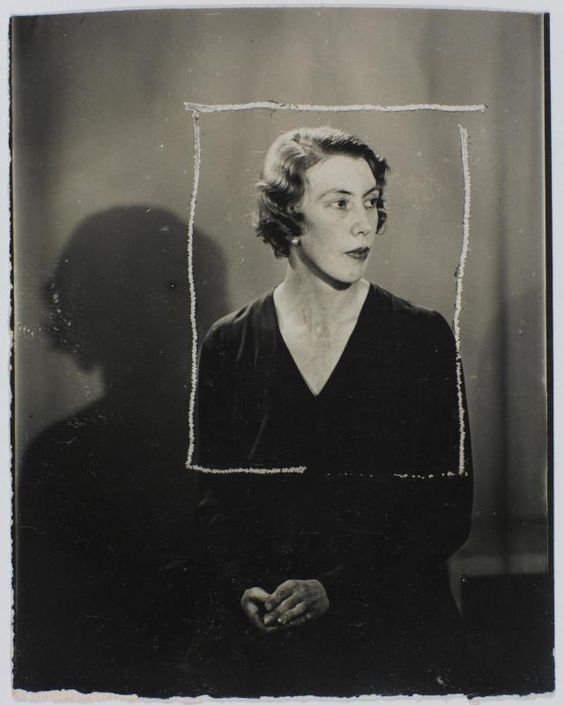 They became friends with the intellectual left bank artists in Paris. Joseph died in action in 1914 during the first world war. Elspeth stayed in France, where she had moved to be with him. She stayed in touch with the literary and artistic set, posing for portraits for Man Ray amongst others. Her friends called her “Champco”. She was known as a “forceful and sophisticated woman”.

Champcommunal had a home in the South of France, where she invited friends to stay. These included Virginia Woolf and the artist Roger Fry. Roger helped her to catalogue and sort through Joseph’s work after his death. 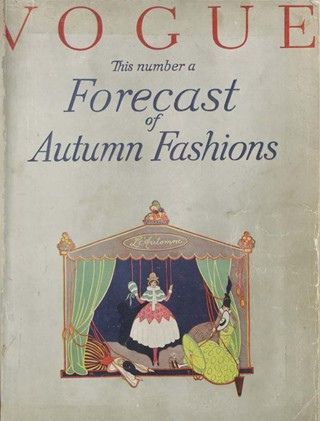 This is the first ever British Vogue, September 1916.

Vogue was an American publication, in existence since 1892. Usually, it, along with other American magazines, was sent to the UK on a regular basis. With the outbreak of war, ships couldn’t be spared for the transport of goods. So Condé Nast, the new owner of the magazine, made the decision to print the magazine in the UK instead. He intended at first that the content should remain the same, with the copy and illustrations being posted to Britain from America.

A New Kind of Vogue

Elspeth Champcommunal was a stylish and intelligent woman. But she had no experience of magazines, writing or editing when Condé Nast contacted her to become the newly set up British Vogue. This would not have mattered too much, as it was more a question of just making sure that that the content was put together properly, typeset and sent to the printers on time. Perhaps an editor’s letter, relevant to British interests, could be added. And besides, the first editor of American Vogue, Josephine Redding, had not been either stylish nor trained in magazines, simply a society lady with common sense and intelligence too. And she had managed extremely well.

Condé Nast was probably hoping that Champcommunal’s elite circle of friends would be useful in launching Vogue to all the right people, and her editorship would serve as a kind of ambassadorship and stamp of approval. In addition, her keen sense of fashion would be useful and appropriate. He probably did not count on her having such a strong personal sense of direction for the magazine, and calling on those friends to write essays and debate the issues of the day. Her Vogue became too high flown and though she remained in the editor’s position for six years, she was discreetly fired in 1922 by which time the circulation had dropped from 26,000 to below 9,000.

Jane Heap was a profoundly influential American publisher. She founded the Little Review, a literary magazine which was the first to publish the extremely daring and Avant Garde works of authors, artists and poets like William Butler Yeats, James Joyce, and the Baroness Elsa von Freytag-Loringhoven.

In 1920, the magazine, and Heap and her co-editor Margaret Anderson, were convicted on obscenity charges for publishing James Joyce’s Ulysess. But in general, the conviction may have been a punishment for society’s general shock at the scandalous, sex positive, LGBT and particularly lesbian content of the magazine.

In 1929 Champcommunal met Heap while travelling in Europe, as she did every summer. In 1930 they became lovers and remained life long partners until Heap’s death in 1964.

Elspeth Champcommunal As a Designer

By the mid 20s, Champcommunal had used her reputation and contacts to set up her own couture salon in the 8th arrondissement in Paris, under her own name. She immediately began attracting clients and, as a well known name associated with fashion was featured in the fashion press with no trouble at all.

Elspeth Champcommunal – Head of Worth, London

Worth London became one of the “Big Ten” designers during the second world war. It was a member of IncSoc, the society founded to promote and preserve British fashion during wartime. As such, Champcommunal designed Utility Fashion for Worth London. She also made fashion creations for other promotional activities, such as films like Maytime in Mayfair, which featured a fashion show that happened to contain all the IncSoc members.

In 1953 Champcommunal was the only female designer featured in the line up of IncSoc members in a feature in Life magazine about the lavish couture creations being made to celebrate and participate in the coronation of Queen Elizabeth. “Clothes for the coronation year are rich, regal and reserved”, it announced. 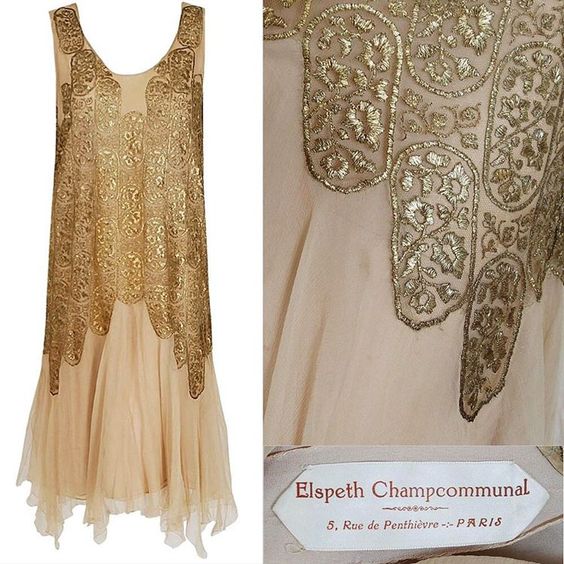 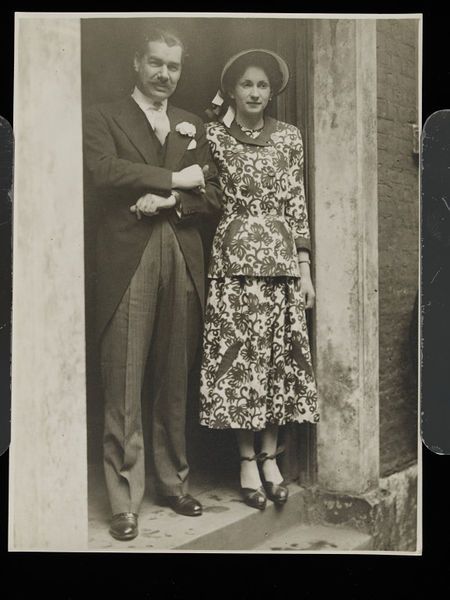 Wedding outfit, spun rayon and wool, for Worth London, 1948. Image V&A via Pinterest. 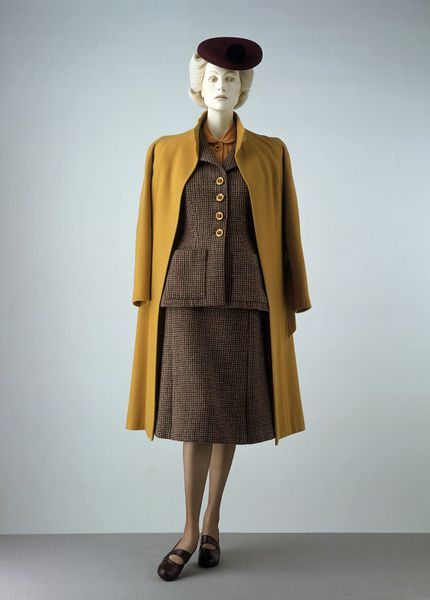 Coat by Elspeth Champcommunal, autumn 1942. Image V & A, via Pinterest. 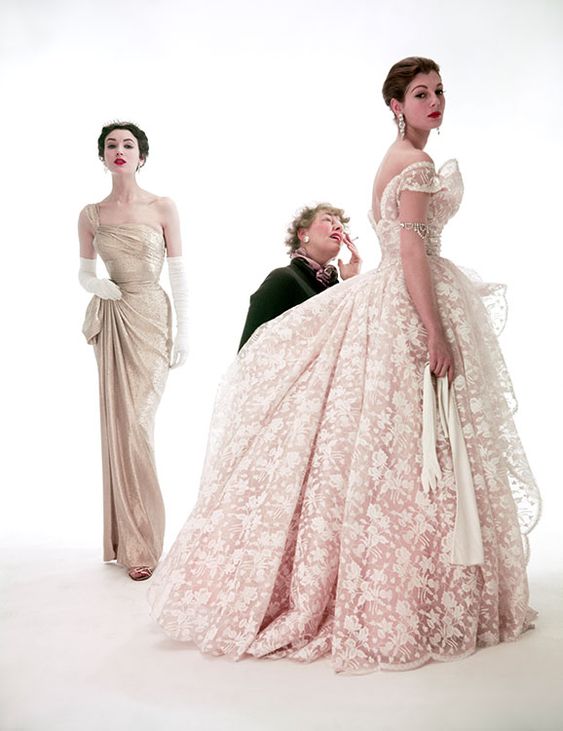 Elspeth Champcommunal, centre, photographed with Fiona Campbell-Walter on the right, unknown model to the left. Norman Parkinson, 1956. Image via Pinterest.

Elspeth Champcommunal retired from Worth London in 1953. She died in 1976.