Josephine Redding is a woman I have been dying to write about since I came across her in the autobiography of the great Edna Woolman Chase. Woolman Chase may have made Vogue magazine what it is today, but Josephine was its first ever editor, from the day it was conceived until 1900. What I love about her is that she wasn’t Fashion at all, although Vogue itself has always had fashion at its heart.

When it was founded, on December 17th, 1892, a daily newspaper (I don’t know which one) deigned to notice it. “Vogue is very pretty, and while she has as yet little to say she says that little very well, and her conversation is very instructive on all points of fashion and topics of the day.” I somehow imagine that the reviewer had just the same patronising view of just about any intelligent woman they came across, who talked about fashion and anything else outside of that writer’s cultural knowledge. 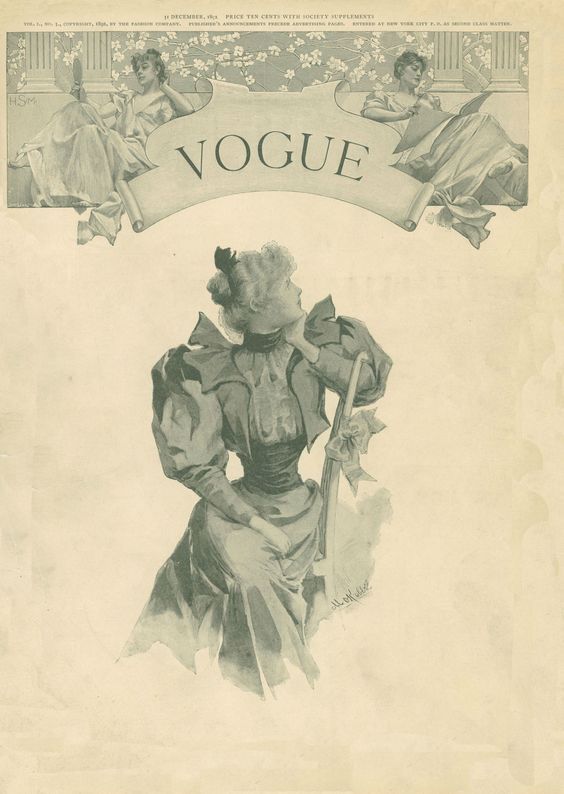 Vogue cover in 1892, the year of its inception. Image via PInterest. 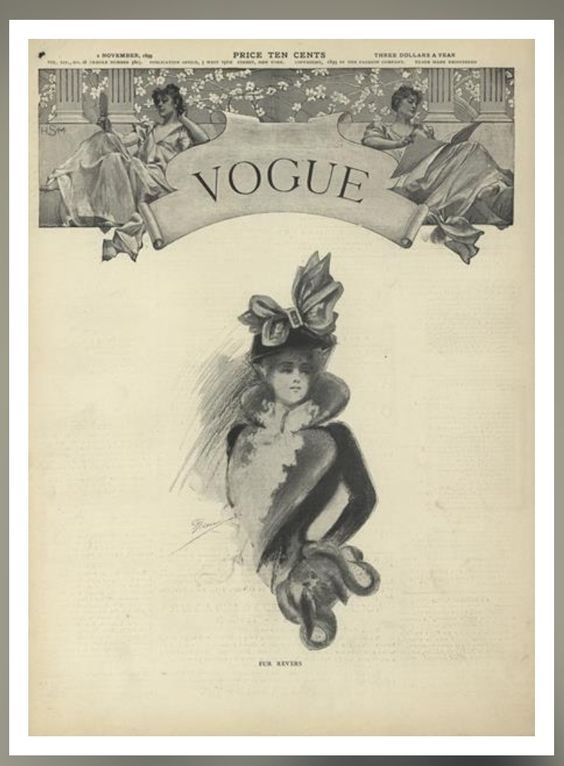 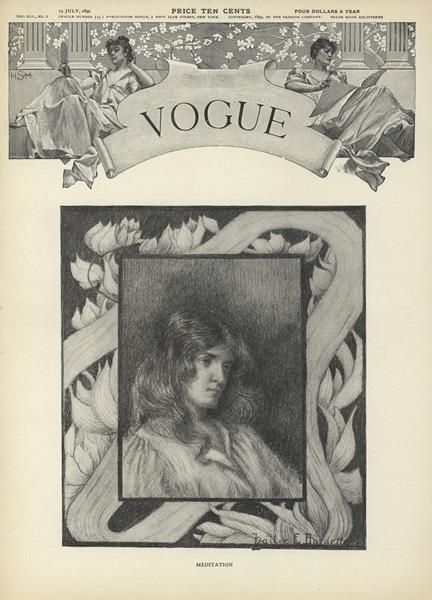 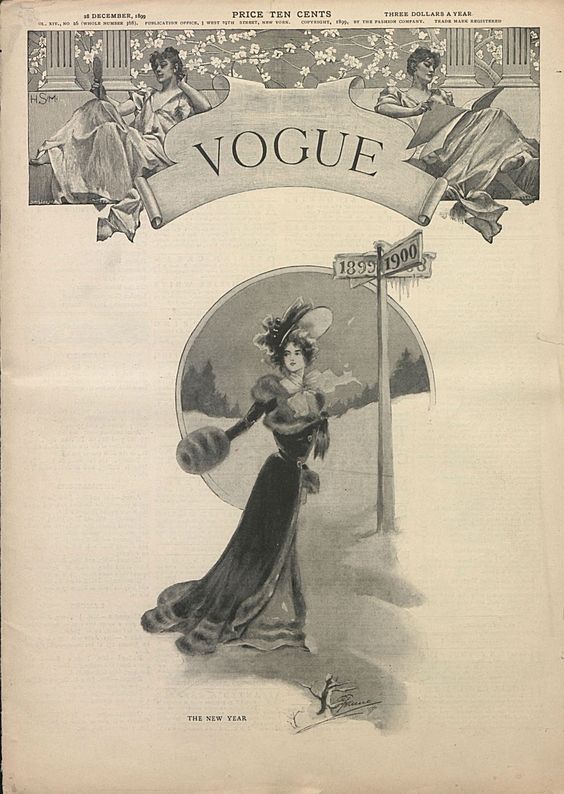 Josephine Redding – beginning at the beginning

Its founder and publisher, Mr Arthur Baldwin Turnure, had other aims for his magazine. In its debut issue, he presented it to the public: “The definite object [of this enterprise] is the establishment of a dignified, authentic journal of society, fashion and the ceremonial side of life, that is to be, for the present, mainly pictorial.” Its investors were certainly confident that the idea would be successful, as they included fifty-six of Society’s prominent names, among them business magnate  Cornelius Vanderbilt and the inventor Peter Cooper Hewitt.

It was a weekly magazine costing ten cents a copy or four dollars a year – about £2.50 a copy or £100 for a year’s subscription of 52 issues. It wasn’t intended as just a “women’s magazine”; the features included many on men’s fashion, sports, and opinions too. There were many contributors, both signed and anonymous. The regular features included “Seen in the Shops”, “Smart Fashion for Limited Incomes”, “On Her Dressing Table”, “The Well-dressed Man”, “As Seen by Him” and “Playhouse Gossip”. There was also fiction and poetry, and a lot of illustrations along with a few photographs. The drawings of dresses never mentioned a designer, however, and sometimes had no description, just a random picture. On other occasions, the caption might be “For description, see another page”, although which page that might be was left as a surprise.

Layout and Illustrations left Something to be Desired.

Turnure’s passion was in typography, and in that respect the magazine was perfect. However, the art department didn’t care very much about layout. Woolman Chase recalls that a love story was once broken up by drawings of plump, belligerent trout on hooks. A page of fiction was illustrated with photographs of the house of a socially prominent couple. In addition, there was a thriving fashion pattern department. Although now run separately from the magazine, it still lives on today.

The staff at Vogue was relatively small, although its offices were situated in a smart part of New York. There were about five or six permanent employees, although freelance writers and illustrators were numerous. In the office were the proprietor, the art director, sub-editor, a couple of assistants, somebody in the post room (which is where Edna Woolman Chase started out) and, of course, the Editor in Chief.

Josephine Redding was a society lady and friend of the proprietor, and she did not need more qualifications than that. The magazine was, after all, for gentlemen and gentlewomen.

She is credited with coming up with the periodical’s title. “Mrs Redding gazed upon the Century Dictionary and saw that its definition of the word “vogue” fitted her fledgleling to a T: “Mode of fashion prevalent at any particular time; popular reception, repute, generally used in the phrase “in vogue”: as, a particular style of dress was then ‘in vogue’; such opinions are now ‘in vogue’.”

A Woman of Decided Views 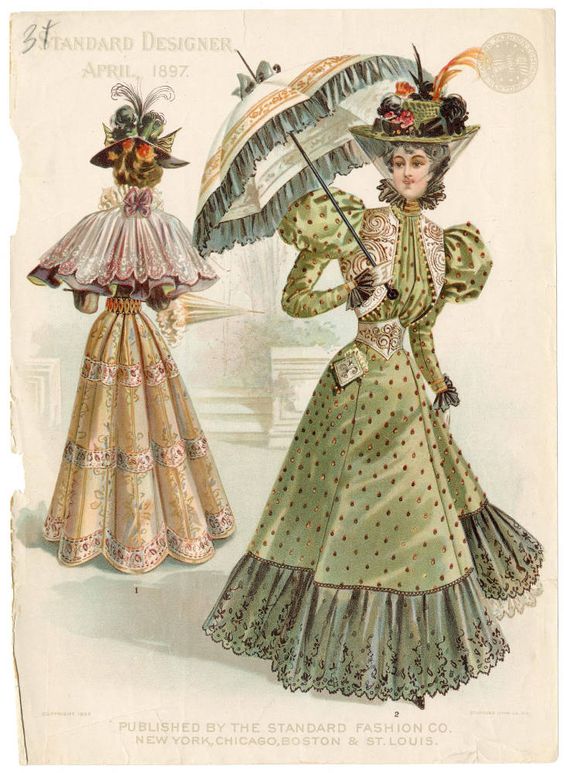 Josephine Redding herself was never in vogue, or perhaps she was ahead of her times. She was a larger lady who never wore a corset, wore only sensible shoes, and nondescript clothing. However, she did at all times wear a large, flat-crowned and broad-brimmed hat. The hats were numerous but always in the same style. She wore them atop day dresses and when dressed for the opera, having tea at her own house (when women by custom would remove their headgear) or out and about. On one memorable occasion, when Woolman Chase was dispatched to see her at home when she was unwell in bed, she was even observed wearing one with her nightgown.

As well as being resolutely unfashionable herself, Josephine Redding was actually anti-fashion. “Humps,” she exclaimed in her editorial. “Women today are all covered with humps. Big, humpy sleeves, humps on their hips, humps on their behinds; it’s nonsense.” Another exasperatedly ran “No sooner are we properly godeted and set up for the season, and are sailing in the zenith of fashion’s glory, than this fiendish discoverer springs upon the feminine world, as he has, within a short time, with his nine-yard wonder. A skirt, twenty-seven feet in circumference, swinging from a twenty-inch belt, is a sight to make angels weep. The silk petticoat, in spite of corded rufflings and wired hemming, will collapse under a nine-yard pressure, and something more substantial must take its place. Hoops, no doubt!”

A Champion of the Animals

If Josephine Redding did not like the vagaries of fashion, there were other things she was passionate about. The editor was a staunch supporter of the American Society For The Prevention of Cruelty to Animals. She frequently had horse owners who failed to properly feed or water or otherwise abused their animals prosecuted in court. In Vogue, she loved to include pictures of animals, usually with no relevance to any story. The animal she loved most of all was the lion. He regularly appeared in all his moods and glory, with or without his mate and family, in double page spreads. There were also plenty of animal stories too. It sounds just like my social media feed.

Josephine Redding was also clearly a feminist in her views. Not only uncorseted and offended by the notion of conceding to impractical fashions, she also didn’t think that men were all that wonderful. “Any romantic notions that a woman may entertain regarding the stern sex are apt to be very badly damaged if she meets men outside of domestic and social circles, say as fellow collegians, or fellow workers in professional or commercial life. Here drawing-room etiquette does not prevail and the […] man, divested of conventional veneer, stands forth in his true colours as a very fallible, commonplace human being.”

I’m sorry that I can’t tell you much more about Josephine Redding and her biography, such as the date she was born and died. I don’t even know if she was married or if the “Mrs” was simply a courtesy title. But I do know that she was clearly a formidable woman, as have been many of the editors of Vogue after her. She helped to instigate a magazine which has shaped the lives of many other women for over a hundred years.