Christian Bérard was a painter, fashion and book illustrator, muralist, interior designer, and costume and set designer. He created many, many illustrations for Vogue and other magazines, including covers, and designed sets and costumes for the Ballet Russe. Perhaps his most famous commission was for costume and sets for “La Belle et La Bête”, Jean Cocteau’s 1946 film. Gertrude Stein collected his early paintings, and he made portraits of Coco Chanel, Jean Cocteau, Cecil Beaton and Horst P. Horst. In turn, his portrait was made by Hoyningen Huene and Lucien Freud. His work even inspired the couture collections of designers like Christian Dior, Elsa Schiaparelli and Nina Ricci.

Christian Bérard was born in Paris in 1902, the son of André Bérard, the official architect of the City of Paris. His mother died when he was young from Tuberculosis, and his father married his secretary. Neither was kind to the child. As a boy, he sketched the ballet and circus performances that he went to with his parents, and copied the drawings from his mother’s fashion magazines. 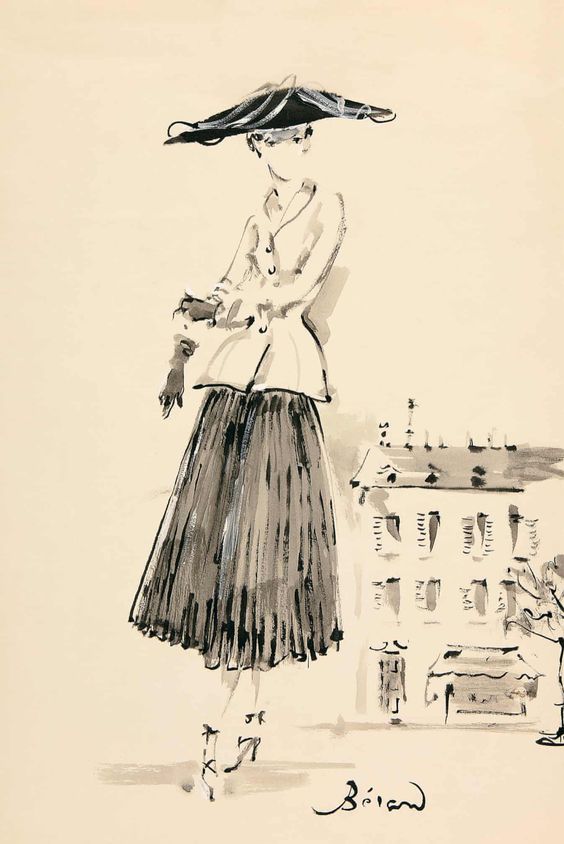 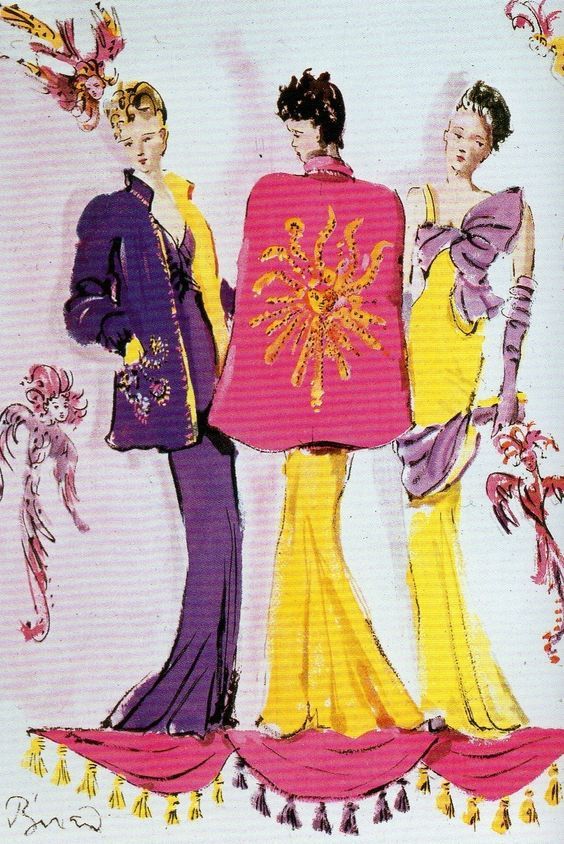 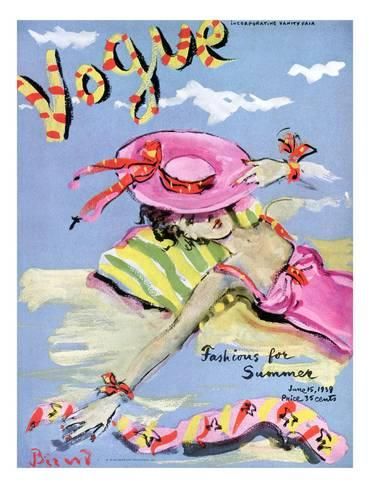 He studied at the Academic Ranson under Edouard Vuillard and Maurice Dennis, and his first gallery show was in 1925. His painting style and medium changed quite a lot, from whimsical sketches to thickly plastered oil portraits. Because of this and the wide range of projects he undertook, including silk scarves for the firm of Ascher Silks London, rug design, murals and screens, and the illustrations for Vogue, Harper’s Bazaar, Art et Style, Formes et Coleurs and Style en France, the critics dismissed his fine art. But it was made with great skill and talent. When he painted, all his jokes and silliness flew out of the window, and he worked with great concentration and seriousness.

The rest of the time, he was the life and soul of any party in Paris, and he did go to a lot. Witty, charming, and charismatic, he was spontaneous and fun, and also kind. He was a favourite of the left bank of Paris in the 20s and 30s, the poets, the writers, the painters and thinkers, quick to dress up or do a little dance. He was also openly gay. His long term partner was Boris Kochno, a librettist with the Ballet Russe.

By the 1930s, Christian Berard was being commissioned frequently. In that decade he designed the sets and costumes for four ballets and many plays, working with Jean Genet and Jean Giradoux amongst others. He created a revolutionary style of set design, still in use today. Instead of realistic room sets, his stages were more a suggestion of a setting. He took as many elements away as possible, leaving just the essentials. His colours were subdued, leaving the costume and action to shine.

Christian Bérard According to Cecil Beaton 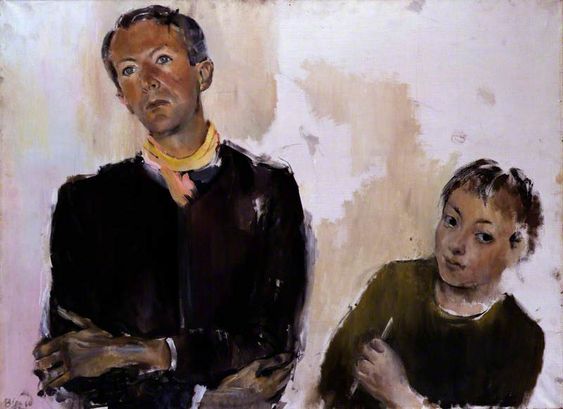 Portrait of Cecil Beaton, by Christian Bérard. Image via Pinterest. 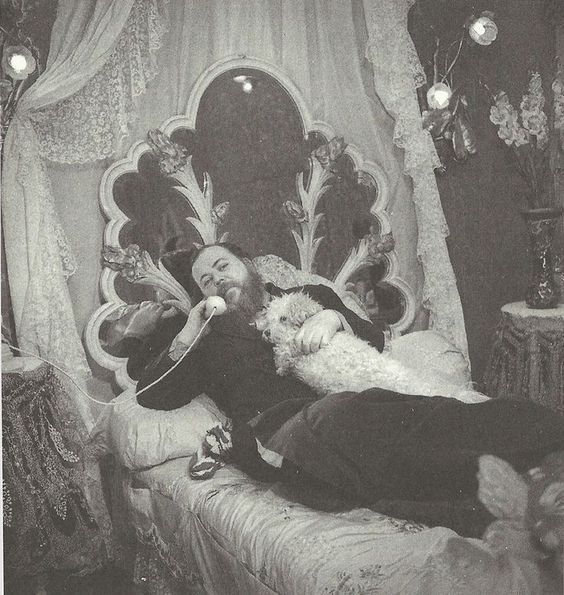 I was reading Cecil Beaton’s early diaries. Amongst a plethora of friends and people he met, he mentioned a man called Bébé, whom he wanted to commission a portrait from. Eventually, in France, he met up with him to make a start.

He described a man of exceptional squalor, which he called “an elemental quality”.

“Bébé’s preparations are animal. He smears the paints with his hands, never bothering to screw the tops back on paint tubes. Colours are squeezed directly on to ever thickening mountains of paint. He recognises and justifies a sloppiness that, in others, would be inexcusable:” If I am careless and dirty and drop everything, it is all right. I can spatter filth about the floor, and it will not be repulsive. But when Francis Rose leaves a pair of bedroom slippers lying about, it seems as unpreposessing as a dirty comb.” This paradox is true enough. Bebe seldom washes; he never sleeps in, but on, his bed. His clothes are filthy. Yet he is never revolting, never unpleasant. His personality and temperament outweigh all disadvantages.

[…] “He showed me his registration card: “Berard – numero such-and-such – soldat. In the event of war report immediately….”

It was with a shock that I realised he was talking about Christian Bérard. I would have expected a man who described his fashion beauties in such spare, elegant lines to have a little elegance himself. In my mind’s eye, he would be slim and fastidiously well dressed. Berard was not. He was a fat man with stained fingernails and mossy teeth, who wore a torn, dirty, paint encrusted suit. Most photographs show him lying down, fully dressed, in a rumpled bed, often clutching an equally dirty but clearly beloved white dog.

Cecil Beaton was catty in the most uncalled-for ways with most people. Still, his loyalty and friendship to Bérard was such that he had no judgement on him.

Bérard’s nickname was Bébé as he looked just like the pink, chubby, smiling baby in advertisements for Cadum soap which, at that time, covered all the walls of Paris. He was blond, blue-eyed and chubby then. Not much later by the time Beaton met him, he was much bigger and had grown a wild red beard.

At the time, 1939, Berard was smoking 50 pipes of opium a day. He was terrified of being called up and dying from the effects of going cold turkey in the army. Luckily, he didn’t have to and spent a peaceful war painting seascapes in a shed in a remote French village which belonged to Boris.

In 1945, at the end of the war, Christian Berard contributed sets and catalogue design for the famous Théâtre de la Mode, the touring show of 237 miniature mannequins designed to bring French fashion back to the public eye.

That year Jean Cocteau also commissioned him to work on one of his most famous films, La Belle et La Bête. He talks about Bérard’s process in his diary:

“Watching Christian Bérard at work is an extraordinary sight. At Paquin’s, surrounded by tulle and ostrich feathers, smeared with charcoal, covered with perspiration and spots, his beard on fire, his shirt hanging out, he gives to luxury a profound significance.”

“Between his small ink-stained hands, the costumes cease to be mere props and take on the arrogant actuality of fashion. He makes us realise that a period dress is not merely a costume but a fashion which belonged to a period and changed with it. People dressed by Bérard look as though they lived at a place, in a definite period, and not as though they were going to a fancy dress ball.”

I saw the dresses this morning in the farmyard at Rochercorbon where I am shooting. They were hanging in the sun, side by side, like Bluebeard’s wives, only lifeless. They lacked their souls, and the soul of a dress is a body.”

“His costumes with their elegance, power and sumptuous simplicity play just as big a part as the dialogue. They are not merely decorations; they reinforce the slightest gesture, and the artists find them comfortable. What a pity it is that France cannot afford the luxury of colour films. The arrival of Beauty at the wash-house, wearing her grand sky-blue dress, surrounded by black chickens, was an absolute miracle.”

Died on Stage and Widely Collected

Christian Berard was only 46 when he died in 1949, working on stage in a theatre. He gave some final instructions about the costumes and set, stood up and said, “Well, that’s that,” and collapsed from a cerebral embolism.

Christian Bérard’s work is now in the collections of the Museum of Modern Art, New York; The Victoria and Albert Museum in London, The Menil Collection, Houston and the McNay Art Museum in San Antonio, Texas.