Barbara Goalen (b. 01.01.1921 d. 16.06.2002) only worked in modelling for six years, in between marriages yet you’ll probably recognise her instantly: the long neck, the very white skin, the flying eyebrows, the hauteur radiating from her and the down the nose glance that made her look like bending her neck might fatally injure her.

In the late 1940s and early 1950s, she was the most photographed and well paid model in Britain, the first supermodel in fact. Although of course she didn’t do it for the money but just to keep herself busy after her first husband died in a WW2 plane crash when she was 25.

Barbara Goalen – the model with a tiny waist 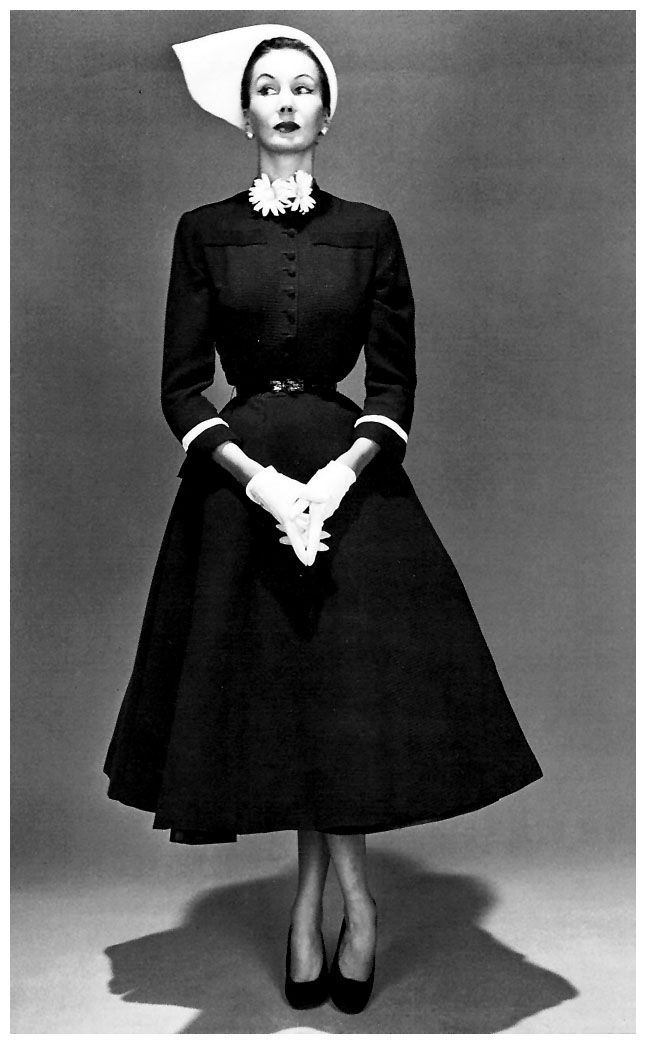 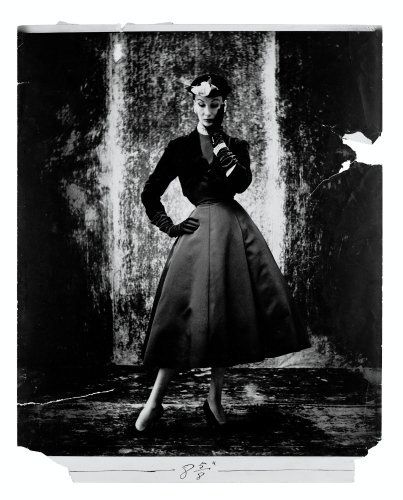 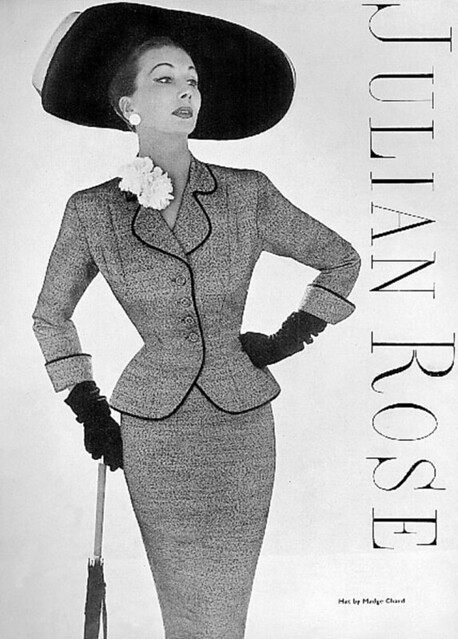 Features in an advert for Julian Rose.

It helped that Barbara Goalen weighed only seven and a half stone, and had an eighteen inch waist, and that this was the period when Christian Dior was in full flight with his fantasy of the fragile female, squeezing them back into corsets after the war years when the type of women’s wear had changed, become less restrictive and more practical.

Barbara Goalen fit the bill perfectly for him and many other designers (though I don’t think you could ever call her fragile, thin though she was – she had a powerful glare and the self-possesion of those born rich). She became the first British model to work with the Parisian couturiers. She started with Balenciaga and was a real favourite of Dior.

Barbara Goalen was born in Malaysia on her father’s rubber plantation before being sent to boarding school at age eight, and on leaving school took up painting briefly only to leave those studies to become an ambulance driver. She dropped the rather surprising job on getting married. She then had two children before her husband, Ian Goalen, died. Her mother looked after the kids whilst she pursued the modelling.

She really enjoyed the work, though it was hard on the feet and all of her leisure time was spent at the hairdressers or manicurists.

on the cover of Illustrated Magazine in 1953.

Barbara Goalen travelled all over the world on jobs, being photographed by Norman Parkinson, John French, and John Deakin amongst others in Paris, New York, Australia and New Zealand for Vogue and Harper’s Bazaar, and riding in a chauffeur driven Roll-Royce for most of her assignments.

In 1952 she was chosen by The Sunday Times Magazine as the personification of the style of that year. She was featured in an article in the magazine entitled “The New Elizabethans” celebrating 25 years of Queen Elizabeth being on the throne with a profile of how people’s work had changed in that time in Britain. Barbara Goalen had certainly worked hard, having recently spent a month travelling 40,000 miles to promote British fashion and its exports.

Although at first Barbara Goalen had taken most assignments, by then she had raised her price to an extraordinary level in order to become more exclusive. She was paid five guineas an hour, which was the equivalent of a weekly wage to most working-class women. It did not put off the King of Saudi Arabia, who requested that she come to his palace to model lingerie for his 300 wives. She regretfully turned it down – “It simply isn’t done, you know”, though “the underwear is really divine.”

In 1954 Barbara Goalen retired from modelling, whilst still in high demand, and married a man called Nigel Campbell “I’d had such a good time and enjoyed myself so much, but I wanted to give up at the top. I didn’t want to slide down the slippery slope. I’ve no regrets. I don’t miss it. My life became very busy, and we travelled a lot for my husband’s business.” She had two children with Nigel. Her modelling photos were consigned to a box in the basement.

However, Barbara Goalen didn’t retire entirely from public life. As “Mrs Nigel Campbell” she was still mentioned in society gossip pages, and according to IMDB she made a “courtesy appearance” in a film called “Wonderful Things!” starring Frankie Vaughn in 1958 and also appeared “as herself” in a TV special of the magician Chan Canasta in 1962. As well as that she filmed a comedy skit with the Goonies, playing the straight woman.

In the 1960s, Barbara Goalen wrote a style column for The Daily Telegraph, where her advice was elegantly about a decade out of date. Ignoring radical advances like the miniskirt, Barbara focussed on glove, not skirt length advising what colour and what length were suitable for which social event. For a mother who wanted to bring out the best in her teenage daughter she commanded: “Have a lesson in make-up at one of the top beauty houses. I have always found that it is a false economy to go to mediocre people” and her advice for holiday packing was: “One great mistake all travellers make is to travel in a formal suit that will not be worn again”. However, I’m quite sure she wasn’t suggesting travelling in tracksuit bottoms.

As well as this, Barbara Goalen designed children’s clothes, modelled by her two younger daughters.

She also organised The Berkeley Debutante Dress Show in the 1960s, though she surprised many when she then said the the whole institution of presenting debutantes was pointless. “I think,” she announced, “the season has completely lost its point.” She was probably right, and the actual ceremony of presentation of the debs to the Queen was last done in 1978 but, maybe surprisingly, the Dress Show is still going strong today.

Barbara Goalen’s personal charity was The Sunshine Home For Blind Babies and she regularly appeared at other charity events dressed in amazingly ostentatious outfits. In 1961, one fashion reporter sniped that only Mrs Nigel Campbell could get away with wearing ropes of pearls, pearl bracelets, chandelier earrings and a diamond hairpiece along with a cyclamen pink evening stole.

Later in life, her passions were the banning of parking meters and heavy lorries in central London, about which she used her celebrity status to give angry interviews the way some celebs today might protest about war in Syria.

Not Mad About Getting Older

Barbara Goalen kept up her visits to the manicurist and hairdresser right to the end, with her hair in a bouffant, fully made up face and perfect nails.

“I’m not mad about getting older,” Barbara Goalen told a reporter, “but I feel there is fun to be had in all ages. Don’t ask me how old I am. I won’t tell you, and don’t look it up in your files. It is so provincial to mention age.”