Bettina Graziani, born Simone Micheline Bodin in France on the 8th May 1925 was a supermodel of the 1940s and 50s. A poet, composer and knitwear designer who indirectly inspired the shape of a perfume bottle, she went by the mononym of Bettina.

Bettina defined post-war glamour, and epitomised the idea of a French model. She was popular “not only with the editors and photographers but with every man who ever dreamed of meeting a French mannequin,” as editor Bettina Ballard remembered in her memoirs.

Everybody at the time had heard of Bettina and she’s still famous today. She was photographed by Irving Penn, Louise Dahl-Wolfe, Henri Cartier-Bresson, Gordon Parks, and Henry Clarke and appeared in Vogue magazine, Elle, Picture Post, L’Officiel, and Mode du Jour.

Bettina was described as a freckle-faced rail worker’s daughter from Normandy. This might have been true, but she was also an exquisitely petit and elegant woman with a hand-span waist and hourglass shape, auburn hair and an unusually playful expression for the time, which usually demanded froideur from its models.

Her father having deserted the family, she was brought up by her mother. She spent her childhood in Normandy and the war years at the safety of her grandmother’s house in Angers. But as a teenager, she became transfixed by her sister Catherine’s style. Catherine would drop in wearing wide padded shoulders and impossibly glamorous hair. Simone went to Paris to become part of that lovely fashion world that Catherine represented. 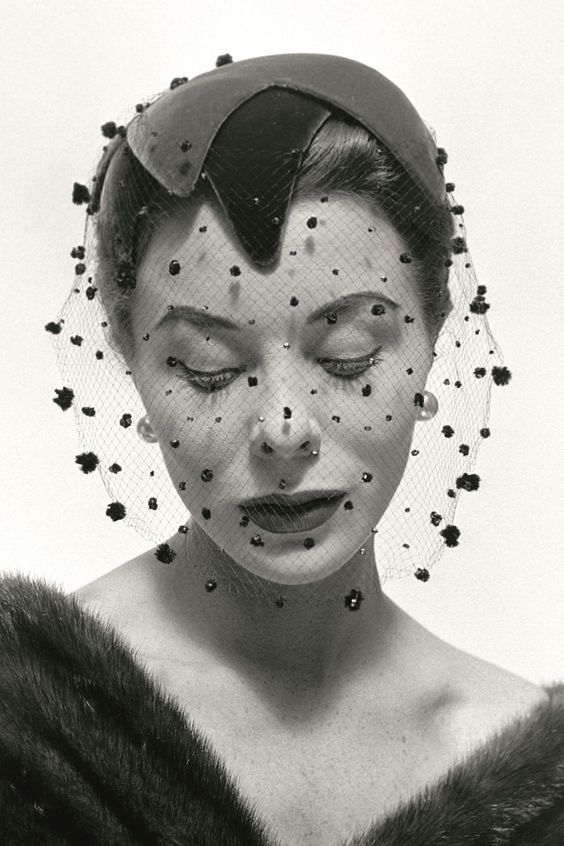 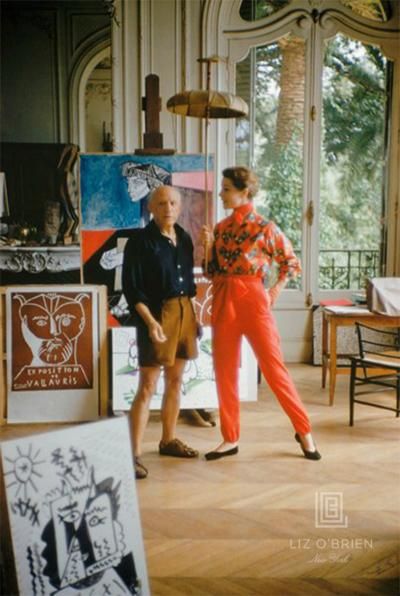 Picasso With Bettina Graziani In His Studio Photographed for LIFE in 1955. 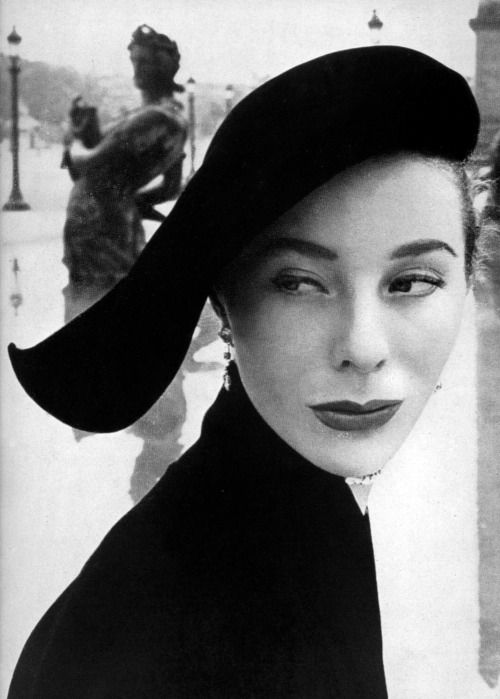 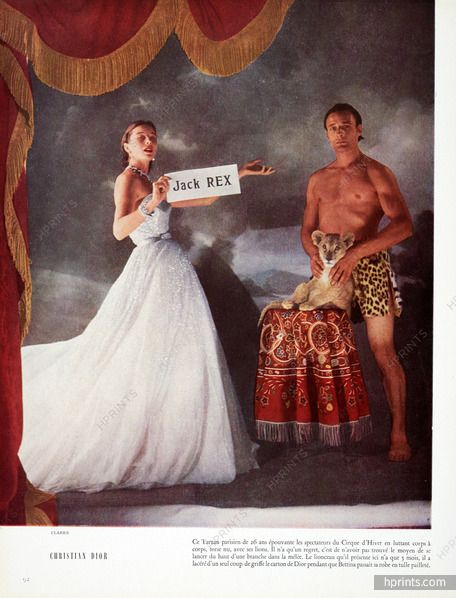 In a Christian Dior ad of 1950 with Jack Rex, and a lion cub. Photo Henry Clarke. 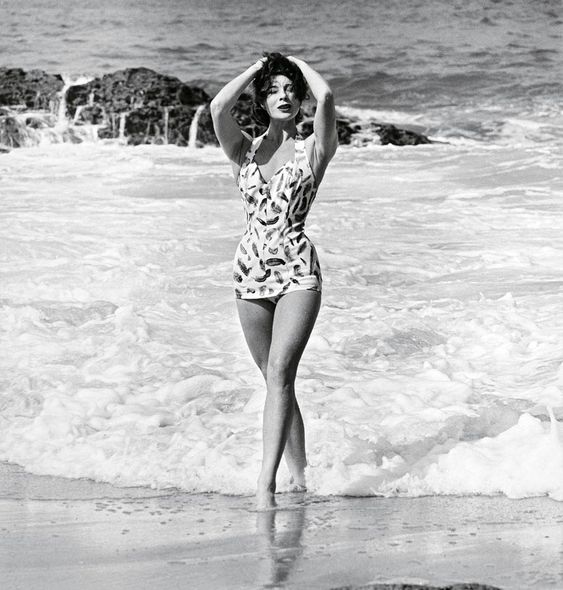 Her career began at the age of 18. She dressed in her Sunday best and took her portfolio of fashion sketches to the young designer Jacques Costet. He only glanced at the portfolio but took a harder look at the woman carrying it, and putting her in a long, green dress, asked her to walk.

She had never worn an evening gown before and had no idea how a model might walk. Perhaps that was what made her so unique. Her walk was very fast and peppy; she transfixed the room when she walked for designers. And she never did get into wearing high fashion: her off-duty look was men’s shirts, long skirts and flat shoes.

“I think, in retrospect, I had a different style,” says Bettina. “Because I can’t say I was the most beautiful. It’s not a question of beauty. You have to have a personality. And it’s all about the expression of the body.”

Costet was inspired by Bettina (who was still named Simone at the time). He created a collection based on her spirit, which included a pink satin negligee worn over wide black velvet trousers.

In 1946 at the age of 21, she married Gilbert “Benno” Graziani, a French photographer and reporter. They went on honeymoon but when they returned, Costet’s house had closed.

Bettina then went to work for Lucian Lelong. “A colourless time in my memory”. Meeting her at Lelong’s, Christian Dior tried to poach her as a house model, but she refused. She went to work at Jaques Fath instead. “We already have a Simone; you look to me like a Bettina,” he announced, launching her into stratospheric fame along with her new name. He made 30 looks for her in the first season she came to work for him. “The dresses had personality. Each one.” She became his muse, model and the director of the salon.

“Jacques Fath was a star,” she remembers. “He was full of life, and he loved life. He loved everything that was ‘glamour.'”

She also remembered his brilliance. He came back from the US with a man’s army shirt, and taking it into the workshop, re-made it in fluid satin. Bettina was photographed by Henry Clark wearing it in 1949. It was the luxury sportswear look, 20 years before Yves Saint Laurent would wow the world with his safari jackets.

Fath also decided that Bettina should have a boy’s crew cut, and she also made the covers of the magazines with that and her own casual clothes.

In 1950 she divorced Graziani and moved to New York. By this time, she was a sought after photographic as well as house model. She became a face at the Ford model agency, which gave her more money, but less freedom. and her next partner was an American screenwriter called Peter Viertel. She enjoyed running with the film crowd more than the fashion one, and soon returned to France, but not before she had licenced her own “Bettina” knitwear range.

When Hubert de Givenchy set up his atelier, he named his first collection after her in 1952 and she became not only a model for him but also his press agent. Givenchy was an assistant of Fath’s and so he knew she could help him launch his brand. In his early collections, he was inspired by Bettina’s personal style. She walked barefoot in cotton separates nothing like the luxury couture that Paris expected. The “Bettina blouse”, became a best-selling and much-copied design, and was the inspiration for the bottle shape for the successful Givenchy perfume “Amarige”.

In 1955 on meeting Prince Aly Khan, the United Nations ambassador from Pakistan she retired from modelling. He requested she do so and promised a life of luxurious domesticity instead. In 1960, the couple, by now engaged, were in a car accident. Bettina was pregnant and later miscarried. Prince Kahn died in the crash.

She returned to the catwalk one last time, at the age of 42 in 1967 for Chanel. It was fun to do it once. I will never do it again.” Chanel had told her she needed to lose weight and suggested her own regime, that of not eating at the weekend.

In the 70s, Bettina became the director of haute couture at both Emanuel Ungaro, and Valentino. She wrote poetry, composed music, and acted, appearing in Bete Balanco in 1984, and La Folie Douce, in 1994.

In 2010 she was appointed France’s Order of Arts and Letters.

Bettina Graziani died in 2015 at the age of 89, beautiful and engaging to the end.