Digby Morton, who was born in Dublin in 1906, was a couturier who helped to put Britain on the fashion map. He reinvented the tweed suit, which was previously a frumpy staple of country life, into something chic and even avant-garde, revitalising the British wool industry as he did so. Because of him, the press started to say “Paris makes the news, but London should make the clothes”.

His suits, and the blouses which went with them, were practical, feminine, and fashionable. He was also noted for his skilled use of colour, his popularising of ready-to-wear clothes and for his work during World War Two in promoting British fashion. 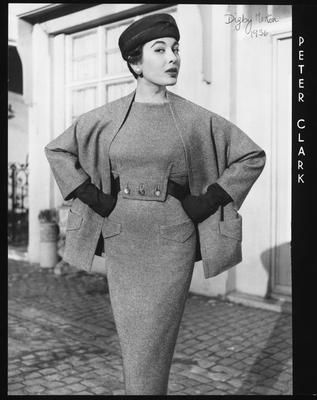 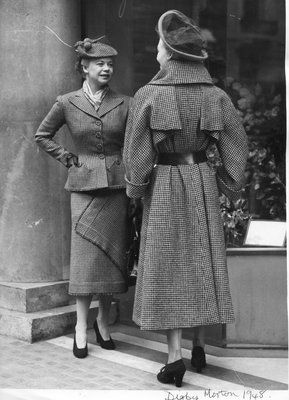 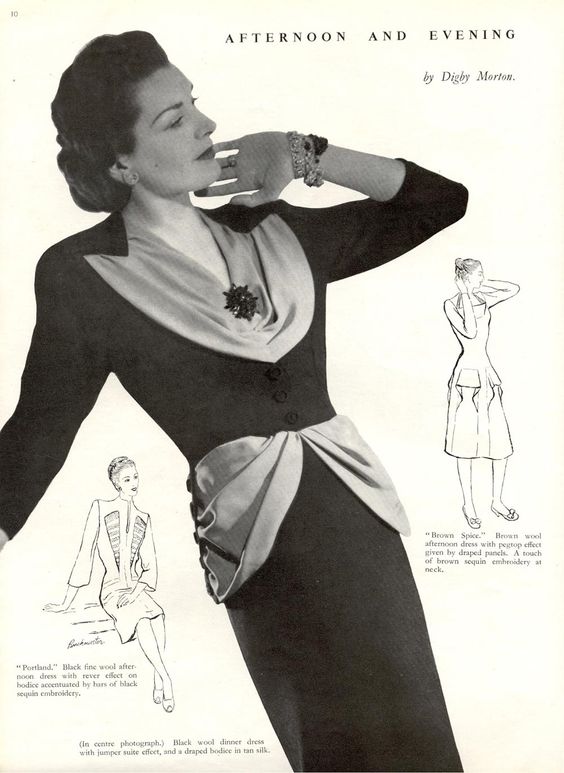 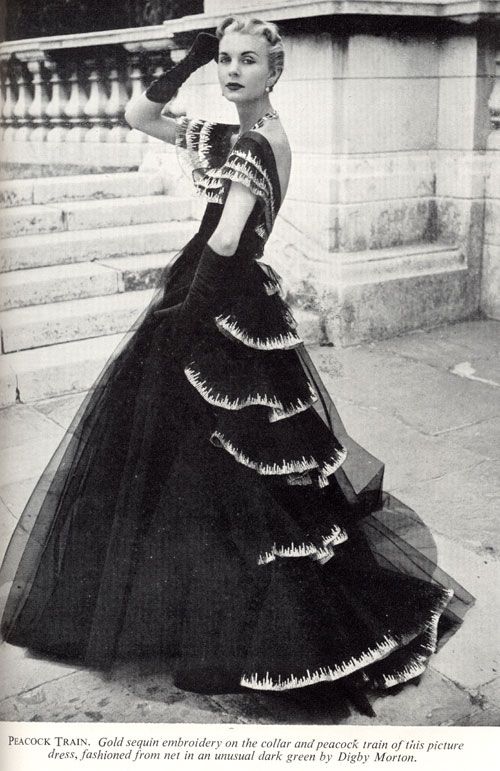 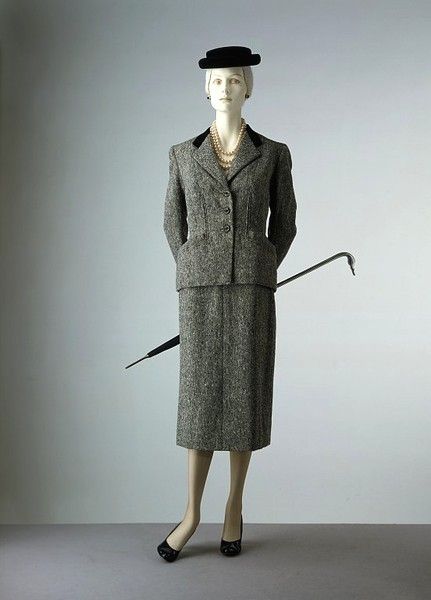 Henry Digby Morton was a charming man with a lively sense of humour and a relish for life. He was also a smart and determined businessman. As a teenager in Dublin he enrolled in evening classes in art from the age of 14 onwards, and won prizes and had his fashion sketches published in the local newspaper.

At the age of 17, he left Dublin and went to London to study at London’s Polytechnic School of Art. While he was there he sold three designs for children’s fancy dress, and was commissioned by The Educational Company of Ireland to create illustrations representing “modern Irish art” for their series of schoolbooks. He also enjoyed walking around the fashion district and the V&A Museum and looking at the clothing there.

His first full-time job was in Selfridges advertising department. Next he worked on the window displays in Liberty of London, and then Jays department store as a house artist, sketching Paris couture. He rose to become the head artist there. In this position he was able to create original designs for the workrooms.

In 1928 Digby Morton founded the couturiers Lachasse. Unlike other fashion houses, this one wasn’t named after its designer – there was no Madame or Monsieur Lachasse. Morton simply named it that to make it seem more French, and thus appealing to fashion customers. The name translates as “The Chase”, which also associated the brand with hunting and other elite, upper class sports.

Lachasse was an offshoot of Gray and Paulette, the London branch of a Paris couturier. It focussed only on sportswear. Even now, that is quite an unusual decision for a designer – his catwalk shows were mostly suits, with just a few afternoon frocks and no evening wear at all. The suits included tweed country suits, the finer tailored suits for town, and the dressmaker suit, which was softer and more feminine than the tailored suit.

Under Morton, Lachasse dressed many actresses both onstage and off, including Gloria Swanson. The house also dressed the American multi-millionairess Doris Duke, the Baroness de Cartier de Marchienne, and style leaders and socialites Baba and Nancy Beaton.

In 1933, Digby Morton left Lachasse to set up his own label under his own name this time. He based it in Kensington, as he was not allowed to set up a competing business within two miles of Lachasse’s Mayfair premises. It was funded by an anonymous socialite. Only one Lachesse member of staff, an expert fitter, joined him, but a lot of his old clients defected to the new business.

Morton’s work was praised by Vogue, Harper’s Bazaar, The Times, The Sunday Times, The Daily Express and the Daily Sketch. He was extremely successful. His clothes were noted for the way that the cut flattered the wearer. The colours and fabrics were also subtle and flattering, yet with dash – for example, a tobacco coloured dress and jacket were of angora wool, with accents of cyclamen velvet on the dress and honey-coloured beaver skin on the jacket lapels.

In 1935 Morton became a member of the newly-created Fashion Group of Great Britain. They included him in a fashion show in New York, which caught the attention of the American press. Through this, by 1941 he was stocked in four of the top department stores in America and one in Canada. Through the Fashion Group he was also able to show in group shows in London, Australia, New Zealand and South Africa.

In 1936, Digby Morton married Phyllis Panting, a glamorous journalist. Her pen name was Ann Seymour. The couple gave parties that were famous, and everyone strove for an invite. She became Morton’s model, advisor and best advertisement, as she always dressed in his clothes. She was also his best friend.

They were both interested in fashion, travel, interior decoration, art and entertaining. They had a wide circle of friends and together they were known as “The Team.” With his marriage, Morton gained a stepdaughter, Valery. Valery worked with Morton as his personal assistant, PR manager and office manager. Morton’s sister, Lucy Morton, also worked for the company as a saleswoman.

When World War Two started, Morton decided to focus on keeping his house open. Because coming to London was risky because of the bombings, he sent small couture collections to several regional cities instead. He also developed a highly exclusive, well made ready-to-wear collection, so that women could shop quickly rather than spend a long time on fittings. There were also far fewer workers available so he simply didn’t have the resources to make much couture.

He designed a collection of Utility clothes for the government, a uniform for the Women’s Volunteer Service, and overalls for female factory workers.

In 1945 he set up an export company to distribute his ready to wear, which was made in Britain from British fabrics.

After the war, his ready to wear business thrived. By the 1960s, Morton was designing paper patterns for Vogue. In 1963 he opened Digby Morton Menswear.

Digby and Phyllis retired to Grand Cayman. They enjoyed themselves; Digby cooked for friends and family and designed t-shirts. Digby Morton died in 1983, at the age of 77. Phyllis Morton died a year later, in 1984.