Victor Stiebel was an influential mid-century South African born British designer who created collections from 1932-1962. He was the one who first inspired Marlene Dietrich in her choice of striking monochrome masculine outfits, but also created the most feminine of going-away outfit for Princess Margaret in buttercup yellow almost thirty years later. During the war he designed Utility clothing for the British public. He also promoted British fashion abroad. His work spanned everything from huge silk gowns for debutantes to cotton overalls for factory workers.

Born in South Africa in 1907, Victor Stiebel had a mother who encouraged his artistic side and a father who was a wool broker, and who he never got on with.

Victor’s grandfather had emigrated to SA from Britain. In 1924 at the age of 17 Stiebel went to England to study architecture at Cambridge.  He joined the university’s famous amateur dramatics society, The Footlights Revue, and started designing costumes and sets for them. He loved it so much that he soon abandoned architecture to become a dress designer.

In 1929 he signed on for a three-year apprenticeship at the esteemed couturiers Reville. The moment it was complete, in January 1932, he opened his own business. Securing the funding for something like this at the age of 25 and with only an apprenticeship behind him would have been quite a feat, but he managed it and his couture dressmaking house had the prestigious address of 21 Bruton Street. His sister, Noelle Stiebel, came to work for his as one of his main administrative assistants.

From the start, the press wrote favourably about his work. “Mr Stiebel is a young man, with clear vision, real ability, and sound ambition. There was no “sameness” about the distinctive models that we saw at the first show. Each one possessed a definite character and beauty of its own, and I thought that his evening dresses and day and evening coats particularly, were of the kind that would arrest attention in any smart gathering, either in England or on the Continent,” commented The Queen magazine about his first collection.

Someone else, however, was not so keen. Brian Duffy, who would go on to become a world-famous fashion photographer, was apprenticed to Stiebel in the late 1950s. “I didn’t think he could really design; he just seemed to be poncing about with bits of fabric making pretty dresses, all boring high-camp theatrical nonsense.” 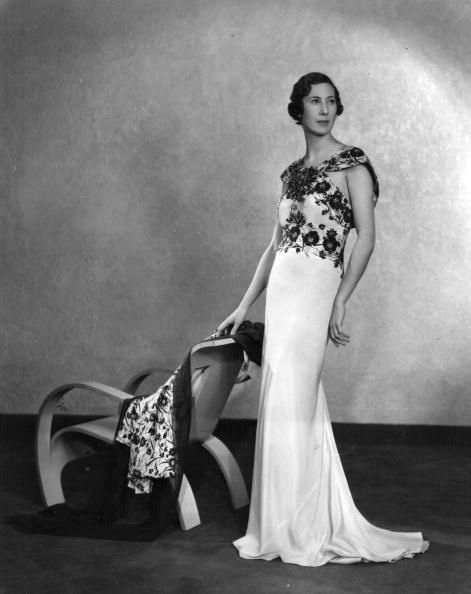 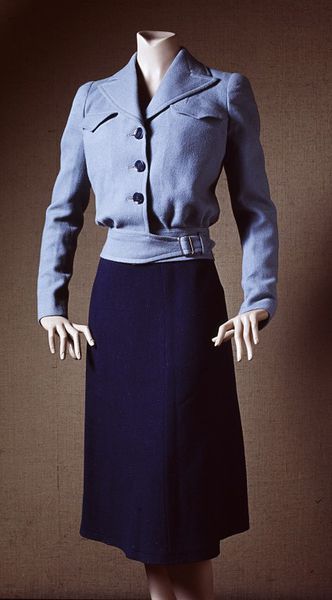 Skirt suit, 1942 by Victor Stiebel. In the collection of the V&A. Image V&A/Pinterest. 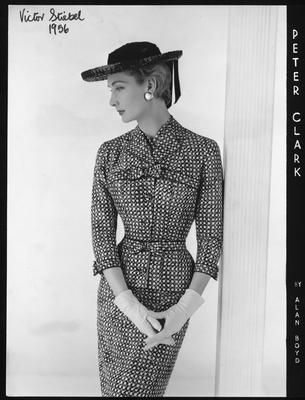 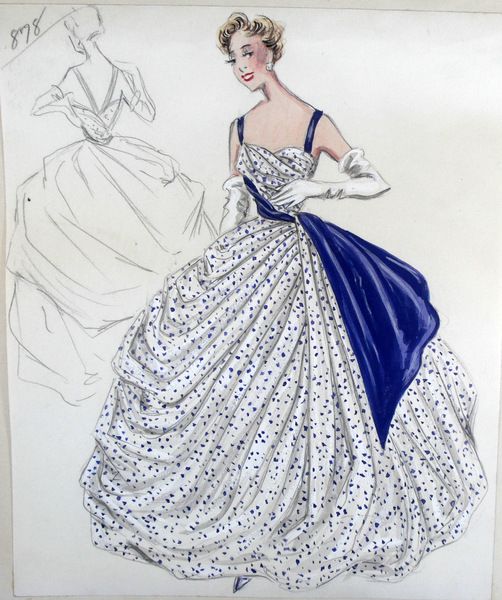 Stiebel’s two specialities were very different. One was precisely cut tailoring, which critics were quick to put down to his early architectural training. The other was flowers. Actual blooms, both real and artificial, were often attached to his gowns, as well as being featured as floral prints and motifs. They were tucked in waists as posies, pinned as a corsage to a lapel, and cascaded down trains. Stiebel employed the celebrity florist Constance Spry to decorate his salon and his fashion shows. Syrie Maughan had designed the interior decoration in very plain white, which was enlivened by Spry’s modern sprays of exotic flowers.

A great fan of Stiebel’s tailoring was Marlene Dietrich. In 1932 he created a tailored evening ensemble for her consisting of a short black jacket, white diamanté embellished waistcoat and black trousers. It was an aesthetic she fell in love with and was to become her signature look. The artist Gluck (Hannah Gluckstein) also wore his masculine tailoring.

As well as Dietrich, Stiebel was to go on to dress Katherine Hepburn, and Vivien Leigh, as well as Princesses Marina, Alexandra and Margaret, The Duchesses of Devonsire, Argyll and Buccleuch and Queensbury, Nancy Mitford, and many others. The going away dress for Princess Margaret was for her wedding in 1960.

During the war, Stiebel signed up for the British Army. During the war years he had to close his house and moved his staff across to Jacqmar and it became “Victor Stiebel at Jacqmar”. He still designed Utility Clothes for the British government while on service, however.

When he was demobbed, he worked as part as Jacqmar until 1957. After that, he was able to re-establish his couture business and became a member of the Incorporated Society of London Fashion Designers. He was among London’s top fashion houses until his retirement in 1963.

Victor had a long-term relationship with the composer Richard “Dick” Adinsell. Because being gay was illegal at the time, the relationship was necessarily discreet but the couple were devoted to one another. Their shared London flat was described as “eclectic and homely”, quite unlike the smart white spaces of Stiebel’s business premises. They also had a house together in Brighton. The designer’s memoir, South African Childhood, was dedicated to “R.A.”

Stiebel also had many close friends, particularly with women. The V&A has an archive of 150 letters he wrote to the actress Vivien Leigh, who was a client of his, over a ten-year period between 1953 and about 1964. The handwritten letters, however, don’t talk about clothing. Instead, he talks about the weather (‘bitterly cold”), theatre and ballet performances he has attended, his life with Dick, and flowers he has seen. They are affectionate and effusive.

By 1955, Victor Stiebel was suffering from multiple sclerosis. He continued working and rarely complained about his condition. Photos of the time always show him seated, with his cane at his side. In January 1963, the collection he was working on had missed its deadline for completion in time to show the American buyers. His health, deteriorating rapidly, was clearly affecting his work and so he made the decision to retire that year, at the age of 56.

He made an agreement with Hardy Amies that the other couturier would take over his entire workforce, so he needed not worry that his early retirement was affecting people’s jobs. Stiebel used his retirement to write a book about his upbringing, the beautifully written and received South African Childhood, (1969). He also loved to make long phone calls to friends, and read books and listen to music.

Victor Stiebel died in 1976, followed by Richard Addinsell in 1977.