1940s haute couture can be divided up into can be divided quite neatly in two – from 1939 it was the war years, and from 1945 post-war. This was, quite naturally, reflected in fashion. However, especially in Paris, the creations never stopped.

The last Parisian collection of 1939, in October, featured innovations for the obviously inevitable coming war. Evening gowns had long sleeves, for example, in case of a chilly late-night rush to the air raid shelter. Elegant air-raid suits with hoods, and other practical items twirled on the catwalks, albeit created in fine crepe wool and a refined colour palette.

The next collection, Spring 1940, was known as “La Collection des Permissionaires”. It was so important to the French to get couture out there that the designers who had joined the army were given special permission to come back in order to finish what they had started. 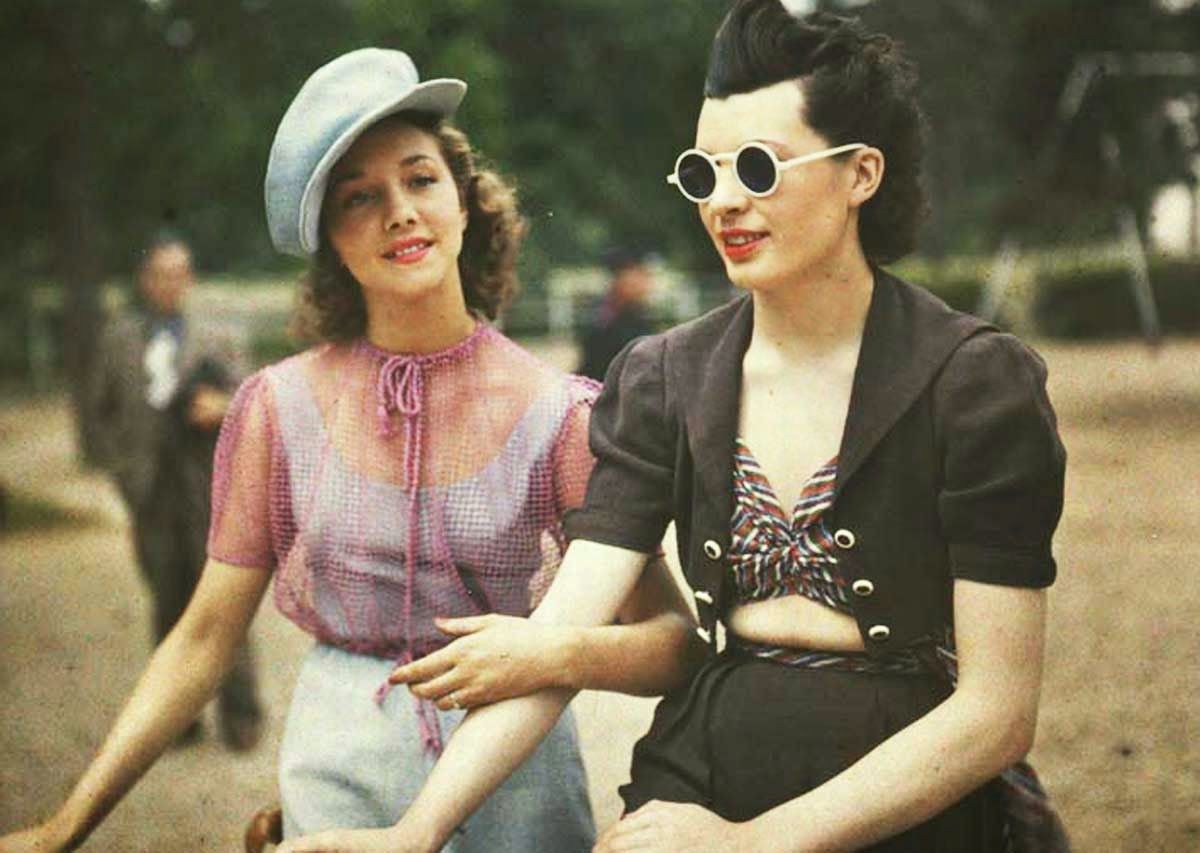 This photo by André Zucca shows women in Paris under the occupation. Image via Pinterest.

When France was occupied by the German army in June 1940, Lucien Lelong, the head of the couture Union, had a difficult decision to make. Keep French fashion going or close it down, losing thousands of jobs in the process? He chose to keep the industry going.

Meanwhile, it’s true, perhaps the average French women couldn’t afford these designer goods. They decided to concentrate on accessories. Photos from the period, either captured by German soldiers or taken for propaganda purposes are often in original colour. They show French women in makeup, with lovely hair, tall shoes, and gigantic hats.

However, headlines are black and white. The rest of the world had had no real news of Paris since it was occupied. The borders had been closed, with no-one allowed in or out. The last issue of International Vogue, which was based in Paris had been in June 1940 with a photo shoot showing models sitting on packing cases at a railway station, waiting to leave.

Having imagined a downtrodden and destitute city, it was a surprise, and not necessarily a pleasant one, to find women swanning about in enormous hats. Visitors were appalled to find out that at the same time as their own women had been making do and mending, putting a brave face on patched skirts, in French women still enjoyed their chic little black dresses. And not only French women, they quickly conjectured. German women too – Nazi wives. And surely those French who could still afford or have access to 1940s haute couture – they must be collaborators. And what decadence, when people could not even get food.

It was a couple of years later, in 1947, when the international press and buyers felt like it was OK to come back to Paris and view the shows. They found, yes, lavish amounts of fabric and the famed nipped in waist and full skirts exemplified by Christian Dior’s Corolla line. But did veteran editor Carmel Snow really scream “My dear, it’s a completely new look”? as he unveiled it? Maybe she doing it for the benefit of the reporters, maybe she was referring to the precise way he padded the hips of his jackets or pleated his skirts. Because, as she would have known, it was an Old Look.

Since at least a decade ago the hourglass silhouette had continuously been in fashion, and this amplified version, puffed and padded, was shown by several houses that season. It was certainly absolutely exquisite. If you have a chance to look at his Bar jacket in person, I recommend that grab it. The hand stitched buttons, the masterful way the fabric is manipulated into curves over the strict structure of the garment is incredible. It was certainly a fantastic advert for the resurgence of French couture. And it didn’t hurt that Dior’s models were extremely photogenic.

1940s Haute Couture – Over in England

Over in England, meanwhile, haute couture collections did cease. Similar to in France, some designers were recalled from the front line. But this was strictly for the war effort.

The editor of Vogue, Audrey Withers, had come up with a plan to help the UK fashion industry. And it didn’t come with the moral conundrums that Lucien Lelong faced. Britain faced a shortage of fabric and resources, due to most of the factories making uniforms instead of frocks. So the government brought in rationing of how many clothes civilians could buy. Further to that, they decided it would be a good idea to strip them down to the essentials. Out went excess frills, decorative pockets, and even trouser turn ups. But people were horrified at these new, stark looking designs.

Audrey Withers thought that perhaps Britain’s top designers could make these necessities into an interesting design feature. She dreamed up the Utility Scheme. Norman Hartnell and Hardie Amies were among those asked to make wartime clothes inviting. They designed streamlined clothes which could then be mass manufactured according to regulations. The label on them read “CC41”.

Britain Can’t Have It

After the war, rationing and the war effort were kept in place for quite some time. In fact, we did have some resources, such as wool, rubber and silk. But it made more economic sense to export British 1940s haute couture to more unscathed countries than to sell them to the somewhat impoverished citizens of the home market. 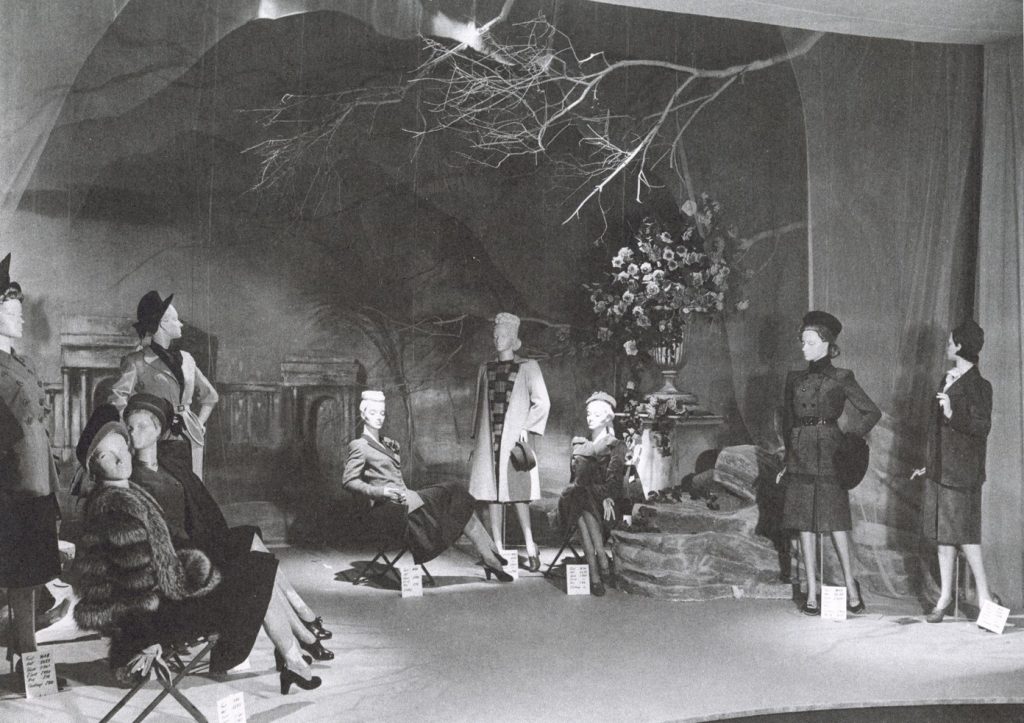 Clothing at the Britain Can Make It exhibition. Image via UAL.

So in 1946, the British Government launched an initiative to show how sparkly British design, including couture could be. A collection of British-made creations was shown in the empty ground floor of the V&A Museum. The title was “Britain can make it“. “Britain can make it, but Britain can’t have it”, grumbled the press. The creations were designated “Now”, “Soon” or the rather vague “Later”. Most of the exhibits, including suits designed by Norman Hartnell, were earmarked for “Later” when it came to the home market, although available “Now” or “Soon” for customers abroad.

However, by 1949 regular collections were back in full flow, and in 1947 Princess Elizabeth, now her Majesty the Queen, saved up her coupons for a wedding dress, got married and hugely stimulated the 1940s haute couture.

1940s fashion reimagined and reworked with a modern spin