1940s Mens fashion was defined by the Second World War which started in 1939 and ended in 1945. Most 1940s men spent the 40’s in uniform, therefore 1940s  fashion for Men was utilitarian. British Army Uniform for the 2nd World War consisted of Battle Dress. WW11 battle dress was a wool uniform in shades of khaki or brown. It was designed to be easy to move in, warm in cold climates and relatively comfortable when wet.

Army uniforms were based on ski-wear, which had been popularly worn at the time. There were high-waisted trousers, a jacket and a shirt beneath. The trousers were designed with numerous packets for different functions including a map pocket. The sleeves of the jacket were set so that it was comfortable shouldering a rifle, or with the arms forward while driving.

When a soldier stood straight, this sleeve design didn’t look so tidy. Braces were sometimes added, and boots and puttees, and a tin hat or officer’s hat completed the picture. Originally designed with luxuries like a fly front to the trousers, and pocket flaps, but the extra material involved in this meant that the design became stripped down to basics, and plastic buttons were substituted for the original brass ones. 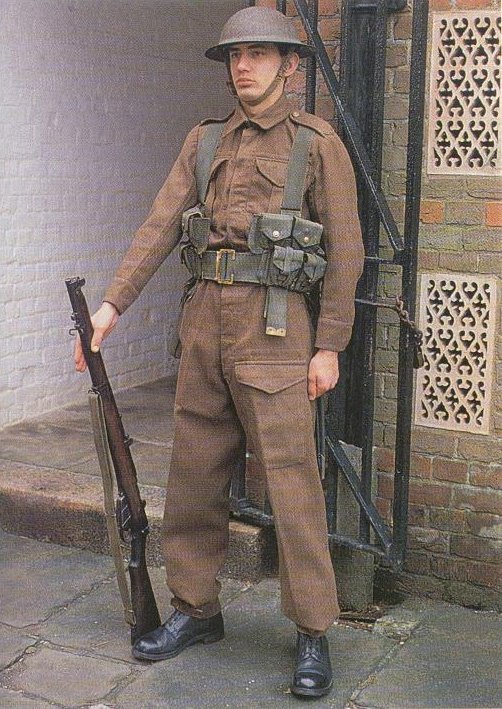 In a similar vein, The Utility Clothing Act, an oft amended law that restricted the way that clothing was made, came into force in 1941. This act restricted civilian men’s 1940s clothes, as well as women’s 1940s clothing. Suits had to be made single and not double-breasted. Any extra fabric details were banned, so pleated or darted pockets on coats and jackets were out. Hems were narrowed all over, trousers could only have one pocket, and they could feature no turn ups. Waistcoats, of course, were completely outlawed. Critics suggested that this was a false economy and that men would simply wear a pullover instead of a waistcoat. In addition, turn ups and pocket flaps helped garments to last longer by concealing baggy pockets and worn out trouser cuffs. 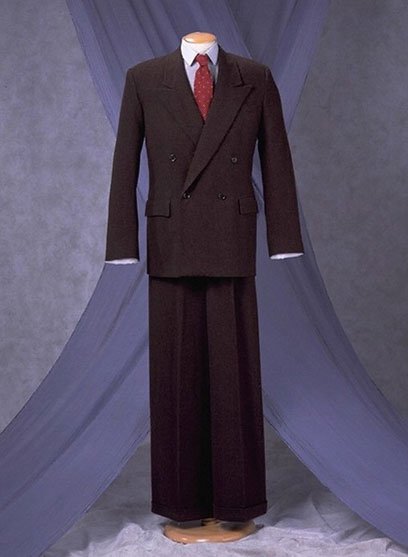 Make do and mend and Zoot suits

The government issued 66 clothing coupons to each person. It limited the amount a man could buy in a year to only one overcoat. In addition other clothing items were limited to one only. These includes one jacket or blazer, one pair of trousers, one vest, pair of socks, sweater, pair of pants, and one pair of shoes. Understandably because of rationing, men as well as women were urged to “make do and mend”.

The situation was similar in the US during the 1940s, and as a form of revolt African-Americans adopted the Zoot Suit. These were brightly coloured and using a huge amount of fabric, in contravention of regulations.

Men were issued with Demob suits after the war and on leaving the army. Stringent regulations imposed because of severe shortages defined how Demob suits were made. As a consequence demob suits were mass-produced, ill-fitting, and either brown or navy. 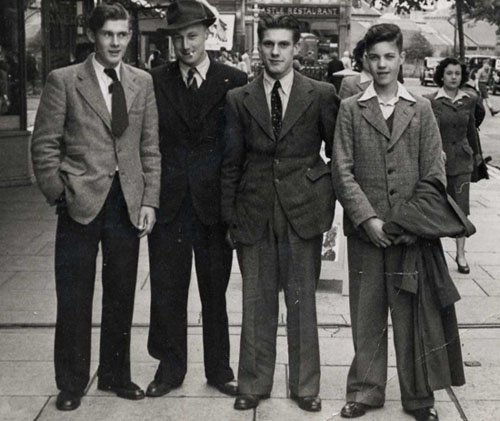 After the war, rationing remained in place until well into the Fifties. As a result this meant that few advances in 1940s Mens fashion were able to take place until after the end of rationing.