War started in Britain in 1939, and clothes rationing was introduced in 1941. So womens 1940s vintage clothing was hugely influenced by the strictures of war.

Designers were under instructions from the government not to waste fabric or trimmings, so long skirts using yards of fabric were out, and in came the pencil skirt. The pencil skirt didn’t use much fabric, and was accompanied by a matching jacket. 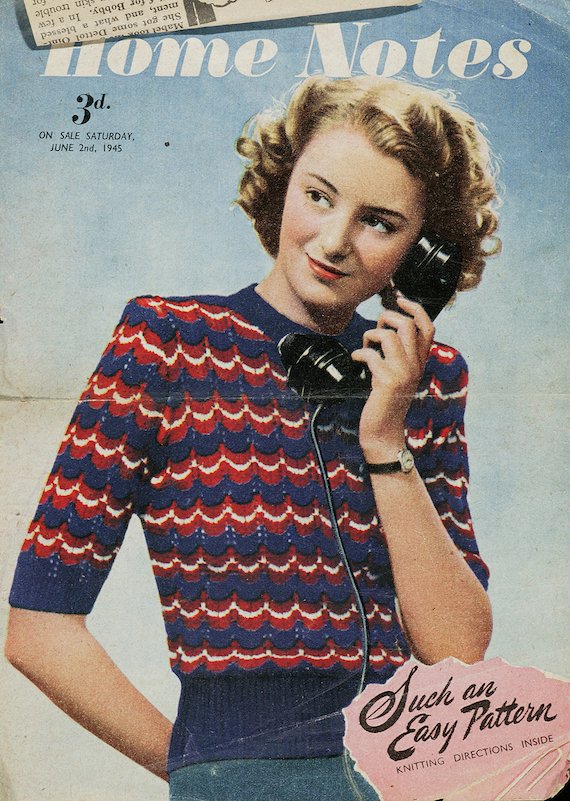 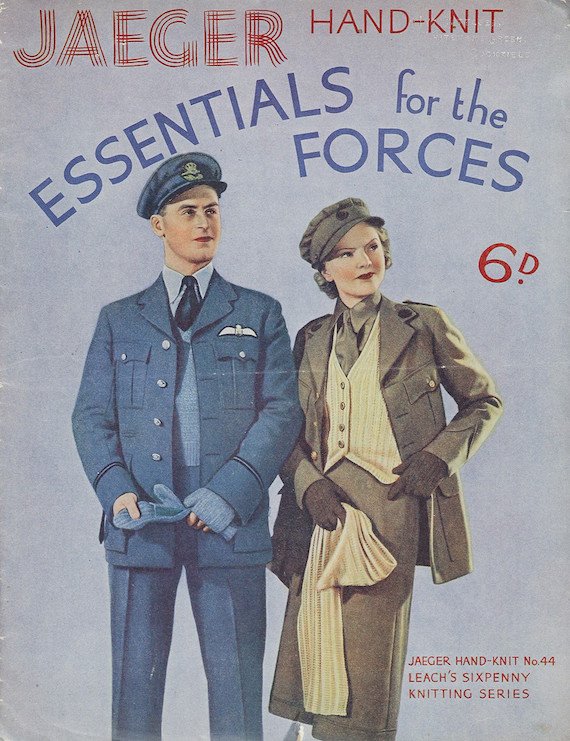 Knits for the Forces. 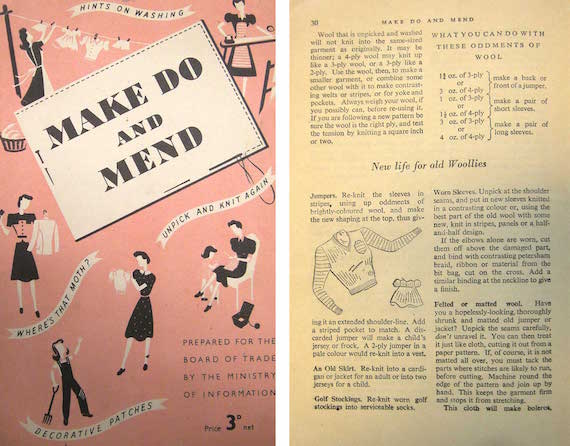 A government pamphlet called Make Do and Mend.

Women knitted their own jumpers and cardigans, sometimes re-using wool from old knitted things to make something new.

Instead of getting new dresses each season as they would normally do, they often altered the ones they had, changing a collar or sleeves, or making the skirt shorter. Clothes swapping parties were a fun way to make the best of the situation.

The lack of fabric for womens 1940s fashion clothing extended to clothes or fabric for very special occasions – you could save up about a year’s worth of clothing coupons for a wedding dress, or you could be inventive and use a fabric other than silk.

Many women wore a pretty dress they already owned, or used furnishing fabrics (which were not rationed in the early years of the war) or parachute silk stolen from factories where they worked or recovered from an enemy’s crash landing.

The flip side of this was that once married, the new husband often had to set off to the front lines immediately. He might be there for years, and of course, many died.

For this eventuality, women’s magazines published very helpful articles on how to convert your husband’s suits into neat little skirt suits for yourself.

Some women didn’t bother with the conversion and just wore the trousers as they were. There must have been more than one man who came home from the trenches horrified to find all his best clothes had disappeared and his wife was looking very dapper! 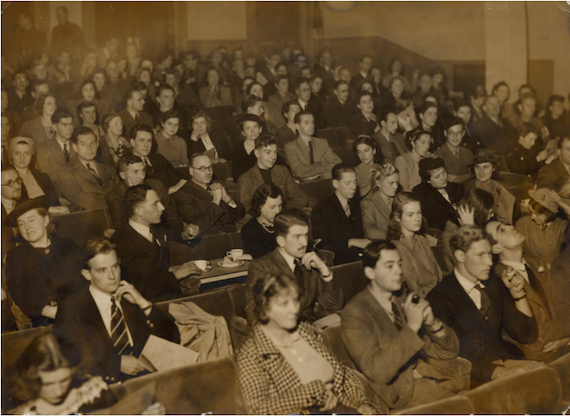 Visitors to a lunch time ballet in the 1940s. You can see what women wear for everyday here.

Women did complain at the time that the clothes available in the shops, even when they had saved up their tokens, were very clunky and drab.

The leather soles of shoes had been replaced by cork or wood, which some felt most inelegant clopping around in. However, it was generally not the thing to complain about it all in public, as the men on the front line were facing much worse problems than sartorial disasters.

But all was not lost – hats weren’t rationed and some very extravagant ones came in. 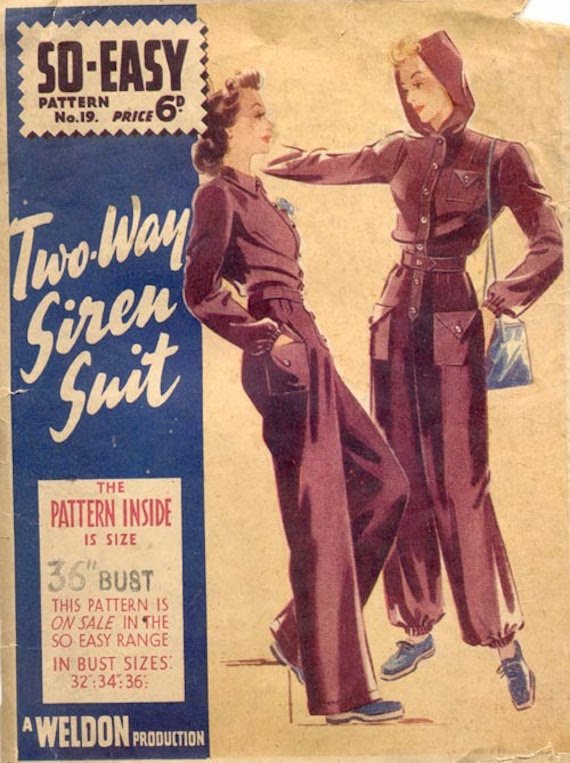 One practical aspect of womens 1940s vintage clothing were “Shelter Suits”. They like a really grown up kind of adult onesie, designed to look as good as possible for daily life whilst being warm, cosy and comfortable for the many hours spent in air raid shelters, which you had to dash for with no notice. 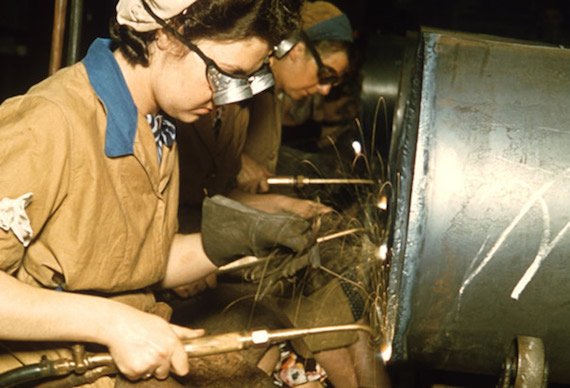 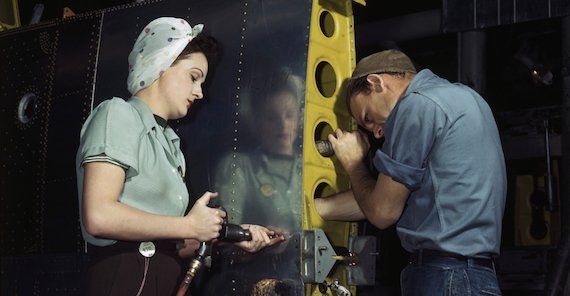 A woman riveting an airplane.

Womens 1940s vintage clothing also featured the overalls used for war work in munitions factories, which women made into a fashion statement by cinching in with belts and adding colourful bandannas. Women who worked on farms were known as Land Girls and had their own style too. 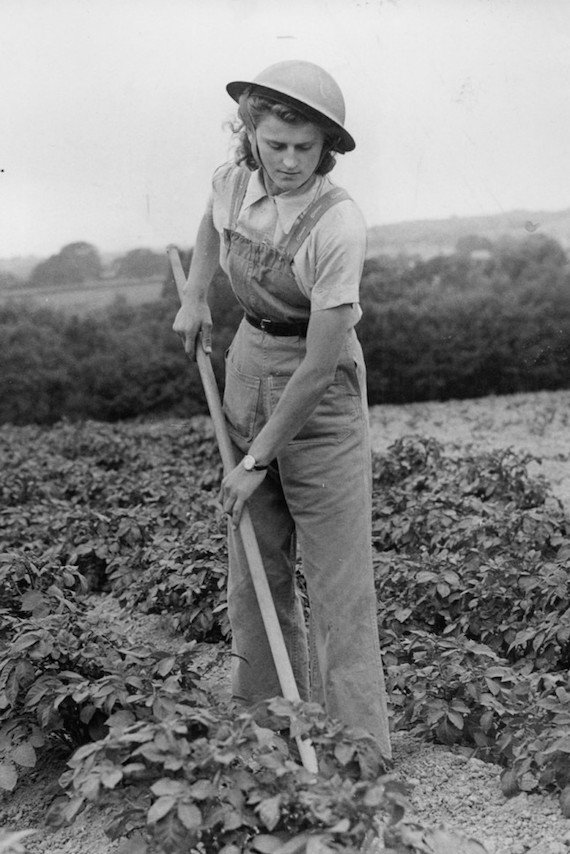 Here’s a Land Girl, in tin helmet and overalls.

A defiantly red war time wedding dress. Via V and A museum.

Ready for the shelter.

Women in a munitions factory, putting shells together.

40s Fashion Men and their Styles from Suits to the Street