Even though 1940s women fashion flourished in an era dominated by war and austerity, 40s fashion trends have continued to inspire generations of fashion designers that followed

From trendy period dresses to the famous A-line skirt, everything characterising 40s fashion trends are becoming “hip” once again in a revival of styles from the 1940s

The 40s fashion trends were largely epitomized by a certain image of a woman’s body. From dresses with wide padded shouldered tops to waists that were cut high and nipped at the top, to the iconic A-line skirt.  In short, 1940s women fashion designers were obsessed with presenting that perfect silhouette of a woman that even today stands as a women’s clothing signature for that period.

Women fashion designers, such as Dior, had a trailblazing influence in firmly establishing women style for that decade.   When Dior’s now famous “New Look” debuted, it featured styles that would later become the quintessential 1940s fashion statement for women.

Dior wowed the fashion world with 40s fashion trends that featured the full length skirt, and paired it with a jacket that was cinched at the waist. That iconic piece of clothing can easily be said to have changed women dress sense forever!

And speaking of 1940s dress sense, while Dior certainly claimed bragging rights for 40s fashion trends that are popular even today; without fashionable women to adopt some of his creations, 1940s women fashion might not have been what it ultimately became. 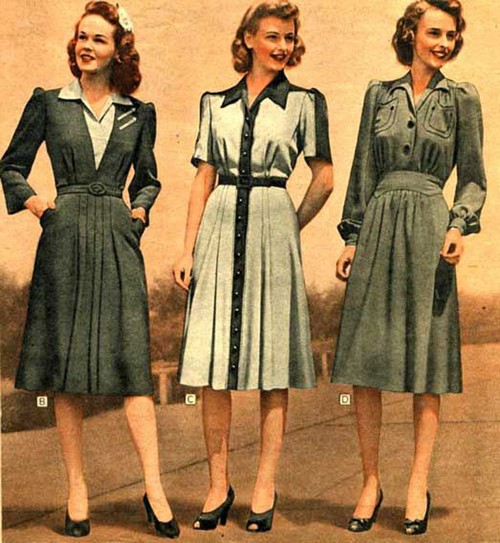 Hollywood actresses, and other show business personalities, played an important role in furthering 1940s fashion trends. Back then, one of Hollywood’s most glamorous women was Ava Gardner. Many 1940s women dress designers owed their fame to ardent adopters like Ava. What screen icons like her wore, ultimately became women style must-haves for the general population too!

Her belted waist dresses and trench coats, paired with stunning scarves and neck-kerchiefs set that look as one of the more iconic 40s fashion trends, with many other actresses following suit.

And who could forget Bette Davis – a women fashion icon of the 1940’s in her own right, and a pin-up-girl that took the world by storm! Women’s 40s fashion trends were greatly influenced by Davis, especially her seductive dresses and her use of the iconic 1940s women garment of choice – the A-line skirt!

Women’s 1940s dress sense had a lot more inspiration to follow, so no wonder that was a period that really took woman fashion to a whole new level.

Doris Day, Katherine Hepburn, Rita Hayworth, Ginger Rogers…and a slate of women style icons continued to embrace the latest 1940s fashion pieces of the time. No sooner would designers come up with a new 1940s dress idea, one of these fashion divas would adorn the 1940s fashion scene with it!

Women fashion was never the same after such ardent adopters in the 1940s embraced and promoted their dresses, skirts and other clothing – both on and off-screen!

Women’s 1940s fashion styles were deeply influenced by the impact of the war.  The post war era prompted women dressing fashion to consider prevailing rationing of everything – from food to fabric and accessories. The 40s fashion trends were therefore modeled on “utility clothes”.

The typical 1940s dress featured square shoulders, which were often padded to give the illusion of a “fuller figure”, and narrow hips.  A woman wearing a skirt usually had the length end just below the knees. Many ladies interested in women fashion were taught to conserve fabric and other dress-making accessories. Minimalism was the key word in creating 40s fashion trends!

And that’s what heavily influenced womens 1940s wardrobes and their clothing selection.

Women dress makers were encouraged to retro-fit older dresses, and make them more fashionable through creative, yet minimal, design upgrades. And newer dresses were always designed with the “utility clothing” mentality – with only minimum flare and pomp added to them.

Yet, despite all these constraints from a post-war mentality, 40s fashion trends continued to evolve into newer and more ingenious designs. Even women style critics of today agree that those minimalist influences may in fact have led to some 1940s women fashion ideas that are even popular today.

Like almost any other aspect of life, fashion styles are dictated by societal influences. 1940s women fashion was no different. And while certain pre-1940 events did shape 1940s fashion, designers of womens clothing also came of age during the period.

It was during that decade that 1940s women started wearing trousers – or slacks, as they were then called. Until then, pants were primarily a male fashion piece. But societal realities changed all that. While women dresses were common at work, with a large woman workforce, pants became a preferred – and more comfortable – piece of clothing to work in. Gradually, slacks became fashionable not just as work-wear, but also as a centrepiece in most 1940s women fashion wardrobes.

But the post war society also forced other women style changes.  Until then, 1940s fashion designers choose to either create dresses that featured square shoulders, or padded them to give them a slightly fuller look. The easing of rationing meant women clothing manufacturers could become more fashionable in their creations.

And while the A-line skirt certainly defined women style of the 40s, designers also offered women of the period many other fashion clothing to choose from.

Taylor-made dresses could easily give a woman of the 1940s that perfect hour-glass figure all women of that era craved for. And 40s fashion trends took a leap forward when designers created newer and more refreshing necklines too.

You could opt for the conservative square look, or a buttoned-down V-shaped look. Women dresses could also feature a slit neckline, or other vintage designs like the keyhole or the sweetheart neckline. In other words, despite an era of minimalism that preceded it, 40s fashion trends really came into their own as a result of societal changes that occurred during that decade.

Today, 1940s women fashion trailblazers like Slacks are still in vogue, preferred by millions of women around the globe. True, the cuts, shapes and flows have changed from those that first appeared on the 1940s fashion scene; but fundamentally they remain a woman style icon very much like they were back in the 1940s.

The humble teenager skirt that burst onto the scene as part of the 1940s dress revolution, is also very much alive and well amongst younger girls today! Sure, the skirt of today is much shorter in length; and the fabrics used are vastly different from those that 1940s women were familiar with. But as a fashionable wardrobe piece, it still remains as wildly trendy as clothing from the 40s was back then.

Other 40s fashion trends too have survived and thrived, despite the many decades that have passed. Stripes and plaids, that were popular in women fashion back in the 40s, are once again becoming hip and trendy today.

From dresses to skirts, and from blouses and jackets, women style designers are including these popular elements in their contemporary clothing lines, leaving no doubt that 1940s women fashion has survived through the decades!

full length skirt, paired with a jacket cinched at the waist