Despite the tectonic changes in fashion trends over the past century, the collared shirt managed to become a Mens 40s fashion icon and still remains such, even today.

When you think about it, shirt collars almost never seem to stand out as “fashion statements” today, as they did in 1940s fashion. Today’s collared shirt isn’t radically different from what it was in the 1960s or 70s. Yet, they were hallmarks of mens 40s fashion trends.  By just altering the height, length, spread and shape of the tapered ends (points or rounded), collars on the collared shirt drastically transformed how men looked in their shirts. 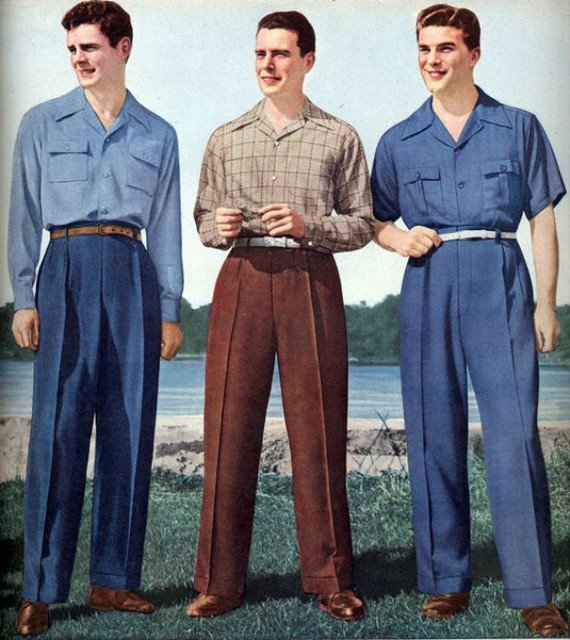 Shirts have long been a staple in the wardrobes of men for centuries. Of course, their styles and designs changed over time.  Mens 40s fashion included a great selection of shirts, both formal and casual. But whether it was a dress shirt you were after, or something for after-office wear, it would typically be a collared shirt that you would wear for the occasion.

The colours too were starkly different from prior decades. While you would certainly find men wearing darker shades, like navy blue and black, mens 40s fashion colour was all about lighter and pastel hues.  For instance, colours like light blue, cream, white or light pink and tan were commonly in vogue.

Typically, the collars on the collared shirt that men wore during the 1940s, were available in different shapes and patterns. Evolution in fabric technologies, and the availability of better-quality starch, gave mens 40s fashion designers the tools to reinvent the typical shirt collar worn until then.

You would frequently see a man dressed in a navy blue suit, sporting a bright red tie around a white collared shirt. But popularity of the eyelet collars and short, round collars from the prior decade was now beginning to wane.  Instead, the sharp, pointed collared shirt – also known as the spearpoint collar – was favoured. 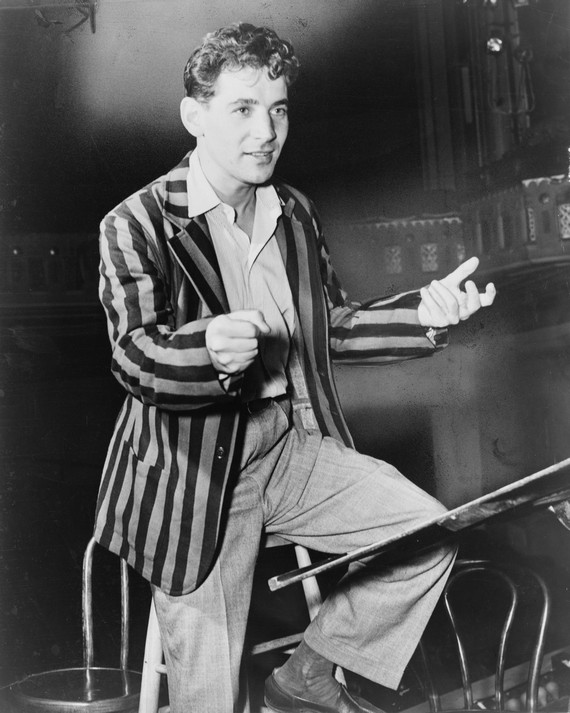 But by the mid-1940s, mens 40s fashion was experiencing a mini-revolution. There was a tectonic shift in the types of suits and jackets that men preferred to wear, and that meant the look and style of the collared shirt had to change too. Sure, you could still buy that favourite navy blue blazer you so loved, but it would have a radically different shape and cut.

Zoot-inspired mens 40s fashion changed how men preferred their shirts to be designed. Because of this new trend in suit design, the spearpoint collar seemed to be out of place. Their suits were wider-cut affairs – big and bulky – with baggy pants. And that brought about a revolution in the collared shirt too.

By 1945’ish, that man in the big, bulky navy blue suit was more than likely to be wearing a collared shirt with a wide spread point collar underneath.  Designers gave men what they wanted also because of evolutions in how necktie knots were evolving. A collared shirt had to support your necktie, and mens 40s fashion was quickly adopting the Windsor as the knot-of-preference.

So, what did that mean for the collared shirt with the wide spread point collar? It meant that shirt designers had to create shirts with collars that were longer than usual, and much wider too. Evolution in mens 40s fashion was all about being practical. Since the mechanics of the Windsor knot didn’t particularly support the low-profiled slim collared shirt, the collar had to be transformed – yet again! 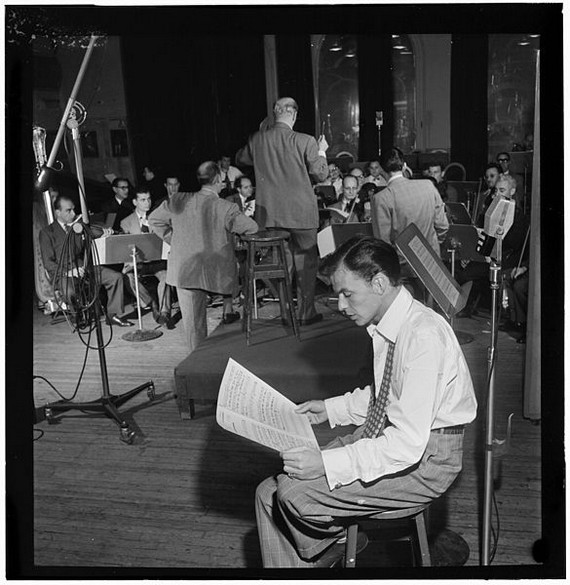 The collared shirt changes yet again

But that wasn’t the end to changes that lay in store for the man in the navy blue suit wearing a humble collared shirt. By now, men in suits were gravitating towards bow ties. And that meant that neither the spearpoint nor the wide spread point collar would do. Mens 40s fashion had to evolve, yet again, so that the man in the navy blue blazer or Zoot suit could fashionably wear his bow tie.

Mid-to-late 1940s mens shirt designers pondered on that shift for a while, and as bow ties became a fad, albeit a minor one at first, mens 40s fashion changed to meet the needs of bow tie-loving men all over. 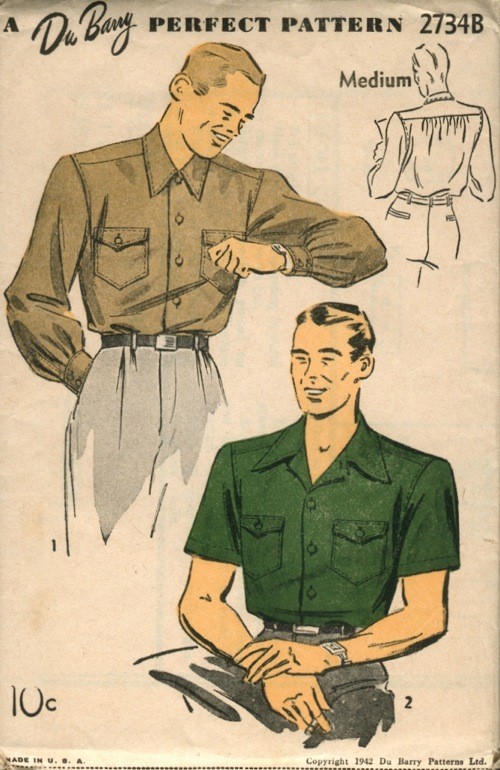 And so, the collared shirt from the 1940s inherited the convertible collar. This design masterpiece was also known by other names, including the camp collar or Cuban collar. The idea was that, when wearing a bow tie, this button-down collar would help keep that piece of mens 40s fashion securely in place. The man in the navy blue suit or blazer would now look even more at home in his bow tie, than he would if he wore it with a collared shirt sporting a spearpoint.

But what about casual shirt wearing men? Surely mens 40s fashion was not all about shirts worn under navy blue suits and jackets? Not at all! Men in the 1940s also wore shirts without blazers, jackets or suits too – and the convertible collared shirt allowed them to do just that!

Far-thinking mens 40s fashion designers, of the collared shirt with a convertible collar, fashioned their creations to be worn with either the neck button unfastened, or fastened. So, if you wanted to wear your shirt under that favourite navy blue jacket of yours, simply fasten the button, and clip or tie the bow around your neck. For a more casual look, unfasten the neck button of your collared shirt, or perhaps even the one below that, and you can still pull off a dapper look in that navy blue suit of yours! 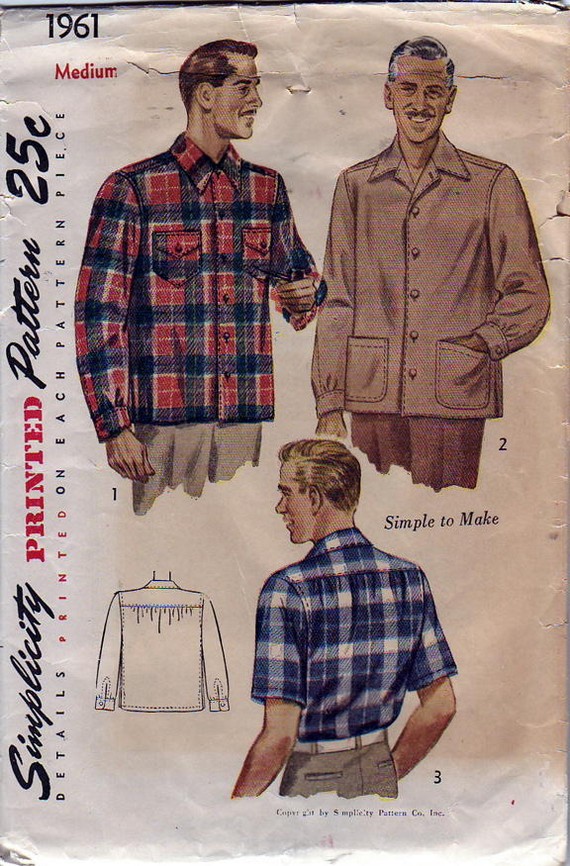 Whether you wore it for business, pleasure, sporting events or to get a casual look, the collared shirt remained a staple in mens 40s fashion. A lot has changed over the years, as mens fashion adapts to changing trends and tastes.

Shirt colours have grown darker, lighter and darker back again. Navy blue Zoot suits have given way to straighter and slimmer-cut fashion. Women have more readily adopted men’s fashion, with the appeal for unisex apparel on the

What was once a staple mens 40s fashion icon, still very much remains such!

Mash up your Retro-Modern Style with 40s and 50s fashion

Mash up your Retro-Modern Style with 40s and 50s fashion