London Fashion Week Men’s – LFWMAW18  – went ahead at the beginning of January with a strong showing from both new and established designers. See Now Buy Now is an experiment that has now almost entirely fallen by the wayside, with just one designer (Bobby Abely) attempting it, and only six shows this season showed both women’s and menswear.

Here are some of the LFWMAW18 highlights.

Kent & Curwen via The Glass Magazine.

Kent & Curwen have been making much of their association with majority shareholder David Beckham, which apparently helps them go over really well in Asia. So British, you see. Apperently at the launch dinner for their new shopm in Floral Street they served pie and mash. So, so British. And in case that wasn’t British enough, for LFWMAW18 there were plenty of rugby shirts and sweatshirts with the English rose on them, trench coats, blazers, schoolboy scarves and even the bizarre and creepy schoolboy cap they showed last season. In fact I can’t see a blind bit of difference between this season and last. It’s all perfect for the grown man who wants to cosplay an English schoolboy. 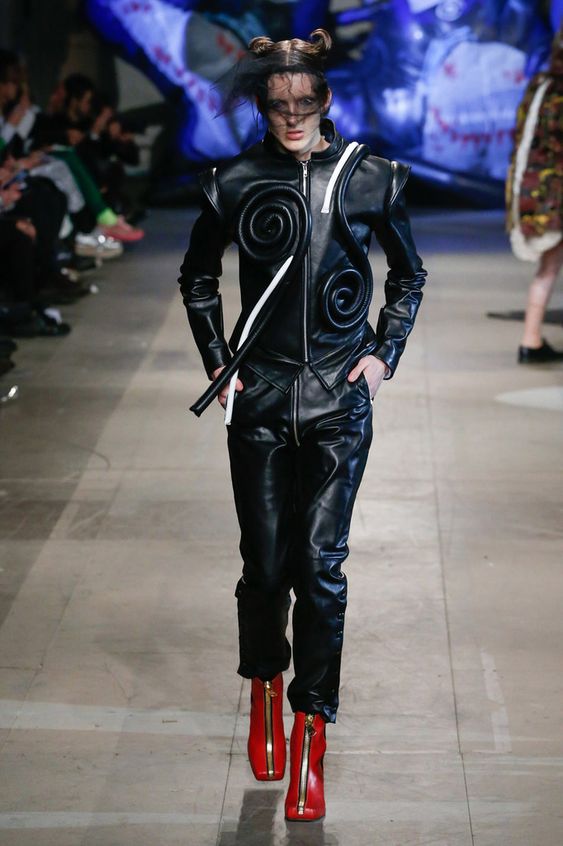 Charles Jeffrey is inspired by his friends on the club scene and always does a show that is dramatic. This season it was fairly straight forward – only models walked the catwalk, not giant papier-mâché monsters and they just walked up and down it in a fairly normal manner. Well, there was one guy carrying a pediment on his head who required a couple of supporting caryatids. But other than that, fairly normal.

Jeffrey is of the Gareth Pugh school of fashion: that is, an excellent designer with true compositional and cutting skill overlaid by headline grabbing flourishes. So this season at LFWMAW18, as before, he used a crew of non professional models of all genders, with wigs, face paint, and props aplenty. But beneath that, his clothes are dizzyingly desirable.

He has here experimented with volume, with padded shirts and puffed up sweaters. Jeffery likes an oversized detail, so there are swirls of Schiaparelli-like cording blown up and applied in loose swirls. He likes a trouser with a military stripe, he likes kilts, he likes oversized jumpers and overcoats, and he likes a nice broad belt to draw these items in, preventing them from overwhelming the body. Stunning.

Craig Green has perfectly captured athleisure. His cropped track pants are wide enough that they look striking, but the colours are muted: standard grey marl and black, teamed with matching zipped tops. He also has some version of a nylon utility suit in black and beige; despite their cartoonish proliferation of pockets they look practical. A waist mounted satchel – too big to be called a bumbag – somehow still looks minimal and muted despite its proportions and may be handy at the airport or during a futuristic war.

I realise it might be odd to focus on these garments when next to them on the Craig Green LFWMAW18 catwalk is a topless model with his head obscured by a balsa wood and latex structure, but it’s just how it is. 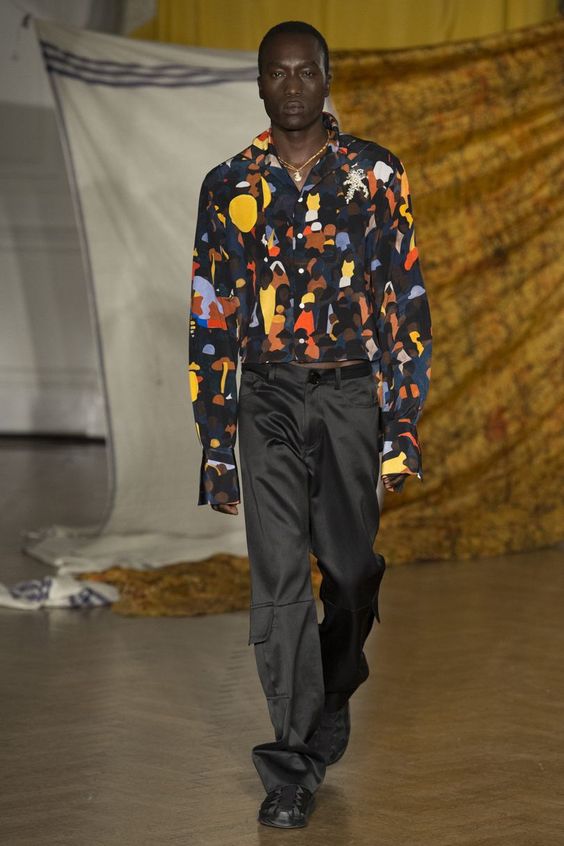 A beautiful, beautiful show from Wales Bonner for LFWMAW18 . Opening with a perfectly cut asymmetrically fastened suit jacket, it went on to both an 80s vibe with chic printed neckerchiefs and loud boxy shirts printed in the same black and white pattern, and to look in on the 70s with slim fitting cream safari suits. There was also some 90s women’s wear showing its influence, in some fluid low rise trousers and cropped tops.

Christopher Ræburn has a lot of specially woven black and white tape that he needs to get rid of and he’s still incorporating it as bag straps and drawstrings this season. “Remade Reduced Recycled Ræburn” it announces, as a way of making sure you know all about his design philosophy.

Ræburn produces athleisure and was one of the designers who showed women’s wear as well as men’s in LFWMAW18. His women’s clothes have always seemed an afterthought to me and this season it’s the same: a fluffy fleece roll neck greatly resembles one from M&S which I sleep in and padded jackets look like they came from Uniqlo.

Christopher Ræburn was recently chosen to redesign staff uniforms at the Victoria and Albert Museum, and, unfortunately true to his aesthetic he chose a palette of blue and orange, and a range of t-shirts, fleeces and anoraks that, visitors complained, made the invigilators look like a party of hikers who had dropped into the museum for a quick refill of their flasks before heading onward. His work for LFWMAW18 is elevated above that and slightly more sophisticated but I’m not entranced.

Astrid Anderson is missing the chance to get her name on her clothes either for LFWMAW18 . However, this may be more forgivable since it is styled in a way reminiscent to basketball or baseball shirts, clearly evoking the sportswear it has evolved from. However, this is sportswear with lace panels and floral prints, fur collars and patch-worked silk. It will be familiar to her fans, this sports-extremely-luxe, and a popular choice for the man who wants to stand out just a little. 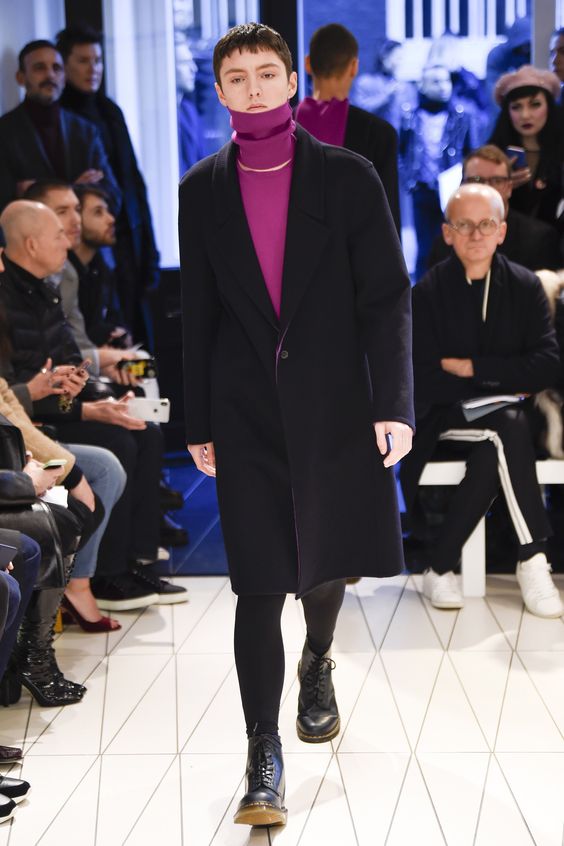 The infamously cerebral designer presented a collection at LFWMAW18 with clean lines which was highly wearable. Restricting himself to a mostly monochrome palette there was a single blue, red, black and white print and an all golden outfit featuring a turmeric turtleneck, which segued the collection into browns and beiges.

Shape wise, it was a collection of a mixture of gentle origami folds, fairly traditional slim cut tailoring, and a bit of sportswear, too. The shoe of choice was the Doc Marten in different, muted colours. The only real quirk was that many of the models forewent trousers for tights.