London Fashion Week LFWAW18 has just finished for another season. So who gave the best catwalk?

Matty Bovan has been showing with Fashion East for the last three seasons, and as with many of their brilliant discoveries, has now made a big enough marl that he’s ready to step out on his own. This was his first solo fashion week show.

It featured his signature layered and shredded look, with lots of tweeds, lots of boucle and chenille knits, overlaid on tie dye and paint spattered jersey. Some of it looks far too much like a Camden market stall twist on Chanel’s classic suits, and the ball gowns with tulle layered bottoms and tightly tailored, almost moulded looking bottoms looked too Alexander McQueen. One to watch, it’s clear, but for me he hasn’t quite got there yet. 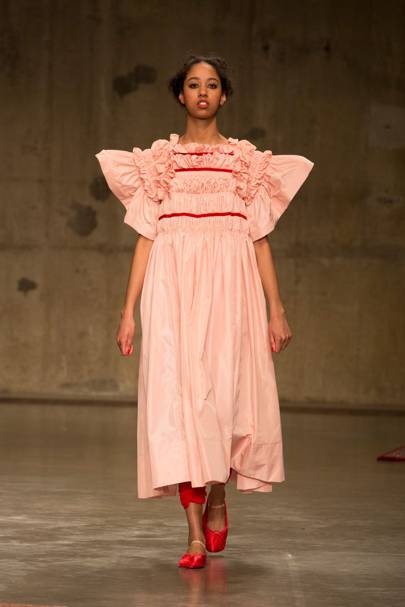 Was that a cigarette on the catwalk in Molly Goddard’s first look? Is she trying to prove that her models aren’t children in dressing up clothes? For LFWAW18 Goddard sticks with her beloved tulle and her awkward, child-like proportions, and I have to say, when she doesn’t as in the fitted midnight blue satin jacket with the 80s gilt buttons it doesn’t really work. It does all have a certain charm but, although I loved the dresses my mum made for me when I was five, I’d feel too Oedipal wearing them now.

Hussein Chalayan’s work for LFWAW18 was elegant, still cleverly and unexpectedly constructed but for the most part extremely wearable. Let’s discount the sudden swoop into dubious 1980s territory and avert our eyes from the half silver lame, half silver leopard print dress, and likewise the coat with enormous shoulders and purple collar. The opening looks with filmy chiffon sashes/wraps/tails looked like the sort of thing that might be intriguingly incomprehensible on the hangar, but very good once you’ve figured it out and pulled it on. 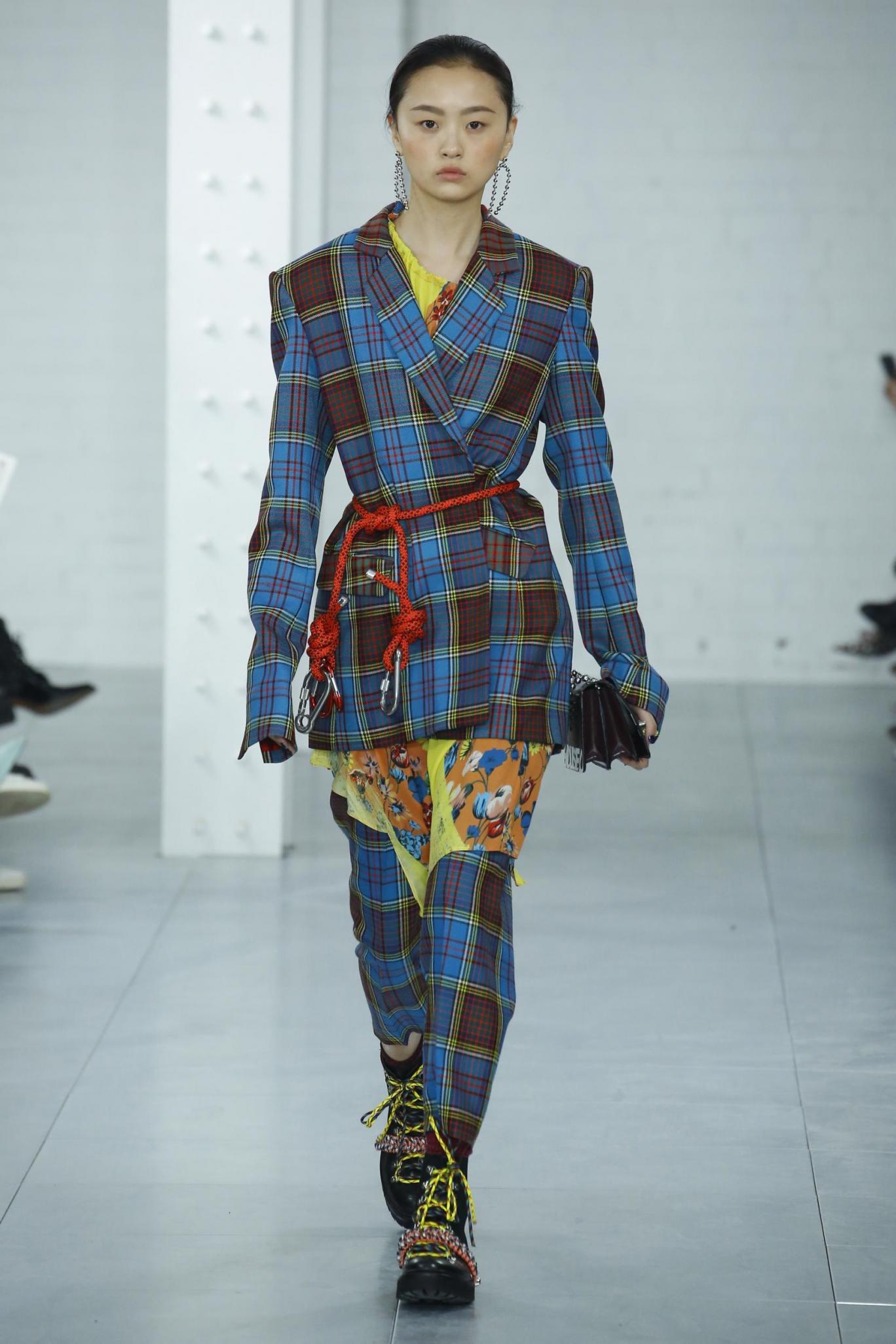 Henry Holland presented an endearing jumble sale look for LFWAW18, with House of Holland logoed scarves and caps worn with lots of sports wear and mixed and matched filmy chiffon. Hiking boots with multiple laces were his own version of the ubiquitous Doc Martens of the 90s, worn with everything. There were down jackets in massive proportion, sequin skirts, camo and plaid. Cheerful. 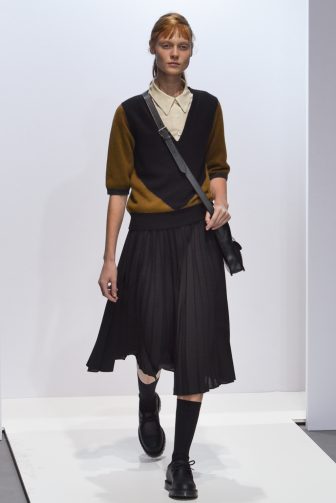 Margaret Howell is the antidote to House of Holland, and palette cleanser of no nonsense after the excesses of the younger Fashion Week crowd. Her opening look for LFWAW18 was a surprise then: a silk tea dress in swirling 70s print and colours, but with neat black collar and buttons and primly accessorised with black belt, knee length black socks and black lace up shoes. The same fabric was used in a silk shirt worn as part of Howell’s more usual look, with cropped woollen trousers, simple tweed jacket and a black beret.

Not as established as Margaret Howell, but I’m covering Palmer/Harding LFW AW18 for more calming looks for grown ups. They opened with some of their signature shirts in striped blue and white cotton. This classic colour combination cropped up regularly but in between, russets, browns, peach, green, khaki and gold varied the collection. The crisp cotton shirts in varying proportions, details and cuts might be their speciality, but silky trousers and classic trenches provided notes of interest too.

The “Queen of Print” is still interested in colour and print but it’s in a much more toned down for these days than her eye-popping debut. The show opened with a trompe l’oeil Grecian inspired sequin column dress held up with thick leather shoulder straps. The effect was both witty and elegant. Variations on this followed, some with chiffon underskirts. The weight and rape of the sequins made the skirts swing quite deliciously.

A wall paper-like jacquard was used in several colours – silver grey, dusty pink and mustard yellow for suits and trousers, and the same type of pattern also appeared in vinyl and flock velvet. Baroque wallpaper prints are one thing, but I didn’t expect tile designs too. Terracotta, black and white designs reminded me of Victorian hallways. And then there was the padded jackets, buttoned like a chesterfield couch.

Maybe Katrantzou has been staying in a lot recently? And maybe her home is heavily Victorian? Suddenly yet another strand appeared, a patchwork celebration of Bauhaus and the Weimar Republic. I knew this because the words were emblazoned all over the outfits. And finally another technique of note was dotted in amongst: pointillist images created from strangely spiky sequins. 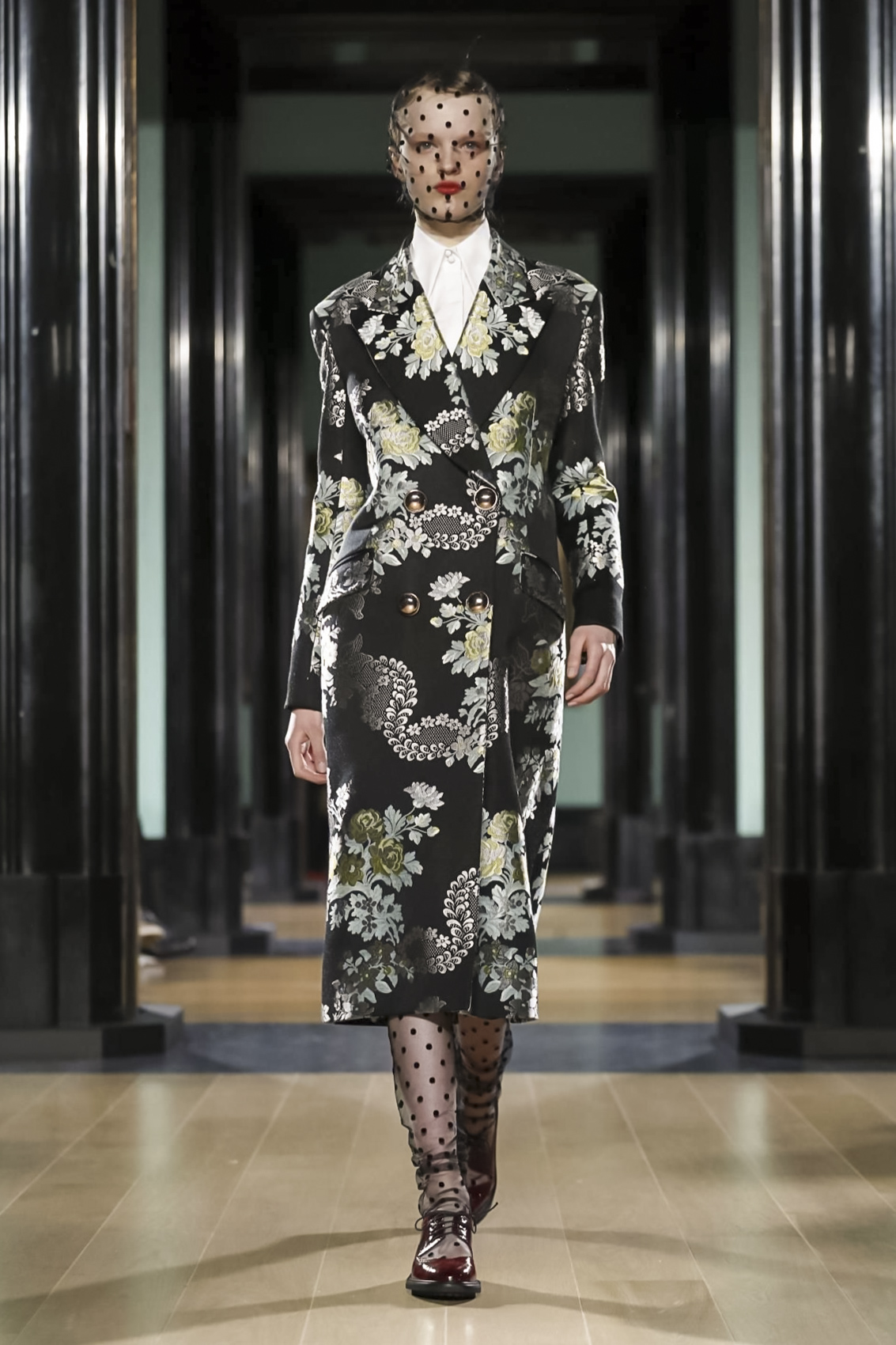 Erdem doesn’t disappoint in LFWAW18 with a selection of gorgeous gowns in jewel like velvets. There are perfect evening jackets in floral jacquards and (I’m hoping faux-) fur. Many are overlaid with a pretty dotted tulle in black or white and quite a lot of use is made of heavy silver sequin fabric, to slinky effect.

Then there is the tailoring section. Suits, capes and overcoats come in tweed and windowpane checked wool, as well as corduroy. Pretty and perfectly executed. 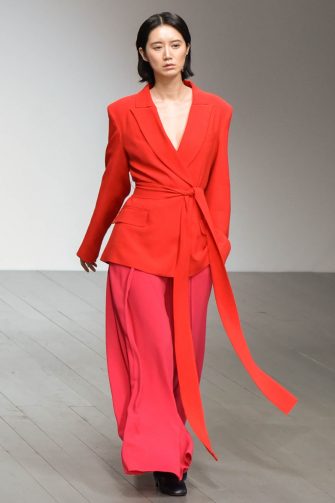 This season Teatum Jones presented a wonderfully feminine show, opening with an all-white dress and following that with a number of outfits in scarlet, fuchsia or a combination of the two. Simple, heavy satin dress in vibrant colours draped beautifully while loosely belted blazers were worn over swishing palazzo pants. Pleated chiffon and pleated satin were cut into long skirts with handkerchief hems. The colours progressed beautifully from reds through to blues, blacks and finally back to all-white again. Very wearable, and especially expect to see the suits in an office near you soon.