For LFWMSS19 we saw some good theatricals, lots of utility and athleisure as expected, quite a few brands looking towards the environment, and more who have decided that condensing their brand offering of men’s and women’s lines into two catwalk shows a year rather than four makes sense. 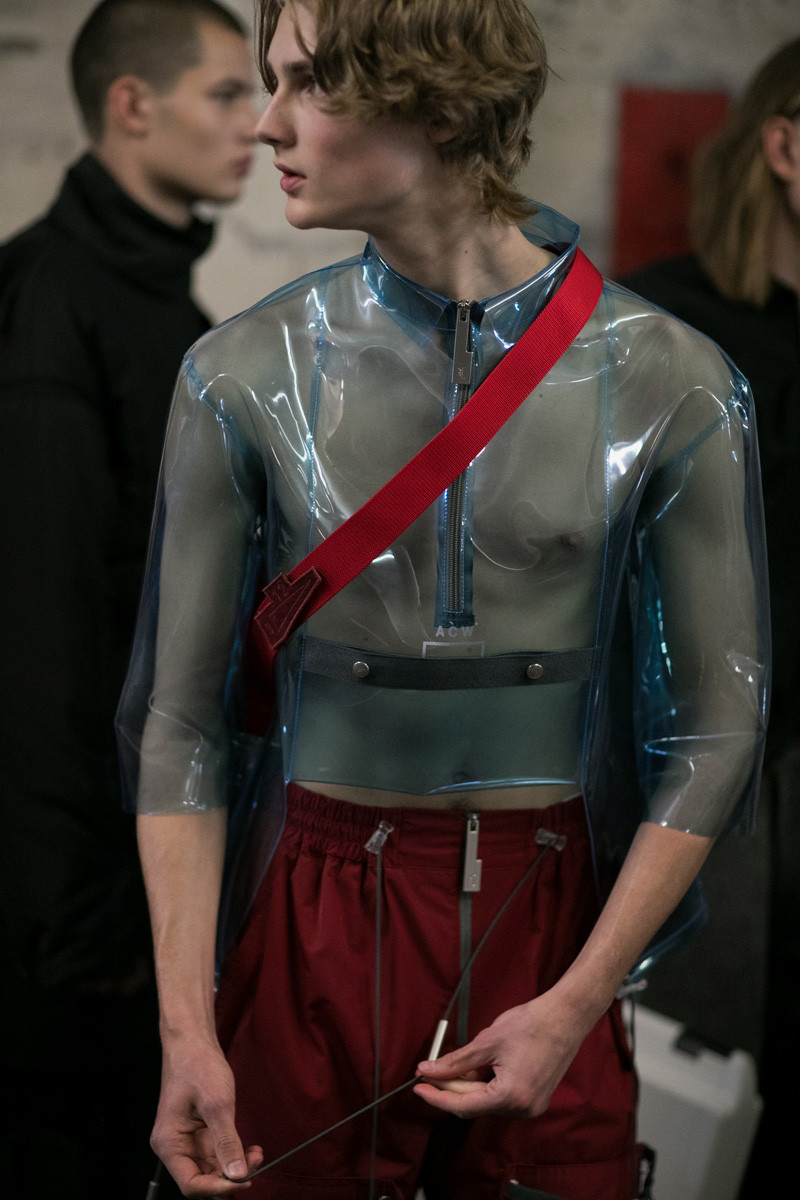 Everyone has been on tenterhooks, wondering what LMVH winner and Virgil Abloh’s protégée Samuel Ross would give us for his A-COLD-WALL collection. He did not calm the crowd down one bit by having them presented with dust masks, ear plugs and protective goggles as they entered the show space. Was the building to be demolished around them? The audience nervously put them on. Slightly disappointingly there was no actual danger, but the show was very dramatic. A corps of performers, dusty white painted and in identical dresses with hoods huddled in tight formation together and paced the runway, menacing the crowd to a sinister soundtrack, before the models rushed out in a hurry.

They were dressed in dystopic-utility-chic, all combat trousers with multiple pockets and zips, clear raincoats, extra straps everywhere and strange ways of wearing bags. Sportswear with a distinct edge. 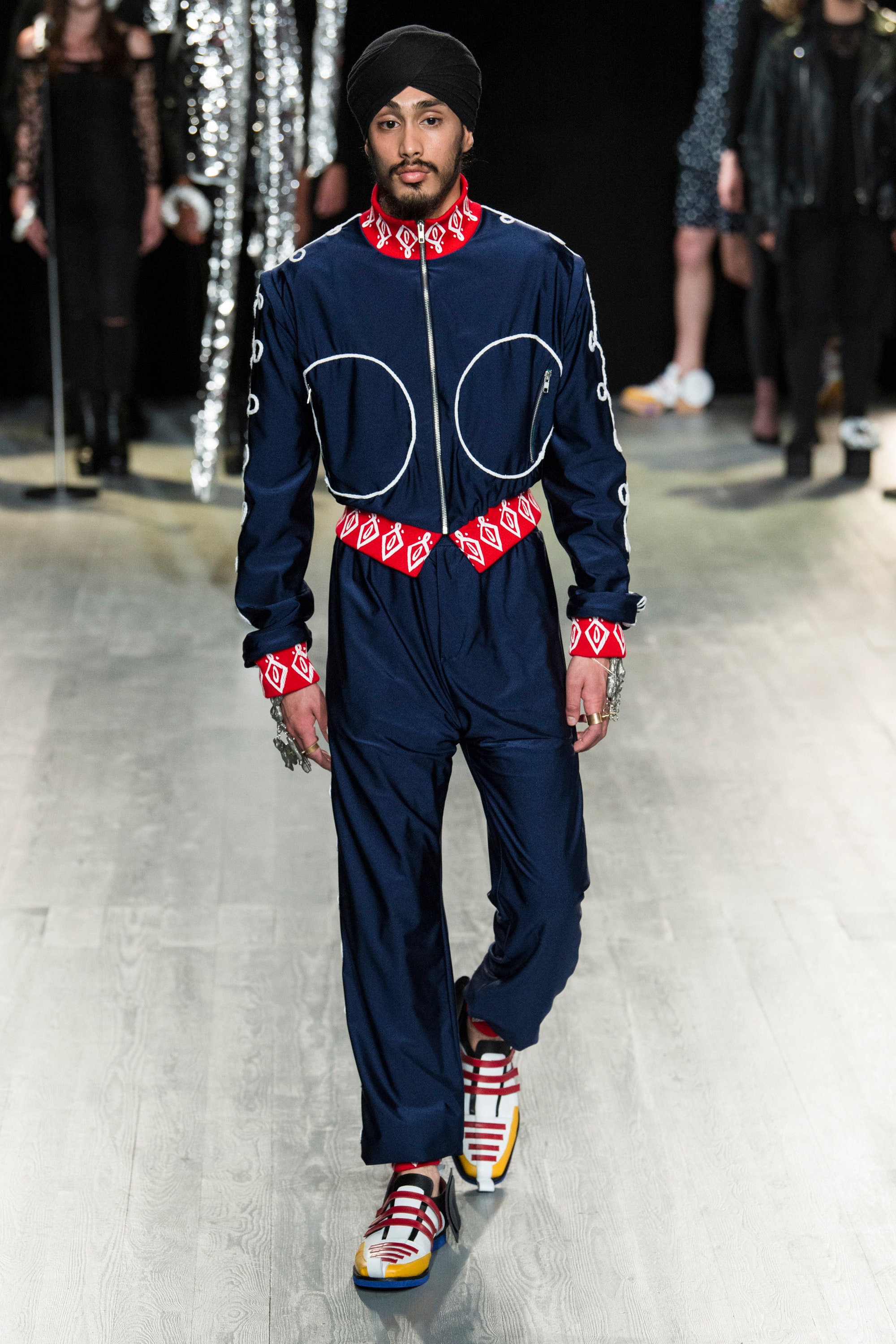 But away from the theatrics, Charles Jeffrey’s designs are settling into a very smooth groove indeed. His themes are become signature – tartan for his Scottish roots, volume, historical references, trompe-l’oeil illustration and a military touch. These are all here and more – jacquard sweaters are knitted with his name as well as stripy socks, and puffy sportswear has joined the mix. 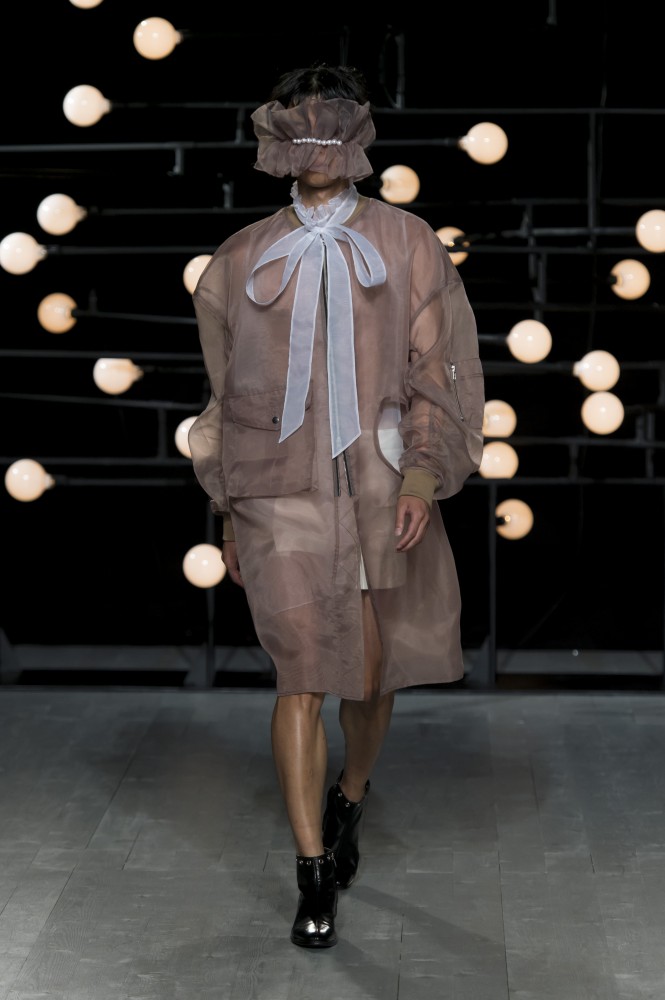 I’m not sure that BLINDNESS have shown at London Men’s before. They are a Seoul-based label who play with the concept of gender. This translates, quite brilliantly, into MASSIVE FRILLS FOR MEN. They are beautiful frills. There are waterfall frills on capes with floral linings, outsize asymmetrical ruffles on organza dresses, pie crust collars, peplums on jackets, and sometimes a lovely giant frill attached to a coat quite randomly because why not.

Also featuring are oversized jackets with little pleated skirts, and a collection of dainty S&M touches like black net tops, leather bralettes and curious ruffled eye-masks. This is designed for men and very attractive, but I have a feeling that as with Grace Wales-Bonner’s menswear whose main appeal lies in its feminine touches, women will flock to this brand and its subversive point may well be lost.

Phoebe English is showing men’s and women’s wear together but not as a unisex or gender fluid collection. The women wear dresses and the men wear trousers. All Phoebe English’s clothes are made in Britain and the decision, she says, was so that the factories could have more to work with at any one time.

The collection is still quite small. Organza dresses and skirts have polka dot detail and the menswear is of simple, Scandi-style design in block colours. 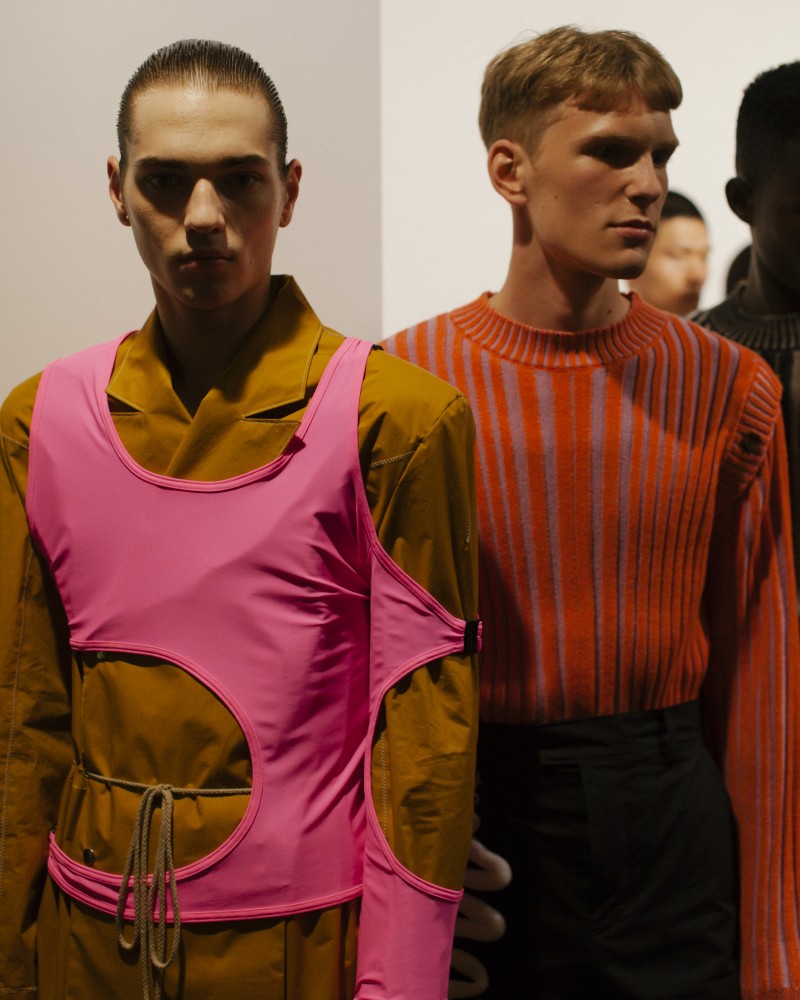 Alex Mullins is another relatively new arrival, as this will be the designer’s fifth showing at LFWM. He showed seven distinct looks, in sets of three variations on each look. The one that will make into most editor’s cuts is the first, with striking neon cut out lycra vest stretched over more traditional tailoring.

Secondly there were pretty ribbed jumpers with contrast stripe and removable sleeves to transform into tank tops, styled with black shorts or ankle length bootcut trousers. Thirdly a broad shouldered, narrow-lapelled baggy suit jacket and trousers with contrasting coloured areas, and fourthly a kind of leather apron with zip pocket worn over a plain white sweater and chequered patchwork trousers.

After that, the same suit shape as no 3, this time in white or blue with fine spattered paint and a round bag strapped across or round the body, like a very chic bumbag. No 6 was fluid embroidered shirts, with slashed or removable sleeves, paired with white high waisted trousers. And finally shiny slub silk macs in three lengths, calf, hip or crop, in gunmetal, khaki and cream, paired with very elegant cigarette trousers in the same fabric. I’ll have a no 5, please. 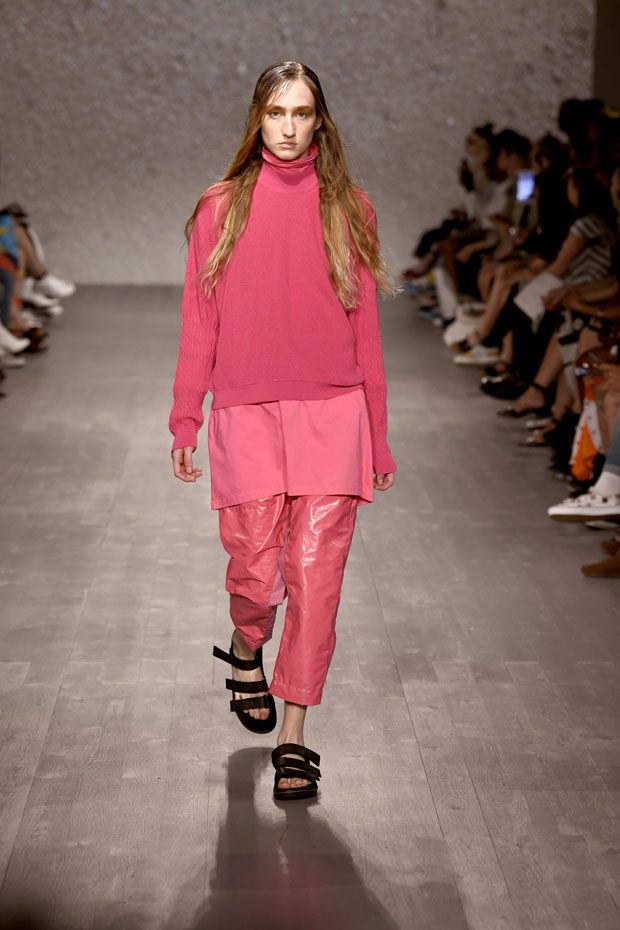 Berthold showed us how modern utility should be done. Layers of practical fabrics were presented in bubblegum pink, sand and black, looking very different with each colour change. Fabrics included translucent vinyls and jersey, with rain macs layered over rollnecks and hoodies, and on the bottom short shorts, knee shorts, cropped trousers and ankle length trousers to cater for every eventuality: after all this was inspired by “The unsettling calm of a desert at dusk” and the spirit of exploration. Most popular will be the branded Berthold bags which come in pillowy oblongs to be slung round the neck. 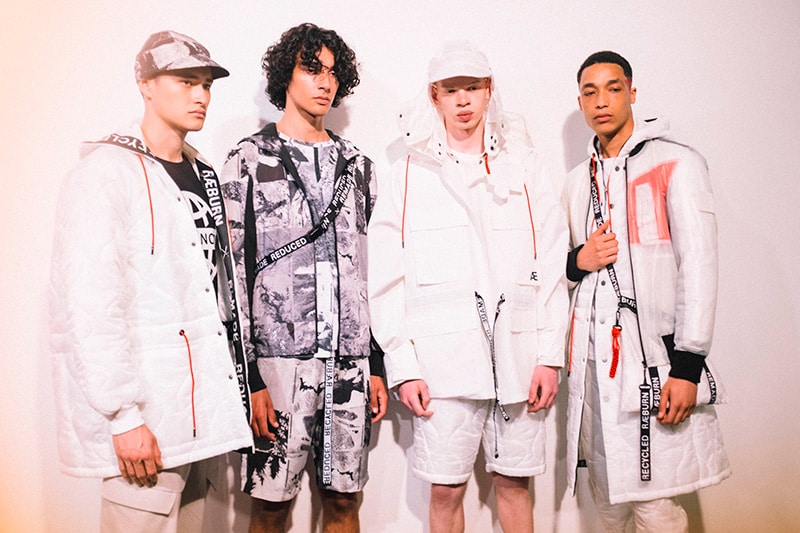 Another example of utility chic, Christopher Raeburn has partnered with Timberland this season so their logo appears alongside his own. I really like this translucent mac trend, here shown in white like a nice sensible pac-a-mac. The padded knee shorts don’t seem nearly as practical, although trouser length and with padded gilets and jackets they make more sense.

Raeburn is showing both men’s and women’s again this season, with almost interchangeable items. His palette is red, white, grey and black, mainly in block colours but with one grey and white graphic print.

Swedish designer Per Gotesson employed a lovely colour palette of neutrals shot through with hot pinks. This was his first solo project, graduating from New Gen. His models emerged from a cosy mezzanine room set and I think he came some way towards his stated aim of “making masculinity sexy without being aggressive”. Models wore frayed denim jackets, deconstructed knitwear, paperbag trousers held up with webbing belts, and lace up sock boots specially commissioned from Helen Kirkum Studio.