Setting up a new fashion label is a huge amount of work and requires so many skills – not just on the design front but in business, endurance and persistence, too. You have to create designs that are different enough to stand out, yet wearable and ultimately sellable, and as a new designer in particular, you just have to have that Something. 27-year-old Charles Jeffrey and his label Loverboy has Something in spades.

A graduate of Central Saint Martins, Charles Jeffrey has had only a couple of years of catwalk shows so far, with three shows with Fashion East and two independently. The first one made people sit up and take interest, but it was the second one that confirmed a truly great skill. Lulu Kennedy at Fashion East is REALLY good at picking designers to support.

The thing is, Loverboy started as a flamboyant club night and so the aesthetic and atmosphere of these first shows is wild, full of collaborators making props, adding music, make up, accessories and modelling for him.

Charles Jeffrey gets by with a little help from his friends. Which is really brilliant because the East London scene is bursting with some of the most vibrant creatives you’ll ever meet, and Lady Gaga amongst others has enjoyed collaborating with different members of that sprawling tribe. Amongst others, Jeffrey works with the set and costume designers Gary Card and Jack Appleyard, print designer Richard Quinn and tailor Sybil Rouge. Theo Adams provides the choreography.

The Loverboy shows for Topshop MAN with Fashion East had included cardboard costumes alongside the models – all unconventional and of many genders, body shapes and appearance. In his first stand alone catwalk show, (SS18, shown June 2017) Jeffrey had dancers in pink cardboard costumes cavorting on the catwalk. Sarah Mower, writing for Vogue said about it “What was most remarkable here was the sense of transformative joy rather than anger that Charles Jeffrey and company communicate together. Choosing to be cheerful is in itself an act of defiance against the forces of darkness, and that feeling ran right through the audience.”

But by the next and most recent show (AW18, shown Jan  2018)  she describes a pre-show performance featuring “a primal-screaming confrontation with the experience of growing up gay. Performers, as in a dregs-of-the-night underground club, cried, howled, and stamped their feet in a repetitive psychotic round of behavior. Even though dressed in dingy, streaked, paint-dashed clothes, with faces smeared with chalky, peeling makeup—faces occasionally thrust into the crowd—they were less threatening than heartbreakingly vulnerable, wounded.”

Charles Jeffrey – an Exploration of Anger 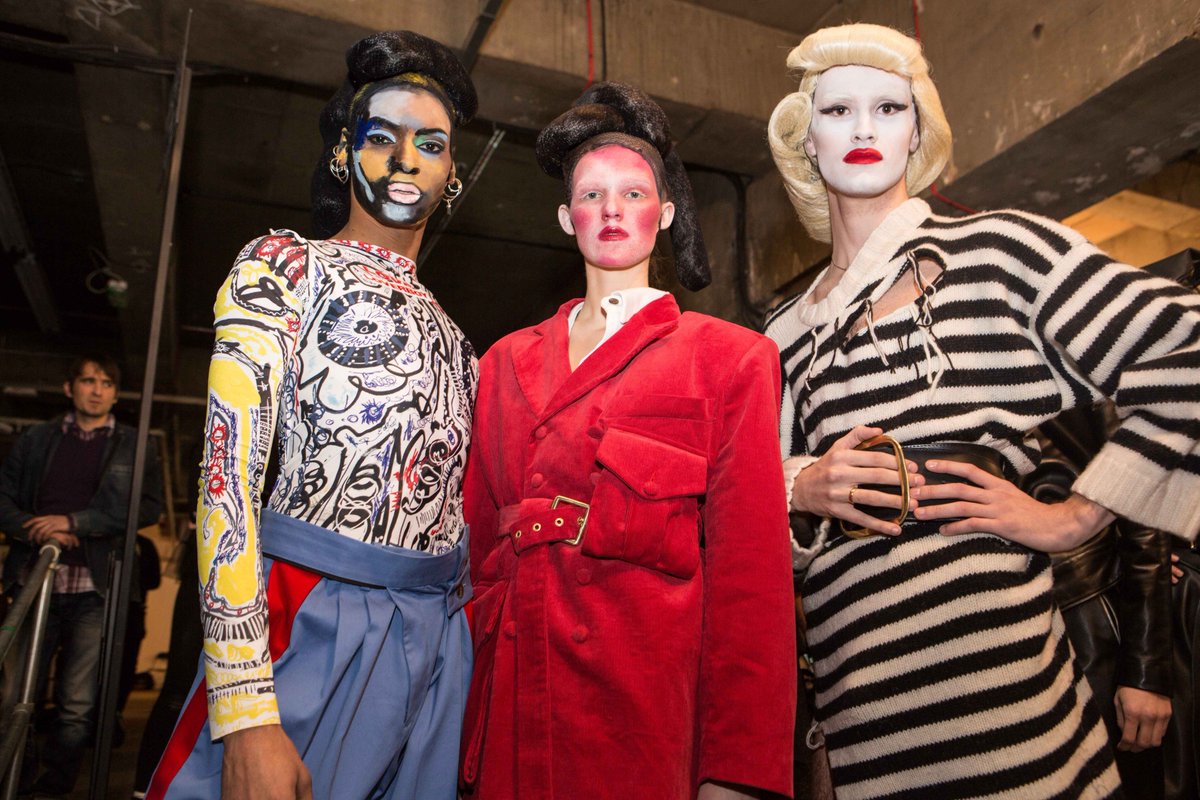 Jeffrey himself explained “There’s growing pains, yes. It’s what you feel from being bullied when you’re young, for being gay. I wanted to revisit those feelings—and that feeling I had on a Monday morning, ‘One day, I’ll show them!’ I wanted to make this show about an exploration of that anger, accepting it, rather than always being joyous and fancy-free.”

At the moment, Jeffrey’s work is very autobiographical, despite the idea of Loverboy being a collective. He not only explores his sexuality, but his Scottish heritage. His work has often featured tartans, albeit loud and overblown ones, as well as Aran knits and accessories like the Tam O’Shanter. But recently he has, rather beautifully, made the connection even more explicit.

In a short film made to accompany his capsule collection for Brown’s, a group of women are gathered around a table in a dingy, empty nightclub. Fingering a piece of cloth, they begin to sing an unmistakably Scottish song, although most listeners would not recognise the words. The women, all dressed in Charles Jeffrey Loverboy of course, begin to push the fabric as the song quickens, finally thumping it on the table and dancing in ecstasy. The song is a waulking song, a traditional tune sung by women as they did exactly this task – thumped newly woven tweeds and tartans around in order to soften the texture. The Scottish song historian Christina Stewart not only consulted on and trained the performers, but features in the video herself.

“Waulking as a commercial activity died out even in the furthest reaches of the Highlands and islands by about the middle of last century. It was an integral part of producing any woolen fabric, but it’s all done in factories now. A real waulking is time-consuming and hard work, but the singing makes it almost meditative and the singers can get pretty giddy with the work and the breathing while singing. By the end, you can get quite a high off it!”

Which may be another reason why this activity fascinates the designer. You sense he and his crew may be no stranger to mind altering substances. His exhibition at London’s Now gallery was entitled “The Come Up”.

Emerging Menswear Designer of the Year 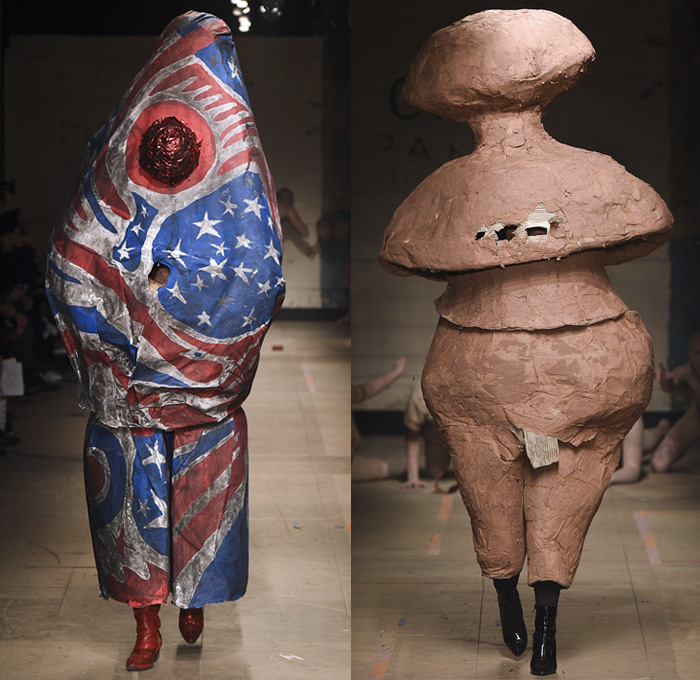 However, all this theatricality, soul searching and back story doesn’t really distract from the actual clothes. It’s not all spectacle and no trousers. Charles Jeffrey makes a very good pair of trousers. His technical skill, design and tailoring underlie the pyrotechnics and he interned at Christian Dior. There is a strong sense of Vivienne Westwood, Alexander McQueen and John Galliano – the British greats – about his work, with its magpie thieving from many periods of history, tailoring in fine fabrics just a little distorted, (he calls them his ‘drunk’ tailoring, which recreates the effect of being slumped in a buttoned-up jacket) those tartan references and yes, the theatricality too.

The fashion industry agrees that he’s well on his way to joining the greats, and he was voted Emerging Menswear Designer of the Year at the 2017 British Fashion Awards.