Matty Bovan is one of London Fashion Week’s new stars. A designer who is happily cresting the new gender-fluid wave, he showed solo at LFW for the first time last week with his patchworked, ripped, torn and layered knitwear and tweeds.

Born in 1991 in York and educated at St Martins before interning at Marc Jacobs and also working briefly at Louis Vuitton and Miu Miu, he won the L’Oréal Professionel Creative Award and LVMH Graduate Prize and was nominated for British Emerging Womenswear Talent at the Fashion Awards 2017.

Matty Bovan, the dress up expert

The 27-year-old Matty Bovan still lives with his parents in York and creates his collections in their garage. He is inspired by his extremely stylish grandmother and mother, who both like dressing up on an everyday basis. Matty too likes dressing up, and his women’s wear is based on clothes he, himself, likes to wear. “I always feel she is a female version of myself, it’s definitely someone who has a strong option on what they like,” says Bovan. “I do feel my clothes are not just strictly womenswear though, and have never considered it so rigid.” 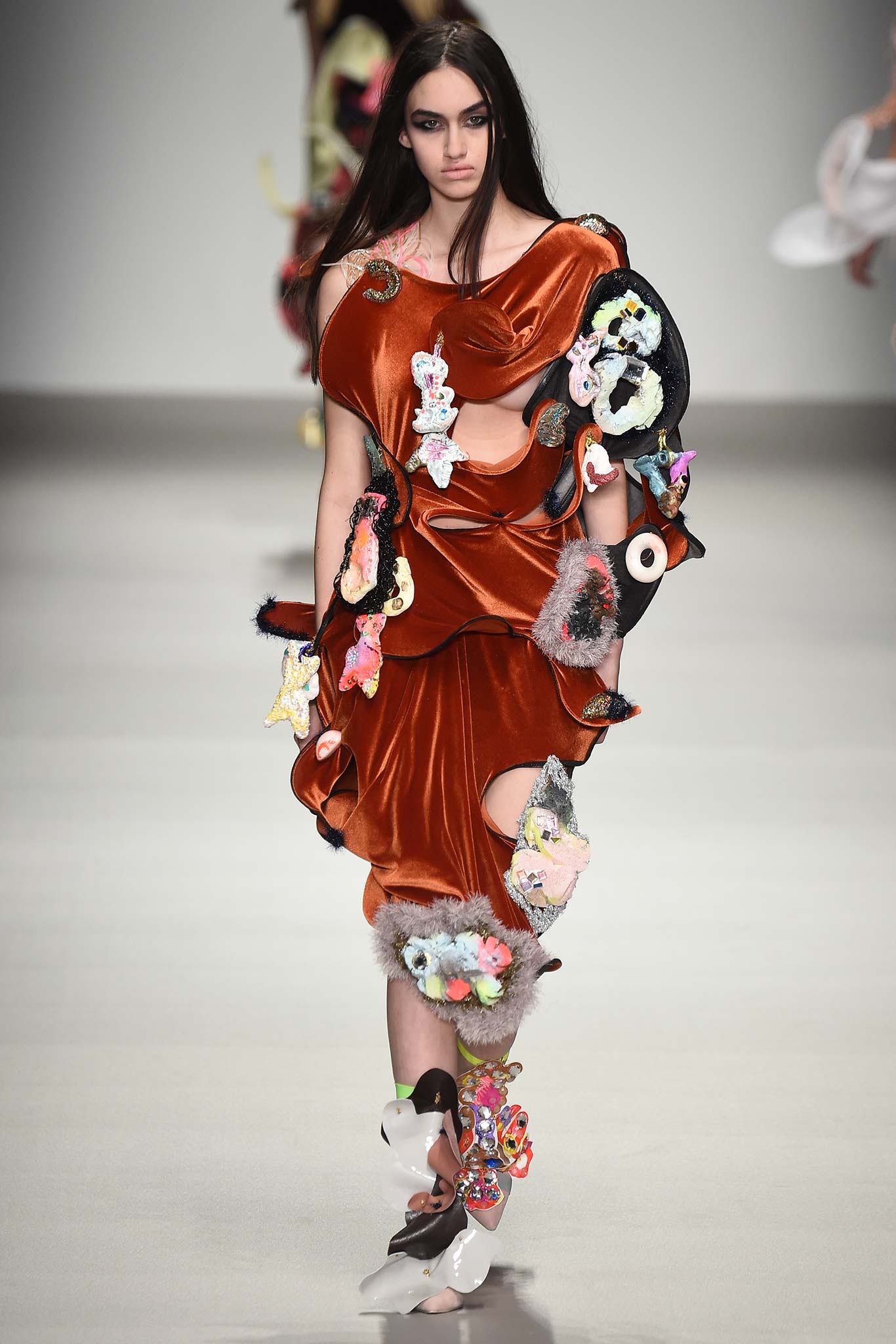 He also admits that his clothes are designed for himself primarily. He uses himself as a fit model or at least tries them on. They look good on him. But he’s well over six foot and of a very masculine shape. Gender fluid or unisex clothes are a good thing, but I do think they need to be cut to fit. Luckily most of his current work is stretchy but on the catwalk there were flashes of underboob coinciding with an apparently randomly placed hole, which may or may not have been deliberate. Matty Bovan is an interesting designer, but I’d hate him to fall into that trap of male arrogance where a man makes a woman clothes she simply physically cannot wear. Reviewing his show, which according the designer was inspired by an idea of post-apocalyptic utopianism and featured much tailoring in his favourite tweed and impressive ballgowns with huge skirts and moulded torsos, I said it felt derivative. And it does. In previous shows, due to his strong knitwear use (Bovan trained in knitwear) I thought he might be going for a kind of messed up Julian McDonald vibe or an anarchic Missoni. Which would be interesting.

But like many young designers showing in London, it seems the ideas of Alexander McQueen, Vivienne Westwood, and John Galliano are hard to shake. Maybe they should be called Big British Three, no, the Lavish London Fashion Gods? The Three Deities? for their influence alone. It didn’t help that he employed the styling talents of Katie Grand and that of Stephen Jones to do headpieces, made of helium party balloons caught in a net. Of course, both the stylist and the milliner have made countless collaborations with the Three Deities which only underlined the influence. That, plus the makeup which was a virtual copy of McQueen’s style, which was itself lifted from the club kids.

However, some reviewers have remarked this increase in slickness is much more likely to give Bovan the step up in sales and reviews that he needs.

But actually, this is the first time that these influences have overtly popped up for Bovan. He has had three shows for LFW under the Fashion East umbrella and and standout MA show for Central Saint Martins. These were much more original. Perhaps he panicked and wanted to make something very grand, and in a tried and tested style for his big moment? Well, hopefully he might feel more at ease next time, and freer to go on with what he started.

Matty Bovan ‘s graduate show was a joyous patchwork of knit, as if he had been very excited to get a go on the fashion department’s knitting machines and just see what he came up with. All these samples were stitched together to create free-form dresses. To create structure, each separate piece of fabric was stretched over a wire frame, or had been edged with wire like the stiff Christmas ribbon you use to make the perfect bow. Bovan was taught to knot and crochet by his grandma and might have been recreating the feeling of being allowed to plunder a knitting stash, with all the odds and ends of balls of wool in different colours and textures. It could have been ugly, but the end result was striking and harmonious.

For Fashion East SS17 Matty Bovan went for a similar layered look. This time it was not chiefly in knit, but using shredded, cheap “sequin effect” lurex, along with some open crochet and spray painted stencil images. AW18 and it was back to the knitted samples, and a hiking boot was the footwear of choice. SS18 was similar, but with the added touch of matching knitted stockings/legwarmers.

For his collection for Matches Fashion, Matty Bovan has really showed his commercial side, pulling the most wearable yet striking aspect of his ideas. It is only three pieces, but focusses on knitting machine fair isle, patchworked into a cropped cardigan, asymmetric skirt and sweater, in clashing yet wearable colours.

It will be brilliant to see where he goes next. The fashion world is watching.

Matty Bovan backstage at his SS17 show with Fashion East. Image via Something About magazine.