Jean Desses was a top Parisian designer during the Golden Age of Couture, alongside Christian Dior, Nina Ricci and Cristóbal Balenciaga. His work was photographed by Cecil Beaton and Norman Parkinson on the top models of the time, and high society patronised his salon. An astute businessman, Dessès brought out four perfumes, and licensed a knitwear line, silk scarf designs and a range of paper patterns for Vogue. Valentino worked in his studio and has inherited his flair for dramatic, elegant ball gowns.

Jean Desses was born Jean Dimitre Verginie in 1903 in Alexandria, Egypt, to Greek parents. He travelled to Paris to study law, but, once there, quickly became enraptured by the magical world of couture and apprenticed himself to a Parisian house called Madame Jane in 1925.

In 1937 he opened his own house at 17 Avenue Matignon, in the building once owned by the Eiffel family. It was designated a Haute Couture House under the official Chambre Syndicate de la Haute Couture. This was shortly before world war two started – a very difficult time for high fashion in France.

Many houses were forced to slash their prices (Chanel was rumoured to have halved hers) and many more closed down altogether. So, it was an audacious move – and one which he and his business survived and even prospered. By 1938 the House of Jean Desses was a marked success.

One reason for his survival was that the French market had dropped greatly due to ferocious import taxes added to Parisian haute couture by US customs, in what was a deliberate move to make Americans buy local designers instead. But Dessès was amid a group of designers including Christian Dior who circumvented that by having works which he designed in his Paris studio actually made by couture-level seamstresses in America via high level department stores.

The gowns were made to order and used exactly the same standard of skill and luxurious fabrics, and were closely overseen by the designers, who sent over not only patterns and sketches but tiny, quarter sized dresses made up to show what the final product should look like without any risk of these show models being sold. These gowns could not be called “Parisian Haute Couture” since they were not made in Paris, but they looked just like them and sold at couture prices, minus the extra taxation.

Desses worked very much in the design idiom of his time. He was not a mould breaker – in the 1940s he made neat tailoring for daywear, in the 1950s his shapes are all hour-glass and in the 1960s, knee-length shift dresses predominated. His ready to wear knitwear greatly resembles Sonia Rykiel’s stripy innovations.

But he did demonstrate great skill in the construction and finishing of his couture, and while the shape wasn’t anything new, in the 1950s he developed a facility in pleating and manipulating chiffon to create breathtaking goddess gowns. The press called them “marvels in draped chiffon that made Dessès so famous and so many women beautiful,” He preferred delicate colours in a fading, ombré effect.

Colours like Wedgwood blue, old rose, pastel green, pale brown, dove grey, faint pinks, and whites made his clients look like flowers. Occasionally, sometimes due to client preference, he broke out and made gowns in dramatic scarlet and black. These signature gowns are of great technical complexity. Made with up to 50 yards of chiffon, they have been likened to Greek sculptures although undoubtedly with more underpinnings. The soft and floaty fabric was always attached to a rigorously boned under construction and lining arrangement.

These gowns are so timeless that they have recently been rediscovered and worn on the red carpet by celebrities like Renee Zellweger, Naomi Campbell and Jennifer Lopez, to much acclaim. But before they discovered him, he was worn by the Queen and royal princesses of Greece, Wallis Simpson, Madame Jean (Lilia) Ralli, the first Mrs. Aristotle Onassis and society hostess Elsa Maxwell. In 1962, he designed the wedding gown worn by Princess Sophia of Greece (who became Queen Sofia of Spain) when she married the future King Juan Carlos I of Spain.

Personally, Jean Desses was charming and popular. He gave good interviews, was a great hostess and the unveiling of his new collections were always packed.

The press liked his work very much, and it was featured in many magazine shoots and in illustrations for the top fashion magazines. His new season innovations were breathlessly reported on.

Jean Dessès had started a ready to wear line in 1949, and in 1960 he closed his couture business and was one of the first big name fashion designers to concentrate solely on ready to wear. These gowns were much simpler but no less carefully made and designed. They still feature boning and shaping techniques beneath the beautiful outer fabric. By the 1960s he was still using chiffon but also much heavier satin fabrics in simpler twists and pleats. He also used dramatic prints and some startling colours, including daffodil yellow and acid green. His ready to wear knitwear was a complete move away from the gowns and tailoring he was known for. 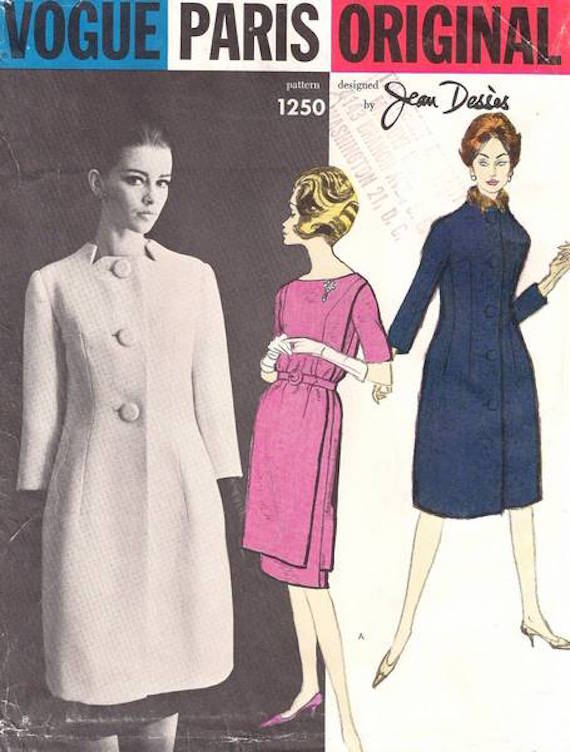 He also licensed silk scarves and accessories, and produced a range of paper patterns for Vogue’s “designer line”. During his lifetime Desses released four perfumes: Celui de Jean Dessès for women in 1938, Eau Novelle for women shortly after, Gymkhana for men in 1960 and Kalispera for women in 1962.

Desses, always busy, had also opened a small boutique in Athens, Greece in 1955. In 1963 he retired with increasing bad health to Athens to concentrate on that and closed his ready to wear line in 1965. Jean Dessès died in Athens in 1970.

Numerous examples of his amazing gowns are held in both the V&A Museum and the Metropolitan Museum, as well as private hands. Because he had closed his couture lable before his death, it wasn’t handed down to new head designers, nor has it been re-opened in the time since, which is probably why his name has faded from view. But both Valentino and Guy Laroche, who worked with him in the 1950s could be considered his spiritual heirs, both picking up much from the master.

Dessès advert for perfume and knitwear.