“We dress ourselves to make someone want to undress us” asserted Versace, and his clothes were all created with that aim in mind. Cut outs, lace and transparent fabrics, and fluid draping that clung to the body revealing all were his stock in trade.

Gianni Versace started his company in 1978 in Milan, with a boutique and a women’s collection. His popularity grew very quickly, and soon, besides his twice yearly collections, he was designing for the theatre and ballet.

Liz Hurley in That Dress. Image via Wikimedia Commons.

The most famous single couture design Versace created was probably the black dress that Elizabeth Hurley wore to accompany her partner Hugh Grant to the opening of Four Weddings and a Funeral in which he starred in 1994. This was no ordinary black dress – slit to the thigh and with a plunging cleavage, it also featured huge gold safety pins that seemingly fastened the dress at the side, revealing further flashes of skin at the same time. This outfit catapulted Hurley, a model and actress of no great renown, into very welcome tabloid recognition. The dress itself became so famous it was known as “That Dress”. 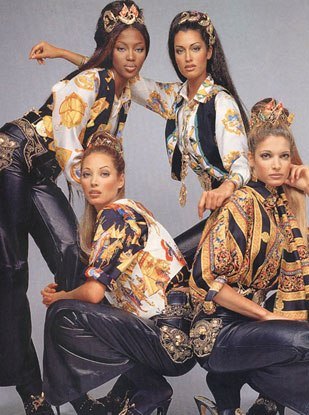 Versace must have been delighted. “I only want to dress celebrities”, he said – or wannabe celebrities, as his designs did have the effect of making the wearer stand out.

Versace also loved to hang out with celebrities too. George Michael and Elton John were not only dressed by him, typically in his brightly coloured silk shirts embellished with gold, but were his best mates as well. Versace even designed Elton John’s stage costumes for his 1992 album cover and world tour.

The supermodels of the nineties also spent a lot of time at his parties as well as modelling for him, with Naomi Campbell a particular favourite both on and off the catwalk. In fact, Versace is credited with creating the “Supermodel” phenomenon, by sending all the most popular, striking and expensive models down the catwalk all in one go and even paying them extra to do so. At that time, they were: Naomi Campbell, Claudia Schiffer, Cindy Crawford, Christy Turlington, Tatjana Patiz and Linda Evangelista. Kate Moss didn’t fit Versace’s original vision of tall, imposing beauty, and only joined the “Supers” gang later. 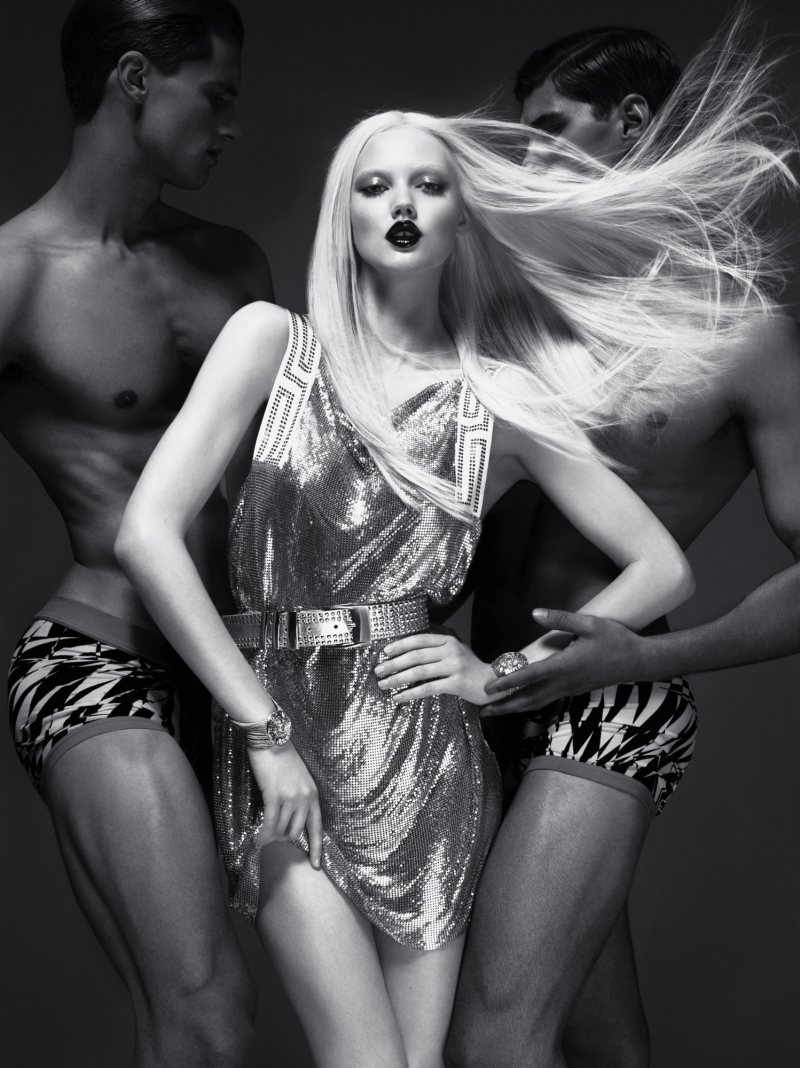 Gianni Versace was greatly inspired by the classical world of Greece and Rome. You can see it in the lines of his dresses, with a recurring theme being column dresses like the drapery of ancient Greek statues.

This is a fashion history constant, from diaphanous 19th century cotton muslin gowns through the “Goddess” gowns of the 1930s, cut on the bias from sensuous silk to drape the wearer alluringly. Versace, however, chose not cotton, not silk, but shining metal. In 1982 he invented a fabric called Orton. It was made from tiny metal plates joined together to make a heavy, but very flexible kind of chainmail which flowed and caught the light like liquid gold or silver. He used it for his own versions of Goddess gowns. The fabric is still used for Versace creations and in October 2016, for her final state dinner as first lady Michelle Obama wore a rose gold Orton dress to great acclaim.

Another influence the ancient world had on Gianni Versace was the medusa head logo he designed in gold. For a long time, because Greek statuary was always brought up from the bottom of the sea or from its underground resting place in pure white marble, washed of any paint, people have assumed that’s how it was designed and that the ancient Greeks lived a serene, monochrome existence. In fact, more recent research shows that these statues and buildings were brightly painted originally. Well, Versace has the right idea all along. He really liked gold, as well as bright colours and oversized motifs, and he jammed them together with his classical influences with a disregard for “good taste”. 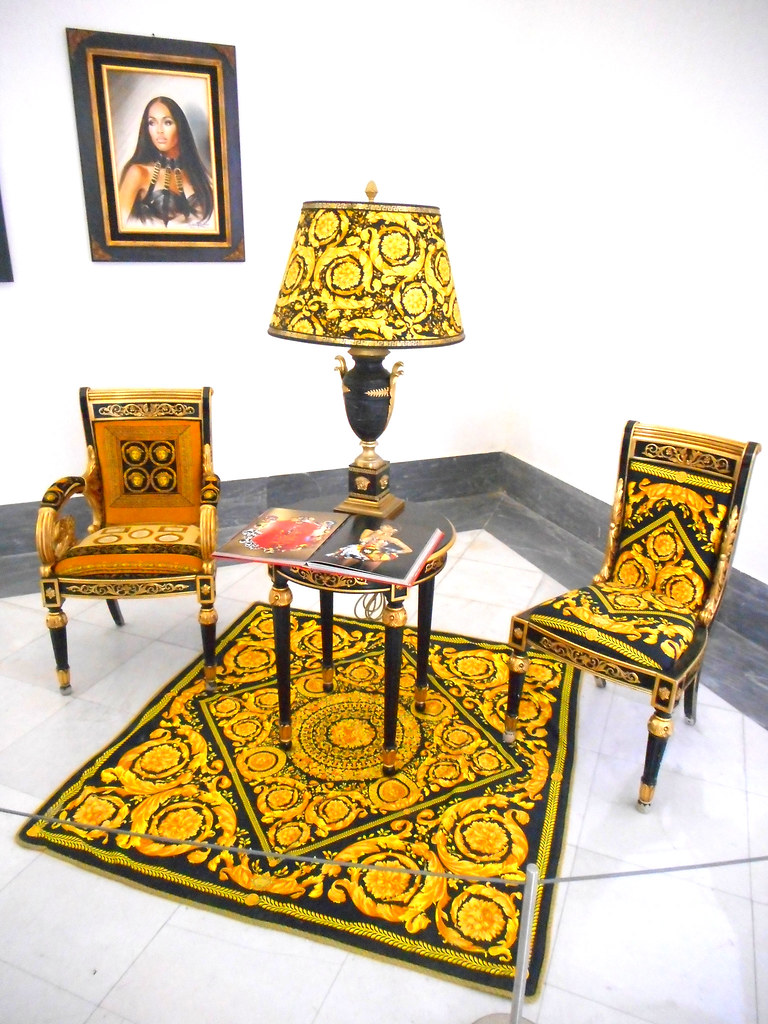 These influences also overflowed in his interiors and home collections. Versace created cups and saucers with gold wings as handles, lamps in yellow with his medusa head as a central motif on the shade and a gold leafed pillar as the lamp stand, and carpets, curtains, cushions, bed sheets, pillows and throws in similar opulent vein. A fine jewellery line was also launched in 1994.

During his lifetime, Gianni Versace was given many honours and accolades. These included several exhibitions and retrospectives in top museums worldwide, including shows that highlighted photographers who had brought his creations to life on magazine pages and shows dedicated to his costume design. In 1986 he was made an honorary French citizen by Jaques Chirac.

Donatella Versace with Gianni Versace in 1990. Image via Wikimedia Commons.

In 1997, Gianni Versace was murdered by a man called Andrew Cunanan. It caused international shock and mourning, as Versace was loved by so many for his generosity and flamboyant personality. His sister, Donatella, took over the company. In the early days Gianni had credited Donatella as his muse; later she was to take a more concrete role in the business, with positions as accessories designer and then as the designer for the childrenswear collection. When she came to take over, after she got over over her shock and grief, she turned out to be a very fitting heir and in the last two decades has kept Versace in the limelight.