Rei Kawakubo, born 1942 in Tokyo, is the founder of Comme Des Garçons and the most radical innovator of the wave of Japanese fashion designers who broke through to Western consciousness in the 80s. “As far as I am concerned, women do not need to have long hair or large breasts to feel feminine” she declared, and acted on that conviction by creating clothes with padding in the most “unflattering” places – not at hips and bosom but irregular humps, lumps and bumps all over the body until the models looked deformed.

Rei Kawakubo studied art and literature at Keio University and worked in advertising before becoming a designer, a vocation she was convinced she would succeed at as well as any man. Hence her brand name, Comme des Garçons (like the boys). Because just as now, the number of women who enrolled at the famous Bunka College of Fashion in Tokyo far exceeded the number of male students, yet successful male fashion designers were plentiful whilst female designers stayed in the background. However, Kawakubo eschewed Bunka altogether and taught herself. She was working in the advertising department for a small textile firm where she occasionaly styled product photoshoots, finding props and costumes for photoshoots. At the encouragement of her colleagues she left to become freelance stylist.  When she couldn’t find the piece she wanted, she made it, and that’s how it all began.

In 1969 Kawakubo began a line of clothing, which she called Comme des Garçons. She designed the typeface logo herself. Her small team included Tsunami Tanaka, who is still with the brand as chief of production. The shapes were based on traditional peasant clothing – fisherman’s loose trousers, the cuffed trousers of farmers. Her first boutique, which opened in Aoyama, Japan, in 1973, didn’t have any mirrors, since the consumer was supposed to consider how the clothing made them feel, not how it looked. It also had no window displays. Kawakubo added a menswear collection in 1978.

Comme de Garçons presented their first show in Paris in 1981. Think of celebrated designers of the end of the 70s and beginning of the 80s – people like Gianni Versace, Christian Lacroix and Emanuel Ungaro were making clothes that were bright, fun and exaggerated, with short, flippy skirts, fitted, low cut bodices, or in tight, body con style. Never did the words “loose”, “droopy”, “shapeless” or “holey” enter their design vocabulary, although admittedly “black”, as in “little black dress” was a staple.

“Hiroshima Chic” was certainly a label that they wouldn’t have revelled in either, and when critics gave Rei Kawakubo that appellation she too was offended. “Although I never went hungry I remember well the extreme poverty and devastation of those times. But this had no bearing on my work whatsoever. These critics had it all wrong. Being born in Japan was an accident. There is no direct correlation to my work. Growing up in postwar Japan has made me the person I am, but it is not why I do the work I do. It is a very personal thing – everything comes from inside” she angrily responded. The devotees of her work, dressed in slashed and shredded asymmetrical layers of black were dubbed “The Crows” by the Japanese fashion press. Her fanbase was loyal and unwavering, although the press continued to deride her work. One sweater in particular, for her 1983 collection was full of holes. For many it looked fit for the bin. “If only they knew how difficult was to get machines to drop stitches at irregular intervals.” the perfectionist Kawakubo sighed.

Having established her all black uniform, and gradually expanding to include white and navy blue, Kawakubo made headlines in SS 1996 by designing a riotously colourful collection with models in fluffy, clown-like wigs. It was the SS 1997 collection which really dropped jaws, however.

The Lumps and Bumps Collection

Lumps and bumps. Image via Another Magazine.

“I remember feeling rather uncomfortable about the ‘lumps and bumps’ collection,” says fashion journalist Suzy Menkes.  “At first look, it seemed like a disfigurement – as though these were cancerous cells protruding through the fabrics, which appeared, by contrast, as upbeat; even jolly. As so often with Rei Kawakubo’s collections, there was the shock of incomprehension followed by visual memories that last a lifetime.”

“I realised that the clothes could be the body and the body could be the clothes,” explained Rei Kawakubo “This was an idea for possible new clothes. I then started to design the body. I didn’t expect them to be easy garments to be worn everyday, but Comme des Garçons clothes should always be the new to the world and inspiring. It is more important, I think, to translate thought into action rather than to worry about if one’s clothes are worn in the end. This is probably why the collection stimulated strong feelings in many people.” Perfume is the bedrock of most design brand’s fortunes and Comme Des Garçons is no exception. But in line withRei Kawakubo’s design philosophy, these perfumes were no sweet, flowery delights. In 1994 the first fragrance came out, which had no name. The bottle was designed as a pebble shape, which was meant to lie on its side. “Works like a medicine, behaves like a drug” was the tagline for a scent that combined Labdanum, Styrax, Cedarwood, Cardamon, Cinnamon, Black Pepper, Honey, Rose, Cloves, Nutmeg, Incense, and Sandalwood.

In 2002 Commes Des Garçons entered an agreement with Spanish fashion empire Puig to distribute the fragrances which Kawakubo developed. 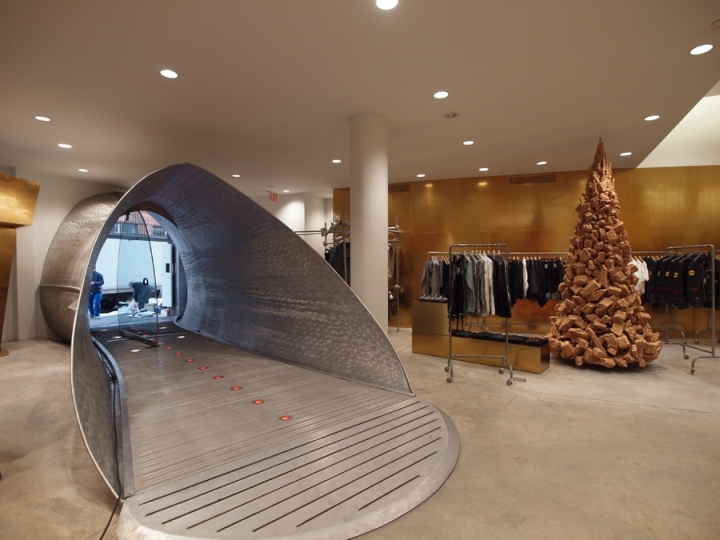 To date, Comme des Garçons has an annual turnover of $250 million with flagship stores in London, Tokyo and Paris plus 230 smaller shops and franchises, and a regular program of temporary pop ups too.

At the age of 76, Rei Kawakubo is still highly involved with her company, continuing to innovate with her company and personally design the collections herself. In 2017 there was a huge and highly acclaimed retrospective of her work at the Met Museum, New York.