The Fashion Space Gallery is celebrating its 10-year anniversary with an exhibition by Austrian born artist Rainer Ganahl. Comme des Marxists is a supposedly satirical attempt which “challenges our understanding of the fashion system”, in a “Playful, humorous yet thought provoking approach”.

Thank you, I needed some clumsily cut out hammers and sickles to make me readdress my plan to pop to Primark to buy some factory farmed clothing after the show. I’m disappointed because Fashion Space Gallery have put on some great, genuinely thought provoking shows in the past which have stayed with me. Then again, don’t you find that when the PR department smugly claims that something is going to make you think, it’s inevitable that your thoughts are more along the lines of “I wonder which bus route I should take home” than “Oh my goodness, I will never look at things the same way again!” 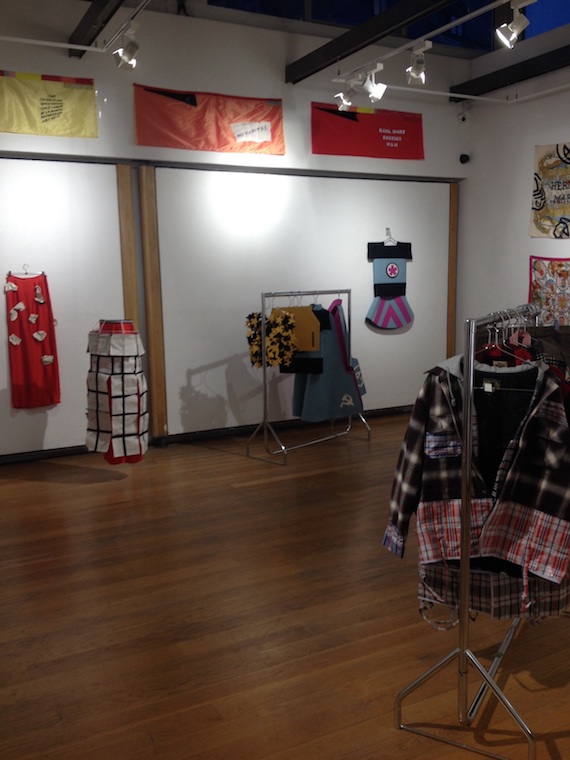 The presentation at the Fashion Space Gallery shows several of Ganahl’s collections. They are all hung unappealingly on metal garment rails or tacked to walls with no attempt at appropriate lighting or aesthetic appeal. Perhaps this is an attempt to mirror the harsh lighting of the factory floor or the basic rails of the cut-price clothes stores, but I think it’s just inept curation.

The collection which the show is named after versions of Varvara Stepanova’s famous Constructivist designs for outfits. Very faithful to the originals, these examples look like a gifted nine-year-old followed the pattern, cutting the surface decorations out of felt and gluing them, only slightly wonkily, to the background and asking an adult to sew the outlines into a passable dress shape. Nevertheless, the original designs are so striking that I would probably wear this version. To a fancy dress party. 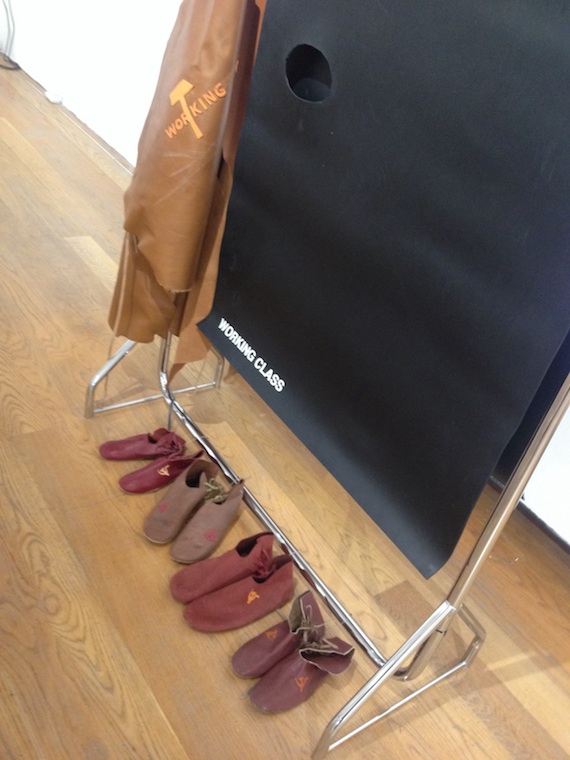 Obviously, I’m missing the point and I know that. Ganahl’s original concept here is that Comme des Garcons borrowed heavily from the design first in one of their own collections and he is merely pointing that up. The finish, presumably, is irrelevant. And yet this is a debate which has rumbled on for a long time.

When is a tribute a simple rip off? I would say that the principally intellectual Commes brand was very well aware of its sources, and wasn’t trying to pass off Stepanova’s work, which was itself a form of social protest, as some pretty geometric designs of its own.

That’s the point though, “Russian Constructivist clothing represented the destabilization of the oppressive, elite aesthetics of the past and, instead, reflected utilitarian functionality and production” as Wikipedia explains and its extremely likely that Rei Kawakubo, who is extremely involved in puncturing the elite aesthetics of the fashion world was celebrating, not plagiarising the Constructivist’s idea – ironically through her own elite brand.

Obviously, rendering the design in childish felt and putting it on a gallery wall isn’t taking it any closer to clothing that was designed for efficient mass production and people’s comfort and safety. Stepanova’s ideas were progressive, thoughtful and elegant, though unfortunately her highest ambitions for them were generally unrealised.

Rainer Ganahl’s action of recreating the pieces himself and naming them Comme des Marxists – “For the Marxists” – is rather vainglorious and actually insults Varvara Stepanova.What, you’re reclaiming the designs for the Marxists? By making a copy of a copy of a copy? So meta, so pointless. 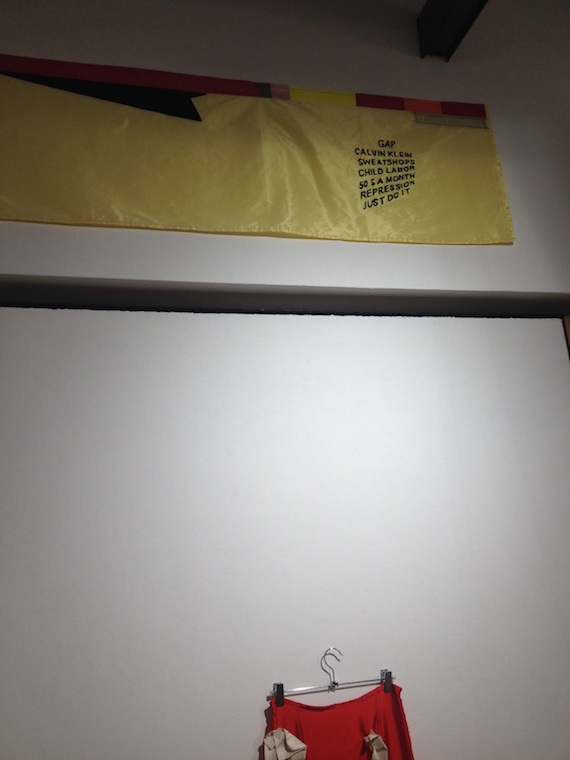 The next Russian artist that Ganahl decides to humbly bring to our attention is Kazimir Malevich. Malevich was a friend of Varvara Stepanova and was an early abstract artist, extremely influential on the history of modern art and well known. He had a retrospective at the Tate in 2014.

Ganahl says about this collection: “As Malevich’s Suprematist paintings chased the sublime and the transcendence of abstraction, Karl Marx used his category of the “superstructure” to capture everything that exceeded the economic spheres of production, referring more commonly to law, education, culture, religion and art.”

To represent these ideas, Ganahl has appliqued a small hammer and sickle and a large abstract shape to a white felt skirt.

It looks like Ganahl is playing Guardian Reader Bingo. Edward Snowden? Oh, the scandal. Make something about that. In fact, it’s very very bad, do it twice. Cover ups! The Opium Trade! Sex Work! The Middle Classes! Environmental Pollution! All awful things. I can’t see Brexit or Factory Farming or Plastic Drinking Straws, but I’m sure it’s all in there, and I’m sure we would not have known about these things if Ganahl hadn’t brought them to our attention, in his playful, patronising yet meaningless way.

Comme des Marxists is at the Fashion Space Gallery until 12th January 2019.