In his latest collection, Laboratory 12, produced as part of a design residency for Fashion Space Gallery at the London College of Fashion  Benjamin John Hall is interested in the intersection of fashion art via governmental intervention into citizen’s lives through a lens of technology and… feet.

Benjamin John Hall describes himself as a shoe designer slash inventor. I would also add “slash artist” to that. He has created a number of collections of shoes – the Birth, Life, Death and Resurrection collection, the Design by Destruction collection, and now the Laboratory 12,  collection which uses the starting point of exquisitely beautiful and eminently wearable footwear to explore a concept, a process which often involve a performative aspect which is filmed for posterity, putting him on a level with conceptual, performance and film-based artists.

Footwear is an unusual basis for all of this, but Hall is clearly an immensely skilled cordwainer, producing immaculately finished monochrome designs in Laboratory 12, featuring pristine whites and gleaming blacks in modern shapes with fine materials.

And really, why not? Fashion design has always been about technical innovation, probably since its inception but certainly within my knowledge since the 1920s when artificial silks were invented and shiny plastic sequins developed.

Since then technology in clothing has been about fabrics for sports or extreme weather that increase breathability or control temperature, silver in socks to make them more antibacterial, or if “tech” to you means an iPhone, there’s always things like apps in trainers that tell you how far you ran, or Henry Holland’s rather clumsy attempt last year in his SS16 collection to make a “shoppable catwalk” by supplying celebs with rings which contained chips pre-loaded with money, which they then tapped onto brooches worn by the catwalk models to purchase the desired outfit, a bit like beeping into a bus with your Oyster-card or tapping your contactless debit card to buy a coffee.

On the more arty side a designer with comparable curiosity and sense of playfulness about the possibilities of fashion as art beyond merely clothing the body would be Hussein Chalayan, who created collections which could be converted into furniture, or changed mechanically via remote control.

Other comparisons are the recent graduate collections featuring convertible clothing for refugees, such as jackets that change into tents, or, even more prosaically, traveller’s multi functional clothing, such as trousers that zip off into shorts. And of course, there has always been the possibility of buying wearable spyware such as tiny video cameras set into eye glasses or watches.

Benjamin John Hall’s Laboratory 12 is a combination of those smart running shoes and the eyeglasses with spyware plus a dose of what I hope is humour. A lot of thought and expertise has gone into producing the seven pairs of shoes, which would be a wonderful premise for an Austin Powers type spy movie.

The concept was inspired by the 2006 death of Russian spy, former FSB agent Alexander Litvinenko. He died after eating sushi at a central London branch of Itsu – not from bad fish, but from polonium, a colourless, flavourless poison that had evidently been added to his meal, un-noticed by the agent. Laboratory 12 is the name of the KGB-run lab responsible for developing the toxin. That these things happen in real life and right now in Britain, not in some film fantasy of the Cold War in far off countries, struck Hall and got him thinking.

According to the designer, the Laboratory 12 designs explore “the extent to which governments potentially could – or already are – securing their best interests in a current global political and economic environment marked by uncertainty”. Although the statement is serious, his manifestation of these concerns is cartoonish – the spaces in heels and soles used to hide things are roomy enough to hide an entire miniature secret lab, as far as I can see, with the use of massive platforms and huge heels, and the doors to the “secret” compartment are handily engineered in neon pink. Sometimes this space is needed as a physical hiding place, for swab kits to collect DNA for example; sometimes it is a housing for  recording device, and sometimes it is needed to house technology, such as geiger counters.

The whole exhibition has the feeling of a late night discussion with mates turned real, although Hall says he spent six months in researching the concepts and delving into the histories and contemporary realities of spying, as well as approaching collaborators. The next months were spent on production, which was approached as rigorously as if multiple copies of these shoes were being made, instead of the one of each design that exist. Finally came film making of certain of the shoes in action as well as short documentaries about the concept of some of them, and then the final hang.

The Laboratory 12 project took eighteen months in all to complete, overstepping the proposed year long residency that the Fashion Space Gallery initially suggested. Benjamin John Hall’s expertise is in shoe design and making: for the technical side of things he turned to Nanda Khaorapapong, a researcher in wearable computing and tangible design; Richard Beckett, a material scientist and architect; and Martyn Carter, a specialist in CAD and 3D-printing. All have done an excellent job. 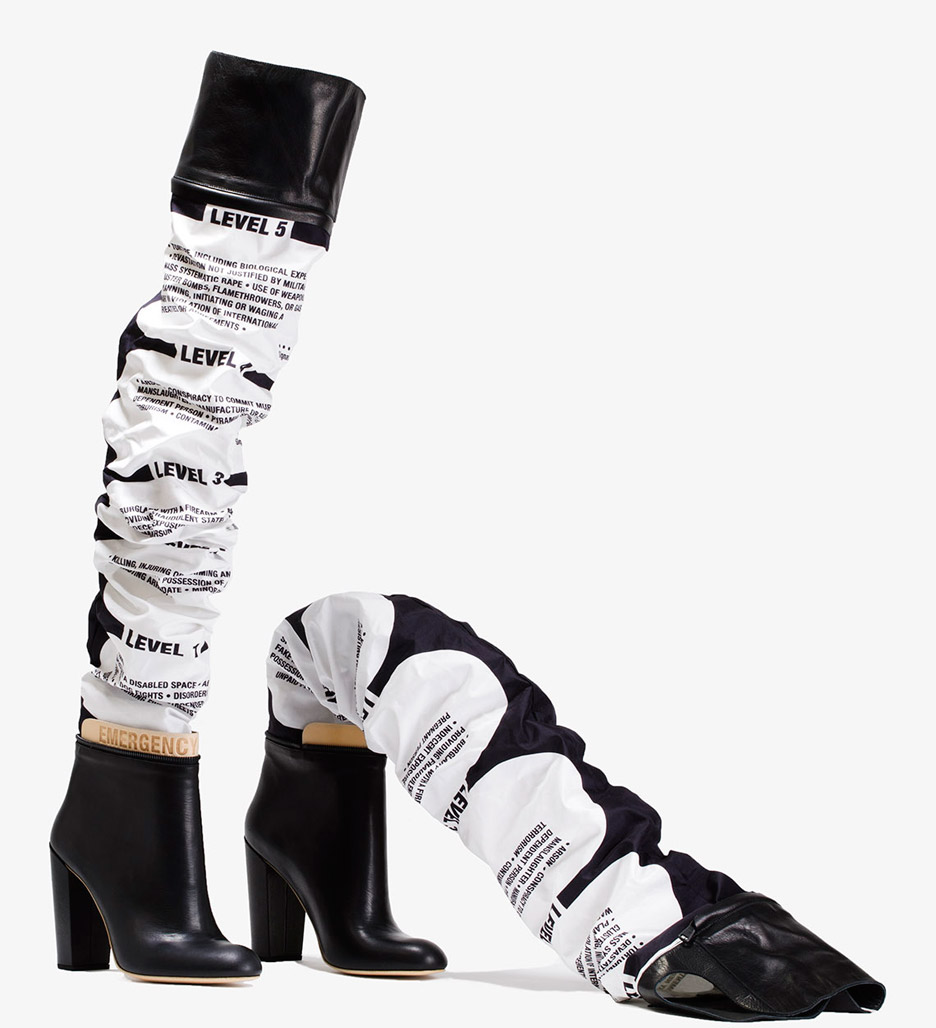 On display there is a knee length boot called the Chapman – named after Anna Chapman, the Russian spy famed for her sense of style, the heel hides a mini sound recorder with patterned holes in the leather to allow it to work. This is one of the more prosaic interpretations, although a lovely boot.

An even taller boot, the Krysha, starts out at mid-calf and unzips further and further, each time making the boot higher, to reveal a silk lining printed with messages. “Krysha” is underworld Russian slang for “Roof” or “Protection”, and the boot outlines the level of protection they might need, with misdemeanours ranging from Level 1 – Parking in a Disabled Space, to Level 5 – Torture/Systemic Rape/Violating international treaties. This piece really feels distasteful to me though, because glamorising systemic rape with a nice over the knee boot of silk and equine leather? Not witty at all.

Then there is a Japanese geta style sandal, the Geiger. complete with stylish leather sock, which hides in its towering platform the mechanics needed to detect radiation. The sandal vibrates when a threat is present, and at the same time a matching makeup compact, complete with eyeshadow of course, will display the radiation levels in an LED display which toggles to innocently show the time instead if secrecy is threatened. No word on why a spy might want to secretly check radiation levels whilst wearing wildly impractical and highly noticeable (though stylish) geta, but I’m sure we could weave a story around that if we wanted to. 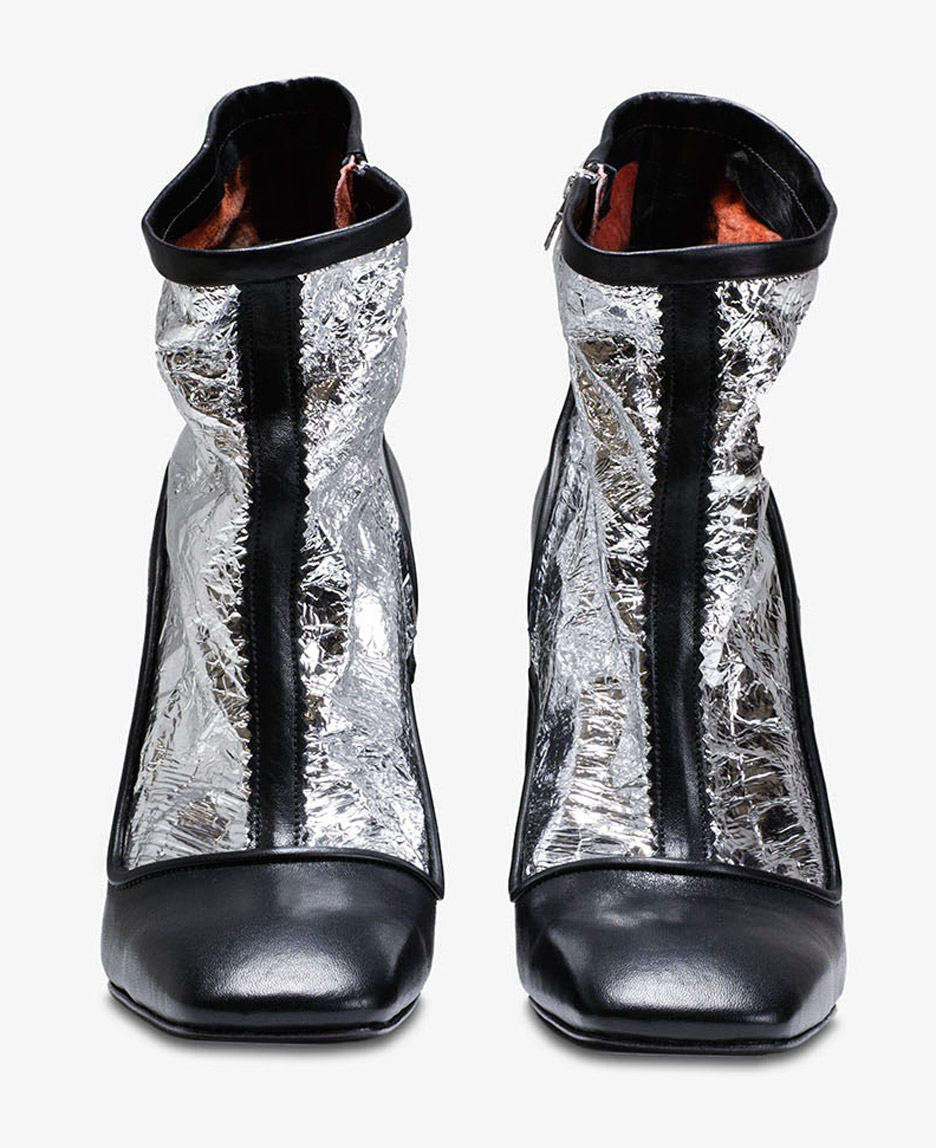 After that we come to my personal object of lust, the shiny silver and black Lastochy. A beautiful boot with a neon pink door exposing a secret compartment in the heel, it is designed for the “swallows” (professional seductresses) who entrap persons of interest and then collect their DNA in order to implicate them in… well, whatever they want to implicate them in.

Brespredel is an elegant but unassuming man’s shoe, the least tricksy in the in Laboratory 12 collection. Attached to the back is a nylon 3D printed scorpion’s tail. It is intended to represent how an apparently ordinary person can have a sting in their tail – how a government official might do whatever they want with impunity.

Zersetzung is German for “corrosion” and is a chunky sandal with a perfume emanator in its base. A text message causes an unpleasant smell, instead of an uplifting fragrance, to be released. The idea behind this is the surprisingly subtle technique of the Stasi, the East German secret police, in engineering various disappointments in a target’s life until they become broken down. Sounds a lot like my life, really. Maybe the Stasi are on to me.

Your feet are on fire!

Kompromat is a black and white shoe boot with a chunky blue woven heel decoration. It is the show-piece of the exhibition, and probably great in a live performance. The blue fibre of the heel turns out to be a fuse, and by standing near the wearer, popping the top of a specially doctored coke can and then crushing it, you can ignite the fuse and set their feet on fire. The text explains that the footwear isn’t intended to hurt the wearer or anyone nearby, just to make them look suspicious. It is quite suspicious when your shoes spontaneously combust. The effect is demonstrated in a beautifully-shot film.

The in Laboratory 12 exhibition, which is free to enter and open to all is carefully laid out with each concept meticulously explained, alongside videos of how some of the shoes were produced and charming x-rays showing how the technology resides within each pair of footwear. Benjamin John Hall isn’t currently producing commercial collections, which is a shame, because the designs are so lovely that with or without a geiger counter if he was I would buy them all.

Laboratory 12 was at Fashion Space Gallery at London College of Fashion University of Arts London until July 15th 2016.

Dior and I – Review