Manolo Blahnik at the Wallace Collection

The Manolo Blahnik at the Wallace Collection is a sumptuous dream for fashion lovers. Just off Oxford Street, it is housed in the 18thcentury Hertford House and so visiting it is like a combination of a trip to a stately home and the National Gallery.

Breathlessly crammed with paintings in gold frames as well as ornate gilded Rococo furniture and various clocks, ornaments and objects, touring its rooms decorated with silk panelled walls and malachite pillars leave you longing for a sit down at the very pleasant café. And that’s before you spot the displays of Manolo Blahnik shoes. Manolo Blahnik at the Wallace Collection is a stunning exhibition. 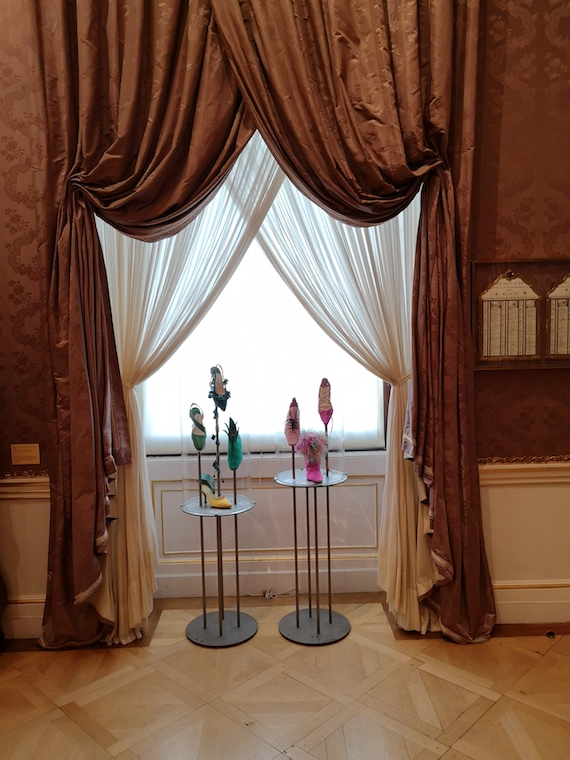 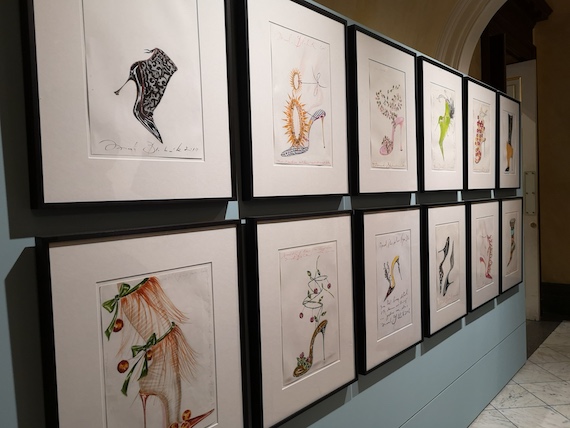 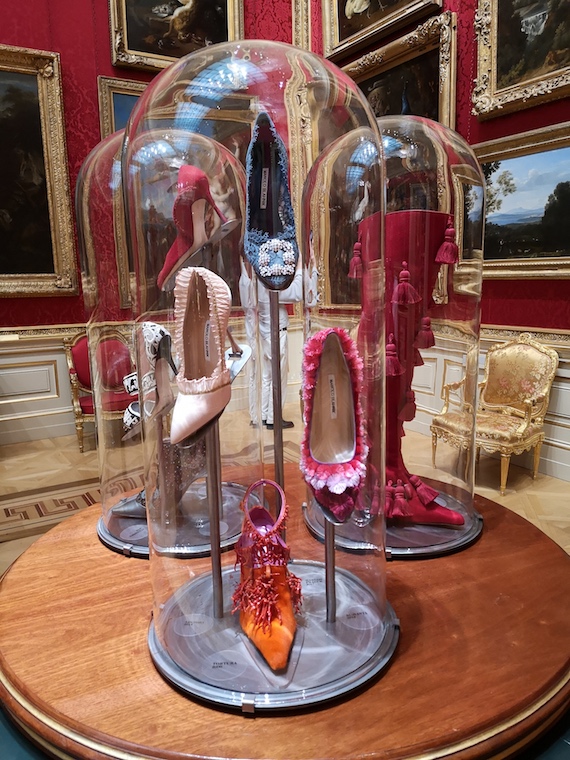 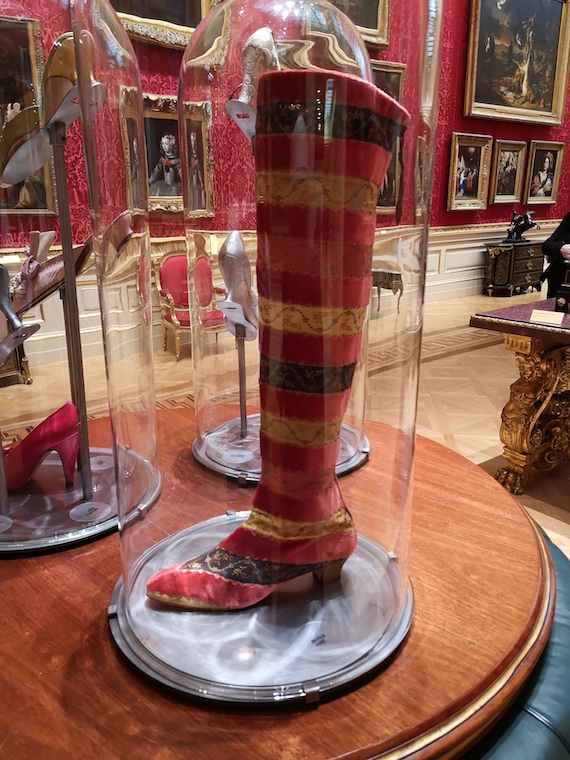 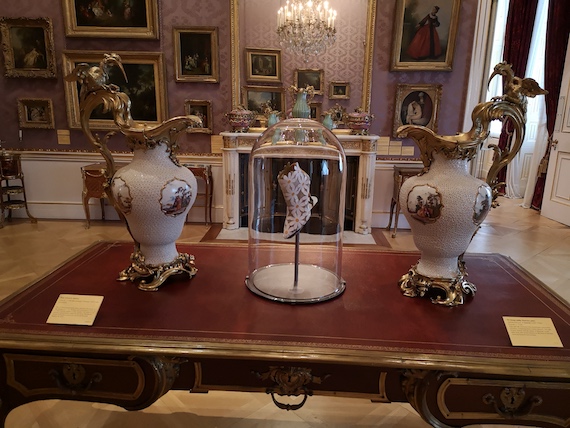 Manolo Blahnik at the Wallace Collection

Whilst most visitors know about the Tate, the V&A and the National Gallery and Portrait Gallery, I feel like the Wallace Collection is overlooked. Which is both a good thing and a surprise, because it contains some of the most famous paintings you’ve ever heard of.

Frans Hal’s Laughing Cavalier is here, there are some beautiful Rosa Bonheur portraits of radiant sheep, and roomfuls of frothy, marshmallowy Fragonard and Boucher paintings of beautiful women, their wonderful dresses and their little dogs.  Amongst these is the favourite saucy postcard “Woman on a Swing”, by Fragonard, who throws her slipper high in the air whilst swinging with gay abandon. The slipper, however, is not what her lover, situated in the bushes in her feet and pop-eyed with joy, is looking at.

This painting inspired Manolo Blahnik to make a pink slipper of his own, displayed here. There are also more pastel bon-bons of silk 18thcentury inspired shoes, many of which were made for the Sophia Coppola film Marie Antoinette. They are adorable.

“To start with, I felt a little embarrassed to be around these types of beautiful things and then I thought: ‘Why not [do something] that brings a connection between a piece of silk and a piece of art?’ I think it is important to see where something came from.” says Manolo, who says he has been coming to the Wallace Collection for many years and is very inspired by it. Beneath the portrait of the Laughing Cavalier is a sturdy knee boot.

Other connections aren’t as direct, but you can see that shoes in the many full-length portraits must have been fun to study for any shoe designer. As well as this the wealth of detail in the unusual and finely made porcelain ornaments, the clocks and furniture might well have sparked ideas, not to mention the room full of armoury including a full-sized horse armour fitted to a statue of a horse surmounted by a mannequin also in full armour. These are real-life pieces and one wonders at just how strong a horse would have to be to be able to bear all this. It also makes you wonder if it was the same person collecting paintings of blowsy cherubs and war accoutrements, although there are also plenty of depictions of hunting, the rape of Lucretia and other such wonders.

Anyway. To get to the Fragonard display, you’re going to be passing hundreds of other Blahniks. Anxiously roaming the lower floors, we spot only one or two, arranged in glass bell jars. But not to worry, they are all upstairs. The exhibition boasts 160 all told. Apparently, Blahnik wanted to show them all of a heap in fireplaces and on tables. I rather like that idea, as if an impetuous princess had cast them off. But this way you can probably see them better. Also, I overheard the curator saying that they had intended to make the base of the display domes gilded. I didn’t catch exactly why they didn’t in the end, as it would certainly have fitted in better with the golden accents everywhere else. Instead, they are a rather austere steel grey. Never mind.

The shoes are from Blahnik’s personal archive and not all of them, of course, are inspired by the Wallace Collection. Spanning 50 years, his inspiration comes from many sources. There are green bootees like the joker on a playing card, missing only the little golden bells, as well as black and white chequered stilettoes and harlequin checked shoe-boots. A pink evening shoe has pom-pommed laces like the decorations on a clown’s hat, and a yellow satin mule also sports a black pom-pom fringe. This was inspired by the Commedia del’Arte. His “interpretation of Englishness” is a bit of a let down: apparently, he’s been looking at old man’s slippers. Other boots have tongues like a delicate curl of butter and a selection set among the cabinets of miniatures are bejewelled and beautiful.

The detail and craftsmanship on the shoes is enchanting. One black suede boot is all hand embroidered with intricate ribbon embroidery. Another silver brocade mule is set with precisely placed rosebuds in a honeycomb formation. Some are decorated with real seashells or pieces of coral. The shape is distinctive. Although it has doubtless varied a little over the years, a favourite is a very pointed toe with a spindly kitten heel. They closely resemble Blahnik’s design sketches, in which the foot is invariably depicted torturously arched. A wall of these sketches greets you upon entering the building.

Interestingly, Manolo Blahnik says that his key customers are women in their 70s. He jokes that perhaps the exhibition will bring their granddaughters into his shops. But I doubt it. The setting allows you to view the shoes as beautiful artworks, but not many people will be swapping their designer trainers for an enfrilled slip of satin any time soon.

An Enquiring Mind: Manolo Blahnik at the Wallace Collection is on until Sept 1st and is free to enter.