Mikio Sakabe is an incredibly popular fashion label based in Japan. The shows are regularly described as quirky, avant-garde, and ground breaking. The designs include oversized silhouettes, unexpected materials, and innovative presentations.

The designers, spouses Mikio Sakabe and Shueh Jen Fang, started the label in 2006 and have shown at Tokyo Fashion Week every season since. As well as this, over the years they have each had their own labels, collaborations and side projects. Mikio Sakabe is popular with pop stars, Harajuku girls and high fashion collectors. Recently the brand has been experimenting with 3D printing. 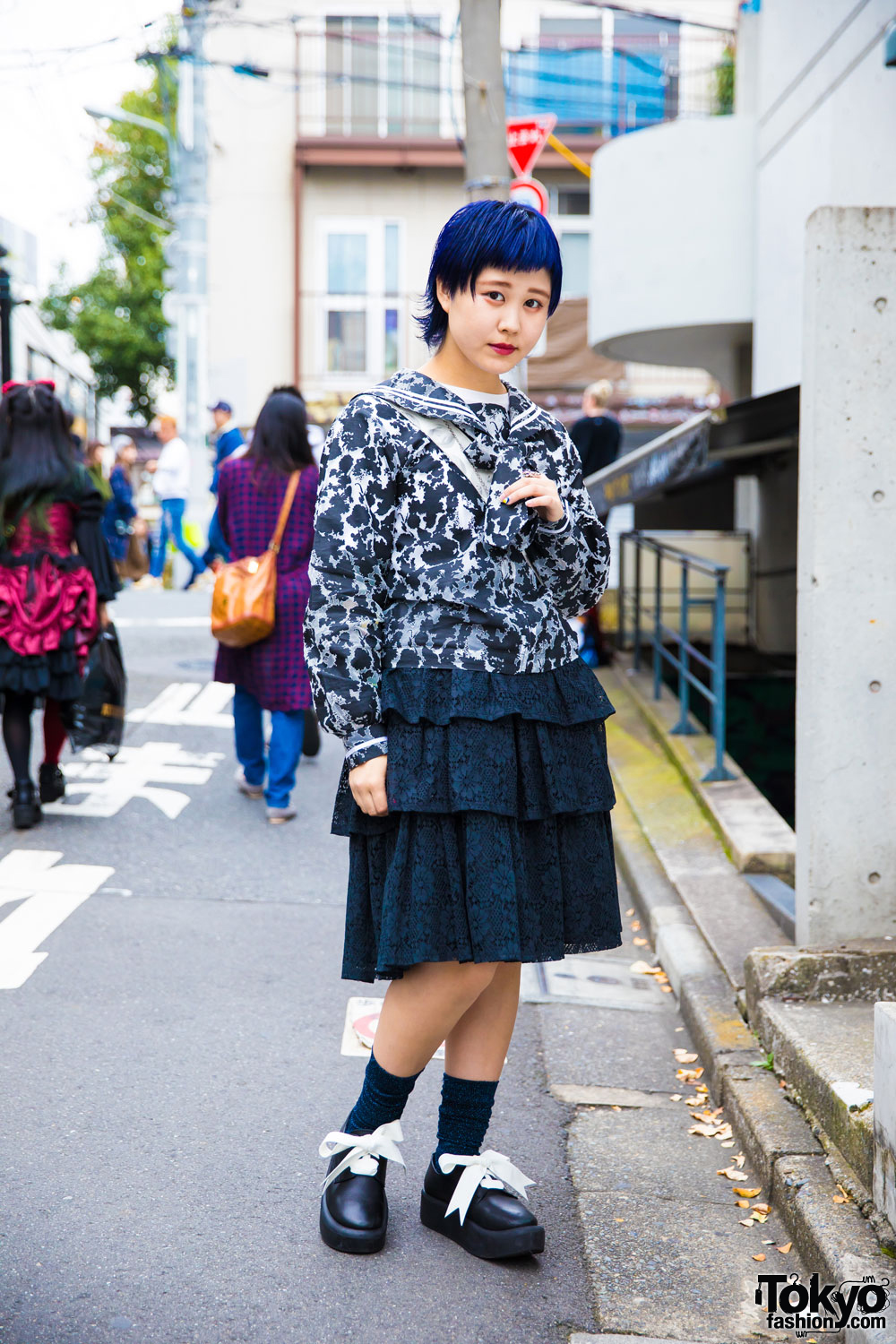 Harajuku girl in a top by Mikio Sakabe. Image via Tokyo fashion 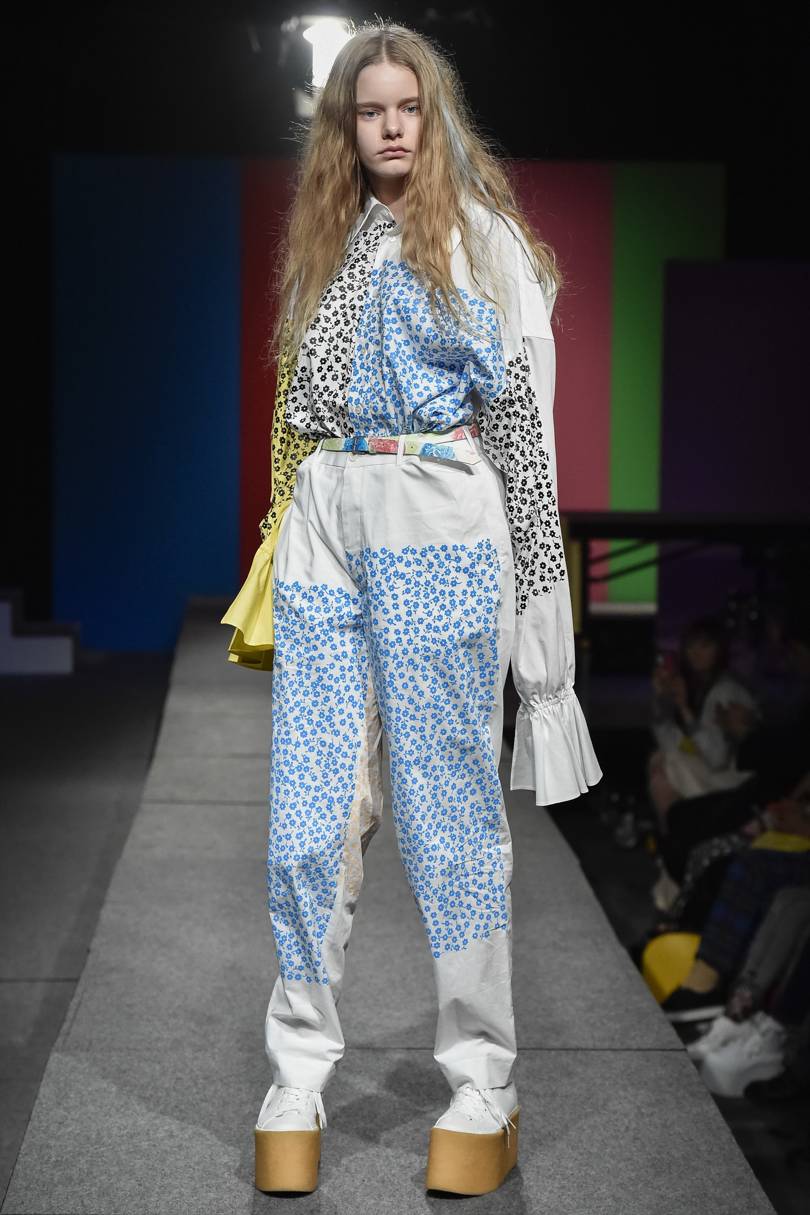 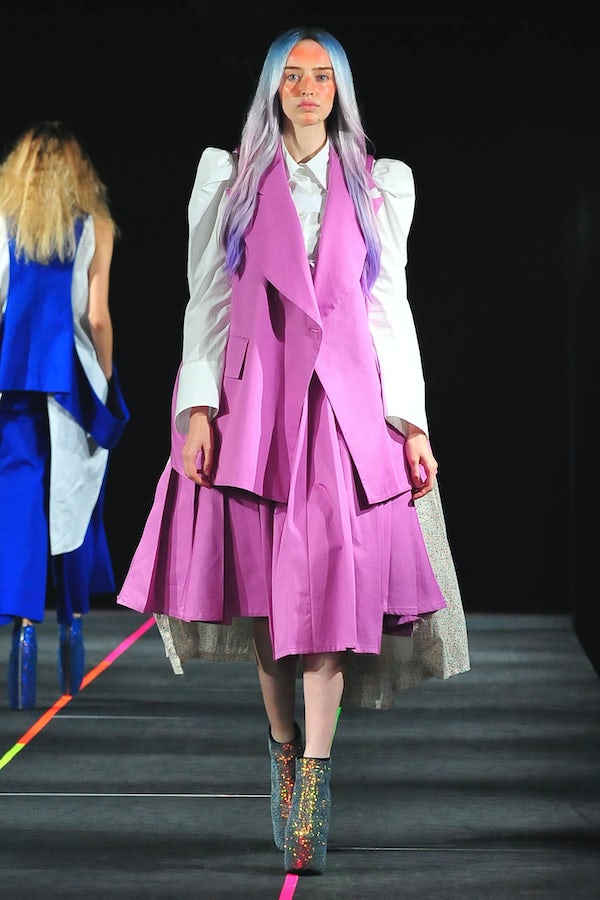 Mikio Sakabe was born in 1977 in Japan. In 2000 he moved to Paris from London to study at the International Fashion School there (Ecole de Mode Internationale, or ESMOD). He graduated in 2002. From there he went to Antwerp to further broaden his ideas and studied at the Hogeschool, which he finished in 2006. That year, he won the Fashion Special Prize at ITS5 in Trieste, Italy. He has described his time in Antwerp as “The best moment in my life. And I lived in London, Paris, Tokyo, Antwerp, and Antwerp is the best!”

In 2006, Mikio Sakabe and Shueh Jen Fang were married, moved to Tokyo, Japan together, and launched the Mikio Sakabe label.

Shueh Jen Fang was born in Taiwan. She had an interest in fashion at an early age and learned sewing, patternmaking and fashion technique in high school. She also studied at ESMOD from 2000-2002 and then the Cambre Bruxelles. In 2010, after co-launching the Mikio Sakabe label, she launched her own, Jenny Fax. These days she works on both concurrently. The name she is often known by is JenFang.

The pair met at ESMOD where they were classmates. Mikio had only decided to go to ESMOD at the last minute, since he was living in London and considering St Martin’s. It proved too expensive for him, so having read about the prestigious fashion college in a magazine he decided to apply. Having passed the interview process he only had two weeks until the start of term and had to rush to arrange his visa and somewhere to live. Unfortunately, he didn’t speak French. Jenfang came to his rescue, translating and explaining things.

In the creative partnership, Sakabe comes up with the concept for each season’s collection. He conceptualises by simply walking around Tokyo and being inspired by what people in the highly fashion conscious city are wearing on the streets, which he describes as ever changing. He also says that he doesn’t do any research for his designs. His pose is disaffected: when asked what his favourite word or phrase is he replies “Maa ne,” or “well, whatever.” I don’t like to make decisions.”

It seems that’s down to JenFang. With her huge technical skill, she is in charge of designing the silhouettes and working on the specifics of the collection. This has evolved from the earliest designs, which were very influenced by the sugary cute and girly aesthetic of Lolita style, through to a phase based on 80s power dressing, with overstated ruffles and shoulder pads, and onto a recent collection which was totally different but still very street style: black band t shirts dominated along with 90s fashion. Sakabe was fascinated by the potential of band tshirts and prints because of their very ubiquity: “Prints are very interesting things, everyone use prints for t-shirts and every single garment, so in the way one of the most difficult things to make it original and nice.”

Mikio Sakabe himself has also collaborated on the Saison 00 project, working with print designers including fantasista utamaro todesign “uniforms” a J- Pop girl band called Denpagumi Inc. The customised sailor-style outfits for the seven strong troupe has made him a household name and, he readily admits, might be what he is most famous for. The group has licensed copies of the outfits and they are incredibly popular.

This collaboration went right back to Sakabe’s reflection of Japanese culture’s interest in manga comics and anime animations, including the relatively common teen hobby of dressing up as characters from a favourite series or recreating the general look of a typical character, with the impossibly huge eyes, long legs and masses of hair.

The band costumes for Denpagumi Inc were styled to include huge anime-style wigs in pastel colours, school-girl sailor uniforms and even metallic tubes which were like a magical leg extension, which most members of the band found impossible to walk in unaided, needing a literal hand hold to go down the catwalk. (On his main catwalk Sakabe has also shown outfits with platform shoes which the models found similarly difficult to walk in).

Though the Mikio Sakabe brand shows at Japan Fashion Week it is considered far cooler to show away from the main schedule. The Saizen 00 project was shown at a department store in the very fashionable Roppongi district. Many art exhibitions, fashion shows and music events are held at department stores in Japan and they don’t have quite the taint of middle aged, middle class staidness that we have here. Rather, they are very exciting environments.

Giddy Up outfit. Image via Vogue.

Mikio Sakabe and JenFang’s latest side experiment is in 3D printing. Called “Giddy-Up”, Sakabe’s vision is to “create a new human, who is living in the future—the balance of technology and reality.” It features futuristic-looking garments, but the main focus is on a small collection of trainers. They comprise a knitted sock with all kinds of different soles featuring coils, springs and bumpers. “Giddy Up means Let’s go!” says Sakabe.

A member of Denpagumi Inc is assisted down the catwalk. Image via Tokyo Telephone.