Issey Miyake (b 22.04.1938 as Miyake Kazumaru) is a Japanese designer, perhaps most famous for his “Pleats Please” line of clothing, or, as is often the case, actually his perfume “L’Eau D’Issey” which is immensely popular. Leaving that aside for the moment and focussing on his clothing design, Miyake’s signature is work that is light, airy and easy to wear, with a technological twist.

He is also really keen on developing and promoting talent in others, with the “experimental fashion laboratory” Miyake Design Studio. 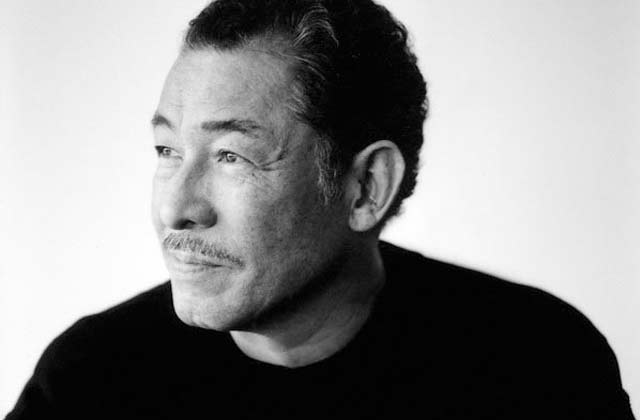 Issey Miyake was born in Hiroshima, Japan, and was seven when the bomb hit. Although personally unaffected by the tragedy, it did touch his life in a different way. In 1952 two commememorative bridges were built in the city. They were named, respectively, “To Live” and “To Die”. Later, they were re-named the slightly more positive “To Create” and “To Go”. A teenaged Miyake walked over both of these bridges every day. It gave him his first encounter with design’s ability to inspire powerful emotion: for Miyake and many others the bridges represented hope.

He went on to study graphic design at Tama Art University in Tokyo, graduating in 1965. He was accepted for further training in Paris, and went to the Chambre Syndicale de la Haute Couture, from there taking apprenticeships with Givenchy and Guy Laroche. Whilst he was there, he witnessed the 1968 student riots in Paris, which made him determined to make clothing for everyone. He travelled to New York to work with Geoffrey Beane, which actually made him see the potential of the Japanese future in a much clearer way – a wave of Japanese futurism was sweeping the city inspired by the Osaka Expo ’70. On returning to Japan, he opened his own business, the Miyake Design Studio, which was founded in 1970.

The first Issey Miyake ready-to-wear collection was shown in New York in 1971 followed by a Paris show in 1972. Miyake’s first shop was opened in Tokyo in the Puzzle Aoyama Building in Gaienmae in 1974, and in 1975 an Issey Miyake store was launched in the Place du Marche Saint-Honore, Paris. In 1976 a second Tokyo store was opened, and Issey Miyake MEN was also launched. The brand never faltered and from there many other stores were opened around the world, and subsidiary brands created. The first fragrance, L’Eau D’Issey, was launched in 1992 and has remained popular.

From the very beginning, he was interested in experimentation and technology in clothing. In 1970 he was invited to participate in the Toray Knit Exhibition, and he presented a collection of clothing made up of parts that could be assembled and disassembled.

A Fusion of East and West The designer experimented with a fusion of East and West design that became extremely popular, because it combined elements of both in a striking, but not intimidating way. There is a traditional Japanese concept of Ma (間) – negative space. In terms of Miyake’s design, this means that it is not the body that it is important, and it is not the clothes either. It is the space in between them. His One Piece of Cloth concept explored the relationship between clothes and their wearer..

Issey Miyake’s design interest was not just between East and West, but old and new. During the 70s, he worked with a number of collaborators to both created completely new fabrics and meld traditional handicrafts with new technology. Old traditions such as sachiko embroidery and ikat weaving were dying out, and it was partly his interest in the heritage crafts which revived them. He toured historic production centres and not only learned from the traditional ways of making clothes but collaborated with the practitioners to make new pieces. In 1981 the Plantation brand was introduced, featuring modern designs which lived with the essence of natural and traditional clothing. In the 1980s, Miyake began experimenting with plastic, paper and wire. These creations were called “Body Works” and were featured on the cover of “Artforum Magazine” in February 1982. It was the first time clothing had been featured on the cover of an art magazine. Other cover appearances included Time Magazine of January 27th, 1986, along with an article “Changing Clothes: Issey Miyake,”. he was chosen alongside Mahatma Gandhi, Mao Zedong, the Dalai Lama, and Emperor Hirohito for a special 1999 Time feature on the “Most Influential Asians of the 20th Century” (August 23-30 issue);

In 1986 Irving Penn was commissioned to photograph the brand’s advertising campaign, styled by Midori Kitamura (current president of Miyake Design Studio), and retained for the next 13 years. This resulted in a very distinctive look for the brand, and the resulting photographs were later published in a seven volume, 250 image photographic history. 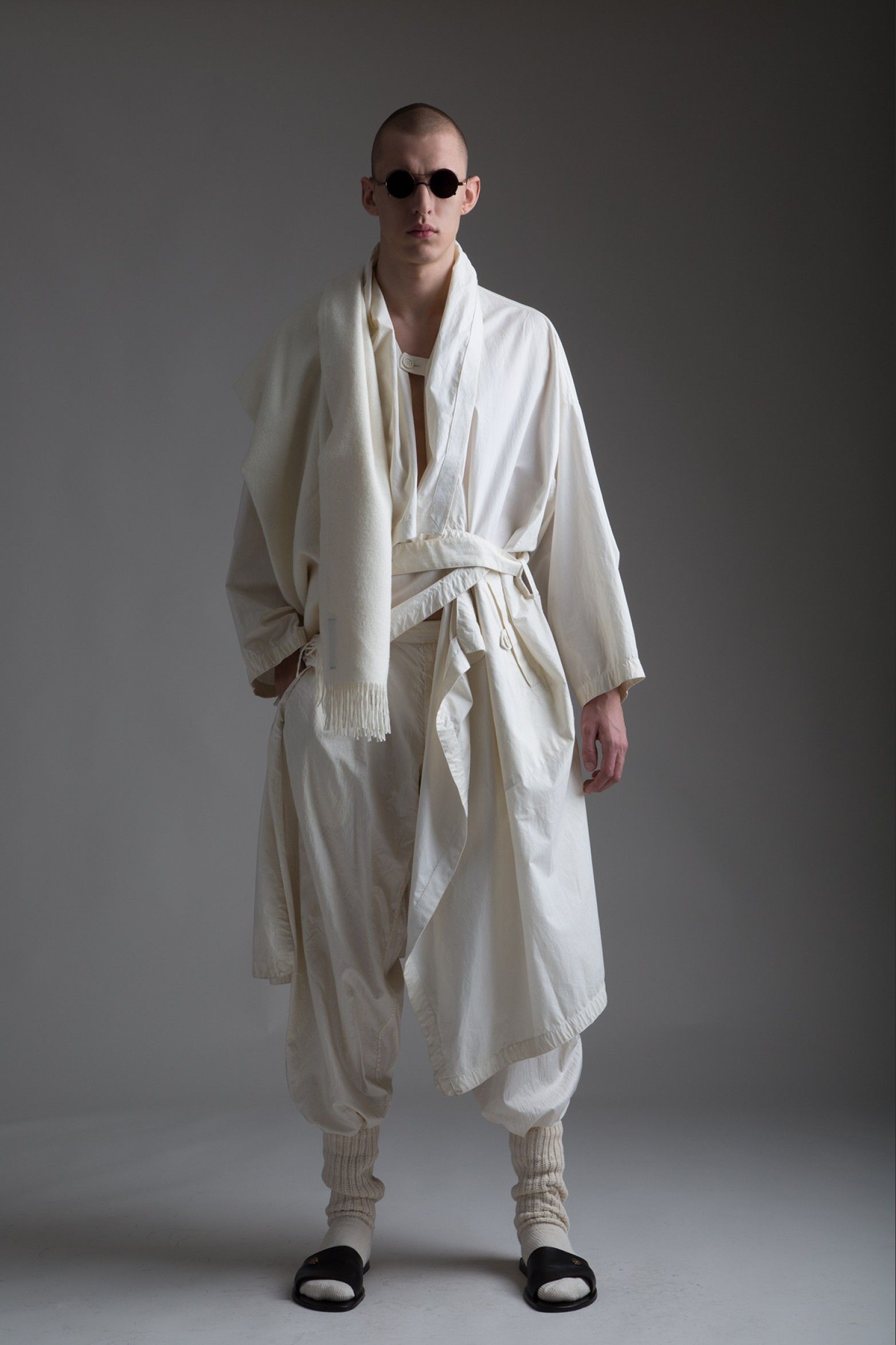 Issey Miyake Permanente was a line which was launched in 1986 gathering together the most classic of his pieces and intending to be a permanently available collection of high quality, long lasting clothes which would not change with the vagaries of fashion.

In 1988, Issey Miyake A-Un was shown at the Musée des Arts Décoratifs in Paris. He has also been featured in many other exhibitions such as “Future Beauty: 30 Years of Japanese Fashion” at the Barbican gallery in London, and the “Issey Miyake Making Things” exhibition of 1998 travelled to New York and Tokyo. XXIst – Century Man, an exhibition directed by Miyake at 21_21 DESIGN SIGHT in 2008. “The Work of Miyake Issey” exhibition was held at the National Art Center, Tokyo, in 2016. New York’s Museum of Modern Art added an APOC piece to its permanent collection in 2006.

Clothes from the Pleats Please range. Image via Heroine.

Despite this intimidatingly philosophically sounding basis, the design concept is very playful. “Pleats Please” is a range of clothing made from permanently pressed corrugated very light polyester jersey fabric, launched in 1993. It was first designed for Frankfurt Ballet when its director, William Forsythe came to Miyake asking him to create clothing for his new production The Loss of Small Detail (first performed in 1991). The garments are made in huge versions, before being squeezed between sheets of washi paper and fed into a heat press where the resultant permanent creases shrink the pieces down to size.

Advertising campaigns show smiling models dancing and jumping in clothing that bounces and swirls around the body. More recently the fabric is folded into the shapes of elephants, pandas, and swirls of ice cream or wine.

A Piece of Cloth 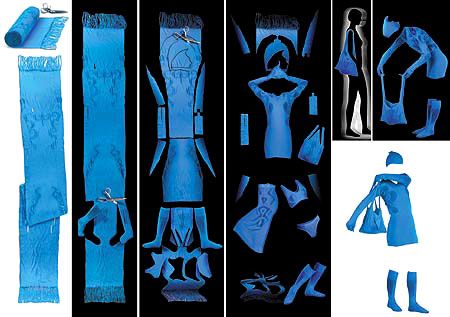 APOC was launched in 1998 alongside Dai Fujiwara, the fabric technologist. As a collaborative creation, APOC doesn’t bear the Issey Miyake name. The letters stand for “A Piece of Cloth” and “Another Possibility of Creation”. It consists of a tube of cloth which has pre-designed clothing forms within it. The wearer can choose how to cut out and wear the garment, so there is a choice of different individual clothes within the one piece.

Naoki Takizawa became the designer of the main Issey Miyake women’s and men’s ready to wear collections in 1997, although the designer himself did not retire but continued to launch new projects. Dai Fujiwara became the head designer in 2007, and Yoshiyuki Miyamae succeeded him in 2011. In 2000 Miyake himself launched Haat, a ready to wear women’s collection, followed by Cauliflower, a one-size-fits-all T-shirt in 2001, Issey Miyake Fête, a colorful and asymmetrical women’s line in 2004, and in 2010 Bao Boa accessories, which centre on a fabric made with metallic plates which can be easily folded. In 2010 he also launched 1325 Issey Miyake, an eco-fashion collection made from recycled materials.

In 2004, Miyake established The Miyake Issey Foundation. The Foundation holds the archives of the designer’s work. It also has a design and fashion training program to help to create the young professionals of the future. In 2007, the Foundation opened an exhibition centre in Tokyo. The 21_21 DESIGN SIGHT hosts vary exhibitions on the theme of Japanese deign. Miyake was appointed as its director, along with Taku Satoh, Naoto Fukasawa, and Noriko Kawakami.

In 2005 the Japan Arts Association awarded Miyake a Praemium Imperiale for outstanding achievement in the arts. In 2006 he became the first fashion designer to receive the Kyoto Prize in Arts and Philosophy for lifetime achievement, awarded by the Inamori Foundation in Japan; the prize included a diploma, a 20-karat-gold prize medal, and 50 million yen (about half a million pounds).

The current company statement avers: “ISSEY MIYAKE INC.’s basic philosophy is the continuing focus on both the importance of imagination and the development of new technology in which to make clothing […] Inheriting his spirit of innovative product creation with the goal of enhancing people’s daily lives, Miyake staff constantly search for ways to incorporate the joy of life into the company’s creations […] ISSEY MIYAKE INC. values free thinking that is unconventional – thinking that takes into consideration the spirit of creation, curiosity and love as a universal expression.” Of course, it might just be advertising speak, but having worn Pleats Please I can attest to the joy of Issey Miyake.

Today, at the age of almost 80, Miyake is still working on new ideas. His newest baby is the “Reality Lab”, with a team of young staff members from his studio. His zest for functionality, joy and new realities has never faltered.