Junya Watanabe was born in Japan in 1961. He is famous for his avant-garde style of work, and interest in technological, man made fibres. He has partnered with many companies including Converse, North Face, Carhartt, Nike and Levi’s. He is unusual in that he doesn’t take a bow at his own catwalk shows, and he rarely gives interviews or explains his work.

The designer’s mother owned a small made to order clothing boutique, which he has credited with inspiring his interest in fashion. He studied at the prestigious Bunka Fashion College in Tokyo and joined Rei Kawakubo’s company, Comme des Garçons, as a pattern cutter when he graduated in 1984.

In 1992 he started his own label under the Comme umbrella: it was called ‘Junya Watanabe Comme Des Garçons’. He showed at the concourse of Tokyo’s main station that year and in Paris the next. His company is still owned by Comme Des Garçons and he and his team of 30 work out of their Tokyo building. 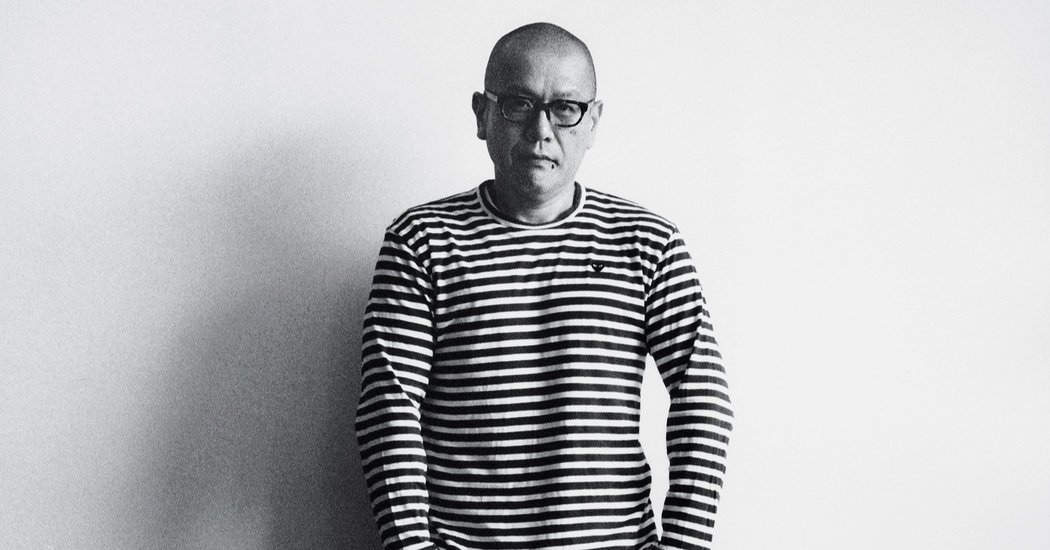 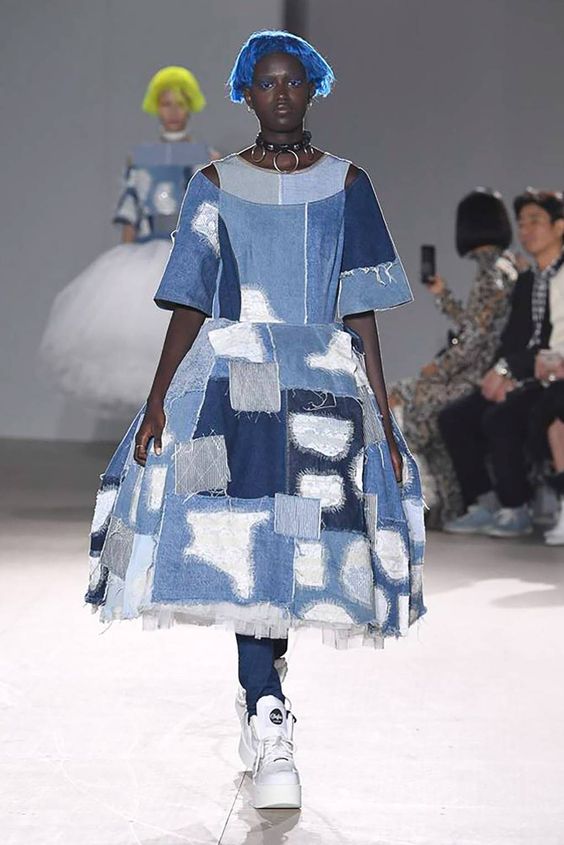 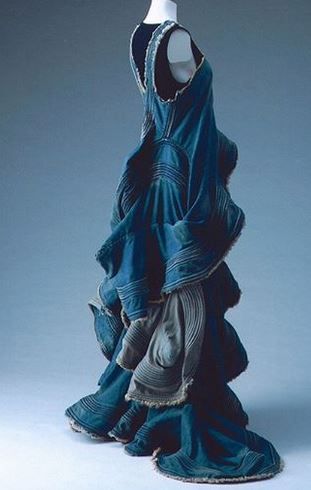 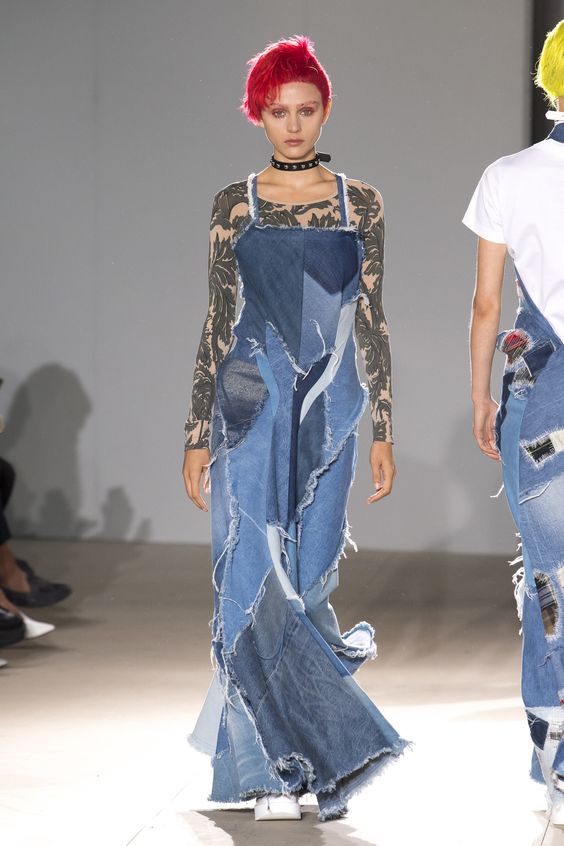 Yet though Junya Watanabe is closely associated with Rei Kawakubo and worked alongside her for eight years, he says their style is fundamentally different. If anything, Rei’s work is closer to art. Her catwalk fashions are often unwearable – not as in unflattering but literally pinning arms down or otherwise preventing movement, and distorting the human body in a way that makes more sense as a commentary on fashion than a way of selling garments.

Junya Watanabe, on the other hand, is more commercial. His clothes can be complicated and difficult to wear, yet beautiful in a way that is different from other designers. They certainly have that uniquely Japanese way of considering clothing’s relationship to the body, in that they aren’t tailored and form fitting, and the way of exploring the fabric is often found in radical designers from that country too. However, he objects to this reference point. “Oftentimes, interviewers or people in the fashion world like to refer to garments I make as Japanese or having a Japanese style or taste,” Watanabe says. “I want to ask you, why is that? To categorize, or do they really, truly feel a connection?”

They also resemble Issey Miyake’s work in some ways. Junya Watanabe admits he was influenced by the designer, who is a generation older. “I was drawn to the fact that designers before Miyake, like Dior and big names, would create clothes that were form­fitting. Issey totally changed the idea, completely different, and that impact was profound on me. Of making me want to create something, the idea of clothing much different from previous designers” he says.

Junya Watanabe and the classics

Junya Watanabe focusses on re-working design classics. Items like the classic white shirt, trench coat and biker jacket look completely different under his ideas, wearable yet radical. He has created reversible, waterproof designs which were demonstrated with a rain shower mid-catwalk, and reinvented denim, bringing it back under the spotlight as a material of great potential.

Junya Watanabe’s latest collection, SS19, looked at that fabric again, this time as faded country cousin patchwork allied to another favourite of his, punk, and the tulle of ballgowns. One of my favourite collections was SS17, where he expored fractal mathematics, with spirals and spikes which reminded me of origami and the
natural symmetry of plants. Working such precisely defined shapes in a fluid fabric like organza gave him extra technical points.

Again, it’s a technique he has looked at before, creating versions of the fold and pleat over many seasons. It’s one of his reference points. Junya Watanabe says he doesn’t look at other designers work to see what they are doing each season but explores his own path. “It all begins inside my head,” he says. “I start to look for strings of ideas that interest me. From then, I put my ideas to words. I work alongside my pattern makers, trying to put my words into creating and actually seeing it come to life. Photographs, artist’s work, anything that may seem relatable to what I am speaking about. After looking at visual elements, they start to craft.”

Surprisingly in view of his thoughtful work for the catwalk, Junya Watanabe’s ready to wear lines are quite basic and mundane-looking. Conventional looking polyester anoraks with a reflective strip and four pockets retail for nearly a thousand pounds, yet look like anything you’d find on the high street for around fifty. The reflective strip part is the twist – although it’s quite a fitting safety feature on an anorak, it’s also applied to jumpers and jeans this season, for a signature look.

As with any designer, there are a band of avid collectors of his ready-to-wear garments. They aren’t necessarily looking for the showpieces but the ones only someone in the know would spot. They desperately seek pieces from all seasons; sometimes specific garments, sometimes anything with the label, Junya Watanabe will bring them joy.

These collectors, many of them men, might be looking for something to wear themselves – it doesn’t matter to them that it is not current season, or even designed for the opposite gender they will mix and match from all seasons and collections. “If the garment fits, is stylish, and you feel it can be worn in whatever scenario, then why not?” says Rory Cole, who founded an online group for Junya Watanabe fans and has a large personal collection of both men and women’s wear.

Others are keen to find and keep pieces for posterity and, museum style, would never think to even try them on. These collectors buy, sell and swap pieces online and are keen to discuss the designer and and his work. Each detail of each garment of a collection is dissected and pored over: in fact, they probably have a thousand times more to say about them than Junya Watanabe himself. “I don’t want to express it in words,” Junya Wanatabe said, typically enigmatically when asked about his AW18 collection backstage. Don’t worry, Junya. Your fans will do it for you.

Eva Lutyens, the Scientist Who Became a Fashion Designer