Zandra Rhodes is the pink haired, turquoise eye-shadowed 79 year old designer who wears her own colourful work almost exclusively, accented by huge glass jewellery by Andrew Logan. She is still designing and you will instantly recognise her if you see her tiny, bright figure around London.

She first came to fame in the 1970s, and Princess Diana and Freddie Mercury both wore her designs, which are inspired by many different countries and classically feature intricate prints on flowing garments.

Zandra Rhodes was born in Kent, UK, in 1940. Her mother, who died when she was 24, was a dressmaker and taught at the local art college, and her father was a lorry driver. Her parents, in their youth, were ballroom-dancing champions, and they met while ballroom dancing.

Zandra’s father was brought up by a great uncle and aunt, both of whom were heavy drinkers, which is why her father did not drink at all. But her mother smoked heavily instead, and that’s what she died from – lung cancer. “My mother was an exotic type of person who liked having fun, but he was always complaining, just like Alf Garnett.” Zandra remembers. “I didn’t get on with my father.”

Rhodes attended Medway College of Art which her mother taught at, but they pretended not to know each other. One of her favourite memories was going to visit her only surviving grandparent, her maternal grandmother.

Zandra was so eccentrically dressed by her mother on those occasions that she would have to avoid the local children on the way, because they would throw stones at her. When she reached her granny’s she would sit next to her and chat, and her grandmother taught her to knit mittens. As a child and teenager she was studious, and would stay at home doing schoolwork rather than going out with friends. 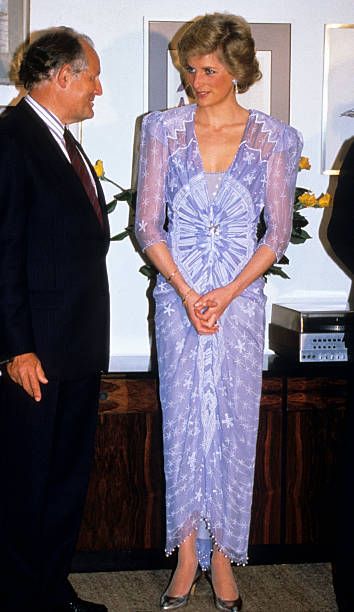 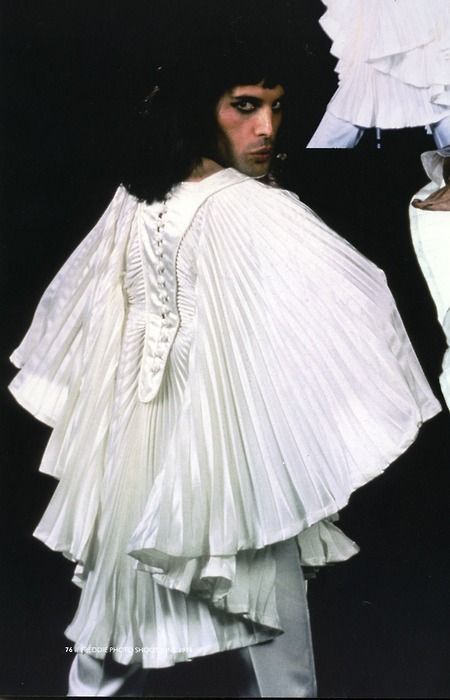 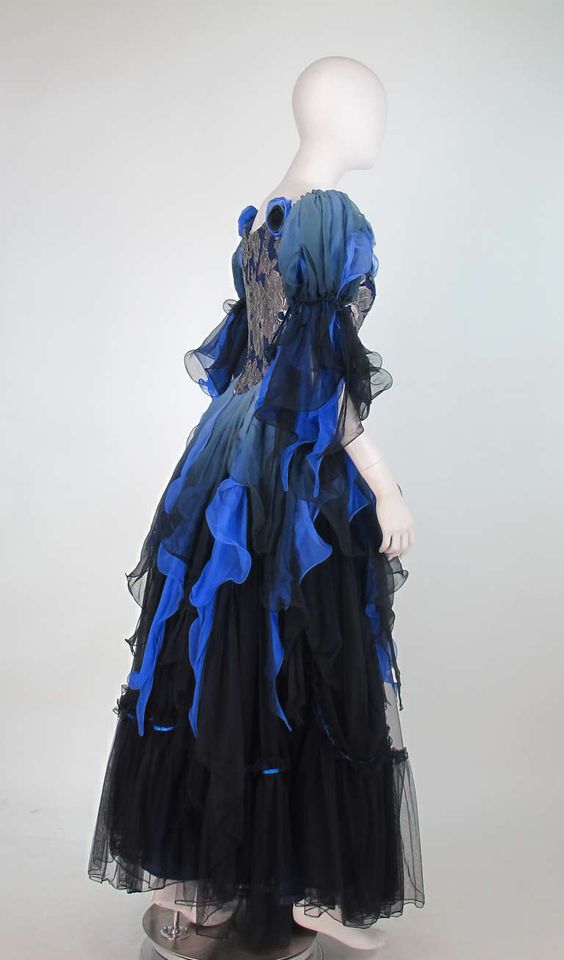 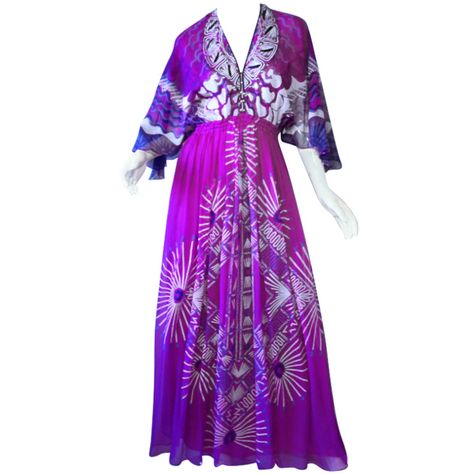 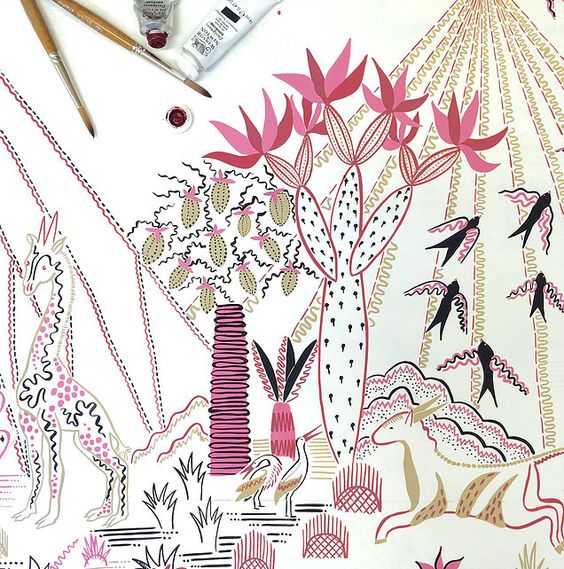 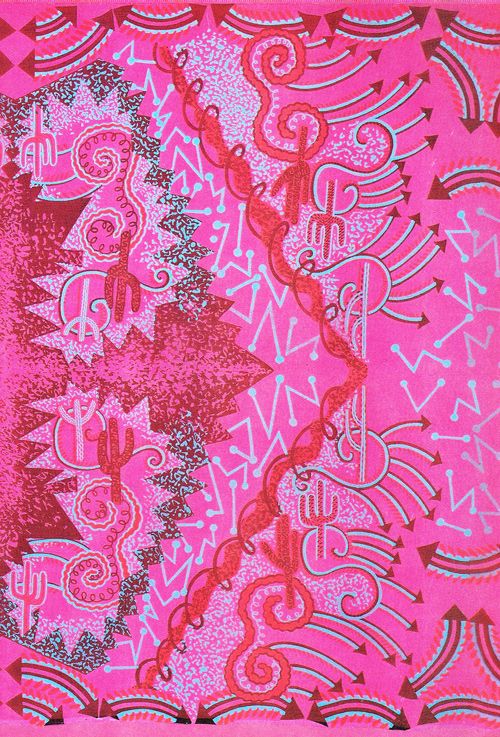 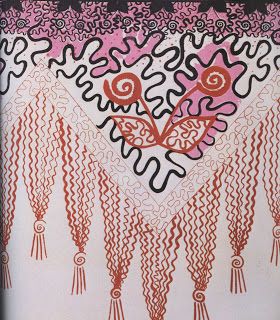 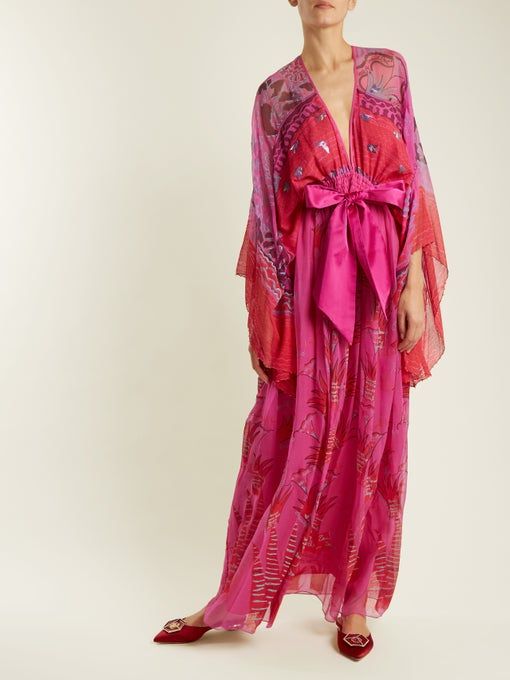 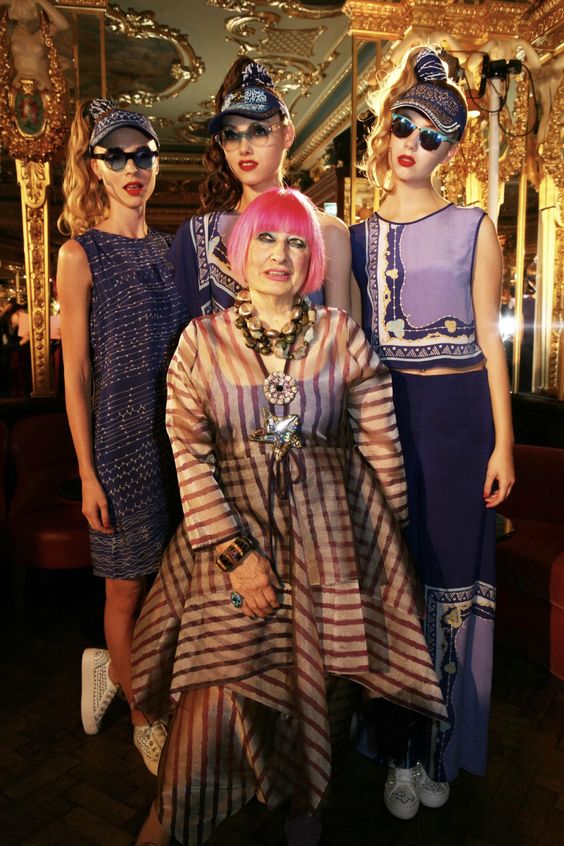 Later, Zandra Rhodes went to the Royal College of Art. Rhodes initially specialised in print design. She opened a shop on Fulham Road in 1966 with a friend, Sylvia Ayton. Ayton designed the shape of the garments and Rhodes the prints to go on them. Later, Rhodes branched out on her own and had a shop in her own name. She lived in Bayswater in the 1970s, in a small attic where she lived and worked and her clients, who included Queen’s Freddie Mercury, Bianca Jagger, Jackie Onassis, and Lauren Bacall came to her.

By the 1980s, she was dressing the Royals. Princess Di, Fergie and Princess Anne were all photographed in her outfits. “Diana was very nice and seemed very shy. She would pay a surprise visit with her friend Sarah and try a dress on in my shop. I would be slaving away in the factory, but I would be called in and asked to make up the real one with her measurements or make it in another colour. Then I would go to the Palace to fit it.”

By the 1990s, when minimalism was more fashionable, her work fell out of favour. She closed down her London shop, Bayswater workspace and factory in Olympia. In 2004 she stopped showing at London Fashion Week altogether for nine years, only doing catwalk shows again in 2015. She moved to California with her boyfriend, and showed out of her workspace there.

Zandra Rhodes and her Long-Term Boyfriend

In 1975 she had got together with Salah Hassanein, the ex-president of Warner Brothers. He left school at the age of 14. They met at a charity ball in New York. They had a lasting relationship and she was always very proud of him.”He’s the guy who founded the multiplex cinema”. For many years she would spend half her time in America with him, returning to London every ten days. He died earlier this year at their shared home in California at the age of 98.

In 1997 Zandra Rhodes was awarded a CBE, and in 2014 she was made a Dame. “The proudest moment of my life was being made a Dame. I’ve met the Queen on five occasions. She does a wonderful job”. For the occasion, Zandra wore a Piers Atkinson hat with a huge rhinestone egg on top.

“I make the world’s most beautiful dresses anyway so I wear those.”

“I only ever wear clothes I have designed. If I wear something that is practical but not one of my designs, then I adapt it. So at the moment, I’m wearing pink dungarees to work in, but I’ve printed all over them. If you’re a designer and you’re not wearing your own product, then what do you believe in? What are you selling?”

She opened the Fashion and Textile Museum near London Bridge in 2002. It was officially opened by Princess Michael of Kent. Designed by Mexican architect Ricardo Legorreta, it is a wonderful pink and orange oasis near London Bridge. The exhibitions there aren’t huge, but wonderfully curated and always interesting.

The assistants always seem to be interns though, who don’t get paid. However, Zandra Rhodes does welcome them to come and live with her in her apartment, which is next door to the museum, for free if they don’t have anywhere else to stay. I imagine that staying with such a fascinating woman must be payment enough. Rhodes also cooks lunch for the team one day a week – generally soup followed by ice cream and jam. But in general, she does not have much to do with the day to day running of the museum, since she is so busy elsewhere.

She views herself as a workaholic. In the past, she has designed needlepoint collections, several different bed linen collection for different brands, wallpaper, and china for both Royal Doulton and Marks and Spencer. Rhodes teamed up with Millets to produce a range of outdoor kit ranging from tents to T-shirts and worked with Sony on the Giga Juke music system. She also designed the costumes for Aida at the Coliseum, and received an Emmy for the costume design of Romeo and Juliet on Ice. The designer has also just finished filming Celebrity Masterchef UK.

Design-wise, she is currently working on the next catwalk collection. It’s inspired by by her historical pieces while introducing new prints and shapes. Everything is designed and created at her London studio.

If you’d like to see more of Zandra’s work, she currently has a 50 year retrospective at the Fashion and Textile Museum. It’s on until 26th January 2020.

Ponchos – never out of fashion

Ponchos – never out of fashion