“It’s Lacroix, darling!” And in the TV show Absolutely Fabulous, on would flounce Edina (Jennifer Saunders) in an over the top get up of outrageously clashing colours and exaggerated details. Thus for many, the creations of Christian Lacroix are synonymous with all that is ridiculous and laughable about fashion.

Which is a shame, because, although it’s true that Christian Lacroix’s clothes are not for those who wish to blend in, his design is based on a very sound understanding of historical fashion and his fabrics, construction and detailing would make Marie Antoinette blush with joy. Although on the other hand, his company never made a profit in its 22-year history.

Christian Lacroix – French through and through

Christian Lacroix (b 16.05.1951) grew up in Arles, Southern France. Arles is the town that so inspired the painter Vincent van Gogh and perhaps there’s something in the air there because Lacroix started drawing obsessively at the age of three, as most children do, but his subjects were quite unusual – the matadors in the bullring, the gypsies in the town square, and his grandfather, who had a golden bicycle and suits lined in green silk. The young Lacroix loved to climb into the attic and pore over the fashion magazines he found there.

He also loved the theatre as a child, demanding to go as often as possible. From this inspiration he determined that he would be a costume designer when he grew up. He then went to Paris to study art history, where he continued going to the theatre as often as possible, sketching the costumes and inventing his own new ones for the characters. When his girlfriend, Francois Rosensthiel, saw them she declared they were incredible, and commented that they were so much like current fashion trends, too.

Lacroix completed his art history doctoral dissertation on the subject of dress in 17th century painting. He planned to go on to become a museum curator. But Francoise and their mutual friend Jean Jaque Picard had other ideas. A creative talent like his shouldn’t go to waste! Picard had fashion contacts, and the pair got him an apprenticeship at Hermes. Lacroix learned the tricks of the trade there, and in 1981 Christian Lacroix was named head designer at Patou, a venerable yet ailing old French fashion house.

Lacroix electrified Patou and with it French couture, winning a coveted Golden Thimble for his work and generally being name checked as the future of couture, the successor to Dior and Yves Saint Laurent who had both done so much in their turn to revitalise fashion in their time. 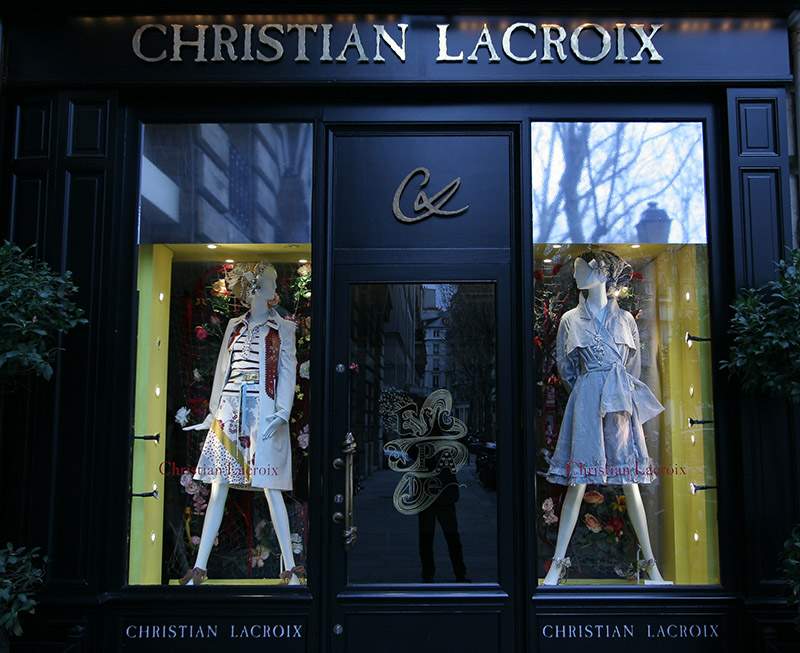 In 1987, 36-year-old Lacroix (along with Jean Jaque Picard as his partner) launched the House of Christian Lacroix. It was the first new couture house since Saint Laurent himself had branched off on his own, 25 years earlier.

Maison Christian Lacroix was funded to the tune of eight million dollars by Bernard Arnault of LVMH. Which such a lot of money to play with, and wild encouragement from the press, who could blame Lacroix for indulging his wildest dreams? His creations were lavish, costume like – indeed more suitable for a historical pageant on acid that walking down the street doing a bit of shopping.

20 years of Christian Dior on the catwalk. Image via Wikipedia Commons.

But the press and critics loved it. His first collection, in 1987, was an enthusiastic tribute to the native dress of the French countryside where he grew up. He reinvented traditional shawls, corsets and bell skirts in a riot of colours, with scarlet, black and white joined by fuchsia, hot orange, crocus yellow, and purple, and added stripes, polka dots, and Madras checks along with lace, embroidery and pearl edging.

It sounds too much and in some ways, of course it was, but his work was always a joyous display and his mastery of coulor meant that these seemingly disparate colours worked togther and created an elegant, although bold effect.

Because of his colour sense, from 2002 – 2005, as well as his own House, Lacroix was appointed head of another House famous for its bold colours, Pucci.

Christian Lacroix’s most famous creation was the puffball skirt. He liked the volume of historical dresses but combined it with the Eighties penchant for tiny skirts, creating a fun and widely copied silhouette, similar to Vivienne Westwood’s mini-crini.

Due to his theatricality, his work was perfect for weddings. He was often commissioned to make the outfits for an entire wedding party – wedding gown, bridesmaid’s dresses, pageboy outfit and even mother of the bride, so the whole party co-ordinated beautifully and memorably.

And of course, Lacroix was often commissioned for theatre productions too. He made costumes for Mikhail Baryshnikov’s American Ballet Theatre, for several French opera companies, for bullfighting events, and for many revues. He was also wildly successful at interior design, with is bold sense of colour and motif perfect for hotels. Less successful was his attempt to branch out, as most couture houses must, into sportswear, perfumes, and ready to wear.

And despite the enthusiastic press reception and copying by the high street, even less successful was Christian Lacroix’s actual couture line. Losing money hand over fist, Bernard Arnault sold the business to the Falic Brothers in 2005, but by 2008 the debts amounted to over 13 million dollars. In May 2009, The House of Lacroix went into administration.

Christian Lacroix himself continues to design, with some surprising commissions – in 2010 he was appointed Creative Director of the French mint, designing limited edition coins and medals. In 2012 he created critically acclaimed designs for French ballet La Source, with 77 looks using two million Swarovski crystals. His most recent work is a production of A Midsummer Night’s Dream for the Paris Bastille in 2017 and the opulent Christian Lacroix spirit also lives on in perfume and fabric licensing.