Heidemarie Jiline Sander (b.11.27.1943) or Jil Sander as she is better known, was the ultimate proponent of taste and refinement in 1990s fashion.

Like Giorgio Armani, she grew up in the post war period which for many meant an embracing of the bounty that followed the war; and like the American designer she firmly rejected this excess, kitch and frippery and demanded order and simplicity. Even as a small child, her bread had to be cut into neat squares and nicely presented on the plate or she would not eat it – and for a child who had recently experienced a distinct lack of any bread at all this was saying something. 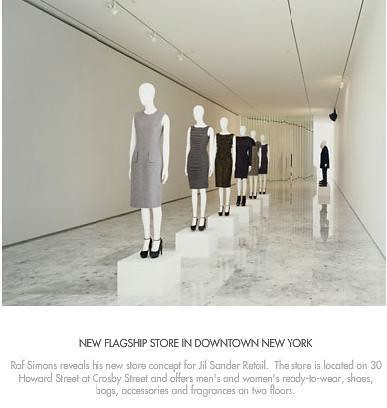 Jil Sander was born and grew up in Germany, studying textile design at an engineering college there and spending a brief period in Los Angeles as an exchange student. On her return in 1965 she worked as a fashion editor for Constanze magazine in Hamburg, and later Petra magazine too. However, she was constantly dissatisfied by the clothes she was presented with.

In 1968 the chemical company Hoechst asked her if she could produce a trend collection in order to promote their new synthetic fibre Trevira. The fee from this job was sufficient to create her own debut collection and set up a boutique to sell it in. As a business name, she chose Jil Sander, Heidi being “Too cute and too German”. Her boutique was in a Hamburg suburb and she painted it black on the outside, and pure white on the inside.

Within a week she had run out of stock, as her own collection of simple jackets, skirts and trousers flew out of the shop. She quickly supplemented with French imports: Thierry Mugler, Chole and Sonia Rykiel. The boutique was a huge success.

Jil Sander was another designer who aimed to translate the formality of men’s tailoring to women’s wear. Her speciality was trouser suits, and she aimed for a pared down uniform in high quality fabrics that working women could put on and look smart and self-confident without much fuss or thought. She deplored frills and furbelows and, while her designs were not uncomfortable, they were also not comfortable enough to encourage slouching and the resultant crumpled clothing. She made plain white shirts with enough stretch to fit well, but not enough that you could relax. She also did not encourage accessorisation or jewellery with her designs; they were to speak for themselves. “I think there is always a need for pure design. With pure design, you don’t need so much decoration.”, she commented.

Yet while this worked well in Germany, the designs didn’t seem to translate well. Her first catwalk show was in Paris in 1977, and it flopped. Because the tail end of the 70s wasn’t about minimalism, it was decidedly maximalist, and Paris wanted more, more, more, not less. She didn’t attempt another catwalk show until 1988, this time in Milan. By then, tastes had changed whilst her ethos had not. Now, people were bored of brilliant colours and exaggerated shapes. This one was a resounding success. By the end of the 1980s she was able to list her company on the Frankfurt stock exchange.

The 1990s was the decade when Jil Sander came into her own. In 1993 she opened a flagship store on the prestigious Avenue Montaigne in Paris, actually in former headquarters of master couturier Madeline Vionnet. She declared at its opening “A dress is perfect when there remains nothing more to be removed from it”. The fashion press now agreed.

The Queen of Less

Jil Sander became known as “The Queen of Less”. Double faced cashmere as soft and feather light as down and crisp cotton were her trademarks and while they didn’t look overtly expensive they were the height of luxury. By 1995, the Jil Sander group reported $114 million in sales and was stocked in Park Avenue, New York and Browns of London.

And yet the designer became despondent that she was only ever praised for the quality of her clothes, not their design. She began introducing collections which were far less uncompromising, softer and with touches of playfulness. Dresses, formerly a real rarity, began to appear with increasing regularity. The designer announced in the mid-Nineties that she didn’t “want Jil Sander to feel so deadly serious” and, though she herself had not worn a dress since the age of 30 she sent a whole array of delicate gowns down the catwalk. They were devastating in their simplicity yet replete with small pleats, trains, and carefully placed slits.

Jil Sander always resisted licensing as “We are not going to trumpet our name everywhere.” However, she does have a successful fragrance line. She has also teamed up with the Japanese brand Uniqlo in 2009 to create sell out collections for the low cost retailer.

By 1999, however, her House hit a low period as minimalism again fell out of favour. The Prada Group bought 75% shares, retaining her as both chairperson and chief designer. However, all did not go smoothly. Sander resigned as chairperson six months after selling to Prada, and as chief designer shortly after. Most of her design and production staff stormed out with her.

In spring 2003, in a surprise move, Jil Sander herself returned to the company as chief designer. Her consulting contract was for six years and she also received a stake in the company and a seat on the strategic committee. However, she broke this contact and left again in 2004. In 2012 she was back, but out again in 2013.

In the meantime the Belgian designer Raf Simons had headed the design process. Simons was a good choice as his aesthetic is also minimalist, but with a twist. He added details like neon colour, shine and even fringe to his crisp silhouettes. He even dared to go further: “I’ve given the house high heels and sexy red carpet dresses,” Simons told Vogue in 2010. “These things didn’t exist before.”

Today, Lucie Meier and Luke Meier head up the label.