Despite the lack of hard lines I almost want to liken her work to architecture, – Vionnet was a gifted mathematician and used that knowledge to calculate the geometry involved in her designs. Or perhaps sculpture – the dresses were conceptualized in three dimensions, as the designer draped fabric on a half sized wooden mannequin. The more usual way, then as now, was by drawing sketches. 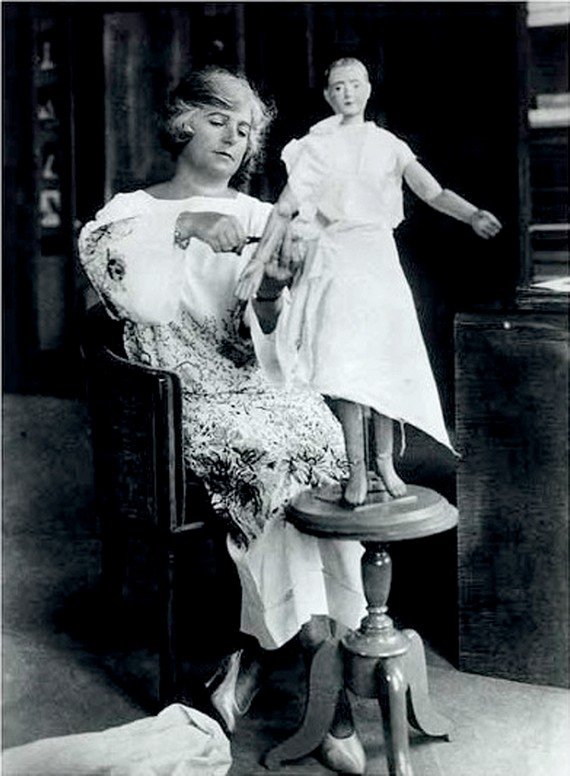 Madeleine Vionnet and her mannequin, about 1920

Vionnet also invented a revolutionary way of cutting her gowns on the bias. The technique of bias cutting already existed, but it was used minimally, on small parts of clothing such as collars to give them enough stretch to fit properly.

Nobody created whole gowns this way, perhaps in part because it was so extremely expensive – bias cutting means you are cutting on the diagonal of a fabric’s grain, and you can’t fit many pattern pieces side by side this way. It means you need many more yards of fabric than you would normally. 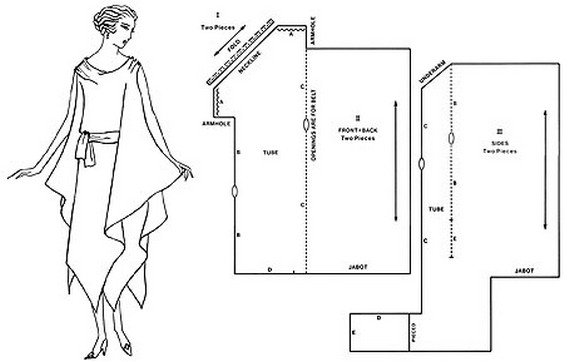 This diagram shows the precise mathematical geometry behind the flowing lines

In fact, eventually Vionnet was having fabric specially woven for her – two yards wider than normal. And not only specially woven – in 1918 her main supplier actually invented a fabric especially for her: an early synthetic called crêpe rosalba, perfect for her needs. 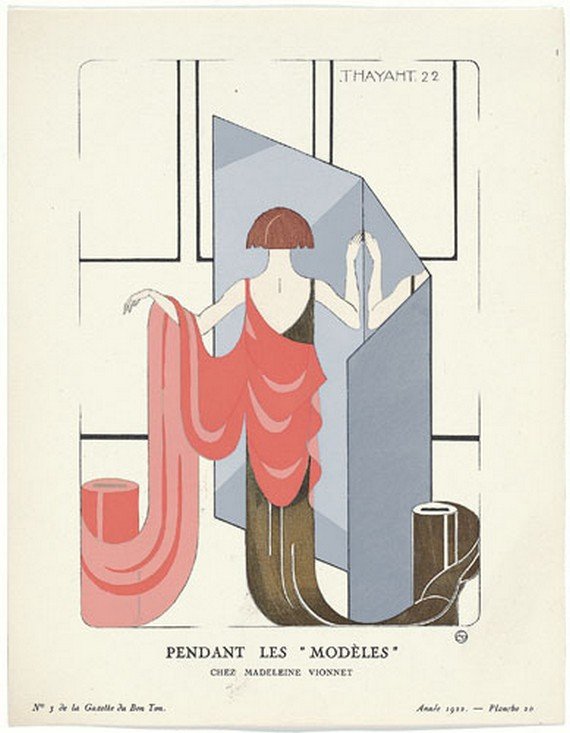 Cutting on the bias causes a fabric that is normally without any elasticity to stretch and drape to quite an astonishing degree – and because this slippery, heavy silk Vionnet was using now became pliable, and prone to distortions both desirable and undesirable (stretching and flowing over the bust: good. Stretching and wavering at the hem – a disaster) you can see that she needed to be both a very good seamstress, to control the unruly silk, and an even better designer, to cut seams accurately in the first place.

Because of this complexity however, once the dress was off many women found themselves gazing at it perplexed. They had to call Vionnet for instructions on how to get it back on again.

The complicated structure of the gowns left clients baffled