He made Princess Alexandra’s wedding dress, as well as dressing film stars Vivienne Leigh, Doris Day and Gertrude Lawrence. His work was so beautifully designed and exquisitely made he was known as the couturier who brought Paris style to London. 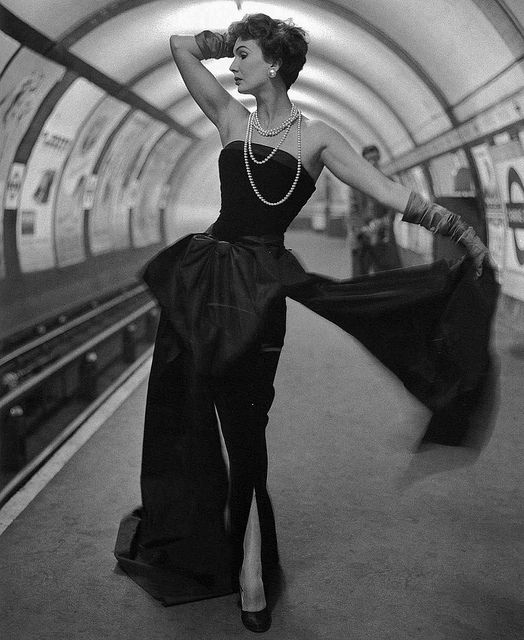 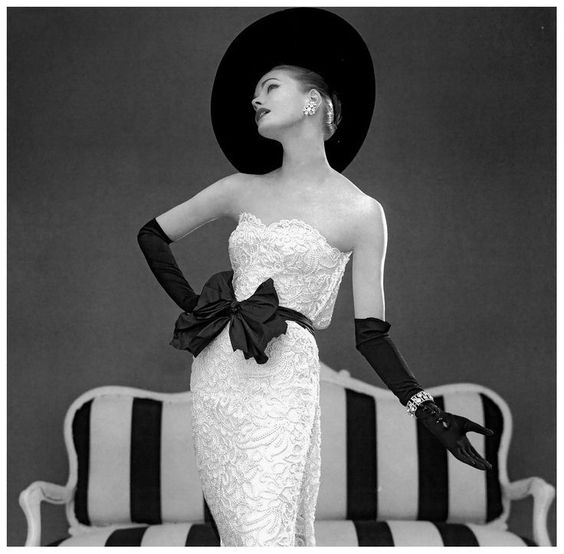 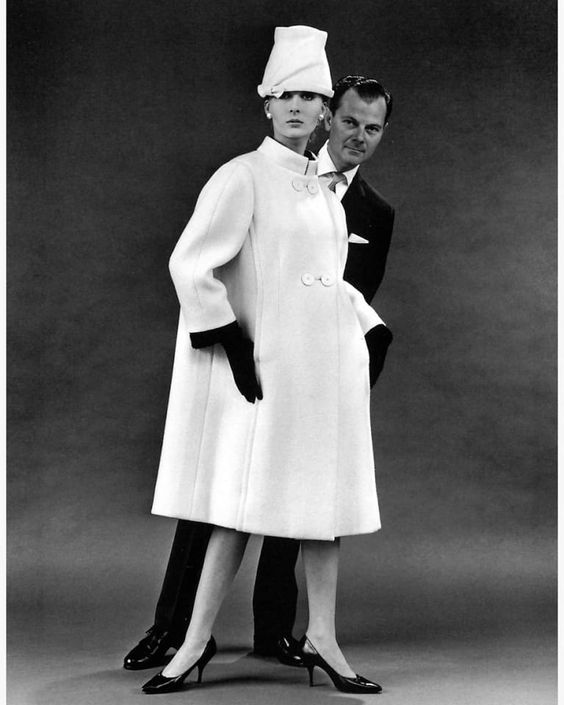 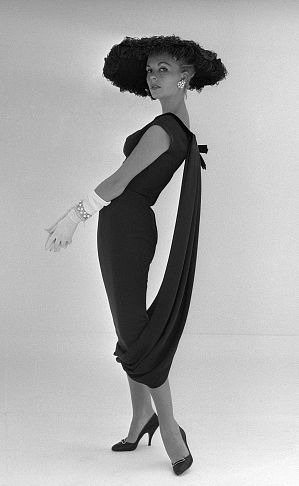 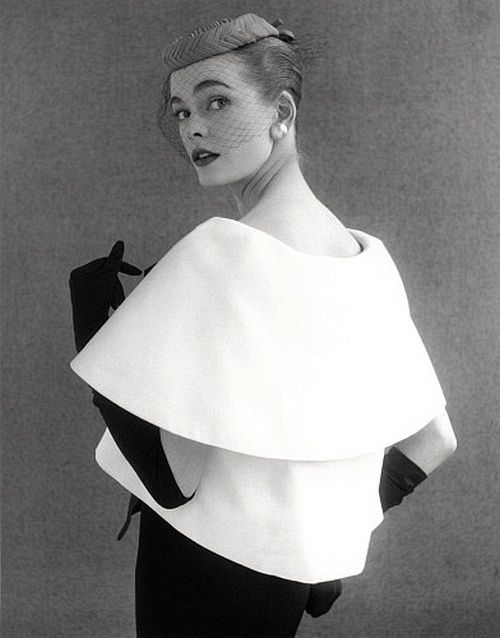 John Bryan Cavanagh was born in London on September 28, 1914, although he told newspapers he was born in County Mayo. He strongly identified as Irish. He was educated at St Paul’s School in London. His family were upper class and extremely affluent.

As a child, he was fascinated by royalty and high society, and much preferred reading the fashion magazines which detailed their exploits, to comics.

In 1932, at the age of 18, he became the secretary of the high fashion couturier Edward Molyneux. He rose to become the supervisor of the London branch, before becoming the designer’s personal assistant in Paris.

During the war, John Cavanagh was a member of the British Army Intelligence corps, from 1940-1946. On leaving he worked as a design assistant for Pierre Balmain, until 1952 when he left to set up his own House.

John Cavanagh – A New Star in the London Couture Sky

John Cavanagh’s first haute couture collection launched in 1952. It contained six separate categories, a very thorough offering of morning, afternoon, dressy afternoon, cocktail, dinner and evening. He had snagged Edward Molyneux’s staff as his mentor closed his business, and having already worked with them himself he suffered no teething problems. He also took over the building they had worked in. In the prestigious location of Curzon Street in Mayfair, it was a Georgian house with a sweeping staircase which contained a dove grey showroom, a fitting room, cabine for the models, and three workrooms for the pattern cutters and seamstresses.

Alison Settle, the fashion critic, who was known to sometimes be very critical indeed wrote rapturously: “A new star shines in the London Couture sky. Seldom has a more beautiful and discreet collection been seen than that of John Cavanagh.” His work really was beautiful, with simple, sweeping lines that were both almost futuristic in their clean shapes and also classic and ladylike enough not to scare the horses. But the construction was incredible.

John Cavanagh’s personal assistant, Lindsay Evans Robertson, described his work as “Paris in London. There was a lightness of touch, a feminine delicacy, a fragility unlike the work of any of the other London couturiers.”

That first year a red dress of John Cavanagh’s featured in an advert for Gala cosmetics. This became hugely copied, with knock offs in all price ranges quickly coming into existence. Cavanaugh wasn’t too bothered however, even finding it an egalitarian move. Later, he was to design paper patterns for Vogue to bring his design skills to the mass market. Although they did not have the very complicated underpinnings of his seemingly-simple gowns, they captured the simple part well, and were extremely popular.

John Cavanagh was a master of colour. With fabrics, he liked to link to his Irish roots with Donegal tweeds and Irish lace, but he also used fine French silks. When Abstract Expressionism came storming the barricades of the art world, he was inspired by it and commissioned very modern fabric with drips and splashes worthy of Jackson Pollack himself and blocks of colour just like Ellsworth Kelly.

John Cavanagh was a dapper man, always well turned out in a Savile Row suit, perfectly tailored. He loved to spend time at society occasions, at dinner parties, the races and the theatre with the rich, the famous and the titled. This was great on one hand, because they were exactly the people he needed to charm to get them to buy his work. But on the other, he did spend rather too much time on it and was frequently hobnobbing when he should have been attending to his collections. 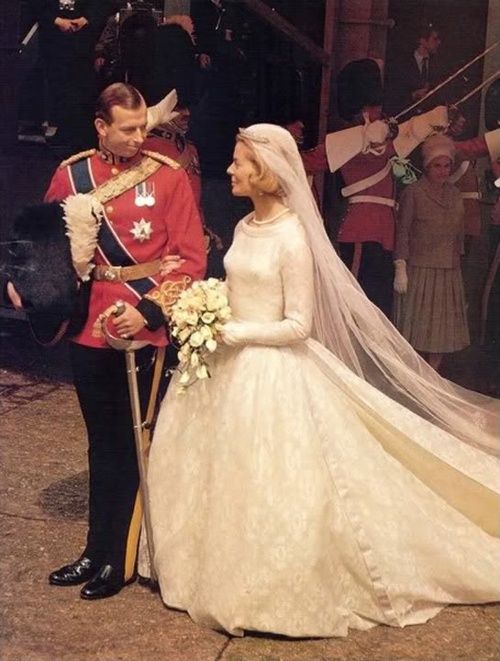 The wedding of the Duke of Kent and Katherine Worsely, 1961. Image via Pinterest.

In 1961 John Cavanagh designed Katharine Worsley’s wedding dress for her marriage to Prince Edward, son of Princess Marina, Duchess of Kent. Marina was a client of Cavanagh suggested the couturier to her daughter for the important gown. It was was made of an amazing 237 yards of diaphanous white silk gauze. The boat necked, long sleeved gown with its perfectly modelled bodice, voluminous skirt and long train, was a perfect combination of traditional and modern and a huge success.

Demi-Couture, Ready to Wear and Branching Out

In 1959 John Cavanagh moved with the spirit of the times, creating a demi-couture boutique within his premises. These were designed in the same fabrics and very similar shapes to his couture line, in order to harmonise with it on the shop floor. They were still made to measure but only required one fitting.

But by 1966 it was clear that more radical efforts were needed. John Cavanagh opened a ready to wear boutique next to his couture house.  In 1969 With great hope he took this ready to wear line abroad, to the Australian suburb of Rose Bay in Sydney. It opened with great fanfare and received a lot of press. This Australian line was different to the clothes sold in England. The fabrics were lighter and the colour even brighter. They were all made in London. Which is where most of them returned after a very short time, as the collection was largely unsold.

As with so many couturiers of the time, despite these efforts to branch out, by the beginning of the 1970s it was clear that couture was history. “It’s a pony and trap in a world whizzing round in Minis” is how he put it. In 1973 he gave his archive, including patterns, design sketches, fabric swatches, photographs and press clippings to the V&A’s Archive of Art and Design (AAD). In 1974 the business was closed and the last of his sample garments sold to his clients at knock-down prices.