More prosaically, haute couture means “high dressmaking” in French. A piece of haute couture is a made-to-measure garment produced by Parisian designer who meets a strict criteria and is on a certain list, which deems them to be an haute couturier. Although the term is protected by French law, it’s now generally used for high end, custom fitted garments made in any city. It’s often also called just couture.

Haute couture has been around for centuries, starting in the French royal court in the 17th century where Queen Marie Antoinette’s dressmaker, Rose Bertin, made such exquisite work that it became elevated to a higher art than mere clothing, or just something to cover the body with. Of course, richer people, and kings and queens, had always worn something fancier, furrier and of finer fabric than the common folk, but Marie Antoinette was a total fashion queen, and so we’ll acknowledge that she and Bertin started the haute couture thing off.

What are these haute couture rules, then?

To be honest, I don’t know what the origin of this image is, but I like it! Via originalcinemaniac.

The wonderfully named Chambre Syndicale de la Haute Couture is based at the Ministry for Industry. It’s a kind of union and guardian of the grand tradition of French fashion. The Chambre Syndicale exists both to protect its members, promote them, and to keep the standard suitably high. It also gets to choose which fashion houses can be named a true haute couture house.

The houses on the list are not picked on a whim. They have to do certain things. These are that they need to show a collection twice a year, of at least fifty day and evening garments. Their workshop needs to be based in Paris and have at least twenty full time technical people, and fifteen other staff members. And of course, they must design clothes that are made to measure for private clients, that involve a process of fitting.

These rules have changed from time to time. In the 1960s, the number of garments that constituted a collection was set at sixty, although some designers showed many more. There were 34 official couturiers in 1962. In 1917, there had been 98.

There are currently fourteen members of the Chambre Syndicale, who are officially Haute Couturiers. They are a mixture of venerable names, and some surprising ones. Currently they are: Adeline André, Alexandre Vauthier, Alexis Mabille, Bouchra Jarrar, Chanel, Dior, Frank Sorbier, Giambattista Valli, Givenchy, Jean-Paul Gaultier, Julien Fournié, Maison Margiela, Schiaparelli and Stéphane Rolland. There are also 18 guest members, and seven correspondent members, that is, non-French.

And how did it all start? 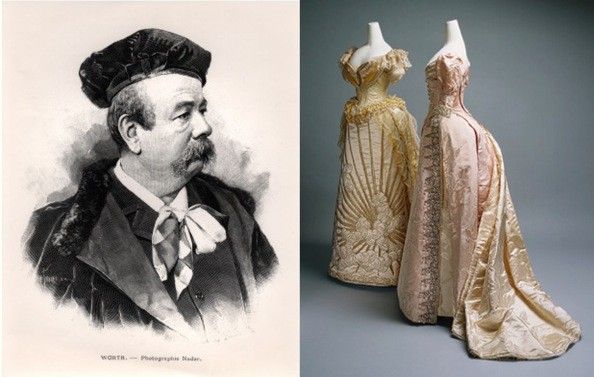 What is haute couture? Charles Frederick Worth and some of his work. Image via Pinterest.

So, everybody agrees that Charles Frederick Worth was the father of haute couture and the entire wonderful system of fashion in Paris, not least because he said so himself. Obviously, it did all exist before, see Mme Bertin and the French Court above. But Worth was an excellent self-publicist.

Ironically, Worth was English. He came to Paris and set up a dressmaking salon. But he decreed that what he did was far more than dressmaking – it was High Dressmaking – Haute Couture. His work was, it has to be said, exquisite. He dressed the empress Eugénie, and was immensely popular with both the French aristocracy and the English, who would excitedly travel across the Channel to see his collections and pick their spring-summer and autumn-winter wardrobes. Other dressmakers began to conduct themselves in a more organised fashion in his wake.

The magazines that both popularised couture and became a nuisance

With the great popularity of French fashion came magazines illustrating and depicting the latest frocks. Women read them and daydreamed about one day owning a couture dress. Some, more practically, got their own dressmakers to copy the outfits. Small scale, individual copying like this was inevitable and probably didn’t impact the designers business too much. But with the growth of department stores, large scale rip offs became the norm. A buyer from a shop in America could come and see the collections, try on a dress, sketch it and leave. They would then get their own factory to run up a few hundred cheap copies, at a great profit for themselves but with no payment to the designer.

Charles Frederick Worth set up The Chambre Syndicale De La Confection Et De La Couture Pour Dames Et Fillettes in 1868 initially to combat this kind of piracy.  The proposal was that Paris’s top couturiers join together to agree to fight the problem. They allowed the big department stores to make copies, but only under their own terms. This included paying the designer a fee. They tried to prevent buyers or department store representatives who didn’t pay from even getting a glimpse of their goods. This would only work if all the designers agreed to fight together.

So, haute couture, how is it going?

The name of the group has changed and its purpose fluctuated over time. On January 23rd 1945, the  designation “Haute Couture” became a  legally registered designation of origin. This makes it a bit like Champagne, which can only be called that if it comes from the Champagne region of France. Anything else, however delicious, is only sparkling wine. Fashion that is not sanctified boy the Chambre can never be haute couture, but only sparkling, delicious clothing. With the groundwork laid by generations before, most big labels have their own law department to chase copyright infringements and other problems of that sort. The Chambre now is more ceremonial – to get official badge of approval is a high honour. It also works to promote couture, luxury branding, and Paris itself.