There are few photo series as striking and charming as Barbara Goalen, imperious on a Lancashire rooftop while her train flies out beside her, anchored by a small man in a suit. To go with that, we have the model in checks, sitting before a checked tablecloth in a worker’s canteen with a mug of tea. And, my favourite, Barbara sharing some hot gossip with a trio of mill workers in cotton dresses, as they laugh and lean right in to tell her the details.

These 1952 photos by Elsbeth Juda were published to promote Britain’s cotton trade. What had been conceived as a few quick photo ops turned into a three-day tour of Lancashire mills, as the two women realised that the region and people working there were every bit as fascinating as some of the more exotic locations they were commissioned to shoot. It was a warm and lively collaboration. 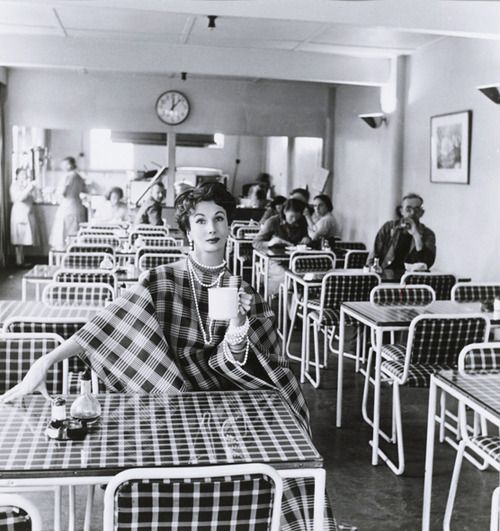 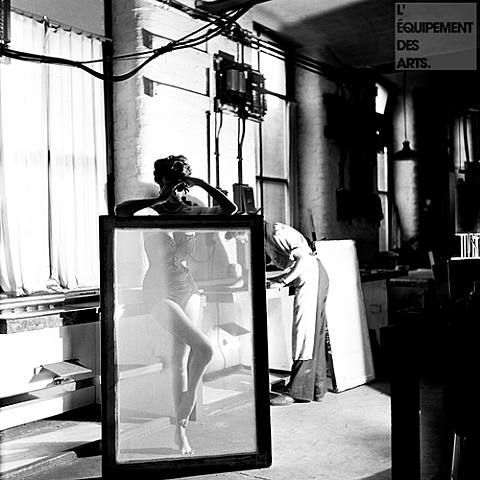 Elspeth Juda, Milling Around, 1952 with Barbara Goalen. Image via Pinterest. 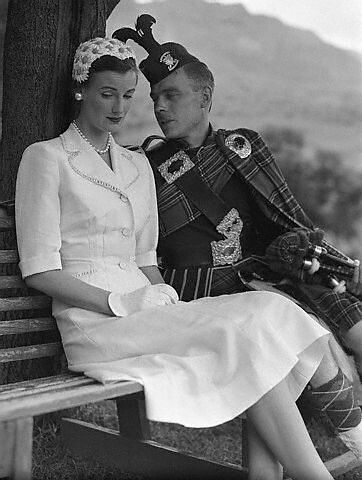 Dovima, 1951, in South Africa by Norman Parkinson. Image via Pinterest. 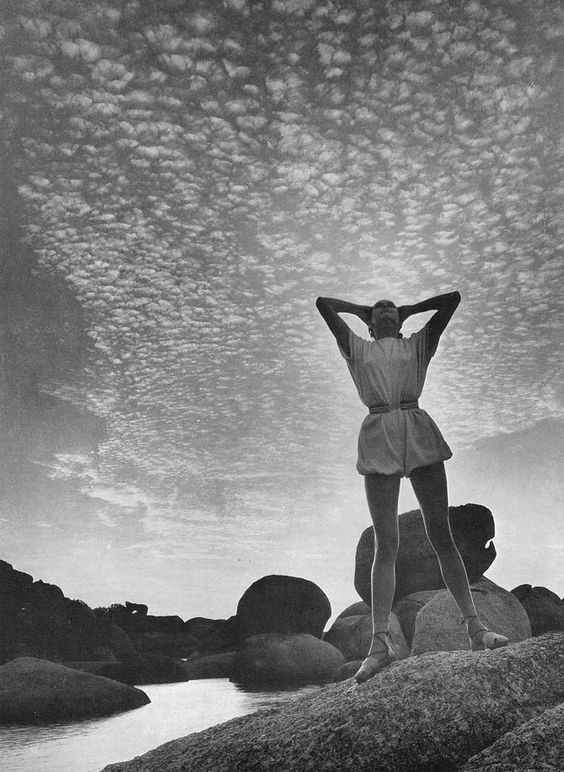 Cotton was once a huge industry for Britain. By the time these photos were produced, its peak had long passed, and the government was trying various strategies to reverse this trend and bring it back into popularity. Though the cotton trade in Britain had historically been problematic in many ways, including child labour, links to slavery, and the machinery of the Industrial Revolution destroying local cottage industries in the 19th century, by the 20th century many cities, especially in the North, depended on cotton and had done for over a century.

The problem was that by the end of the 19th century, the mill owners were exporting to India, Indonesia, Africa and the Far East with a small home market too. They felt so secure in their world dominance of cotton that they didn’t update their equipment. Germany, Japan and India, their major competitors in textiles, stole a march on them by buying new, much more efficient equipment – ironically created by Lancashire engineering firms. Then, the First World War was a huge blow to the industry, as it was so dependant on ships to bring the raw material into the UK and then to export the finished products. Merchant ships were taken over for war purposes. The markets abroad found other suppliers.

Lancashire mills resumed work in 1918, but the decline was in place. The mills modernised their equipment but it was too little, too late, and massive unemployment ensued. By the 1930s, things were looking up a bit, as new markets had been found in South America. In 1939 the Cotton Board was formed by an act of Parliament as an organised effort to promote British cotton. But this was on the eve of the second world war. With more disaster looming, the Cotton Board’s job was to “Promote the welfare of the industry by internal reorganisation, by the development of export trade, scientific research, propaganda and other means.” 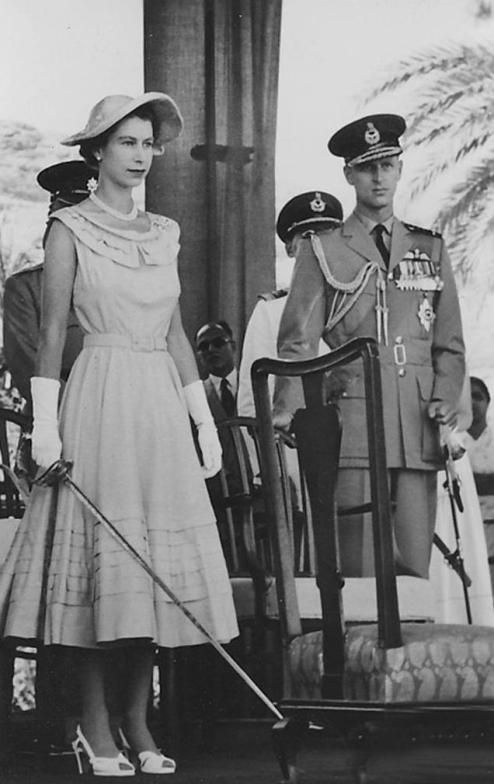 Queen Elizabeth on tour in one of her cotton dresses. Image via Pinterest 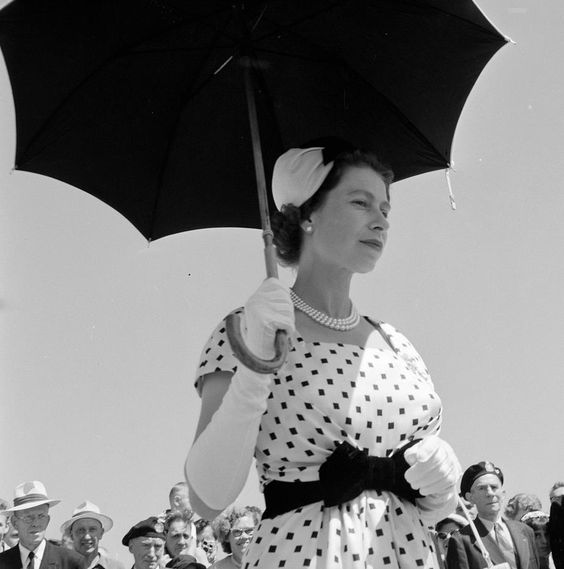 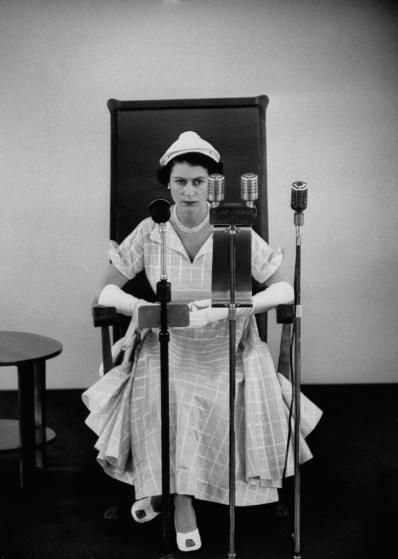 The Queen in one of the collection of cotton dresses she packed for her trip to Australia and New Zealand in 1953. Image via Pinterest. 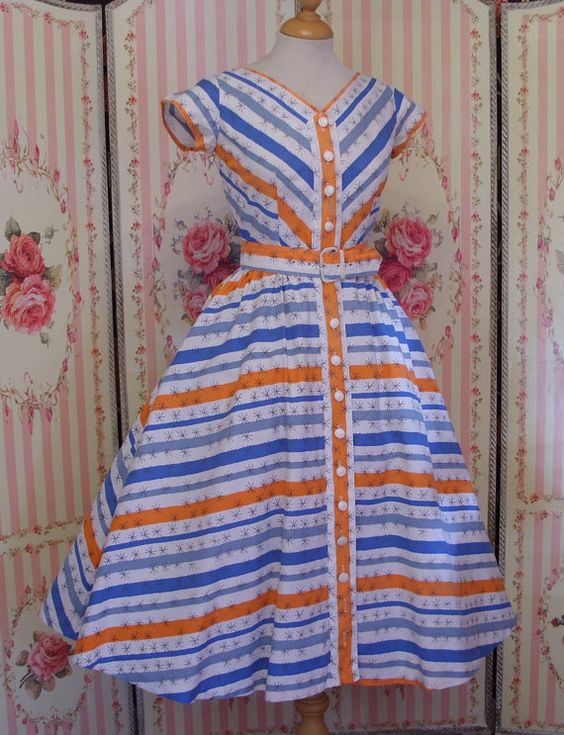 One of the cotton dresses designed by Norman Hartnell to promote British cotton in the 1950s. Image via Pinterest.

The Cotton Board set up a very modern-sounding “Colour, Style and Design Centre” in Manchester. It became known for its enthusiastic, innovative and effective approach, combining collaborations with manufacturers and great publicity campaigns and exhibitions.

South America, the target of much of this publicity, was unaffected by war. The idea was to show that British cotton was too. In 1941, a fashion show was planned for Buenos Aires. To support it, displays of Lancashire fabrics were arranged in the upmarket windows of Buenos Aires’ top shops, including the Harrods in the city. Norman Hartnell, Molyneux, Charles Creed, Worth, Victor Stiebel, Peter Russell, Digby Morton, and Lachasse were the London couturiers who agreed to take part. Paquin joined them from Paris. This is extremely impressive, given that in the UK cotton was associated basically with work wear, beach clothes and underwear, not cotton dresses. It was an easily washed, simple fabric. It was not material for couturiers to work with.

British Vogue got on board with a four-page feature. They sent Cecil Beaton to take some photos of the designs before they were sent abroad. The fashion parade on Copacabana beach was filmed by British Pathé and shown in cinemas, alongside some extra footage of the models enjoying the sunshine, frolicking on the beach. The collection was also shown in another film, Queen Cotton. Queen Cotton had a salon parade of the designs, alongside footage of the Lancashire Mills and was extremely popular.

Ten years later, in 1951, the war and rationing was over. The Festival of Britain was designed to celebrate the achievements of British industry, and the Cotton Board had lots of events. Cotton in Fashion was held during the new Fashion Fortnight, and featured a fashion show in the ballroom of the Dorchester. It was great publicity and several newspapers and magazines covered it.

1953, Coronation year, was an even better year for fashion. The need for couture gowns by for the coronation itself along with ballgowns and afternoon gowns for the attendant events had made fashion a topic of conversation and was a huge boon to the British economy. The Queen immediately toured Australia and New Zealand, wearing cool and crisp cotton dresses that were suited to the climate. In 1956 Princess Margaret toured British East Africa in similar cotton dresses, many by Manchester firm Horrocks.

Over the years to come, many more extravagant cotton-based fashion shows were held. There were prestigious guests in the audience and coverage by all the major newspapers and magazines. But none of this could rescue the cotton industry. Cheap Indian imports began to flood the market in the 1960s and Britain couldn’t compete any more. The Cotton Board was re-named The Textile Council in 1967, and closed completely in 1971.