Balmain Couture The Directrice of Pierre Balmain Couture from 1947 to 1976 was the extraordinary Ginette Spanier. Her job was to oversee the running of the whole House. I have already written a little about her life, so here is the fascinating information based on her account, of how a couturier in Paris was run. Or I should say, this is how she did it since she’s quite clear that her way of doing things was unique.

The House of Balmain employed 600 people directly in 1954, plus the workers in associated businesses such as accessories, specialised embroidery and fabrics.

Spanier always insisted that Pierre Balmain Couture was a much friendlier couture house than many others and lacked snobbishness. It also lacked râler. This is the term for what Spanier calls the “grumble-grumble-and-do-nothing-about-it” school of action. Ever had a disdainful Parisian or Hampsteadian waiter? They exhibit perfect râler. At Balmain, râler was forbidden and amiability was chic.

There were two collections a year. Balmain designed a lot of pieces, over 150 per collection. A new season started with the fabric and trim salespeople showing their latest wares to Pierre Balmain and his assistant and close collaborator, Erik Mortensen. This is one of the reasons that every designer’s collection in a season still tends to have some discernable similarity – they all buy from the same top fabric merchants.

Then on to the design stage. Balmain would have an initial inspiration. He threw ideas around with Mortensen until it formed the new Line and made sketches for the workroom. He had a team of master cutters and seamstresses, although he could cut too, and he often made a pattern himself. 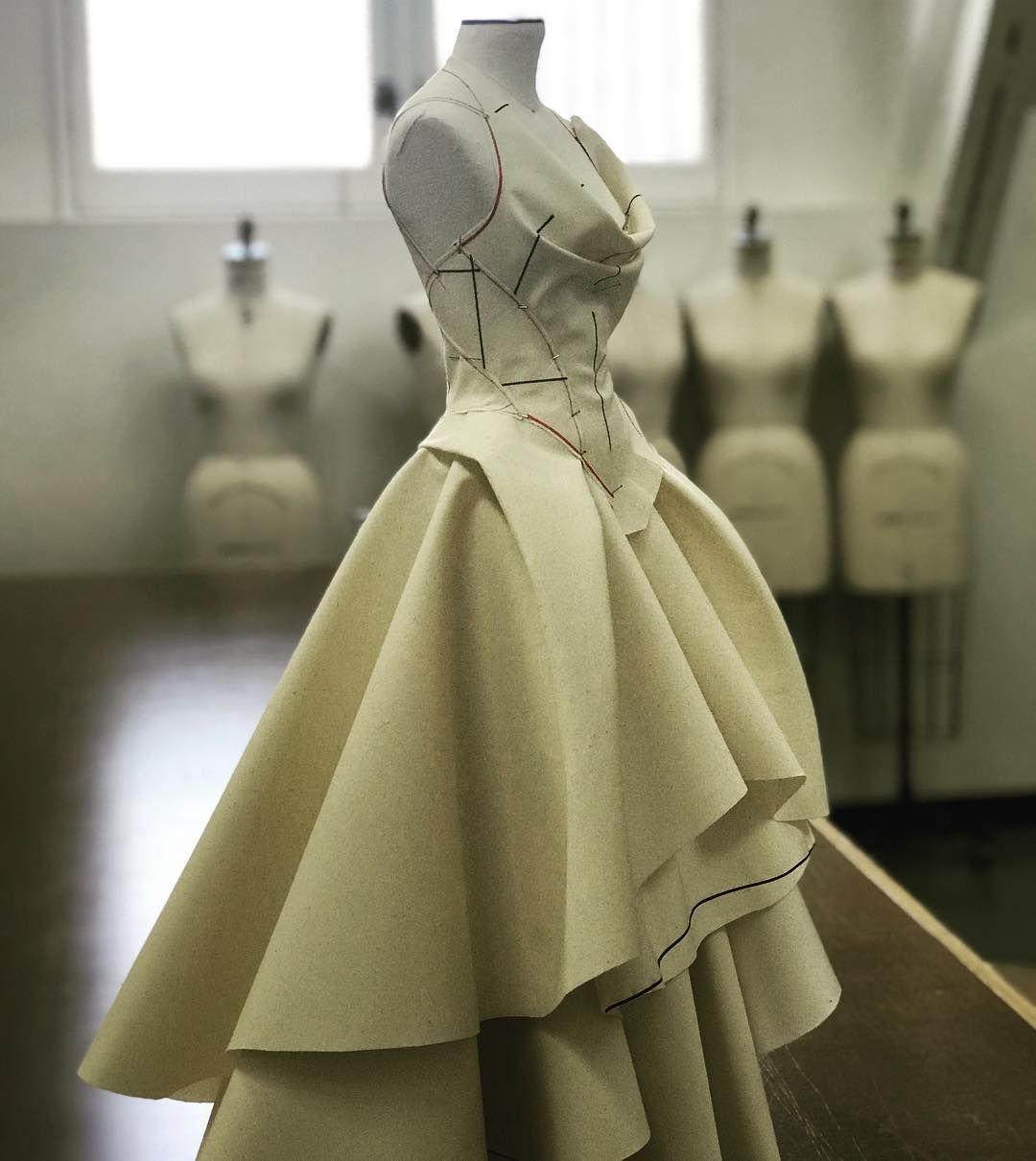 The toile was made, that is, the ghost of a dress in rough calico fabric. It was fitted on a house model, discussed, and changes made. Then the dress was made up in the final material and changed around again. The new collection was shown on models for the first time in front of everyone in the House. Then, Balmain, Mortensen and Spanier went off to a bar to discuss it. Spanier knew what sold best, so her input was invaluable. A few changes might be made then, or a garment or two added.

Made for Each Model

Each garment was made especially for a particular model, so it was nearly forbidden for them to have time off since the dress didn’t look perfect on anyone else. Besides, they received a small commission if someone ordered one of their “numbers”. There were eight house models, so for each show, they did a quick change. They had to model about 20 numbers each. It was a hot and sweaty scramble backstage in the Cabine, with dressers cramming models into outfits. Each model had a hard white chair with her name emblazoned on the back, like a boxer.

The Balmain Couture models did their own hair and makeup. Then they would stand in knickers and bra and put the hat for each look on first. The dresses were so big, long and precious they were stored very high up, on rails in the rafters, and lifted down rustling on poles. Sometimes there were fierce rivalries between them, often over who got to show the best outfits. Everyone wanted to do the bridal look. Though they worked so close by each other, some models didn’t speak to each other for years. No mere mannequins, these women were fundamental to the collection. They were the designer’s inspiration and muses. The clothes were designed around them, and they both wore them for the daily catwalk shows and for press photographs.

At Balmain, the ground floor contained the boutique, with the ready to wear and accessories. On the next floor was the couture business, and it was like stepping into another country. It was sweltering from the tasteful lighting, luxurious carpeting, and all the people who worked there. Spanier describes it as “An atmosphere of sexiness. Overheated, airless, scent-laden, with ladies fainting occasionally, that’s the formula.”

There was a show every weekday at 3pm, which had an audience of between 100-300 customers, fans and curious viewers. There was no charge to see it, and you weren’t obliged to buy anything. You needed to be known to the House or recommended by someone already a customer to be allowed in. The collection was frequently illegally copied, and this was to try and stop other companies from seeing the work. Once approved, you fixed an appointment for a certain day and received your invitation. It must have been wonderful to see the incredible garments close up on those famous models.

The show took two hours. A deuxième vendeuse (Second Seller, assistant to the Premiere Vendeuse) called out each outfit’s number and its name in both French and English in a monotone: “Numero trente-trois, number thirty -three, Versailles”. Balmain chooses the titles and the running order. If he particularly liked something, he gave it a double number, like 33. The audience wrote down their choices on a little card. The collection always ended with the bridal look. The first two shows of a new collection were the most exciting. They were for the press and important buyers and announced by the Directrice herself. Balmain himself looked the models over for these shows before they went out, heaping extra jewels on them and tweaking their hats.

After the show, the audience either left, muttering excuses that they’d fix an appointment another day, or, hopefully, go straight to a changing room. Their Vendeuse would bring the customer’s choices in a messy heap over their arm and often dump the pile of exquisite Balmain Couture on the floor. If she was skinny enough, the customer could try the outfit on. If not, as in most cases, she stuck her arms through the armholes while the Vendeuse held the dress in front of her for an idea of how it would look in her size. Then she would agree on a price and make an order, or perhaps come back, bringing her husband/boyfriend/sugar daddy to persuade them.

The Balmain Couture clothes and models also toured – if somewhere nearby, like Copenhagen or Cannes, this could be done using the same models and clothes. Clothes, models, fitters and vendeuses flew in on a Friday evening, did a show, and were home again by Sunday night. If the invitation was from further afield, like Tokyo or New York, a copy of the clothes was made, and local models found.

Once a customer made the order, it was over to the Balmain Couture workshop. The wonder of couture is that it is totally made to fit. No person has the same body shape as another. No individual body is symmetrical. Couture takes into account every quirk of a person’s body. The fitter pays minute attention to detail, and this means several fittings directly on the client, who must come and visit then stand still for hours having pieces pinned on them.

The seamstresses spent a long time on even the lining of a dress. Beading was done by hand. If a dart looked wrong, it wasn’t unpicked, but the whole dress front scrapped and recut. The colours of the fabric, lining and trim had to match perfectly and were sometimes hand dyed to specification. Each garment was made with substantial seam allowances. This was so it could be let out if necessary. The collections may have been made with new numbers each season, but they were intended to last for a very long time.

When the dress was finished, the label was sewn on – the very last touch. It was packed into an enormous cardboard box. It was never folded but surrounded by pounds of tissue paper. A uniformed man delivered it personally.

A ball dress cost around £1,000 at the time. Every detail of it was carefully priced up, not just the obvious things like the fabric but the hours spent making it, the buttons, the zipper and even the petrol for the van that delivered it. According to Spanier, A Mason de Couture, however Haute, is nearer the factory than the art gallery. However, for Pierre Balmain himself, art was the most important thing, without restriction. His fantasy works were designed and made just how he wanted them. It was for other people to worry about the cost and the practicalities. And that was what Ginette Spanier and her staff did beautifully.