Yohji Yamamoto (b 1943) is a Japanese fashion designer known for his avant-garde ideas and clothing for men and women featuring stark, oversized silhouettes, draping and use of black. His work was brought into the mainstream with his Y-3 collaboration of shoes and clothes with German sportswear brand Adidas, and also his perfumes, which currently number 16.

He himself has described himself and his work as both “playful” and “nasty”, subverting the traditional ideas of Western fashion and in particular ideas of femininity. For example, his 1983 collection he decided to base his silhouette on a pencil case, exhorting women to abandon their eternal search for the perfect body and clothes that would enhance it, instead climbing into a very boxy, rectangular set of layers. He observed that in the Japan of long ago, beauty was found in the nape of the neck and the curve of a back. 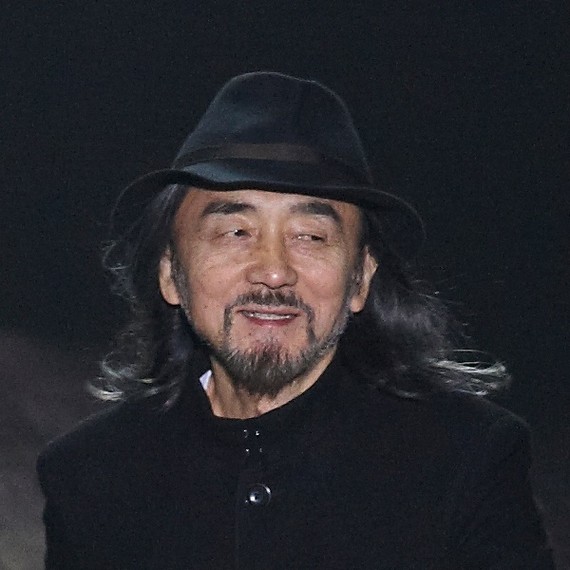 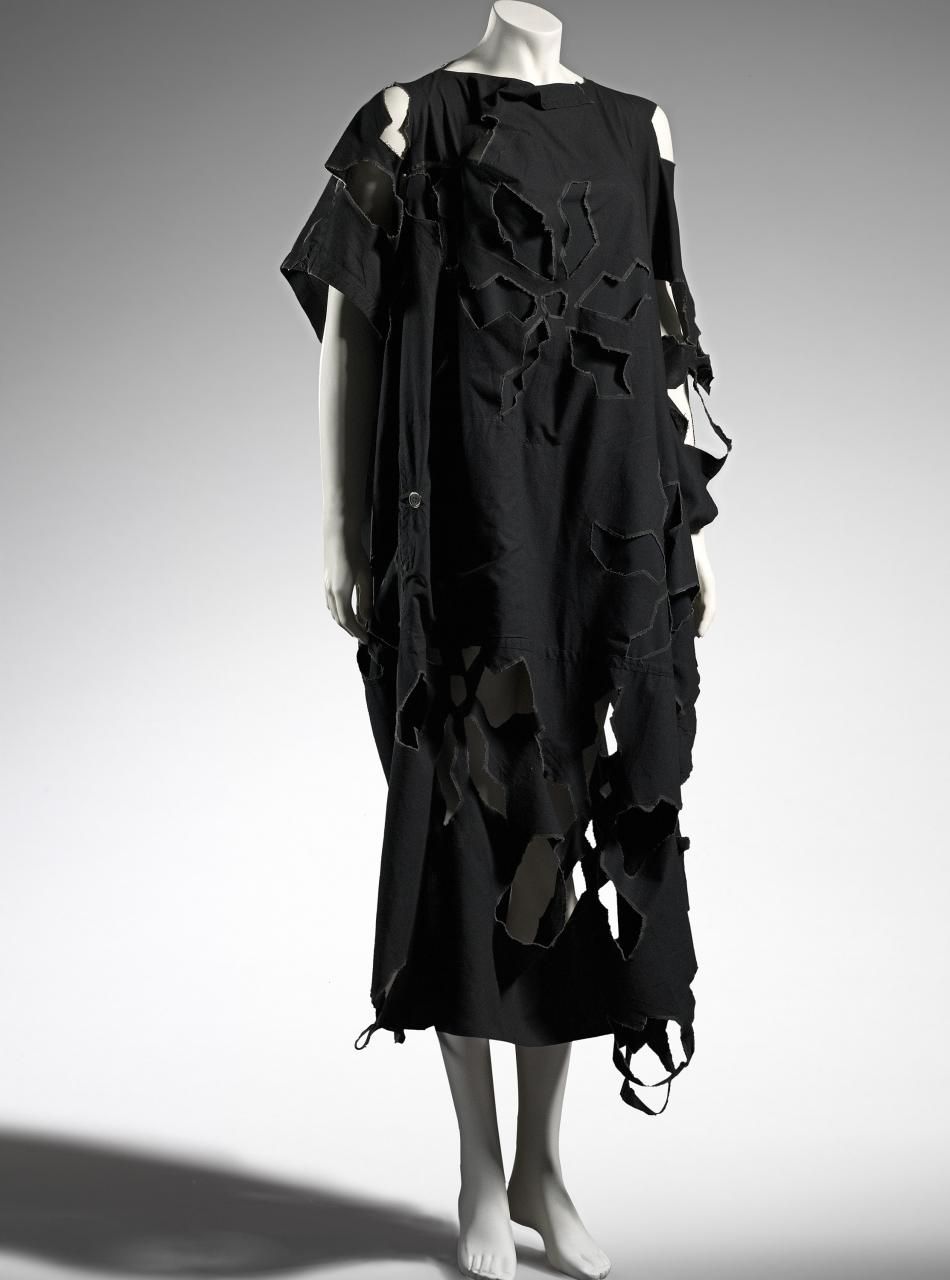 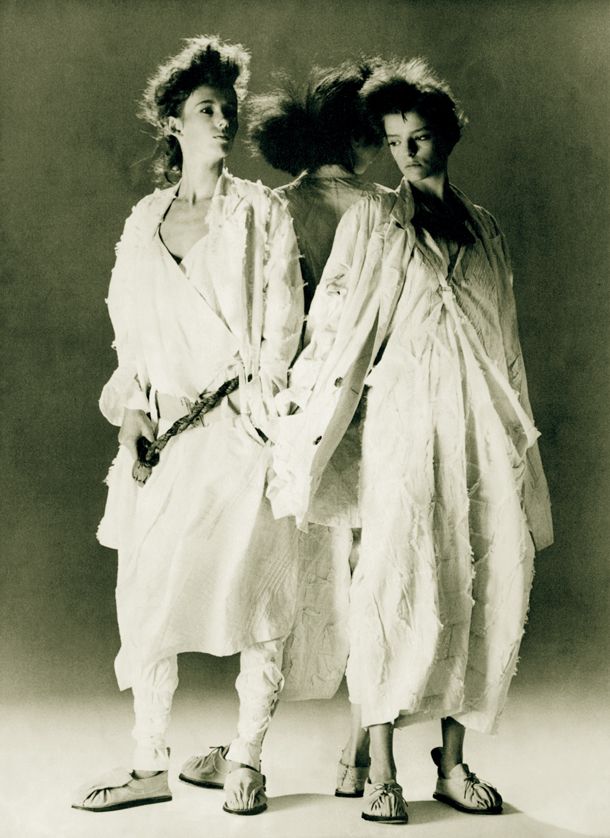 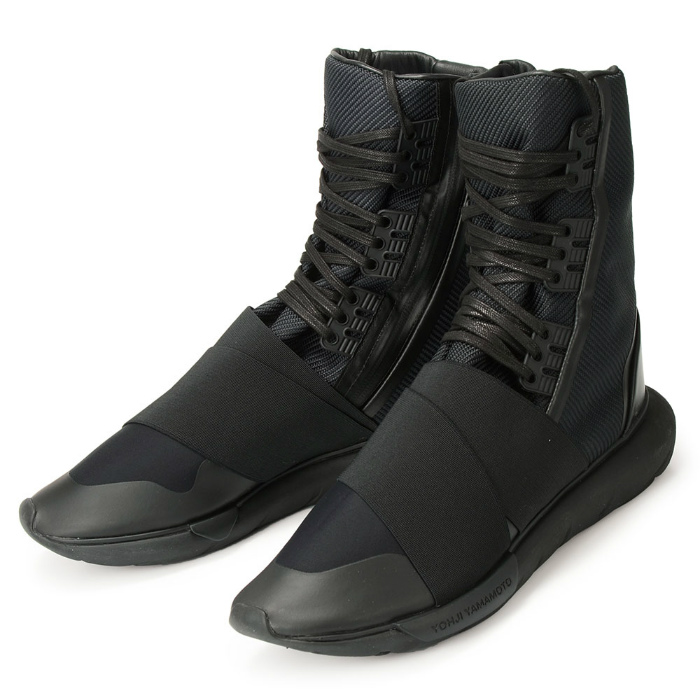 Traditional Japanese clothing, like kimono is based on purely geometric forms regardless of the body underneath it and focuses on the space between the cloth and the body. “It’s when you go to shut a window or door and leave a space. We need this space, so I design space.” Some of Yamamoto’s most popular pieces are kimono-like shirts and trench coats.

Yohji Yamamoto was a war child, born in Tokyo whose mother was a seamstress and whose father was killed in the fighting. “I was born in the ruin,” he explains in the 2011 documentary film Yohji Yamamoto: This Is My Dream.  “I had no memory about Japanese culture because those things were all destroyed. So maybe this is my root, the ruined Tokyo.” 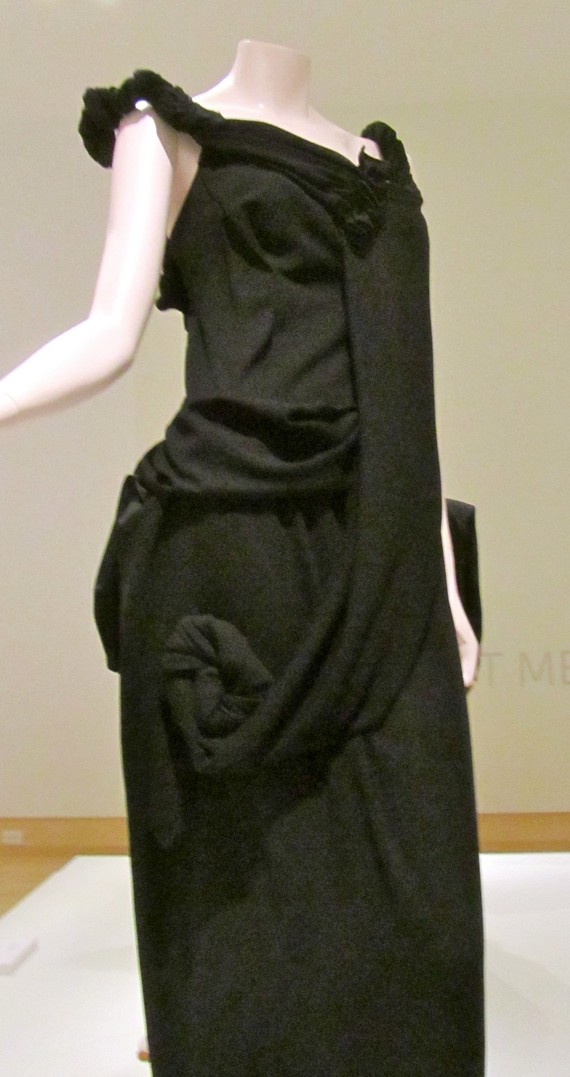 Yamamoto studied law in 1966 but although he completed his degree he decided he didn’t want to practice law. Instead he offered to help his mother in her busy dressmaking business. She curtly suggested he study the subject first, which is how he came to be at the famous Bunka Fashion College.

Training complete in 1969, he helped his mum in the shop before visiting Paris and then creating his first brand, “Y’s” in 1972. The fashion press were appalled by his “Crow Look” and “Hiroshima Chic”, launched at a time of fun, colourful, disposable fashion. However buyers were intrigued, and the myth is that so many rushed to his office to make him an offer that the lift broke down. 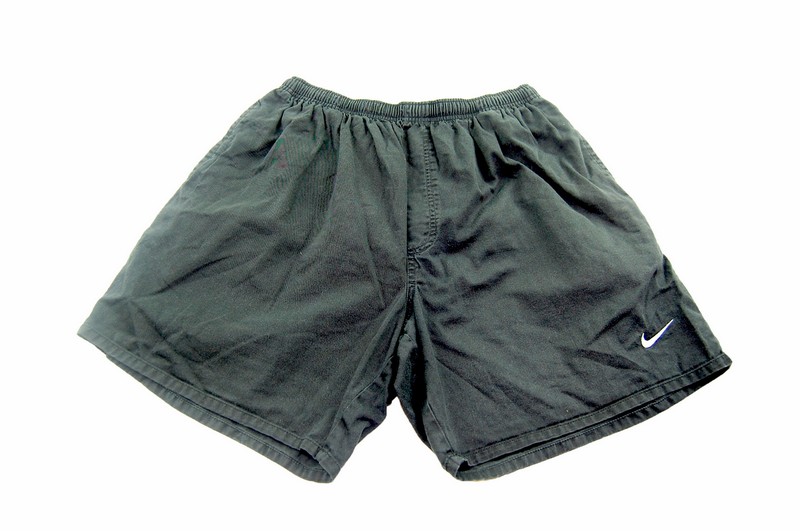 In 1974 his daughter, Limi Yamamoto was born. She is now a designer herself, taking on the name Limi Feu for her label. Critics were alert to the confluences between her and her father’s design style, which she has found frustrating. She has said that it’s 50:50 whether her parentage helped or hindered her.

In 1977 Yamamoto presented Y’s as a catwalk collection in Tokyo and later showed it in Paris.  “When I started making clothes for my line Y’s in 1977, all I wanted was for women to wear men’s clothes. I jumped on the idea of designing coats for women. It meant something to me – the idea of a coat guarding and hiding a woman’s body. I wanted to protect the woman’s body from something – maybe from men’s eyes or a cold wind.” 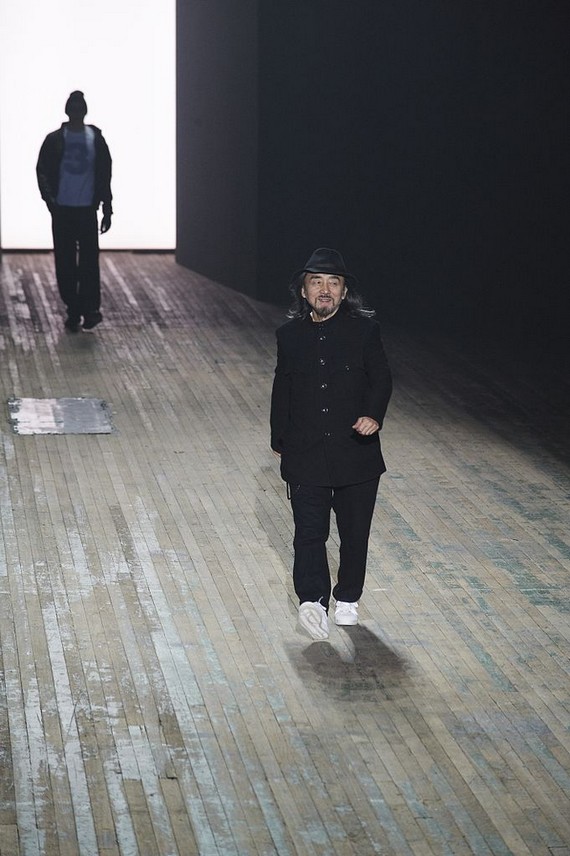 In the 1980s and 1990s Yohji Yamamoto was in a personal relationship with fellow Japanese superstar designer Rei Kawakubo. The press dubbed them “The Monk and the Nun”. Their names were already linked, along with those of Issey Miyake and Kenji Yamamoto as part of the group that was finding fame with an East meets West aesthetic. Fashion followers were excited by their explorations of traditional Japanese dress, re-interpreted to suit Western tastes but with an added twist of looking towards the future and exploring fibre technologies.

In 1983 Yohji Yamamoto talked to the New York Times about his early years. ”I think that my men’s clothes look as good on women as my women’s clothing,” said Mr. Yamamoto. ”And more and more women are buying my men’s clothes. It’s happening everywhere, and not just with my clothes. Men’s clothing is more pure in design. It’s more simple and has no decoration. Women want that. When I started designing, I wanted to make men’s clothes for women. But there were no buyers for it. Now there are. I always wonder who decided that there should be a difference in the clothes of men and women. Perhaps men decided this.”

”I am designing for my generation,” he added, ”but in Japan people are very much seeking the old way of life again. Sexual differentiation in clothing is more important. My major customers there are still the university students. My generation isn’t ready for me yet. They think Yohji Yamamoto is not fashionable enough for them. They will see.” 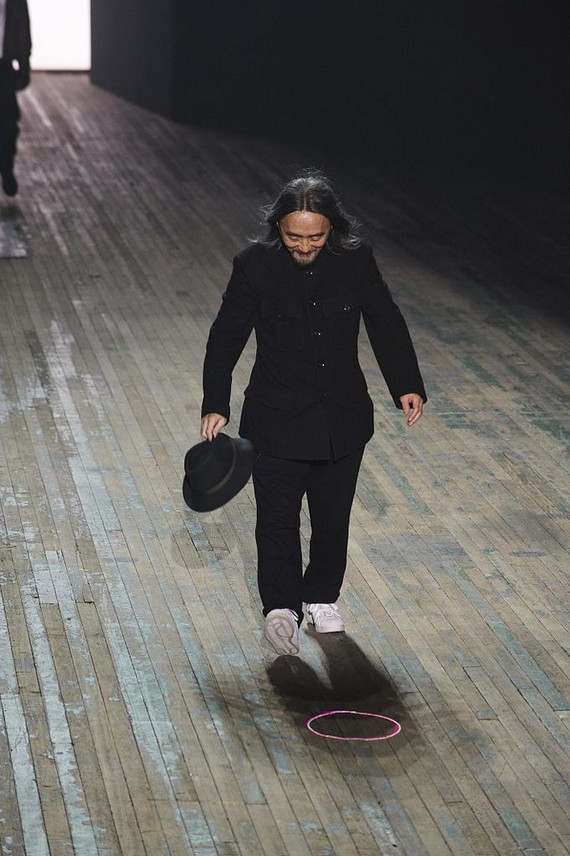 Actually Yamamoto remained very popular indeed with University aged fashionistas, mainly because in 2002 he started a collaboration, Y-3 with sportswear brand Adidas. “The sports world and its technology seek practicality and functionality, attempting to reduce excess, while fashion is seeking the opposite. So together with Adidas, we created something that did not exist before—and completely projected the future.” Explains Yamamoto. This is still a top selling diffusion line.

In 1989, the German film maker Wim Wenders was commissioned to make a film about Yamamoto. At first he wasn’t interested, but then he realised that he could treat fashion as any other art. “The Notebook on Cities and Clothes” was the result, a documentary filmed just by Wenders. The two men are now old friends. 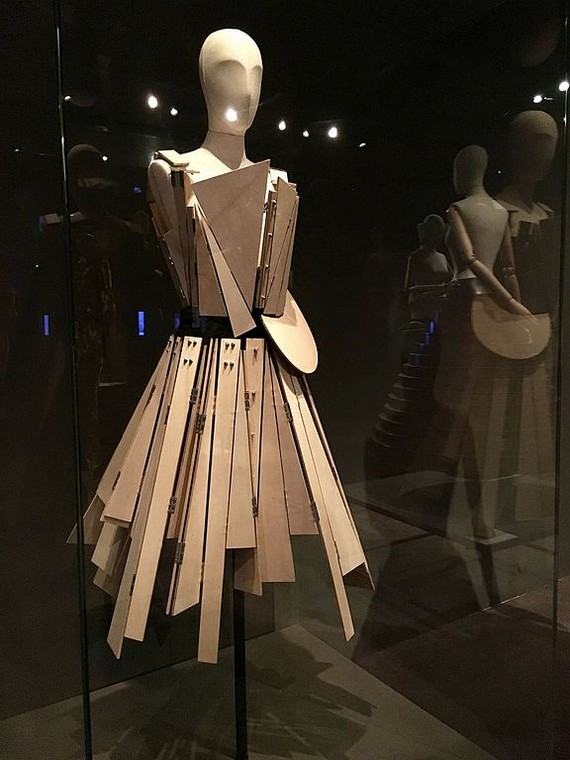 Yohji Yamamoto has also designed for film and opera. In 1993 he created costumes for the Bayreuth Festival version of the Wagner opera Tristan and Isolde.

Making it known that he was a big fan of Takeshi “Beat” Kitano, the director of incredibly bloody (and popular) Yazuka films approached him for costumes. To date Yohji Yamamoto has costumed five films for the director.

For Dolls (2002), which actually wasn’t violent, Yamamoto based his costumes on those worn in Japanese bunraku puppet theatre, and they were beautiful and highly stylised. Brother (2000) The Blind Swordsman: Zatoichi (2003), Takeshis’ (2005) and Outrage (2010) all gangster films, needed some of Yamamoto’s sharp tailoring.

In 2011 the V&A Museum held a retrospective of his work.

Yohji Yamamoto, now over 75, is still working, still getting new ideas. Interviewed by Wim Wenders about the future he said: “I have no imagination about holidays, vacations, or retiring life. I can’t imagine about those things.”