Bunka Fashion College in Tokyo is the one of the most prestigious destinations for fashion study in the world, rivalled only by Parsons School of Design in New York and Central St Martins in London.

Most of the very famous Japanese designers who broke through into the west back in the 70s studied at Bunka, including Yohji Yamamoto, Kenzo, and Junya Wantabe and it’s still producing a roll call of uniquely skilled graduates. So what is it about this famous school and why are aspiring fashionistas from all over the world desperate to get in? 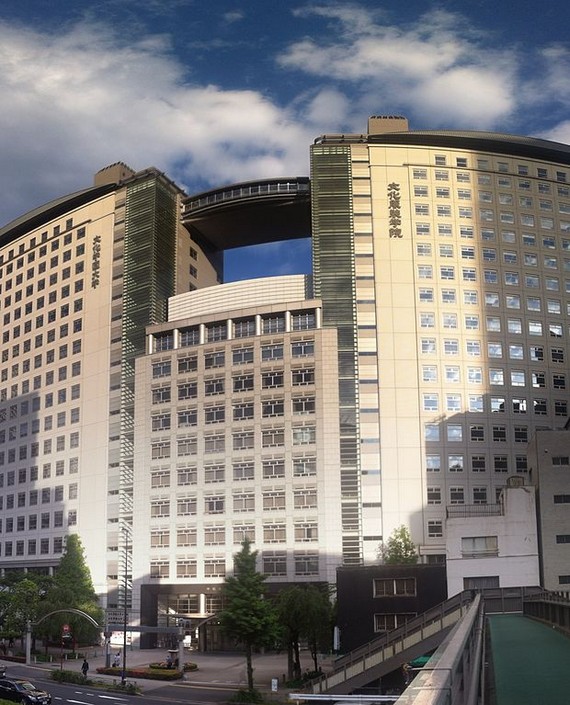 Bunka Fashion College was founded in 1919 by Isaburo Namiki. Namiki, a tailor, held the first classes at his own store, Namiki’s Women and Children Dressmaking Shop. They were intended to teach women to use the new home sewing machines to make clothing for their families.

With the help of Endo Seijiro, who had helped to popularise and distribute the home sewing machine as a time saving device for housewives, the enterprise expanded into the Bunka Sewing School in 1923. From there, it gained the approval of the Ministry of Education as the first dressmaking institution and changed its name to the Bunka Sewing School for Women. In 1936 it became the Bunka Fashion College . In about 1958 the college opened its doors to men as well as women. 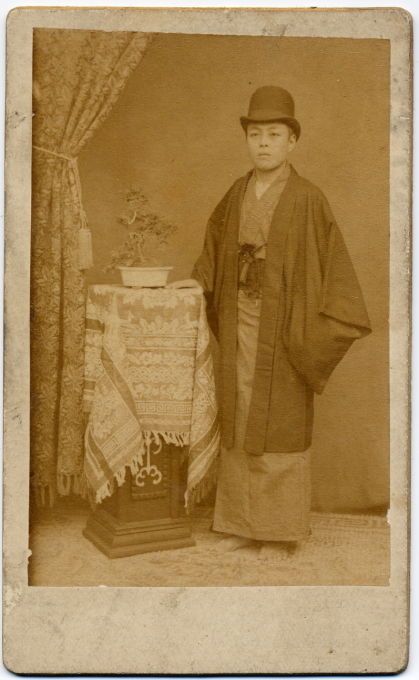 At the turn of the century, Japanese men were crazy for Western clothes. It was the height of chic to abandon your traditional Japanese clothes and wear what they felt was the much more sophisticated trousers, waistcoats and bowler hats of early English and American visitors to the country.

Japanese businessmen wanted their Western counterparts to feel that they were just like them, so they tried to dress the same (although in some cases they ended up retaining part of their traditional clothes and adding Western influences, so a kimono might be accessorised with a bowler hat and shiny patent leather shoes).

Women did not do business and did not leave the home so often, and the Western businessmen did not often bring their wives to Japan. Female travellers to Japan from Europe or America were comparatively rare, so this is why at first, it was male fashions which had the most impact on Japanese clothing.

However, by 1919 this was beginning to change through the import of Western fashion magazines, and more and more Western ladies coming to see this exotic land as tourists. Isaburo Namiki foresaw – correctly-  that this trend was going to continue to grow. So his fashion courses were a way of offering women a way to cope with these entirely new and unfamiliar shapes. But at the same time, he didn’t want Japan’s traditions to be superseded entirely. So he taught women the concepts of Western fashion, whilst retaining a Japanese sensibility.

And that’s what Bunka Fashion College and its alumni are still famous for. Traditional Japanese clothing is designed to lie completely flat, and usually in blocks and squares. It has no stretch and doesn’t fit close to the body but is roomy. It can be made to fit closely once it’s on, for example when a kimono is tied with an obi belt, but the actual kimono is loose and the obi is long. Western fashion tends to follow and highlight the curves of the body, and we have different erogenous zones – traditionally in Japan its the nape of the neck, but Western fashion bares or emphasises bottoms, ankles, legs, bosom, or belly according to the fashion of the moment.

Bunka graduates were always highly sought after in Japan. But they first made their mark on the international fashion scene in the 1970s. When Bunka fashion graduates Yohji Yamatoto and Kenzo Takada brought their East-meet-Wests concepts to Paris fashion in the early 70s, the fashion world, who didn’t know much about Japanese concepts of clothing, found their creations intriguing, desirable, appalling and ridiculous in seemingly equal measure.

For example, Kenzo’s signature oversized smock, which uses the roominess of Japanese clothing alongside the shape of a Western dress, didn’t make sense to American fashion magazines, whilst Parisian students found it practical and charming. 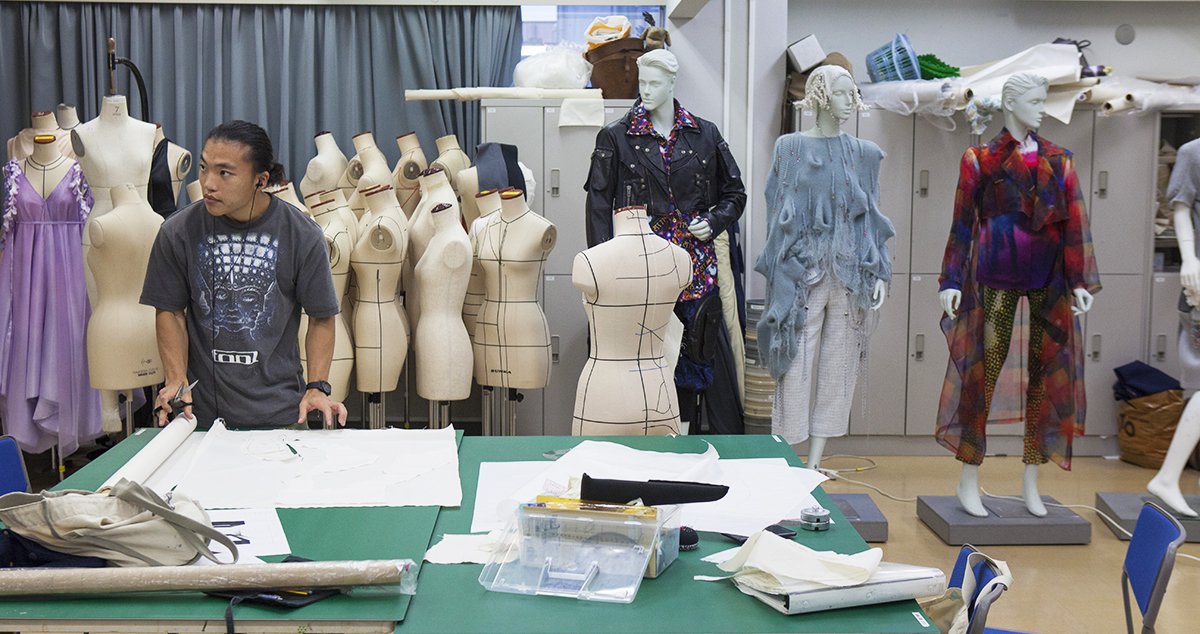 Inside the college. Image via Scoopnest. 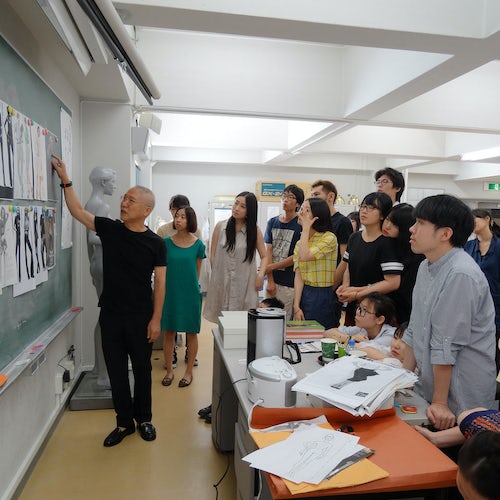 A lecture. Image via Business of Fashion.

Bunka’s training regime is rigorous. Whether students want to learn fashion design, marketing or technology, they all must initially go though classes which teach them human anatomy, drawing and how to construct a garment. Owning a sewing machine is a prerequisite here because just sketching an idea and handing it over to someone else to make isn’t an option. Every year the college has its own well attended catwalk show. Students from every year must get involved in organising it, and become set designers, schedulers, makers and models for the event. Because of this professionalism, the school participated in Japan Fashion Week in 2005 and was the only school to do so.

Students get the opportunity for work placements at international brands, including Gucci and Issey Miyake. It has many cutting edge machines, including several the college has designed and holds patents for itself.

An international reach for Japanese culture

Although it has a global reputation and is open to students of all nationalities, most classes and exams are still held in Japanese. You cannot go to Bunka without knowing the language, which is one of the reasons there is a language institute on campus. Though of course, even native Japanese students will find themselves learning hundreds of new words and technical terms for the fashion world.

Bunka holds exchanges with fashion colleges all over the world, opened an affiliate college, Beijing Fashion College in 1984 and also has affiliated schools in Thailand, India and South Korea.

As its wide variety of fashion programs shows, Bunka College realises that fashion training is not just about learning how to design a new shape of dress. The fashion industry is composed of many parts, and lately has been focused on ecology and social responsibility. Bunka’s students are taught to consider how their creations are produced, including the use of natural resources and labour conditions.

Japan as a country is famous for its cutting edge technology and this aspect of Japanese culture isn’t missed either. The college has a research department which is investigating, amongst other things, a surprising aspect of fashion – it’s health benefits. The Executive Board Director, Dr Satoshi Onuma explains: “We try to emphasize to our students that one person can do nothing on their own. We have also been trying to push into areas of research that will benefit consumers beyond their aesthetic appearance. We care a lot about what we eat, and the air we breathe but not many people worry too much about the clothes that are next to their skin all day long— evidence shows that certain elements, such as titanium, can be good for both the mind and body. This is something we intend to to look into and test in the future.”

Dior and I – Review

The World of Anna Sui