Léonard Foujita (born Fujita Tsuguharu on November 27, 1886 in Tokyo, Japan) was a Japanese painter of determined originality. He moved to Paris in 1913 after his paintings were rejected three times in the salons of Tokyo, and went on to create a fusion of Eastern and Western painting styles that was unique.

His paintings of cats and female nudes were especially celebrated. As well as that, his personal style was instantly recognisable, with a bowl cut, round glasses and pair of gold hoop earrings as well as a variety of eccentric outfits. Brought up by his sisters after his mother died, he was a great lover of women and had five wives. He was the darling of bohemian Paris, though later on fell foul of witch hunts for his part in propaganda paintings on behalf of Japan in the second world war.

Fujita Tsuguharu was the youngest of four children. His father was a military doctor and his mother died when he was five. He had aristocratic ancestry and a priveled upbringing which made him more immune than others would be to the fear of becoming a starving artist, or of adventuring abroad.

Growing up in Tokyo, Foujita wanted to go to Paris to study art immediately he finished secondary school, but was persuaded to stay and study Western style art in Tokyo instead. But after graduating from the Tokyo National University of Fine Arts at the age of 24, his paintings were repeatedly rejected for exhibitions, although the Japanese emperor bought one. Three years later he left for Paris, knowing no-one there. The year before that he had met and married a schoolteacher called Tomiko Tokita, who stayed in Tokyo. He regularly wrote to her, but they were divorced in 1916. Foujita at the beach. Image via Messy Messy. With an unknown friend. Image via Messy Nessy. 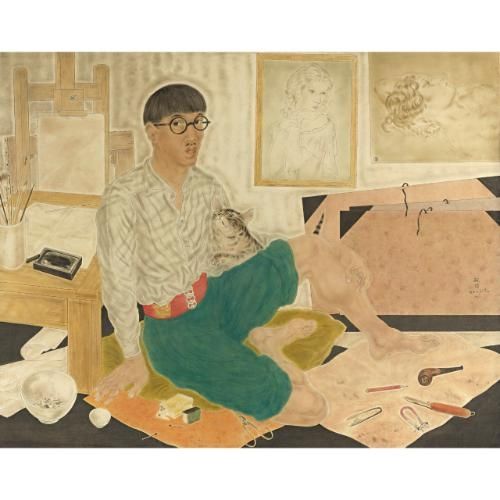 Soon after his arrival he changed his given name from Tsuguharu to Léonard, and also made his surname more French by adding the “o”. Léonard Foujita sidestepped the company of the Japanese master painters who were living in Paris and painting in a traditionally Japanese style.

According to his later stories, Foujita befriended Pablo Picasso just a few days after he arrived in the city of culture, but in fact it was a few weeks later. That’s still impressive. Other friends included Amedeo Modigliani, Pascin, Chaim Soutine, Fernand Léger, Juan Gris, and Henri Matisse. He was quickly taken to the bosom of artistic society, and had dance lessons with Isadora Duncan. With her other students, he dressed in Grecian robes and went dancing in the woods. Diego Rivera painted him in his draperies.

His paintings were celebrated too. He had developed a white oil paint which could be painted over with black Japanese ink, and he used it to create an unparalleled fusion of Japanese and Western art. He began by painting rather whimsical buildings and street scenes, moving on to delicate and playful cats which were well received, and then his greatest success of all, nude women.

In 1917 he held his first exhibition in Paris, and by 1924, was exhibiting with the Fauves at the Salon d’Automne.  That same year, he became an elected member of the Tokyo Academy of Fine Arts. By 1925, Tsuguharu Foujita had received the Belgian Order of Leopold and the French government awarded him the Legion of Honor. 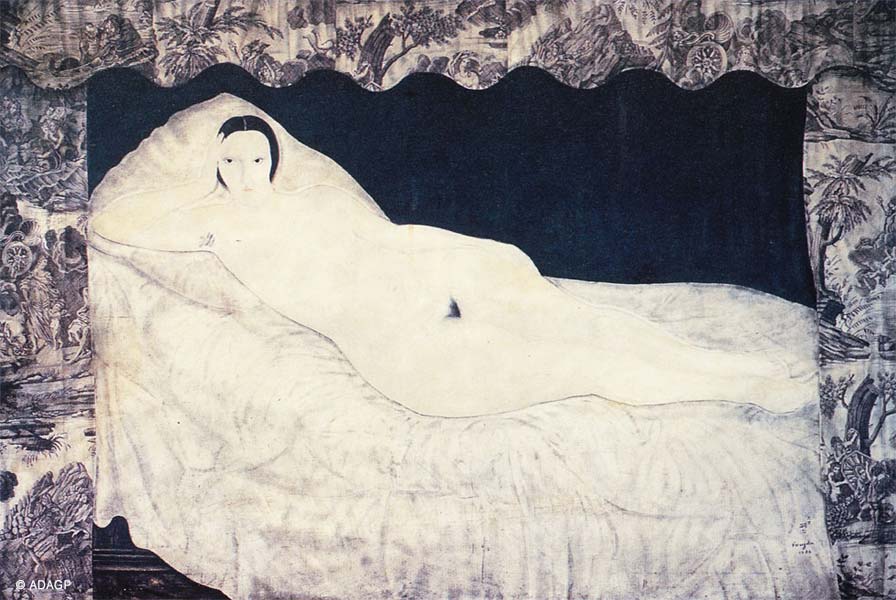 Léonard Foujita made so much money he was able to install a bathtub with running hot and cold water in his flat. This huge luxury attracted models to come and pose for him like nothing else – as you can imagine, sitting still in the nude in a draughty room for long stretches is not at all entertaining, and a bath to warm you up afterwards is very welcome.

Kiki de Montparnasse came among others. Kiki was an exuberant personality in Paris. Man Ray was one of her lovers, though Foujita always insisted that he was not another.

The first day she arrived to pose for him, she was naked beneath her coat, only pinning a small handkerchief at the neckline to indicate a dress. However, she didn’t strip off but turned the tables by sitting behind the easel, and sternly told the artist not to move. By the time she had completed the portrait she had sucked and bitten all of the artist’s pencils, lost his eraser and trodden a packet of camembert into the carpet. She got up, demanded (and received) her fee and went out with the drawing under her arm, promptly selling it to a rich American in the café next door. The next day she returned and allowed him to paint a portrait of her.

Kiki was unrestrained and posed nude outside in Foujita’s courtyard as well as indoors, and her pale voluptuousness was the perfect inspiration for him. One portrait of Kiki, entitled “Reclining Nude with Toile de Jouy,” was a huge hit at the Salon d’Automne in 1922, fetching over 8,000 francs. In 2013, the painting sold at Christie’s in New York for $1,205,000. 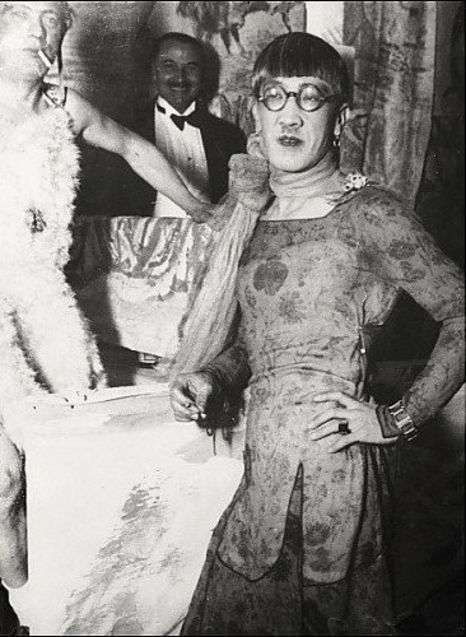 Léonard Foujita loved costume balls, which were all the rage, and devised his own outfits for them. From his schooldays also liked to dress in drag, with Geisha outfits being a particular speciality. He also appeared in public in women’s underwear and nothing else. He had a watch tattooed on his arm and bought a Rodin statue to use as a hood ornament on his car.

His look was so well known that a Paris shop commissioned store mannequins in his likeness.

Latin America and back to Japan

By the 1930s Léonard Foujita had run through two more marriages and was in Latin America, travelling, painting and exhibiting. In Buenos Aires 60,000 people saw his exhibition and 10,000 queued for his autograph. In 1933 he came back to Japan, where his celebrity was much diminished and people thought he was a bit full of himself. He became an official war artist, a role he has since been castigated for, though some feel that his paintings of the “glories” of war were so gory as to be in fact criticisms.

In 1955 he returned to France and became a French citizen. His last major work was at the age of 80. He designed the architecture and decoration of the the Foujita Chapel in the gardens of the Mumm champagne house in Reims, France, completed in 1966. In 1968 he died, and was buried in France. In 2003 he was reinterred at the chapel as he had wished.