Whenever you think of Ginger Rogers you think of Fred Astaire, for they were a formidable pair, their dancing partnership so famous, they remain forever etched in our memories. Those pictures in black and white, Astaire in a black and white tux and Rogers in a flowing gown and feather cape, just divine. Caught in mid-flight with arms outstretched, Rogers’s gown hovering above her ankles, is still such an evocative image.

Ginger Rogersmade over 70 films, her most memorable ones being musicals, usually with Fred Astaire, her dance partner. However, her Oscar award was won for a role that did not include any dancing at all, and is testament to her acting ability as well as her singing and dancing. 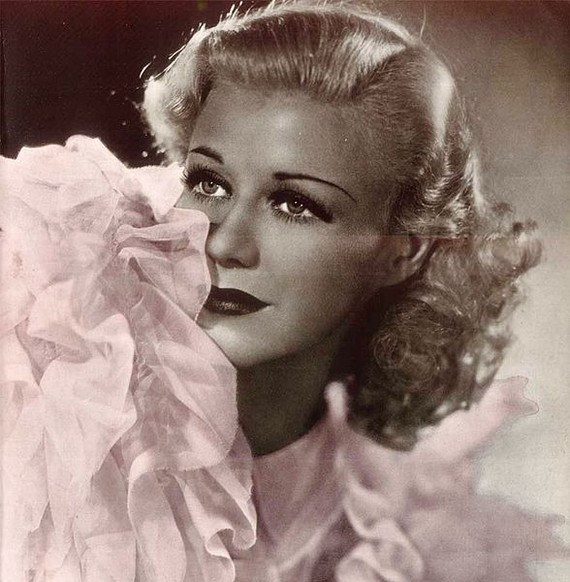 Ginger Rogers started dancing from a young age and at 14 won her first competition at in Texas when she took part in their Charleston Championship. From there she would eventually enter the film world, starting off in some modest films including “Top Speed” at the age of 18, which got her spotted by the Gershwin’s and a role in a Broadway show “Girl Crazy.”

Three years later Ginger Rogers would make her very first film with her future dance partner Fred Astaire, and the rest we know. She was a great dancer and she chose her costumes well. She favoured long dressed that skimmed the floor, even to dance in, she loved those that shimmered and so metallic colours would often be chosen, such as gold and silver.

Costumes for day, night and dancing

For daytime costume wear, there’d be plenty of collars, capped sleeved, high waisted shorts and knee length hems and larger floppy hats. Peter Pan collars were popular and often came with capped sleeves, with the collar coming in a different colour to the rest of the dress or blouse.

Ginger Rogers’s dresses were sometimes in chiffon as well as shimmering materials, and there’d often be some ruching and beading. Short capes of fur and feathers would top things off nicely with matching satin shoes.

Accessories were everything in the thirties and forties and Ginger Rogers paid careful attention to hers. Hats were pillbox with appropriate embellishments, with hair grips to hold in place. Shoes often had a peep toe and short Cuban heel.

Ginger Rogers’s hair was a miracle in itself and even if you’re not keen on the dresses (why ever not?) then you can aim to recreate her wonderful hairstyles, for imitation is the greatest form of flattery.

There were many different styles and were usually up does that required waving and curling, investing in some good quality setting lotion and hairspray might be a good idea. One style which involved a lot of plaiting, waving and teasing into shape was created especially for Ginger Rogers film “Follow the Fleet,” which was so impressive, the hair stylists at RKO gave it its very own name – the “Golden Plaque.”

If you don’t have the time for such high maintenance hair, you may be relieved to know that Ginger Rogers favoured more conservative hair styles once the late thirties approached, with sleek bobs and side partings, which suited her perfectly. This can be achieved with a little patience, a hair dryer and a good pair of straighteners, or if you prefer, some tongs. 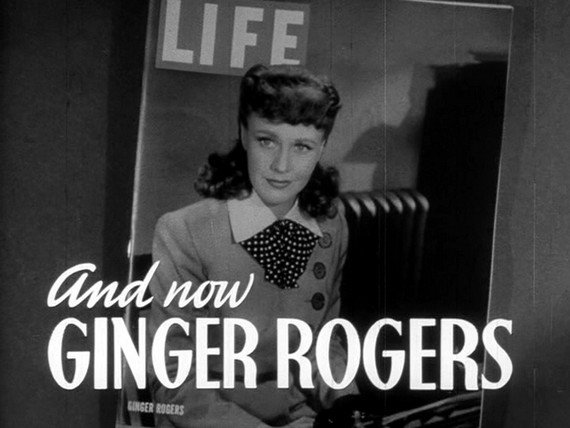 Make up and Cupid Bow eyebrows

Ginger Rogers’s makeup was suited to the thirties and came with full lips and pencil thin eyebrows. This isn’t necessarily something you may want to copy as eyebrows are notoriously hard to grow back once they’ve been plucked that much. However, this isn’t about copying Ginger Rogers’ style to the letter.

There are many aspects of Ginger Rogers’s style that can be adapted to contemporary looks and given your own individual stamp. Day time dressing is probably easier to achieve, but her “dancing” evening look is definitely full on glamour and to achieve takes time, patience and dedication.

You can seek out dresses from the high street or from a reputable designer, but as we all know, vintage is the way to go. Trawl your local high street vintage stores and online. Tell the shop owner what look you’re trying to achieve and he/she should be able to help you. You don’t have to struggle, anyone who’s into vintage will have some knowledge of movie star styles if they’re worth their salt.
Good luck and have fun!

as the leading lady in Top Speed 1929