Stephen Tennant was the most delightfully fey, flamboyantly stylish, and gleefully “himself” person. He took the job title of “idle rich” to extremes, spending most of his life in bed, but he did this in gold-dusted, finger waved hair and Charles James satin leopard print pyjamas.

The inheritor of a large estate, Stephen was immortalised in several books, ardently photographed by Cecil Beaton and famous as the lover of Siegfried Sassoon. But most importantly he did not give any figs whatsoever what anyone else thought of him, pursuing his eccentric love for dress up right up until he died at the age of 81, and shrugging off any homophobic slurs as entirely unimportant. He had magnificent, irrepressible charm. 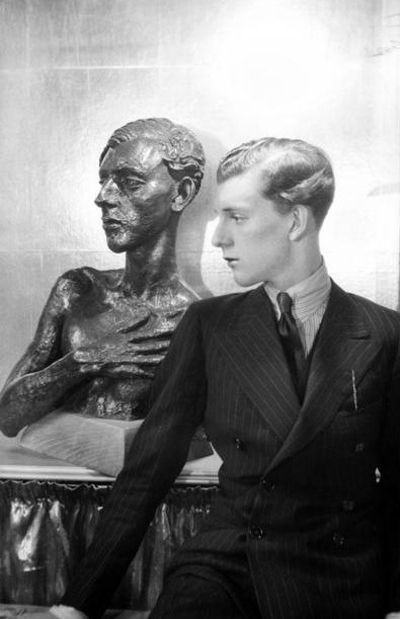 Stephen Tennant with his bust by Jacob Epstein. Image via Pinterest. 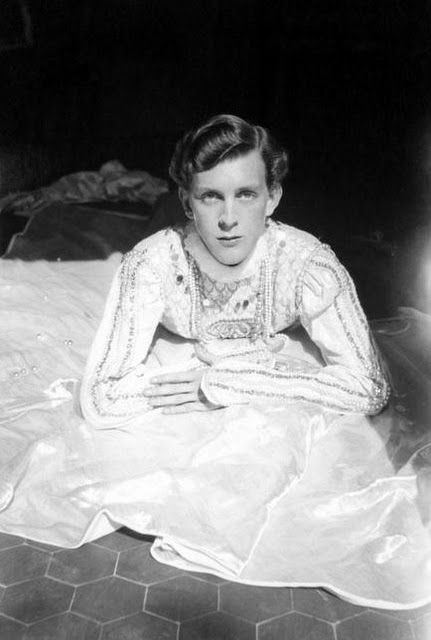 The Wyndham Sisters by John Singer Sergent. Image via The Grand Ladies.

Stephen James Napier Tennant (21 April 1906 – 28 February 1987) was born in Britain. His mother was already famous. Pamela Wyndham was a writer and editor and owned a private art gallery. She was the centre of an artistic and literary social circle known as “The Souls”, which stood for equality of the sexes and free love and friends with Edward Burne-Jones, Oscar Wilde and Henry James.

Her sisters were equally famous and together, they were said to be the “centre of cultural and political life in late Victorian and Edwardian Britain”. The Wyndham sisters were painted by John Singer Sergent.

Stephen’s father was Edward Tennant, the 1stBaron Glenconner. He was a Scottish Liberal politician and Chairman of the Union Bank of Scotland. He was chairman of a number of companies and head of a chemical company in Glasgow, inherited from his father and the source of his wealth.

A Large and Wealthy Family

Stephen was the youngest of five siblings. Clarissa, known as Clare, was a socialite who shocked society with her numerous romantic liaisons. Edward was a war poet who was killed in the first world war. Pamela greatly mourned him, and wrote a biography about him. Christopher inherited the family wealth. The model Stella Tennant is his granddaughter. David was also a socialite, who founded the Gargoyle Club in London.

The family lived in Wilsford Manor in Wiltshire. When he was four years old, Stephen, running in the garden, noticed the beauty of a pansy blossom and stopped in his tracks. Thirty years later his ability to be overwhelmed by nature hadn’t changed – he only consented to a car ride through the countryside with a friend on condition his eyes were bandaged in case the passing scenery made him giddy.

As a child, Stephen was carefully protected and cossetted, and with good reason. He had tuberculosis, so was often very weak. As a result, he missed a lot of school as he had to spend long periods in bed, resting. He was also sent to the Meditteranean to take recuperative sea air. He did recover but the illness is one of the reasons he was so strikingly beautiful as a young man. It imparts a very pale, translucent skin, with a fever bloom to the cheeks and bright sparkle to the eyes, and causes most sufferers to be very thin. Stephen himself announced that he had a “fatal gift of beauty”.

Another gift he had was in painting and sketching, at which he was talented but didn’t develop. He did spend years in attempting to write a novel,  Lascar: A Story You Must Forget, which was never finished.

Cecil Beaton was probably the one to encourage Stephen in the idea that his real purpose in life was now to do nothing more than lie around and stun people with his gorgeous good looks. Certainly Beaton photographed him lovingly over and over in languid poses – sometimes set up studio shots and sometimes candid photos when he was with the gang. 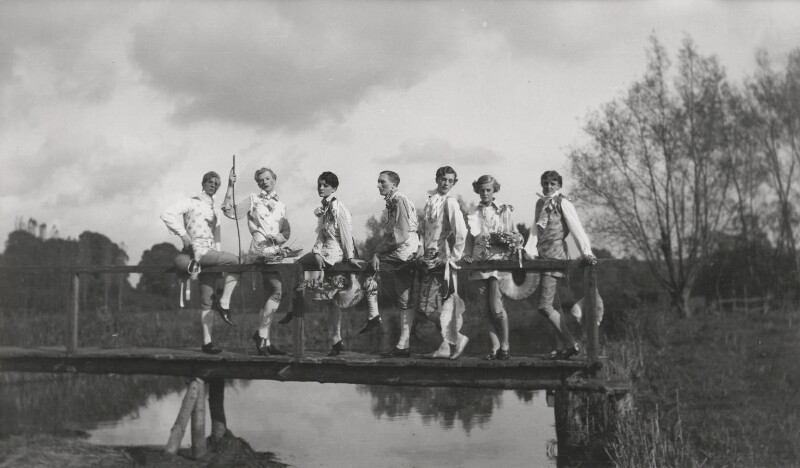 Cecil Beaton and His Friends by Cecil Beaton. Beaton is on the far right, Stephen Tennant is third from the left.

“The Bright Young Things” of the 1920s and 30s were a group of socialites who specialised in looking beautiful and partying hard. They included Evelyn Waugh, whose character Sebastian Flyte in Brideshead Revisitedwas basically Stephen, Nancy Mitford who wrote Stephen into Love in a Cold Climateas Cedric Hampton, The Right Hon. Elizabeth Ponsonby, Brenda Dean Paul, the painter Rex Whistler and the poet Siegfried Sassoon. The society columns of the newspapers and magazines of the times were brimming with excitement over what The Bright Young Things had been up to. “Stephen Tennant arrived in an Electric Brougham, wearing a football jersey and earrings” panted the Daily Express in 1927, reporting on a party. “London’s Bright Young People have broken out again” was the headline later that year, for a ball in which Stephen appeared as the Queen of Romania.

Stephen has been described as “the Brightest of the Bright Young Things”, but possibly he was just the vainest and the one to thrust himself the furthest into the limelight. “My tongue is already flickering like an adder, lest one iota of foreground is denied Me,” he said, when it was suggested he be included in a group photograph. 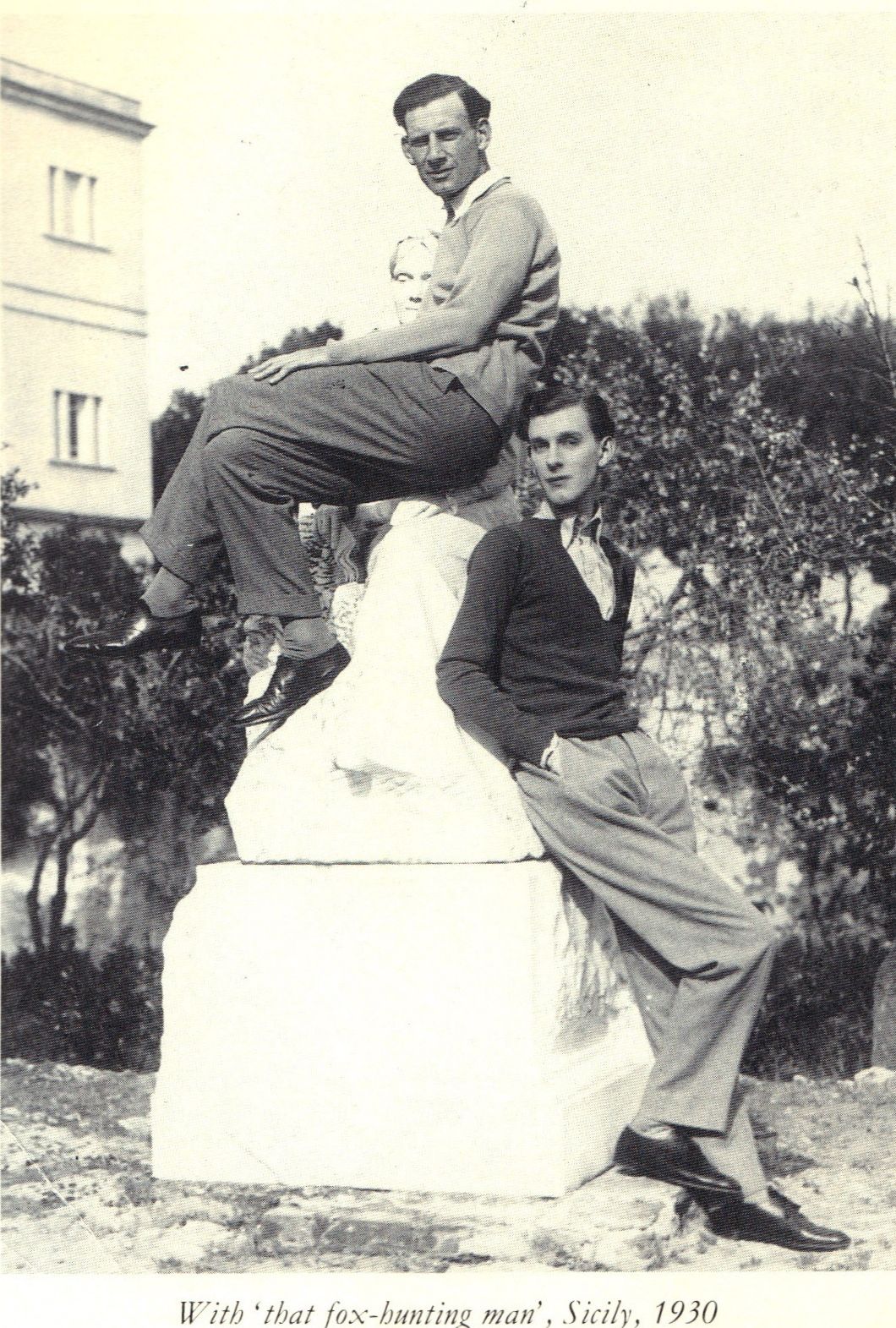 Most photographs of Stephen show him as an androgynous beauty, with perfectly cut suits set off with a touch of lipstick and immaculately waved hair. It’s a look which anticipates Quentin Crisp in the 1950s and Jarvis Cocker in the 1990s – the original gender fluidity which makes all boys and girls swoon.

About that. Stephen did plan on marrying a woman once upon a time, but the engagement was cut short when he outlined his plans to take his nanny on honeymoon. After that he was the devoted companion of Sigried Sasson for many years, though many of his friends expressed incredulity that he “was capable of the physical act”. One day, however, he cut the relationship off without warning.

Stephen Tennant – an eccentric to the end

Stephen lived until he was almost 80, and in later years retired to his childhood home, Wilsford Manor. He decorated the house and grounds in fishnets, gilding and a lot of pink. He is said to have rarely left his bed in the last 17 years of his life, though he entertained vistors from it. There were, however, notable sightings of the Lord of Manor as he popped down to the local village in tiny pink hotpants or a tablecloth for a skirt.