Noël Coward is known as the epitome of style and is a very glamorous gay icon. It’s not hard to see why the Guildhall Art Gallery decided to build an exhibition around this aspect of the writer, performer and singer. However, it becomes a bit of a stretch at times. All the same, Noël Coward: Art & Style is a charming exhibition, containing some excellent artefacts and biographical information about the man. Separately, if slightly irrelevantly, there are some lovely fashion history pieces here, such as an original Lucile opera cloak from c1920 which is exciting to see very much up close. It highlights the work he did with women and black men, who, while they already worked in a theatre setting , were very seldom credited. 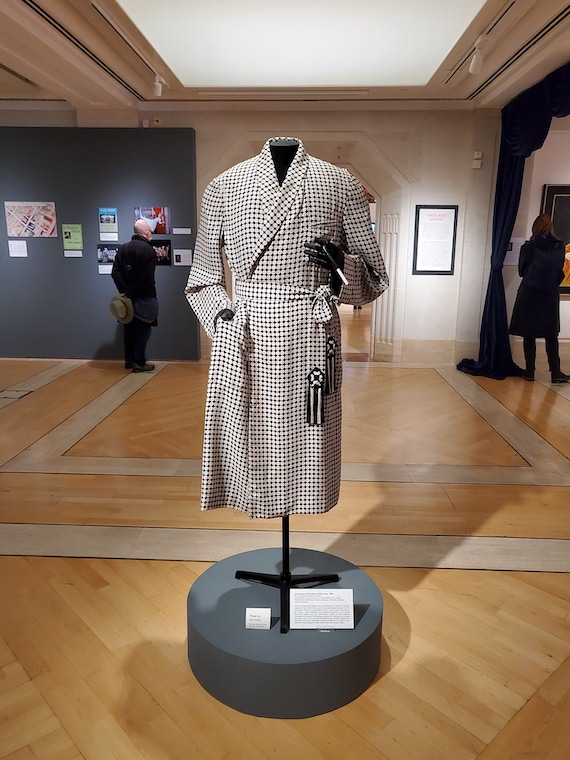 Noël Coward: Art & Style begins with Noël Coward’s childhood, family, and early days as a child performer. He was born in “genteel poverty”, as he himself said, and though the family had little money, his mother loved the theatre and she took him with her as often as possible. She also encouraged him in his career and totally supported him. As an adult, some of his publicity photos are staged in her spare bedroom. He dressed up the room with lavish drapes, and installed himself in the bed, papers spread all around him, telephone clamped to his ear, dressed in his signature dressing gown. In this way, he propagated his image of being frantically busy, yet amazingly relaxed. This is success on all measures – hardworking yet perfectly unruffled with it, like the proverbial swan gliding serenely across a lake while paddling hard beneath the surface.

A Child Performer who Grew up to be a Star 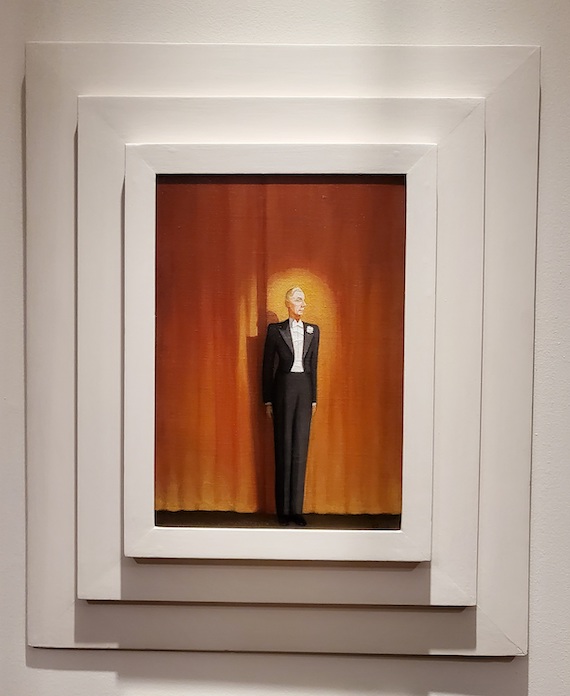 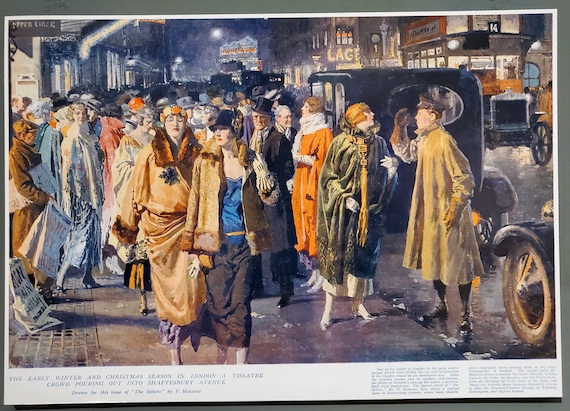 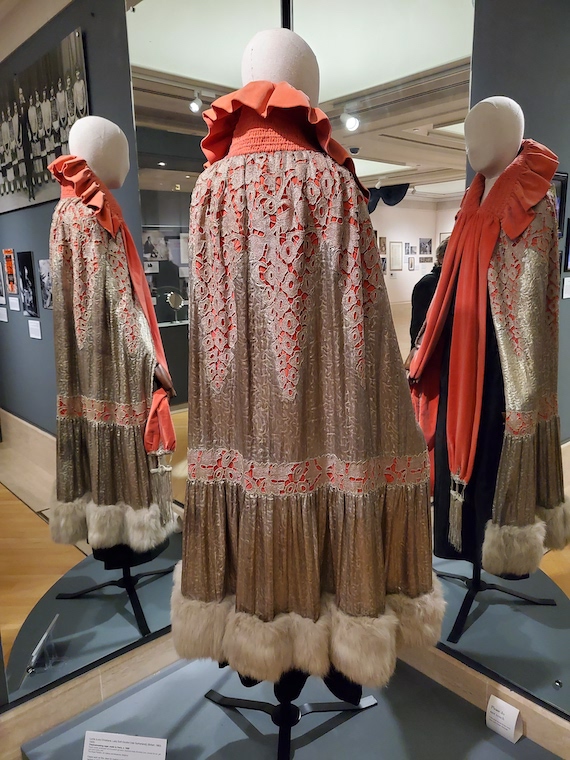 His early success as a young performer lead him to try his hand at song and sketch writing too. This allowed him to collaborate with costume and set designers. Very soon, these were luminaries of couture like Molyneux, Norman Hartnell, and Victor Steibel. There is an original sequinned Molyneux dress from the mid-1930s here, along with a lovely pair of lounge pyjamas by Lucien Lelong, which is a costume for Charlot’s Revue of 1926. Also a reconstruction of a satin, bias cut slip dress from worn by Gertrude Lawrence in Private Lives in 1930. This dress cause a style stampede and was much copied.

A small Gluck painting is featured, from a series she did on his shows. The panel introduced Gluck rather fulsomely – interesting information for those who don’t know their work, but a little bit of a sidestep from the subject. Perhaps this is intended to amp up the queer aspect of the exhibition. Another weak link is the Lucile opera cloak – it’s shown next to a print of an illustration of theatre goers leaving a show, dressed in a rainbow of these lavish velvet styles ad directing their chauffeurs. It shows how Piccadilly would have looked at the time, which adds colour but isn’t really directly related to Coward’s own art and style.

The exhibition often refers to Coward’s “chosen family”, whom he was very close to, as well as his birth family who he was close to as well. His chosen family include his staff, and his secretary Cole Lesley kept his papers and later wrote a biography of him.

The exhibition includes two oil portraits of two of his lovers, Graham Payn and Louis Hayward. Coward was gay at a time when it was illegal, and his presentation has, of course, a campnesss to it. Cecil Beaton, who was big fan though he had written a horrible review of one of his plays related meeting Coward on a cruise ship shortly after the review was published. Coward tried to make friends with Beaton, and gave him some sartorial advice: it was to be dapper, but less conspicuously camp. Beaton ended up working on some stage designs from Coward, but never, I think, quite got over his jealousy of him. 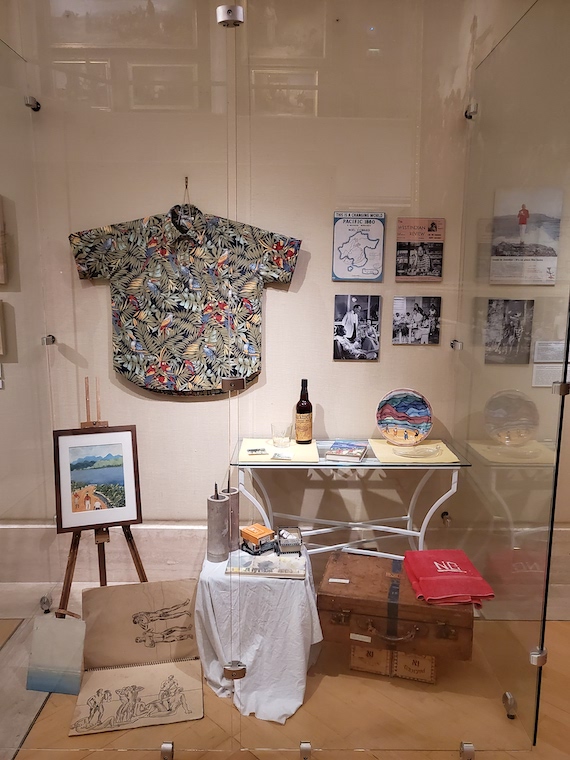 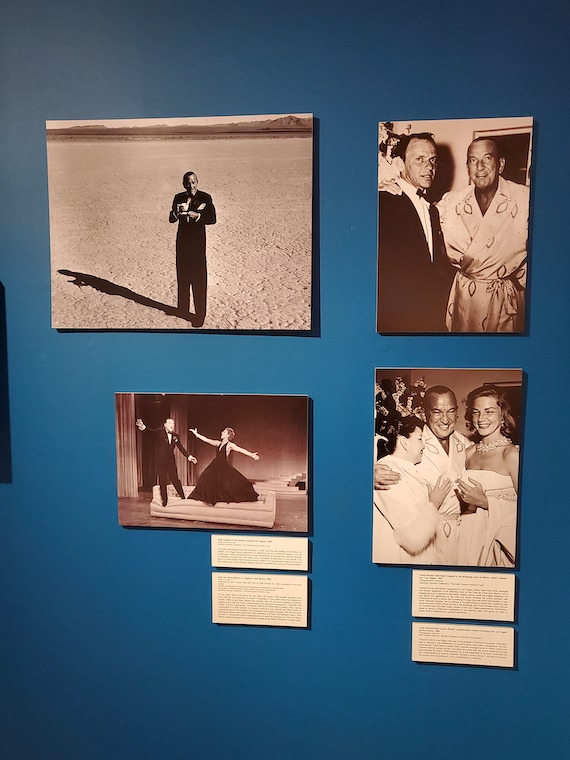 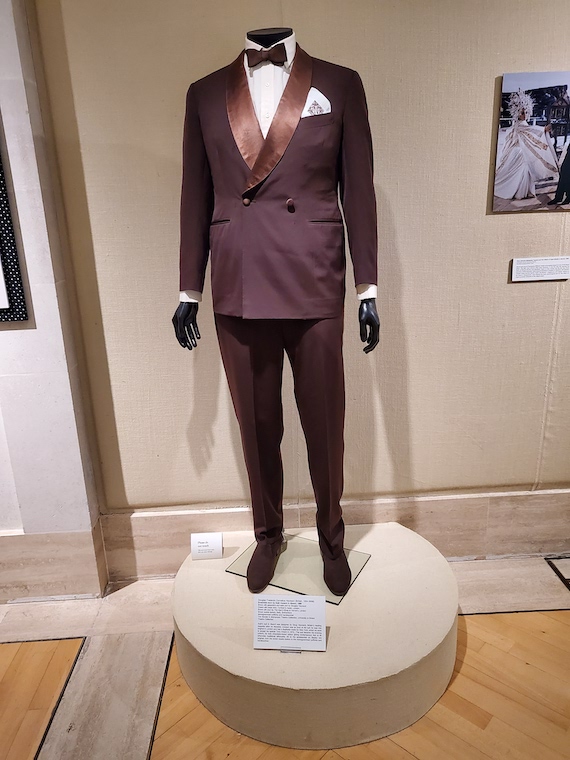 But it comes across that Coward was a kind man, and possibly fun to work with. He worked closely with a charity to which he paid more than lip-service. The Actors Orphanage were children who were possibly made parentless by the war, but more likely illegitimate children from performers. He not only supported them finically, but also, on the threat of WW2, had them evacuated to Switzerland, where he owned a chalet, Chalet Coward, where they all lived in luxury for the duration. So he personally made sure that they were safe.

As well as Switzerland, Coward also had a home in Jamaica. In Jamaica, he was a Sunday painter and here are some of his Hawaiian shirts along with his quite terrible watercolour sketches. Besides being nice places to escape, they were also tax havens. Which was part of the reason why Britain ended up rejecting him and he lost popularity there towards the mid-century. Also, his style in all senses had become a little passé. No matter, America welcomed him. There are photos of him with Frank Sinatra, Marlene Dietrich and Mae West. And a wonderful image of him in a dinner suit with a cup of tea. To them, he was the ultimate Englishman.  Later on, towards to 70s, he filmed in Capri with Elizabeth Burton and Richard Burton in a very crazy caper called Boom. 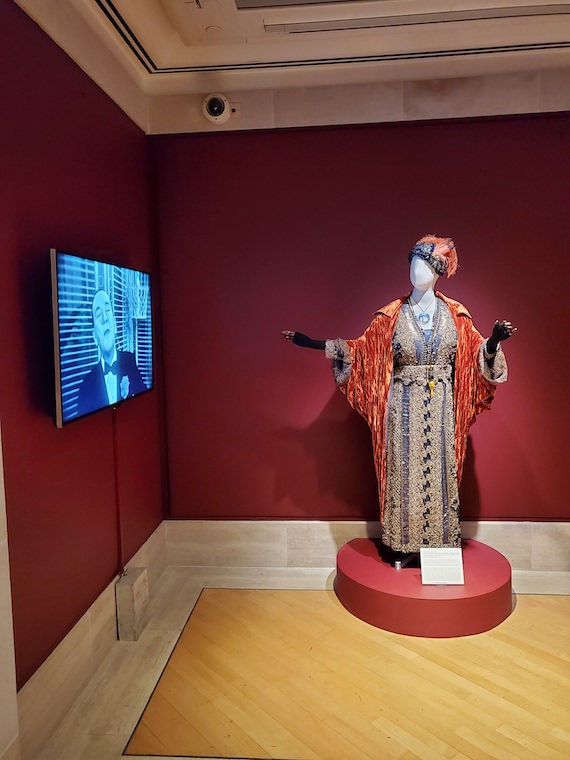 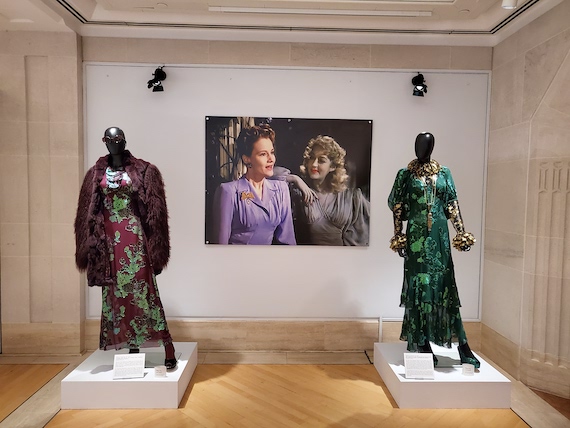 Finally, the exhibition comes to the influences after his death. A company made some nice dressing gowns in the 80s. And Anna Sui was inspired by the costumes of Blythe Spirit for her AW17 collection. There are also some of the costumes from the 2020 film version of that play, including Judi Dench’s lovely 20s style ensemble as an over-the-top spiritualist, Madame Arcati. Finally, and rather charmingly, there is a stereoscope showing mostly Coward’s holiday snaps on a loop. Though the photos I glimpsed are nothing special, the technology is quite startling. Overall quite a mixed bag, but I enjoyed it.