One of the things which makes vintage clothing so lovely is often the quality of the craftsmanship, and the vintage fabrics used to make it. Turn even a workaday suit from the first half of the 20th century inside out and you will see the layers of fabric, interlining, lining and padding that has gone into it, often hand-finished.

The fabric for something like that would be a pure wool, and while the lining might be rayon rather than silk, both will have stood the test of time. I have suits from the 1940s which are such good quality they look like couture. In fact, it can cause a great disappointment when you look through modern examples today, searching for a replacement.

To be clear, these garments weren’t cheap, costing a good chunk of a person’s monthly wage. But they were made to last, and meticulously taken care of.

I mentioned rayon earlier. People are often surprised when they realise how long ago artificial vintage fabrics started to be investigated and invented. Rayon was invented in 1880 by chemically reducing tree bark to a liquid goo which was then extruded into filaments like the fibres in wool or cotton. In fact, the same person, Joseph Swan, actually invented the process for a carbon filament for light bulbs, but realised how huge the market for an artificial fibre could be. It was commercialised in 1905.

Nylon came along in the 1930s, and was widely taken up in the war when large quantities of fabric were needed very quickly for parachutes and ropes. Its advantages for things like stockings and women’s underwear was really a happy side discovery. Polyester was introduced in 1941. 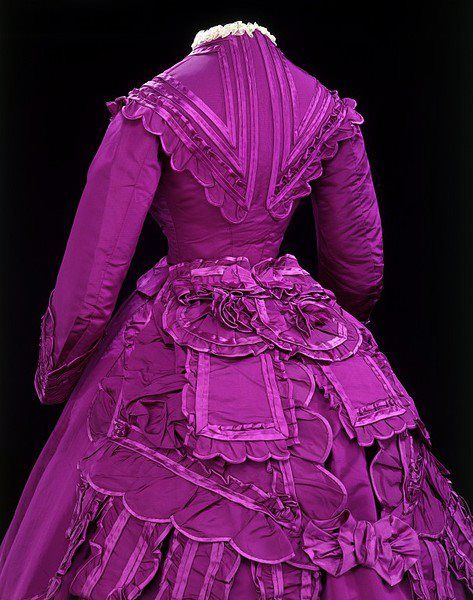 Very bright. This silk dress is dyed with aniline dye. Image via Pinterest.

Similarly with colour. Artificial dyes have been around for even longer. Synthetic dyes were discovered as a by-product of medicine in the early 19th century, and by the 1850s there were a wide variety of shades commercially available. They were very punchy colours. Jacqueline Durran, the costume designer for the recently released Little Women remarked that the director had queried a “neon” scarf one of characters wore, feeling it period inappropriate. In fact, she says, “I do think the Victorians were brighter than we thought they were.” The Vintage fabric dresses we see in museums are very faded but primrose yellow, bright green, scarlet and deep purple were popular. 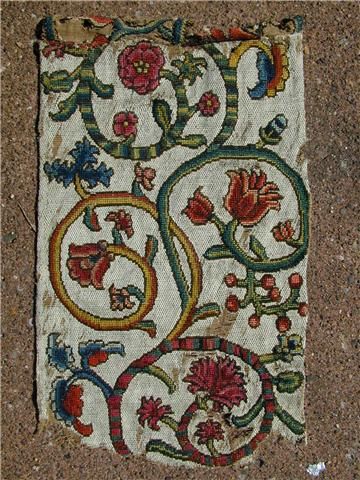 Elizabethan fragment of about 1580, showing stylised flowers. Image via Pinterest. 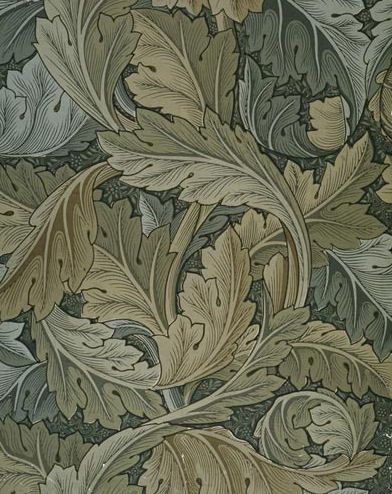 Since then, colours, fabrics and prints have come in and out of fashion. Floral motifs have always been popular. Ever since the Elizabethans celebrated their carefully nurtured gardens flowers of all shape, colour and size have appeared on fabrics. So have leaves, buds, seeds, and even insects and fruit and vegetables. Other creatures from the animal kingdom have proved equally popular. Birds, snakes, roaming deer, foxes, monkeys and elephants have all sparked the imagination of textile designers. William Morris in the 19th century was particularly fond of a natural theme, and his designs of leaves and birds were revived in the 1970s. The combination of artificial fabrics, synthetic dyes and bold imaginations around that time created some very bright colours and distinct Vintage fabric designs. 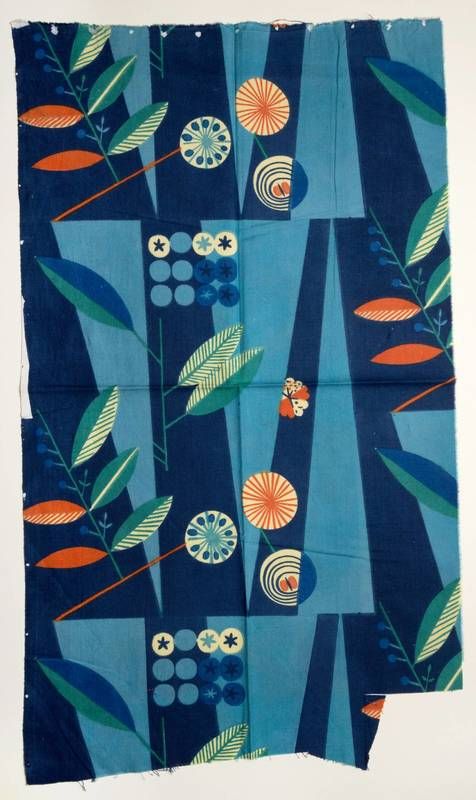 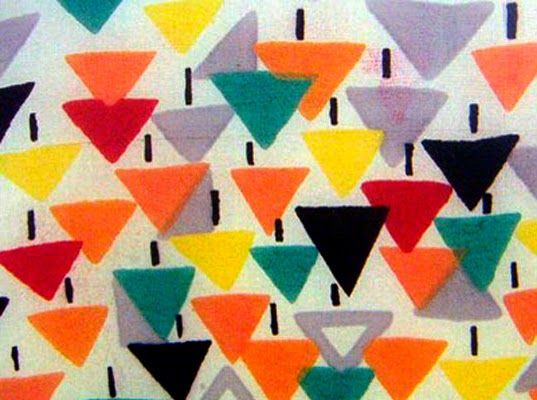 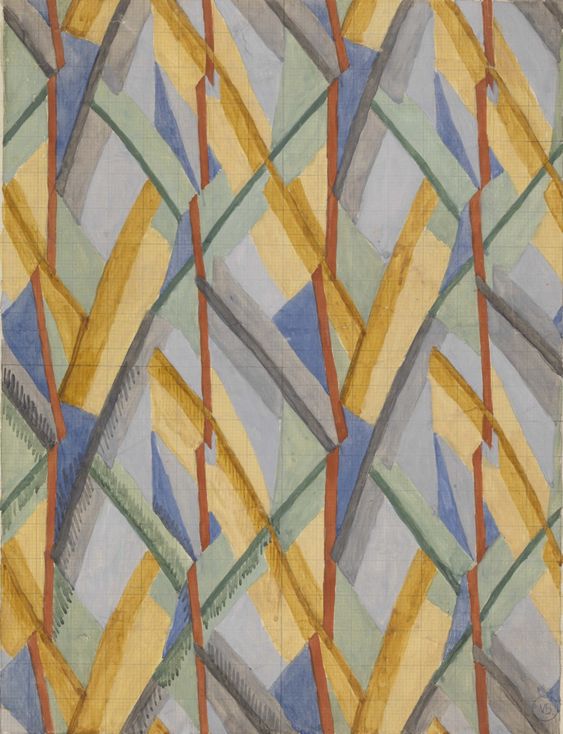 A fabric design from the Bloomsbury Group: Vanessa Bell for Omega Workshops, 1913.

But vintage fabrics designs need not be based on the natural world. Stripes, the simplest geometric design, have been around for perhaps as long as fabric have been produced. So have checks and tartans, formed by setting up stripes in both the warp and the weft of the fabric. This can blossom into chevrons (V-shapes or zigzags). Although in weaving the lines that form the designs naturally come out straight, if a designer is creating a pattern for print it need not be.

The Wiener Werkstätte (Vienna Workshop) was founded in 1903 and was famous for its progressive prints. They were an alliance of artists and designers.  Their aim was to explain that design and applied arts, like fabric design and weaving, were just as much of an art as painting.

In the 1920s there was a vogue for geometric print designs both based on lines and the natural world. Over in Paris Sonia Delaunay, had a bright palette and clear, clean lines.The Bloomsbury Group in London created their prints and paintings with signature dull colours and complex lines. 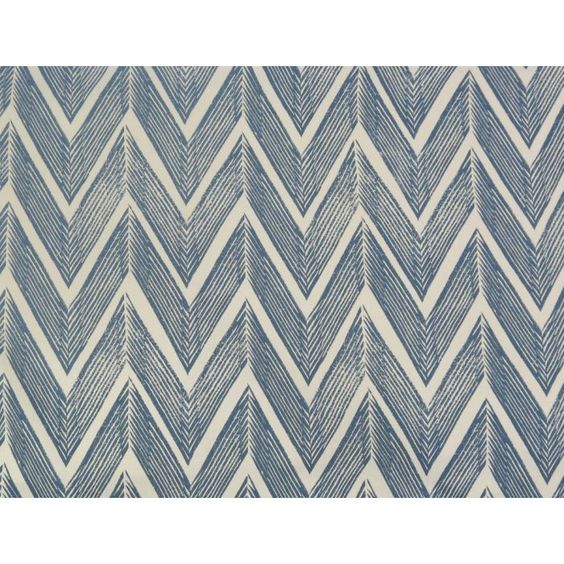 During the war, it was important to make vintage fabrics designs in practical colours with small repeats of the pattern. This was so fabric wasn’t wasted in pattern matching. Using just a couple of colours meant that they were cheap to produce. Enid Marx was one famous designer who created for the Utility Scheme. But even she found that that limited palette was not congenial. She had to stick to rust, green, and blue and cream. Marx complained that that rust was “most deplorable and responsible for much of today’s low standards of public taste”. 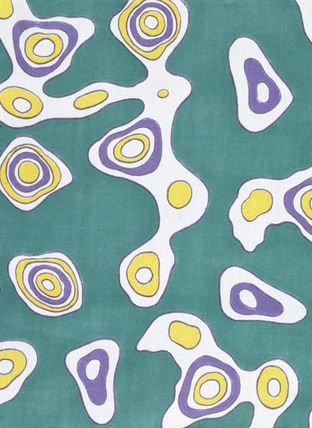 This fabric was designed by S.M.Slade for British Celanese Ltd for the Festival of Britain Crystal Design. Screen-printed rayon. UK, 1951. Image via Pinterest.

By the time the Festival of Britain came along in 1951, people were really ready for change. Design began looking to the future and the space age. The natural structures discovered under a microscope became a fascinating inspiration.

Dating a Garment made from Vintage Fabrics


Looking at the fabric a garment is made from is one way to date it accurately. Take into account the colour, print and type of vintage fabrics. This as well as things like the type of zip or button and of course the shape of it, means you can see what decade clothing is from. The best way to get an eye for this is to visit lots of museum collections. Alternatively have a look at the way vintage shops classify them.